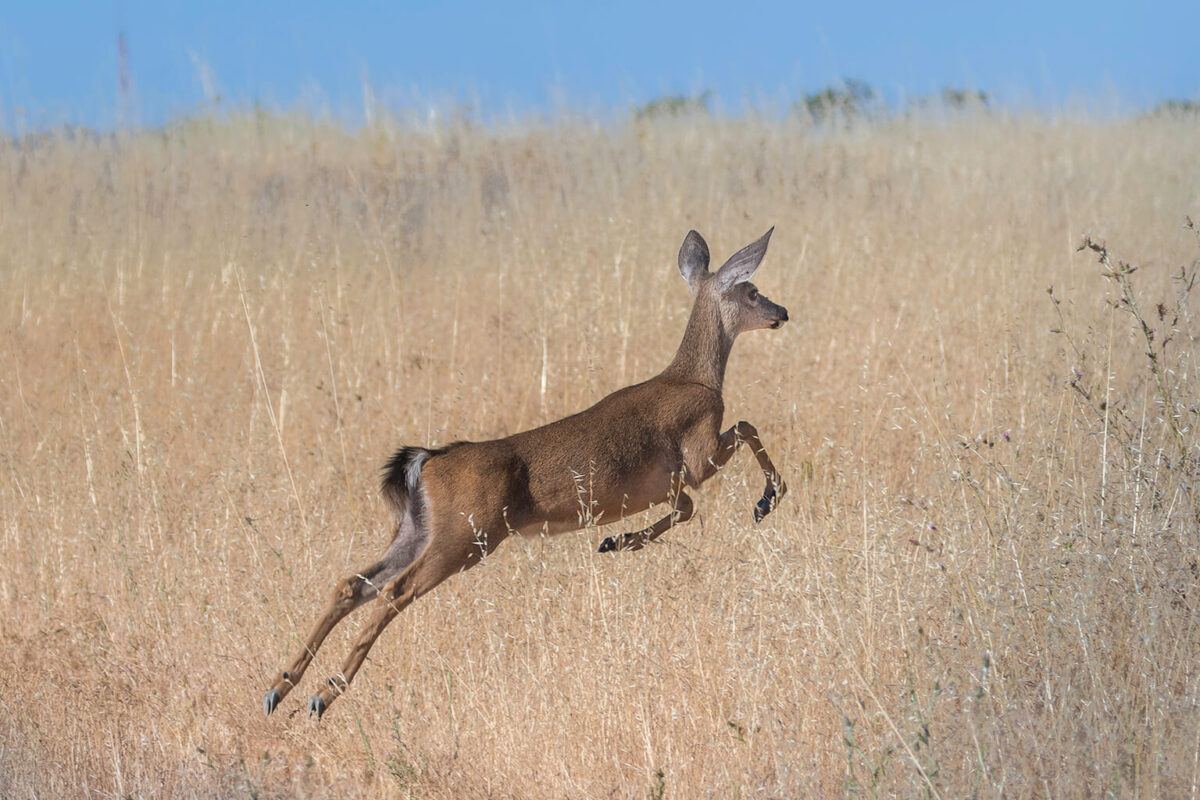 In addition to those creatures that can actually fly—birds, bats, insects—there are a number of animals that leap in the air to momentarily defy gravity. These airborne aspirants launch themselves for a variety of reasons: to hunt, get over barriers, escape prey, efficiently get from place to place or perhaps, simply, for the joy of it. These momentary bursts are difficult to capture photographically, requiring a combination of a ready camera, a fast shutter speed, patience, preparation, stealth and a fair bit of luck. Check out these spring-loaded Peninsula critters capable of catching air and consider pulling out your camera for your own leap of faith. 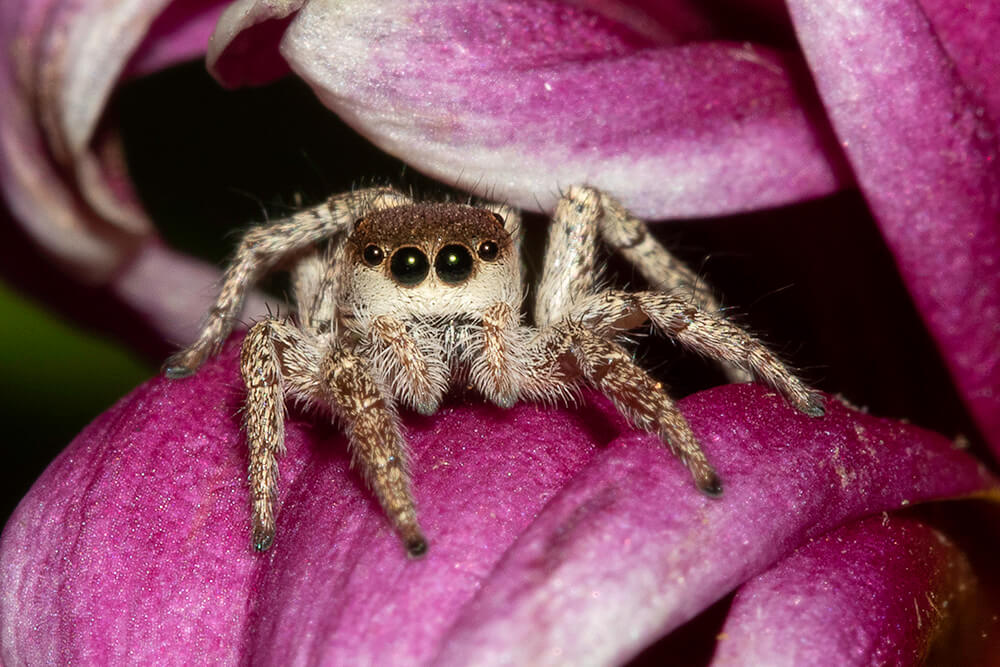 It is hard to imagine a charismatic spider until you meet jumping spiders in the family Salticidae. With their large eyes, expressive faces and distinctive personalities, these small predators have acquired a sizable fan club. Add in diverse and distinctive coloration and fabulous mating dances, and I always jump at the opportunity to snap their portrait. 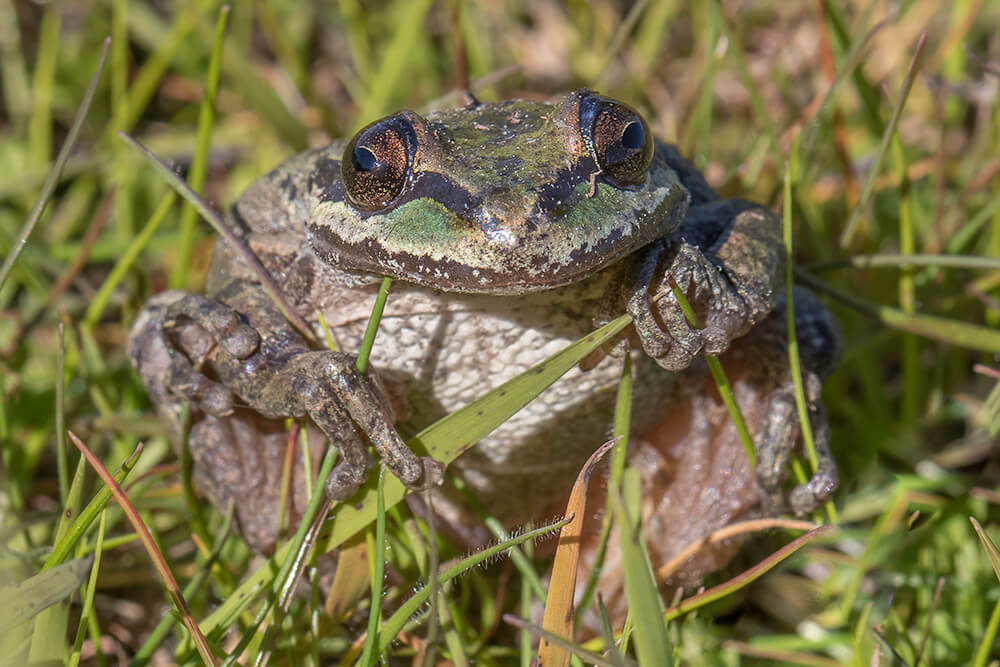 The Sierran tree frog (Pseudacris sierra) is much more frequently heard than seen. Not only can it detect when someone is approaching and become silent, but it is also a bit of a ventriloquist. However, if you imagine where frogs might want to be, you may find them near ponds or under logs. I encountered this specimen near Alpine Road in Portola Valley. 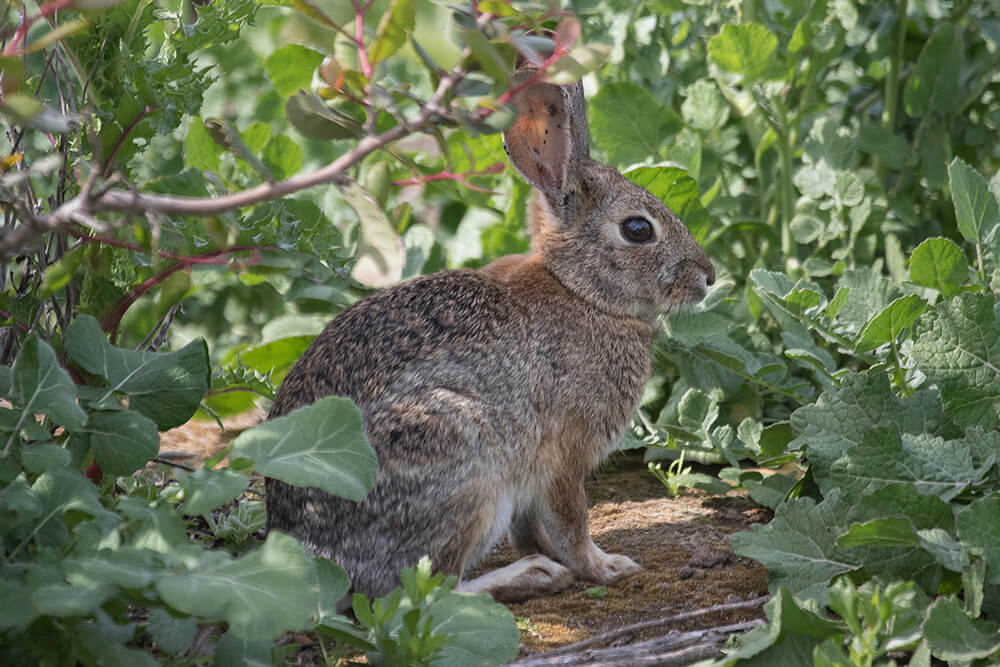 The desert or Audubon’s cottontail (Sylvilagus audubonii) is a member of the Leporidae family of mammals including rabbits and hares. This charming bunny is found in Peninsula Open Space parks along with its close relative, the brush rabbit (Sylvilagus bachmani.). Cottontails use their jumping skills primarily as a way to escape predators and they seem to have a great many—including snakes, raptors and coyotes. 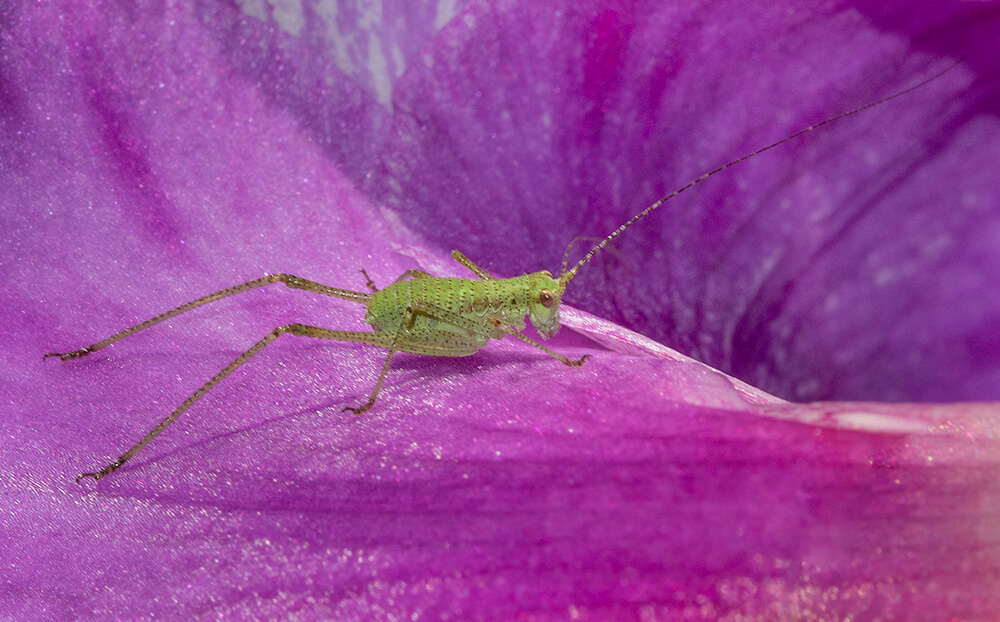 This Mediterranean katydid or bush cricket (Phaneroptera nana) can be found in local gardens and parks. This specimen was spotted in Eleanor Pardee Park in Palo Alto. The incredibly long hind legs are adapted to leaping, although it also has wings that may resemble a butterfly in flight. Unfortunately, it is an invasive species and can be an agricultural pest. 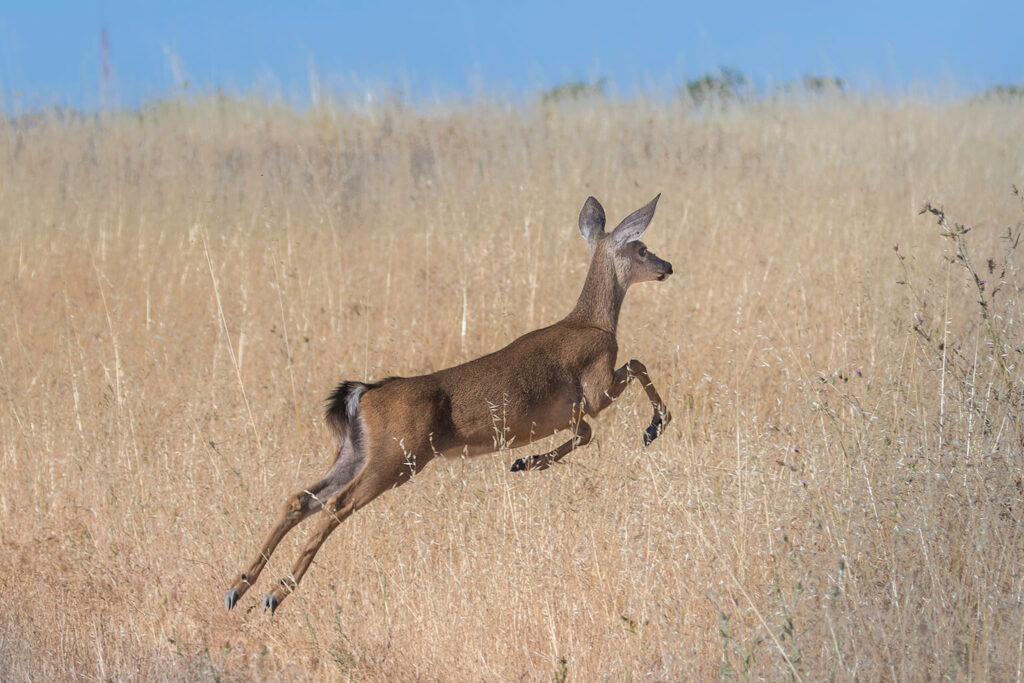 Fences and barriers seem to be relatively ineffective in stopping mule deer (Odocoileus hemionus). In addition to running and jumping, they are capable of a behavior called pronking or stotting, which seems more like a bounce than anything else—with all four legs landing at the same time. 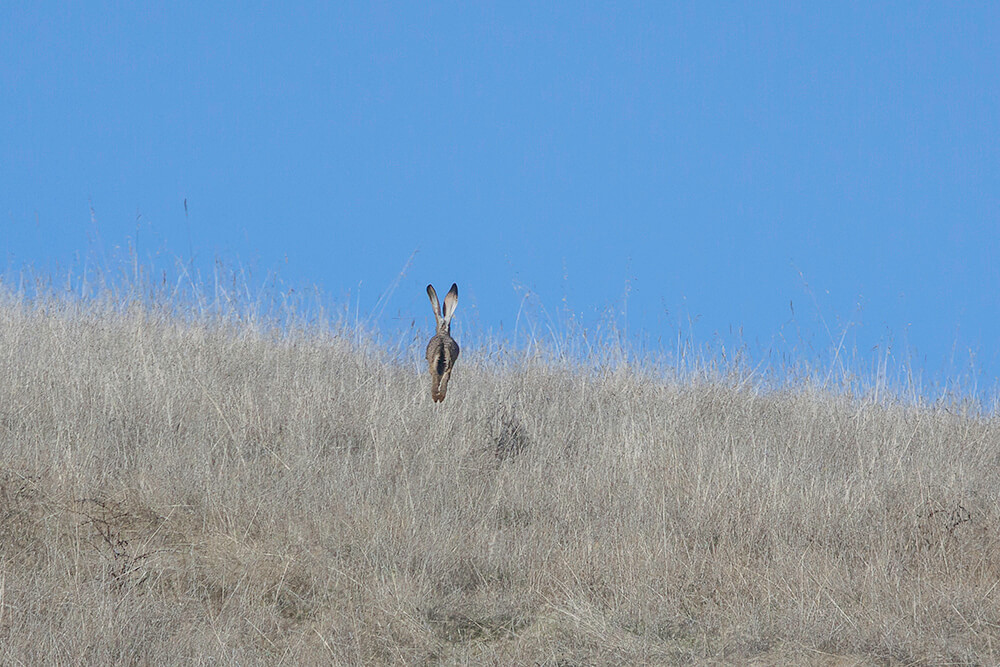 The black-tailed jackrabbit or American desert hare (Lepus californicus) is another member of the Leporidae family. They are remarkable for their big eyes, big ears and big jumps. They are found in great numbers in Byxbee Park and in other Peninsula Bayland areas. They have also adapted remarkably well to life on the Stanford campus. 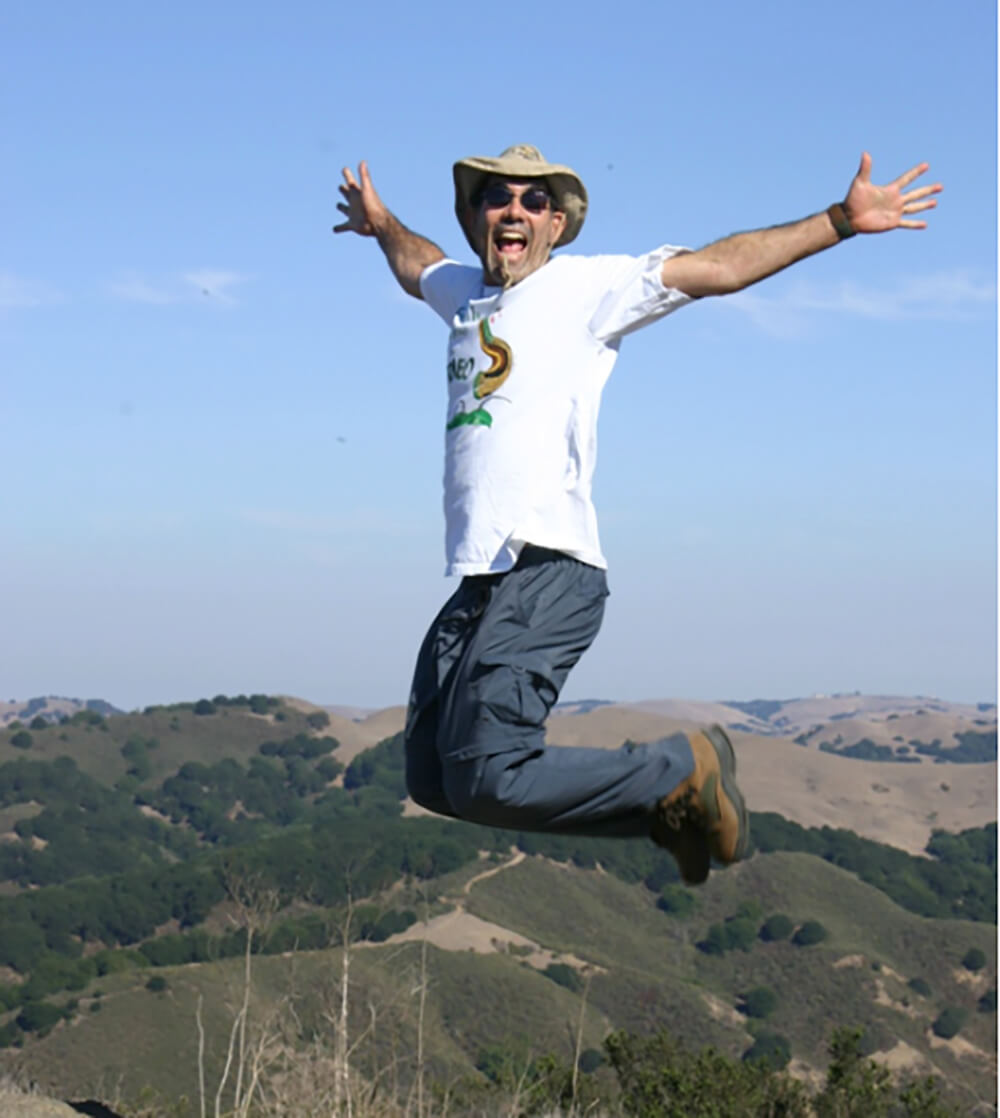 To me, jumping is an expression of exuberance. Certainly, being out in nature is a significant source of that exuberance. I am extremely fortunate to have accumulated jumping photos from all seven continents. This shot shows me aloft over the East Bay Hills. A combination of appropriate camera angle, good timing and strong propulsion from my hind limbs allow my sense of levity to overcome the force of gravity.