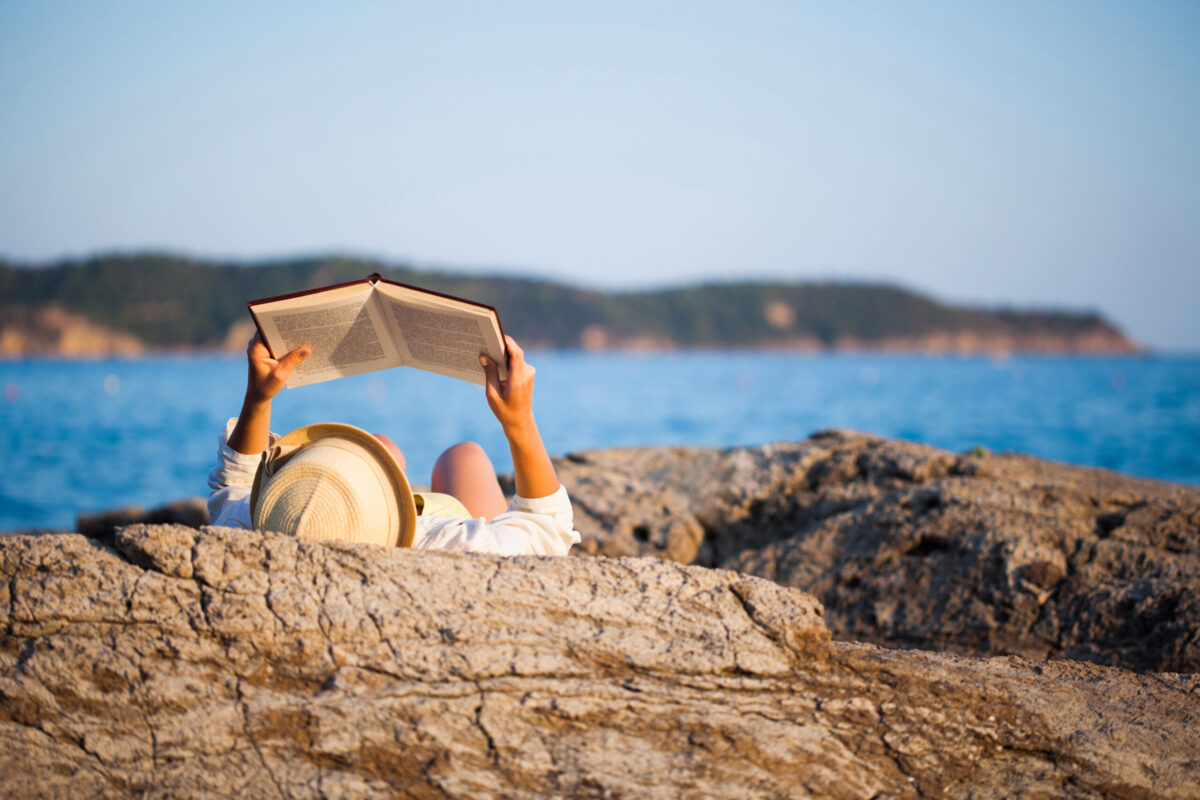 There are four perfect seasons for reading a book; however, summer always seems to invite an extra pull to the pages. PUNCH asked the erudite staff at Kepler’s Books for their favorite picks—with Peninsula or regional ties—for kicking back on a hot summer day. Book buyers Aggie Zivaljevic and Caitlin Jordan, along with store manager Amanda Hall, share a few titles that are just the companions you’re looking for to take you away. 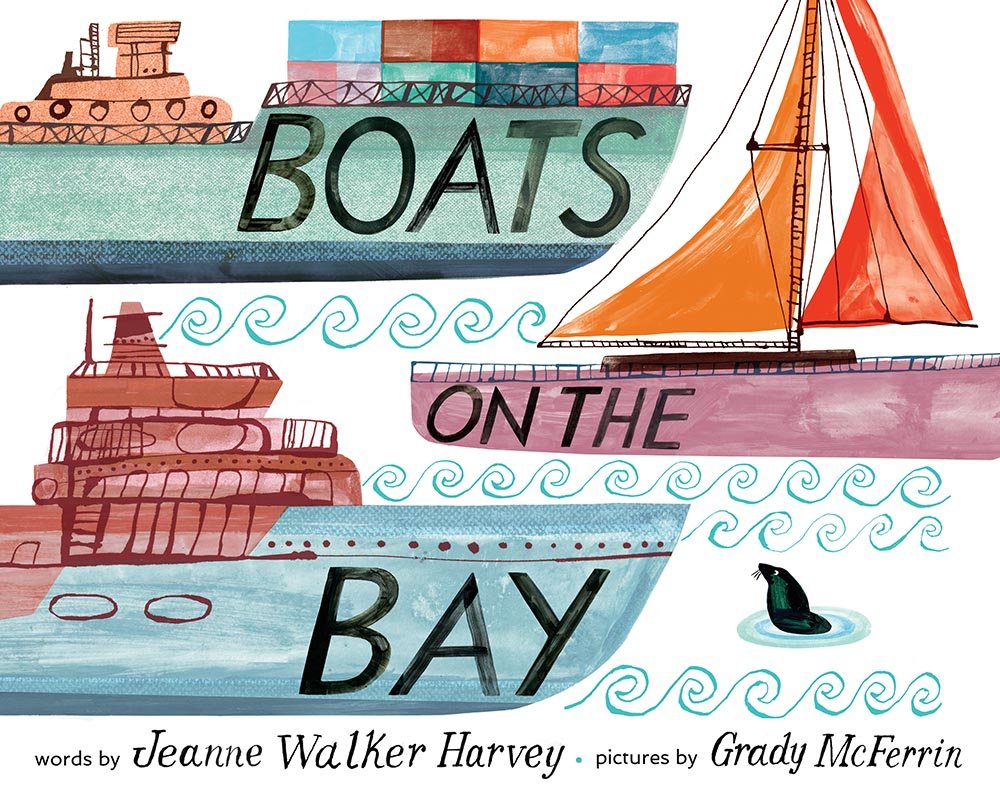 A Sausalito resident, Jeanne Walker Harvey has written a gorgeous Bay Area book about the different types of boats we have on our waters. It has stunning and original artwork with a color palette that is both striking and soothing. I am always in awe of people who can paint the world in different colors than what I see and have it feel truer than the original sight. The colors and lines that Grady McFerrin uses mirror the feeling of seeing these familiar, beautiful boats after a long absence. This book is a celebration of those beautiful aquatic vessels that make the San Francisco Bay Area the special place we love so much. Boats on the Bay, a 2018 Golden Poppy Award Winner for picture books, is a staple book for any Bay Area family and a perfect gift for those longing to come back.
— Caitlin Jordan 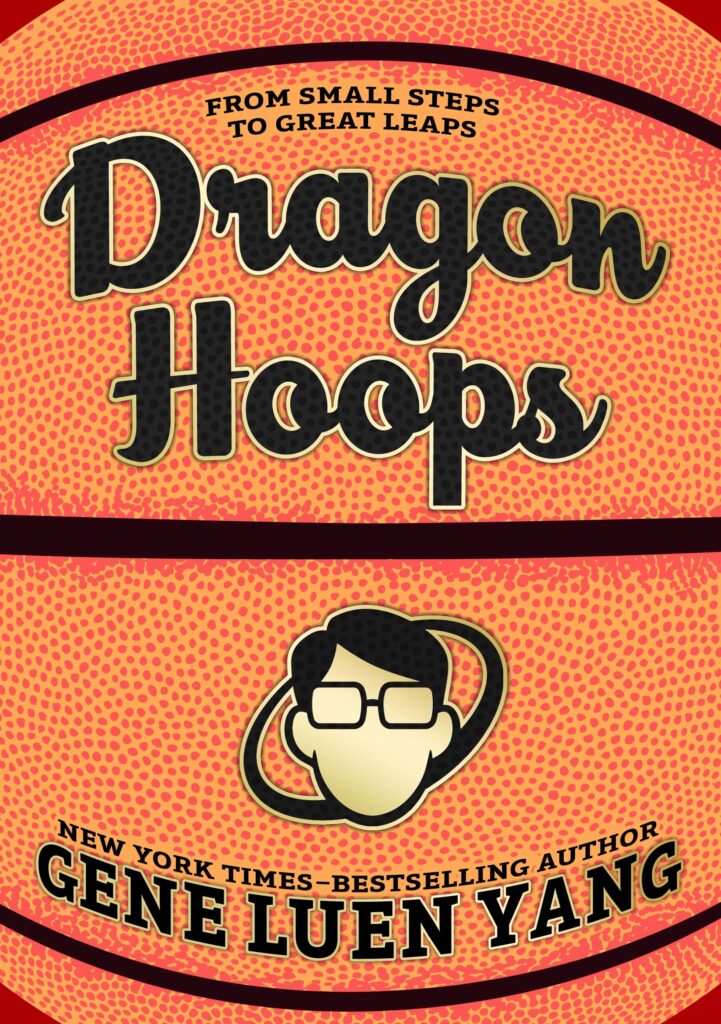 Gene Luen Yang has been a favorite of mine for a while now. There is nothing he has written that leaves me anything less than awestruck—Dragon Hoops is no exception. It’s an inspirational story of the men’s basketball team at Bishop O’Dowd High School in Oakland. They were having a season that looked like they could finally make it to the California State Championships. Gene, a computer science teacher at the school, never had any interest in sports but he soon became deeply invested in the coaches and players, their stories and their chance at winning State. I gasped, cheered, cried and laughed throughout this book! I was so immersed in their journey and wished to never come up for air. The action-packed, history-packed literary graphic novel of local history is perfect for sports fans, anyone wanting an inspirational story or just any reader looking for a book to absorb them into the pages. — Caitlin Jordan 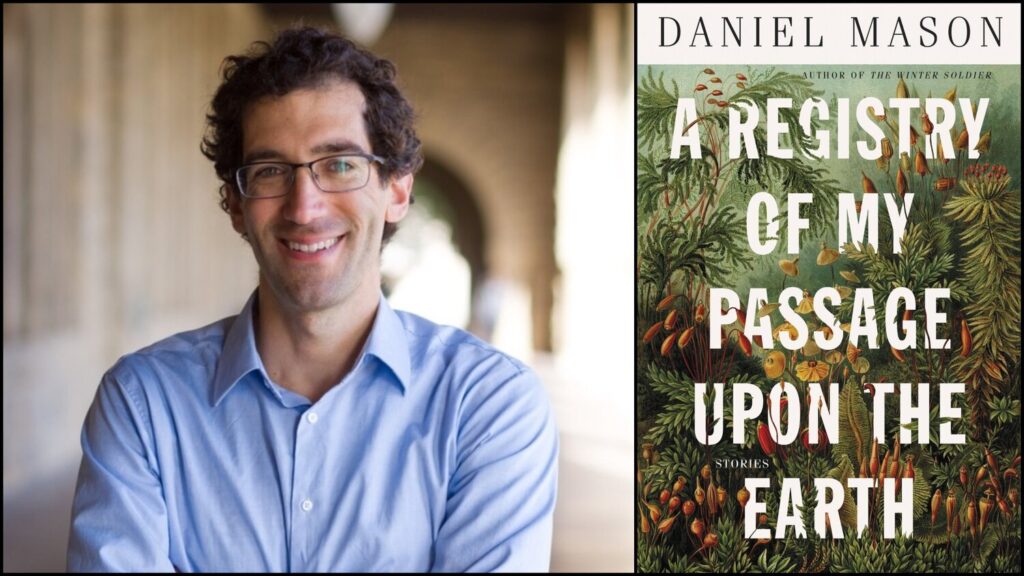 A Registry of My Passage Upon the Earth
By Daniel Mason

Daniel Mason hails from Palo Alto, and his previous novel, The Winter Soldier, is on my list of favorite books of all time. And now, I’m just as smitten with his latest book of short stories: A Registry of My Passage Upon the Earth. What a wondrous collection, bursting with longtime and faraway yarns, richly woven with philosophical and scientific details. Although we find ourselves in the realm of historical fiction, every story resonates deeply with today’s reality; a mother fighting for her child suffering from asthma, a lonely telegraph operator in the midst of the Amazon jungle seeking connection, a bug collector desperately waiting for a letter from Charles Darwin. The title story portrays Arthur Bispo do Rosario, a schizophrenic man in an asylum, who makes art out of found objects. Similarly, writers are collectors of human lives, registering our short passage upon the earth, making us see how strong our connections are and how we’re all touched by love and loss. Reading this book is like opening a treasure chest, each of the nine short stories belongs in an imaginary museum of historical curiosities. — Aggie Zivaljevic 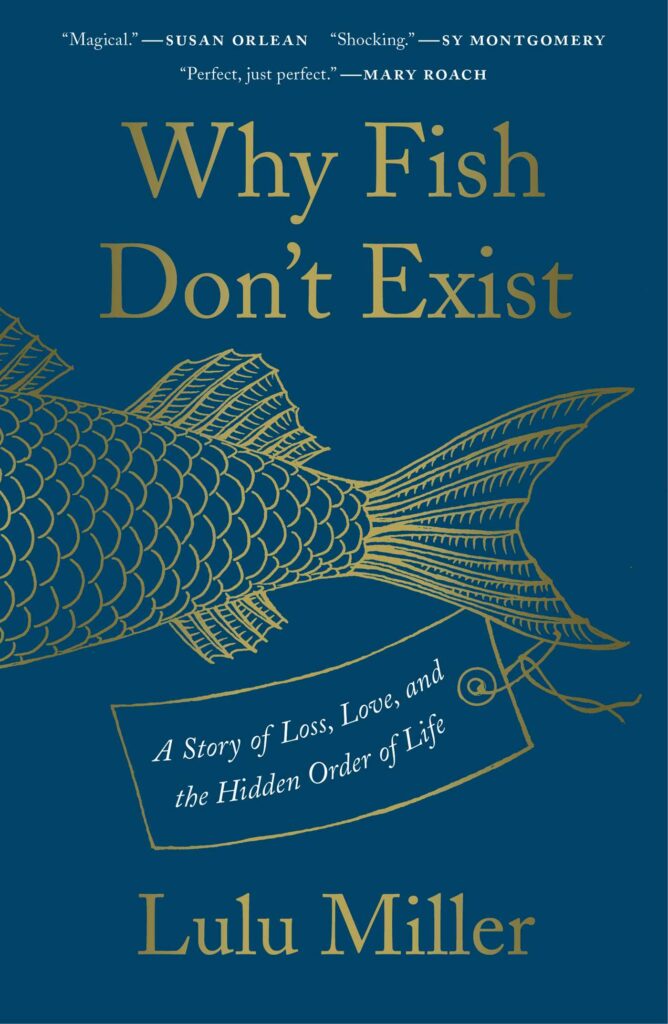 Why Fish Don’t Exist: A Story of Loss, Love, and the Hidden Order of Life
By Lulu Miller

The book was inspired by Lulu Miller’s personal journey to understand how to persist in the midst of chaos. This masterful book is impossible to classify; it’s part science, part biography/memoir, part psychological thriller, part self-help manual, interweaving personal and scientific elements in a dazzling way. It’s about David Starr Jordan, a founding president of Stanford University who devoted his life to studying fish, and how he recovered from losing his life’s work in the San Francisco 1906 earthquake. What Miller does is astonishing: She painstakingly makes a historical reconstruction of his life—from his enchanting boyhood full of curiosity, making maps of stars, collecting and classifying thousands of fish in his youth and becoming a taxonomist expert; to building the Hopkins Seaside Laboratory on the Monterey Peninsula during his Stanford tenure; to his involvement in covering up Jane Stanford’s mysterious death by strychnine poisoning and finally to being a supporter of eugenics in his old age. What connects all of these threads is Miller’s inquisitorial mind to understand Jordan’s childlike “shield of optimism” and what made him veer off the course. And yet, the most significant discovery she makes is about the invisible threads of human connection that keep us bound to each other—possibly the very secret of how to stay defiant and hopeful. — Aggie Zivaljevic 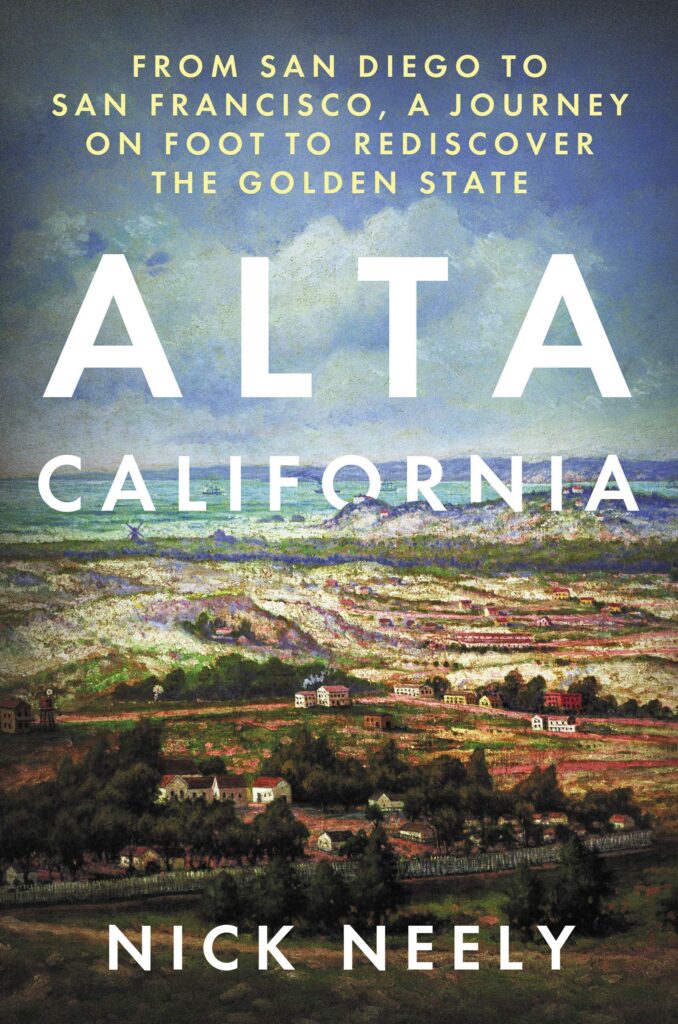 Alta California: From San Diego to San Francisco, A Journey on Foot to Rediscover the Golden State
By Nick Neely

In Alta California, Nick Neely travels one step at a time as he ambitiously sets out, on foot, to walk the historic El Camino Real from San Diego to San Francisco. In retracing the 650-mile trek, Neely draws stark comparisons with California’s past and its current state of affairs. This is a truly unique and intimate portrait of the King’s Highway, filled with little-known histories and great attention to detail. — Amanda Hall 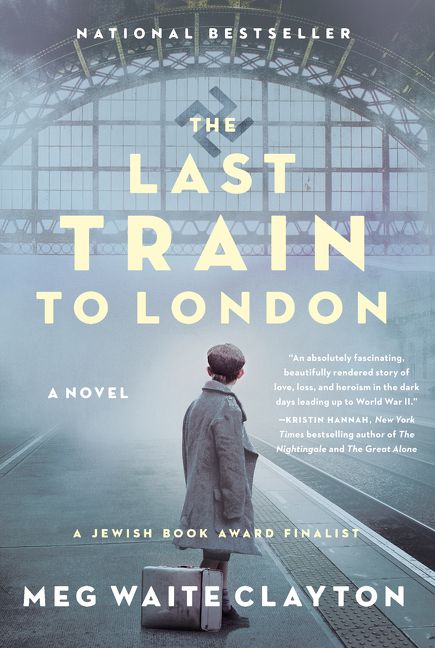 The Last Train to London
By Meg Waite Clayton

The book is based on a true historical figure, a Dutch woman named Geertruida Wijsmuller or Tante Truus (Auntie Truus), who saved the lives of more than 10,000 Jewish children at the outset of World War II. She organized children’s transports known as “Kindertransport” from Nazi Germany and Austria to the Netherlands, Great Britain and other countries who would take them. Palo Alto’s Meg Waite Clayton was inspired to place her book in pre-war Vienna after visiting an exhibit there with items from suitcases carried by children, including their toys, picture books and hairbrushes. She imagined mothers combing their children’s hair one last time before sending them to a great unknown, hoping they’d be safe. The other two central characters of this moving historical novel are teenage Jewish playwright Stephan and a mathematical prodigy Zofie-Helene who’s Christian, and what happens when their young friendship and love become forbidden. It’s even more poignant that this courageous woman who didn’t have children of her own became a savior of so many. — Aggie Zivaljevic