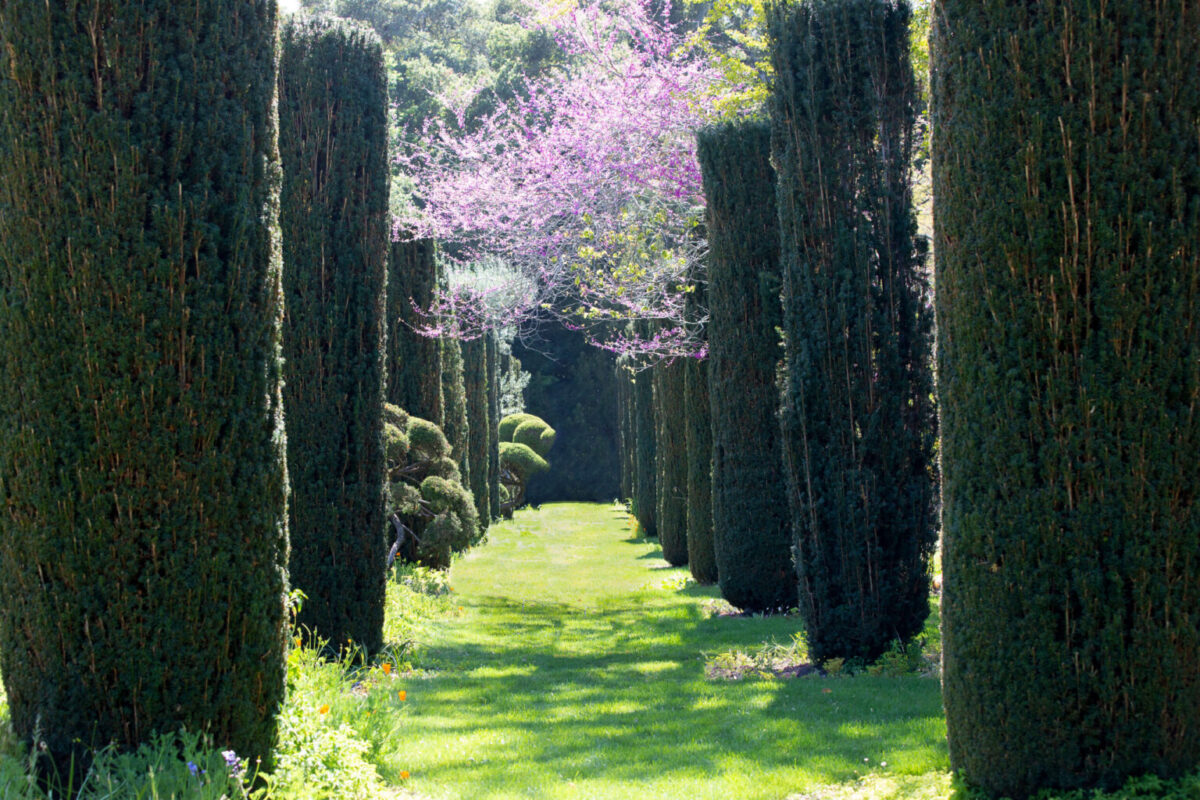 Imagine waking up in a bucolic setting where something new blooms every day, vegetable patches and orchards yield plenty and the surrounding acres teem with wildlife against sweeping vistas of the Santa Cruz Mountains.

And you’re already at the office.

For Jim Salyards, this is just one of the many perks he has earned after working at the landmark Filoli estate in Woodside for more than a quarter of a century. Living on the property for the past 18 years, the director of horticulture also enjoys the benefit of zero commuting. After growing up in the area, he appreciates what a plus it is to dodge all the traffic.

The one disadvantage to living and working in the same place may be maneuvering through the sellout crowds of people flocking to ooh and ahh over the thousands of picturesque blooming flowers, shrubs and trees in the 16-acre formal garden each spring and summer. Those are the peak seasons at the National Trust for Historic Preservation site, which includes the famous garden and the Willis Polk-designed Georgian Revival mansion completed in 1917 for William Bowers Bourn II and Agnes Moody Bourn, and then owned by William B. Roth and Lurline Matson Roth from 1937 to 1975.

But after spending so much time at Filoli Historic House and Garden, Jim naturally feels, “For the most part, this is my garden.” 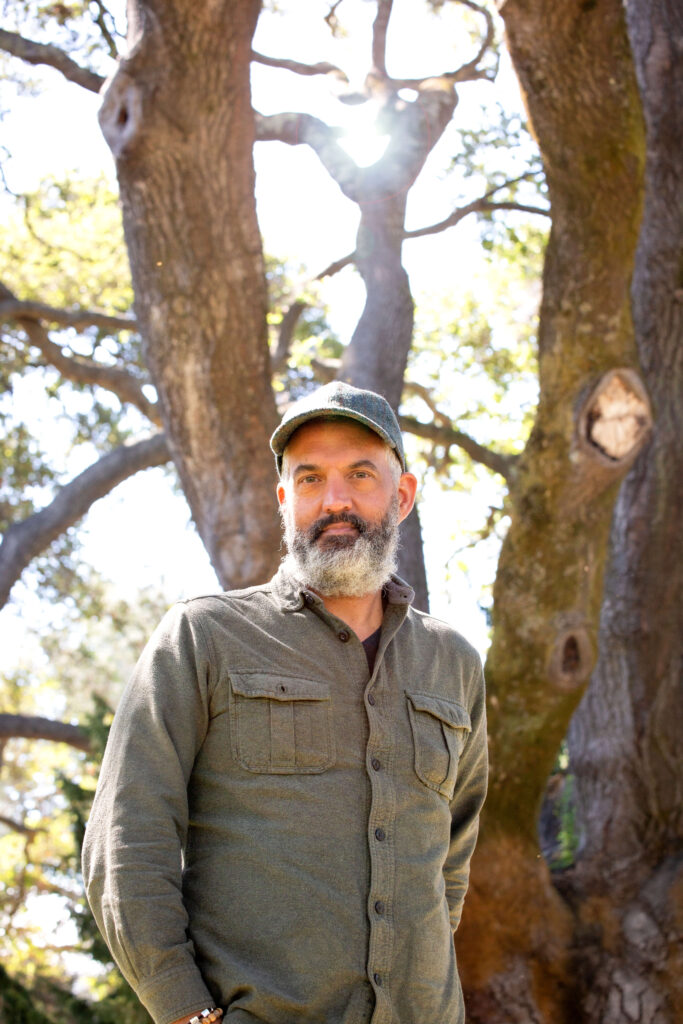 “I  love the scale of the garden; it’s broken up into spaces… designed so each room is revealed as you walk through, go through a gate, turn around a corner,” Jim says of the garden that has components of both English and Italian Renaissance design. “There’s a natural unforced intentionality in the way you move through the garden.”

The approximately 30 rooms—with names like the Sunken Garden, Walled Garden and Knot Garden—take a full-time staff of 15 to maintain, plus a group of interns. And hopefully, as restrictions lighten up this summer, Jim is looking forward to welcoming back hundreds of volunteers, some of whom he considers like aunts and second grandmothers now that his extended family lives in New England.

Jim’s earliest memories from his boyhood in Sunnyvale include catching butterflies with his younger brother in the fields and orchards before Great America Parkway changed the landscape. Jim’s parents took the family on regular visits to a local dairy farm that kept pigs and ducks, and for a time, young Jim wanted to be a zookeeper. A move to Boulder Creek at age nine led to the exploration of more wooded areas and an interest in raising his own animals: hamsters, snakes, iguanas, a box turtle and bluegill fish. Jim’s thoughts turned to becoming a veterinarian, but when he attended UC Davis, stimulating biology and botany courses changed his mind again. He ended up getting a BA in plant science and a master’s degree in horticulture there. 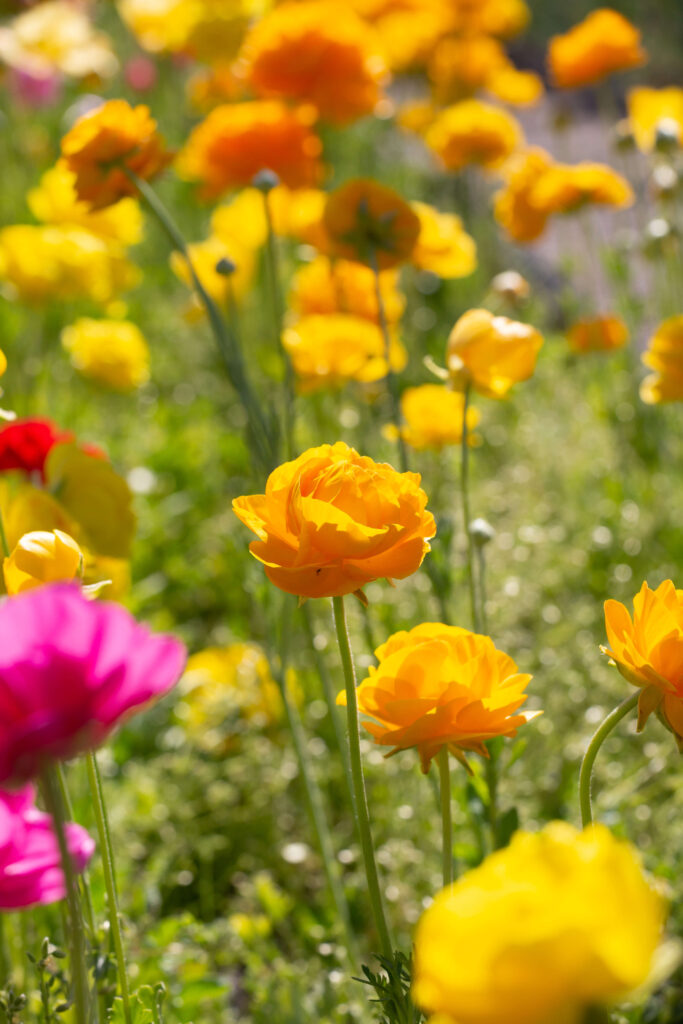 “Propagation was my first love in horticulture in school,” he recalls. “I loved it so much, I interned at the Arboretum in Davis and knew that I wanted to work in public gardens.”

Jim had a side business doing yard work for people in Davis when he applied in 1995 to be lead horticulturist at Filoli. Luckily for him, he landed his first real job in one of the grandest public gardens in the U.S. Over the years, he was promoted to greenhouse manager, co-leader of the horticulture department and then director of horticulture in 2014.

One of Jim’s challenges is balancing Filoli’s rich historical lore with innovative new ways. Photos and oral traditions help recreate and preserve the garden’s past, but an open mind and skilled staff help keep him forward-thinking.

“We’re dealing with historic plants and wanting to preserve what was planted by the Bourn and Roth families,” he explains. “We’re also trying to do things that are more sustainable and to some degree, more feasible, with the team that I have.” Another goal is making the garden appeal to a broader audience by being more exciting and welcoming. 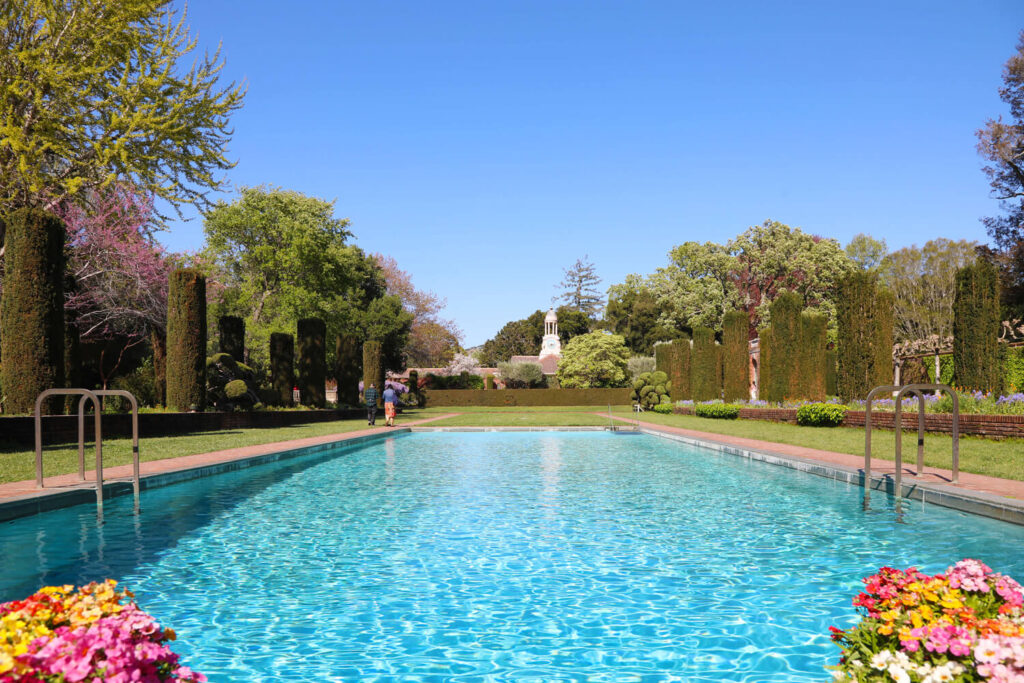 More exemplary, too. In drought years, Jim’s team had to pivot to cut back on watering lawns and woody plants. He sees this as a way Filoli can showcase best practices in conservation for the community. A new master plan is in the works, and there’s talk of building a new education center and a bigger parking lot in the future. He is proud that in the past year, Filoli’s board and staff have focused on diversity and equity, “creating a place that is inclusive and accessible in so many more ways than I feel it was historically.”

Starting with this summer’s theme of “Fruitful Garden,” there’s a new emphasis on pollinator plants with sages, poppies and sunflowers planted along the path to the Sundial to attract insects and birds. Medicinal plants such as white, orange, red and yellow echinacea are laid out like a stained-glass window in the Chartres Cathedral Garden. And the historic vegetable garden that once helped feed the Bourn and Roth families, and was taken over by staff as a cooperative, will soon be converted to a demonstration garden. The renovated garden will be open to the public for events and classes. Before long, Jim envisions the café serving fresh estate-grown vegetables with extras being donated to the food bank Village Harvest.

He also foresees producing new products for the Clock Tower Shop, adding to the apple, pear and peach butters, honey, hard cider and herb collections that carry the estate-grown label.

Jim reads a lot to keep up on the latest gardening trends and says he’s grateful to have a well-educated and fully state-licensed team. “We’re not over-fertilizing,” he adds, “and we’re not over-applying pesticide.” The staff composts and mixes in rice hulls, coconut fiber, redwood sawdust and sand to enrich the soil. “We’re leaning more towards being organic,” Jim says, noting that the estate is a public place, located in a watershed area that spills into the Crystal Springs Reservoir. 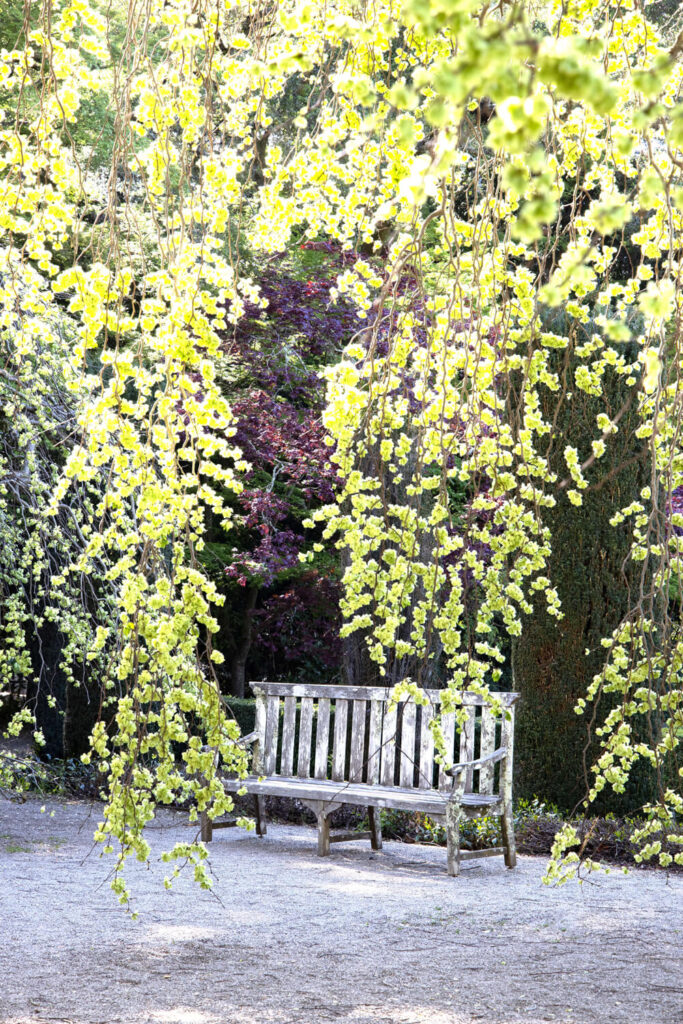 In years past, Filoli relied on volunteers to put in the much-needed elbow hours of weeding by hand. Without the extra help, the staff started experimenting with using corn gluten meal as a natural weed pre-emergent on the lawns. Innovative as he is, Jim continues to be mindful of the historic legacy he stewards. “We still tell the stories of how it originally was,” he affirms.

Jim describes the plants and flowers in the greenhouse complex as the hardest to grow. They are used to decorate the Main House and to turn the Tea Garden House into a conservatory. That continuity of greenery “makes Filoli come alive, the plants and arrangements are what we do to make it more like it was when the Roths and Bourns were here,” he says.

Also of note are the living vestiges of the two family eras. In the greenhouses, the cycad, the large palm-like plant that the Bourns acquired, continues to thrive, as do the anthurium propagated from the original one the Roths brought back from Hawaii. The estate’s Hinoki false cypress originally came from the Japanese Pavilion at the Pan Pacific Exhibition in San Francisco in 1915, before being gifted to the Bourns. Some of the majestic trees on the 654-acre estate date back even further. The enormous live oak on the north side of the mansion is believed to be more than 300 years old. The big valley oak next to the Garden House also stood its ground there before Filoli was built. 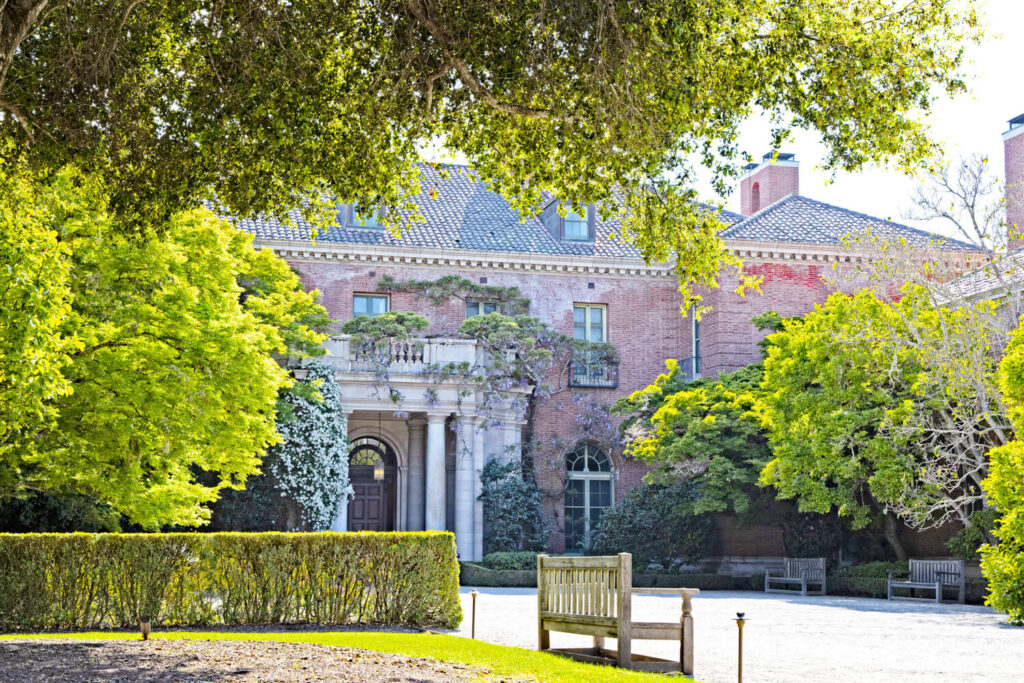 Pictures from around 1920 show the distinctive allees of Irish Yews in the garden. Grown from cuttings brought over from an estate the Bourns owned, Muckross House in Killarney, Ireland, the trees now number 210 and frame various rooms in the garden and swimming pool area, which was added later.

Jim’s own favorite tree stands out next to the Bowling Green. He’s drawn to the Camperdown weeping elm because “every season, in a different way, it’s a beautiful tree.” As he describes it, the chartreuse seed heads look showy in the spring until the shade canopy takes over in the summer, and after the fall colors dim, moss covers the wet branches during the winter. 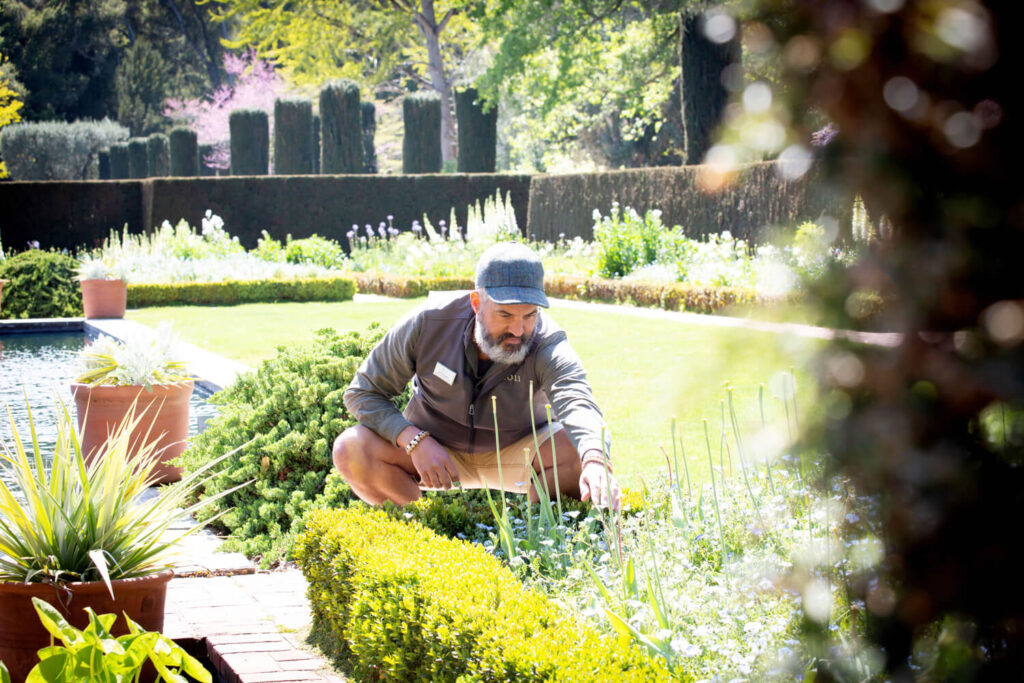 It makes sense for a man of all seasons to revere such a stately tree given that they have shared the same special place for the last 26 years.

“It has gone quickly,” Jim acknowledges, before emphasizing the many reasons he stays rooted. “What keeps me engaged and loving the garden is the setting and the views you can’t beat.”

Best of all, after hours, when Filoli’s visitors file out the gates, that splendid scenery is all his to enjoy. 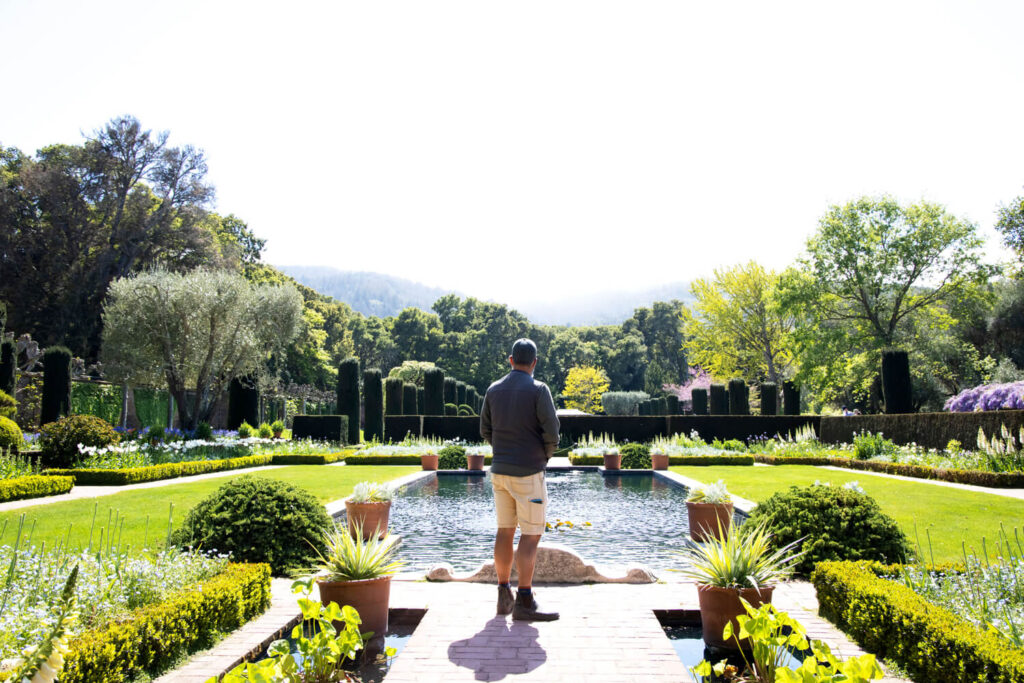