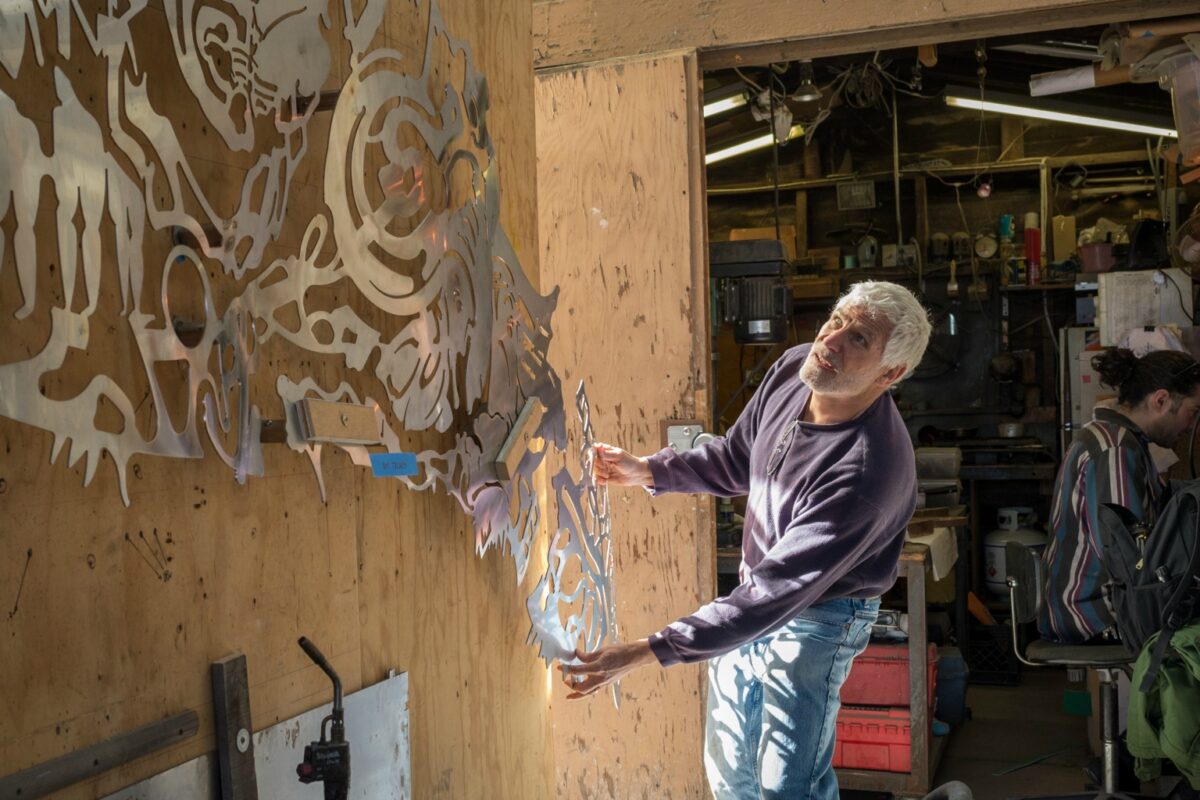 Heading into a concert or Thunderbolts game at The Ford Center in Evansville, Indiana, music and hockey fans encounter Vibrant River, a 41-foot steel-lace matrix of arcs adorning the arena. Looking up, they know to search for overlapping natural elements—from a catfish to a stag beetle—hidden within the abstract stainless steel sculpture.

At the Mitchell Park Library in Palo Alto, adjacent to the glass entrance, the 32-foot-wide stainless steel Cloud Forest appears to magically extend from outside to inside, welcoming visitors with its own mix of images tucked into the lacy steel pattern.

From Bethesda and Tucson to Oakland, Mountain View and San Jose, you’ll find immense wall-mounted and free-standing works of public art all sharing a common signature. They are the creations of Portola Valley artist Roger White Stoller, who in the same way he now liberates metal into miraculous forms, unleashed his own talent through personal transformation.

Situated in the Ladera neighborhood of Portola Valley, Roger’s home provides the perfect backdrop for hearing his story, surrounded by maquettes (scale models) and finished sculptures strewn throughout his property. As the conversation unfolds, Roger’s eyes dart about, settling on the perfect visual aid at any given moment to illustrate a point. “I’ll just get one to show you,” he says, before returning with a small abstract piece. “This is a wax model that will become bronze through the lost-wax process.” A few minutes later, he’s gesturing to a free-standing stone form. “This is a 10th scale maquette that’s actually from the same quarry in India that the 10-ton piece is from.”

Fully understanding Roger’s artistic journey requires a trip back in time to a different place—the neighborhood near Santa Monica where he was raised. As a boy, he became friends with the grandchildren of R. Buckminster Fuller, the world-renowned 20th-century inventor, architect and futurist, who authored 28 books and invented the geodesic dome. “I knew him growing up,” Roger shares. “And then when I turned 18, I realized this guy was really important so I read most of his books at that time. The thing that really impressed me about what he was doing was not only his ideas, but that he reduced them to practice.”

When Roger was in his early 20s, Fuller took him on as his personal assistant, bringing him along on synergetic geometry and geodesic projects around the world. “After I had been working with Bucky, I realized I’m a good model builder and I love his work, but I really am not trained in anything,” Roger remembers thinking. Influenced by his mentor, along with Fuller’s close friend, critically-acclaimed sculptor Isamu Noguchi, Roger enrolled in the Art Center College of Design in Pasadena. After graduating with a degree in product design, Roger recognized that if the information revolution was about to happen (as suggested by Alvin Toffler’s The Third Wave), he needed to hightail it out of Pasadena and get to Silicon Valley—a move which led to 15 years of industrial design work and the founding of Stoller Design and co-founding of Praxis Design Associates. “Industrial design is everything that’s not architectecture,” Roger explains, sharing that his work during this period included designing furniture, medical equipment and digital cameras for corporate clients. As his firm grew in size, Roger found himself taking on a role he hadn’t anticipated. “Since I was one of the principals, I needed to be schmoozing clients and doing sales and marketing,” he recalls. “I got pretty depressed because it felt like I had sort of succeeded into a corner.”

At ends with what to do, Roger took a psychological assessment/personality test and was staggered by the results: “It came back with sales at like 3%, marketing at 5%, design at 85% and artist at 99%, which is the highest score that you can get.” Roger tried to process what the test was telling him. “I never really thought I was allowed to be an artist, so it never occurred to me,” he says. “Also by this time, I had two young kids and a mortgage. But I felt I had to do it. It didn’t feel like a choice.”

With his wife Naomi’s support, Roger exited the corporate design world and started taking classes at the Foundry at San Jose State, while teaching industrial design courses. “I knew I had to make a living, so I bought myself a couple of years while I figured myself out as an artist.”

Here, Roger pauses and gestures to two sculptures in the living room. “See those pieces in the corner?” he asks. “Those were made by me, by hand. Everything I did in those days were just things I was making myself.”

So how does one go about finding one’s artistic identity? Reflecting back on his early influences, Roger expected to embrace a minimalist calling but ended up veering in a different direction: “The first time I took a class with a torch to cut metal, I kept drawing lines with this torch. I thought, ‘Wow! There are patterns just sort of coming out!’ and I’ve been creating patterns ever since.”

Surprised to find himself creating elaborate, complex designs, Roger reconciled his new-found style with his love of nature. “I realized a tree is a simple thing from a distance, but when you get up close, there’s so much going on with just the bark alone, let alone the leaves, or molecules inside,” he notes. “I started trying to create things that would have that simplicity when first encountered, yet allow for the discovery of depth and meaning as you encountered them further.”

Roger also found himself channelling one of Fuller’s basic units of structure. “A tetrahedron is like a cube made out of triangles,” Roger explains. “I started taking that form and working with it in various ways—something very simple and geometric, but then introducing a complexity like one finds in nature.” And then, there was that other driving motivation, and not a small one to factor in. “For some reason, I just kept feeling I wanted to do these really large-scale pieces,” he says. “My wife was like, ‘Really? That’s so much metal and weight and cranes and everything.’”

Once Roger figured out what he wanted to do, the next critical piece was identifying the place to do it. And that’s how Roger discovered public art and “Percent-for-Art” programs, which require local, state or federal entities to build the cost of public art into project construction budgets. “To do these big pieces, I had to find an avenue,” he says. “I got introduced to the idea that they have these competitions. I had the attitude that it’s very hard to succeed at this but some will, so I’m going to be one of them.”

In 2002, after winning his first national competition, Roger installed a major public sculpture, the 22-foot Textrahelix, for Alza Corporation. Weighing 11 tons, the work ended up in a serendipitous spot, standing in front of what later became Google’s headquarters. Roger’s new course was set, and today he estimates that about 80% of his sculptures are public works, with residential and corporate making up the other 20%. To date, Roger has installed 15 public works, with two to three new projects underway every year. “The public thing was perfect as there are existing budgets for art and my work is seen by many, many people,” Roger says. “I’ve got the best of both worlds, as they select me to do my thing, but I strengthen the public nature of the work by incorporating their thinking, loves and interests.”

Sculpting full-time out of studios in Portola Valley and San Jose, Roger has an evolving technique that would be a story all its own, but he clearly remains passionate about playing with fire. “We built the furnace that melts the bronze at 2000º. It’s like being near a volcano that you’re controlling,” he says. As for what it takes to install his massive sculptures? “The freestanding pieces are completed at the Studio shop; we truck them out, take a crane and put them up,” he summarizes. “But the wall pieces are like giant puzzles that have to be assembled on site, so the first time I see it in full scale is when we install the final pieces.”

Having now toured Roger’s collection of sculptures arranged around his property, it’s finally time to reflect on where his choices have brought him. “It was the right thing to do, and I’m really happy I made the jump,” he says. And even as he had his own mentors, he realizes that he has become influential as well: “My younger daughter is a choreographer whose work was recently performed at the Royal Opera House in London. She’s making a success out of an impossible career, in part, because she saw it was possible.” Created for kids and adults alike, the “seek & find” aspect of this stainless steel sculpture is fun for everyone. In the Africa section of the zoo, L’Mara depicts iconic animals of Africa through a series of shapes and other hidden figures. From a distance, one sees a giraffe’s head, but upon approach, other images can be found within the lacy steel pattern: a crocodile, a lion, an elephant, a cape buffalo, a baby zebra, a rhino, a meerkat and silhouettes of people. This sculpture is the signature work of art at the Music Center at Strathmore Arts Center near Washington, D.C. Tetra Con Brio is a symbolic representation of the dynamic performing arts alive within the Center. The sonata form of musical composition has been utilized as a guiding principle underlying this visual improvisation set in bronze. The dynamic tension between the pure integrity of tetrahedral geometry and the intuitive/creative process combine in bringing the work to life. Located in the entry of Palo Alto’s new state-of-the-art library, Cloud Forest is inspired by the symbol of Palo Alto, the redwood tree. This sculpture is an abstracted interpretation of the unique exchange between the coastal redwoods and Pacific Ocean marine layer. The steel curves subtly “billow” from the walls to join with the hand-brushed finishes in creating uncommon light reflections. These complex patterns of light and steel signify the worlds within worlds found inside the library.