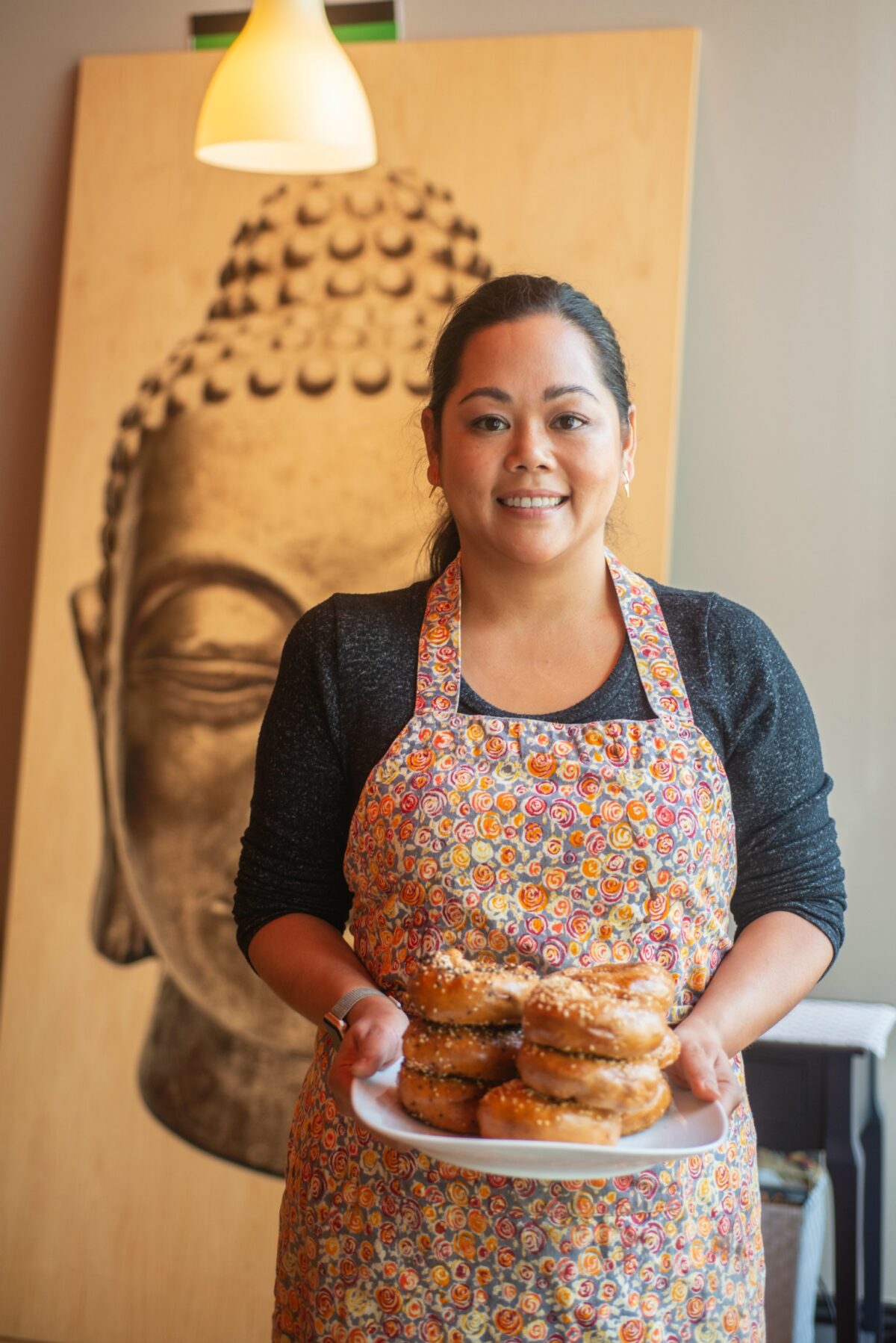 Some 20 years ago, Chef Grace Nguyen was running a restaurant in San Francisco when a customer placed a particularly picky order. At the time, the pickiness irritated her, until she learned that the woman had celiac disease. Noticing an increasing number of special requests, Grace started researching gluten and what foods would accommodate a gluten-free diet. Back then, she had no idea that this would lead to co-founding Asian Box in 2011, and more recently, launching Gracie Jones’ Gluten-Free Bake Shop, a small, thriving business in midtown Palo Alto.

At the time Grace sought to learn more, most people had never heard of gluten (a protein found in wheat and cereal grains), much less considered eating gluten-free. Today, 1% of Americans are affected by celiac, an autoimmune disease with potentially serious health complications that requires a gluten-free diet. Another estimated 18 million Americans suffer from some level of gluten intolerance—with side effects like stomachaches, bloating, joint pain and headaches.

When Grace and her partners were preparing to open Asian Box, they met a family with a four-year-old son who had celiac disease, giving yet another face to the health issue. An idea sparked: Why not launch as a gluten-free restaurant? Inspired by street stalls in southeast Asia, Asian Box’s menu naturally lends itself to gluten-free offerings, since they lean heavily on ingredients like meat, vegetables and rice noodles. Over the past eight years, the business has expanded to 10 locations throughout California, including the original Town & Country Village shop in Palo Alto and another in Burlingame. But how did running an Asian restaurant chain lead to opening a bake shop?

“We were growing rapidly, and I was tired of jumping from one restaurant to the next to teach new cooks how to do the recipes,” Grace explains. The team decided to open a commissary kitchen to make all of Asian Box’s sauces, with a driver delivering them to the different restaurant branches. Catering had also expanded too much for any of the restaurants to accommodate individually, so this became the catering kitchen as well. Always experimenting, Grace also started to use the kitchen for baking. “I’ve always needed to create. I’ve always needed to do something,” she says.

And that’s how a gluten-free bake shop came to be the public storefront to the commissary kitchen. “I’ve always loved baking, but I knew that I couldn’t not do gluten-free, because the kitchen is already gluten-free for Asian Box,” says Grace. Everything in the kitchen is gluten-free in order to prevent any potential cross-contamination. Even her two employees know they cannot bring in lunch or snacks that contain gluten, in order to keep the kitchen clean. And the name? Apparently it’s a thing in the food industry for cooks to have nicknames, and “Gracie Jones” earned her moniker from her husband, a chef and culinary director for Asian Box. She liked it, and it stuck. (You might even notice “Miss Jones’ Sriracha” on the Asian Box menu, named in honor of you-know-who.) When the bake shop opened, it seemed only natural to keep Gracie Jones in the title.

One of the biggest challenges in gluten-free baking is creating an appealing texture. “Because I am not gluten-free and I know what things should taste like, I would feel so guilty if I made something and I couldn’t even eat it myself, and I had to go and sell it!” laughs Grace. Gluten is what makes dough elastic, so a lot of gluten-free baked goods are dense and crumble easily. To counteract this, Grace developed her own flour mixture that produces more palatable pastries.

When she first started researching gluten-free baking, most sources recommended mixing five or six different flours—more hassle than Grace was willing to undertake. “That’s too much work,” she says. “So I created my own flour blend, and then after a few tweakings I found the flour blend that works for me.”

Grace has taken it on as a challenge to develop gluten-free recipes that are also on the healthier end of the spectrum. She often uses psyllium husk as a binder, which adds a lot of fiber to her products. Brown rice, sorghum and millet also provide a lot of nutrients, including protein and fiber. The friend whose son inspired Asian Box to go gluten-free happens to be a professor and doctor, and she taught Grace about low-sugar, low-fat eating. “I just wanted to bake!” Grace shrugs. “Because of her, I switched my mindset to bake gluten-free but also things that are sugar-free and vegan to make it healthier.” To do this, she uses coconut oil and coconut sugar, which she says she actually prefers to cane sugar.

Vegan, dairy-free and grain-free items at the bakery contain less sugar. The granola recipe is sweetened with coconut sugar and honey. Grace uses coconut sugar as a substitute upon request for special orders, like birthday cakes, but using it in all her products is price prohibitive. It’s important to her that customers can purchase high-quality items without breaking the bank; she believes people’s wallets shouldn’t suffer just because they aren’t able to consume gluten. “If I could afford it, I would switch it all over, but it’s too expensive,” she says. “I don’t want to have to charge $7 for a cookie!” Grace is now four years into her dedicated baking kick. She continually experiments with new recipes, having employees and partners test her products and give honest feedback before offering them in the bakery display. Some of the more popular items at the bake shop include breads, bagels and doughnuts, which many customers said they’d missed since going gluten-free. The chocolate chip cookies are also big hits.

Bake shop visitors can choose from a large variety of baked goods, and they can also stick around for lunch. The menu includes a variety of banh mi sandwiches, an Asian salad, a number of protein-rich bowls and daily specials testing out Gracie Jones’ newest recipes—all gluten-free, of course.