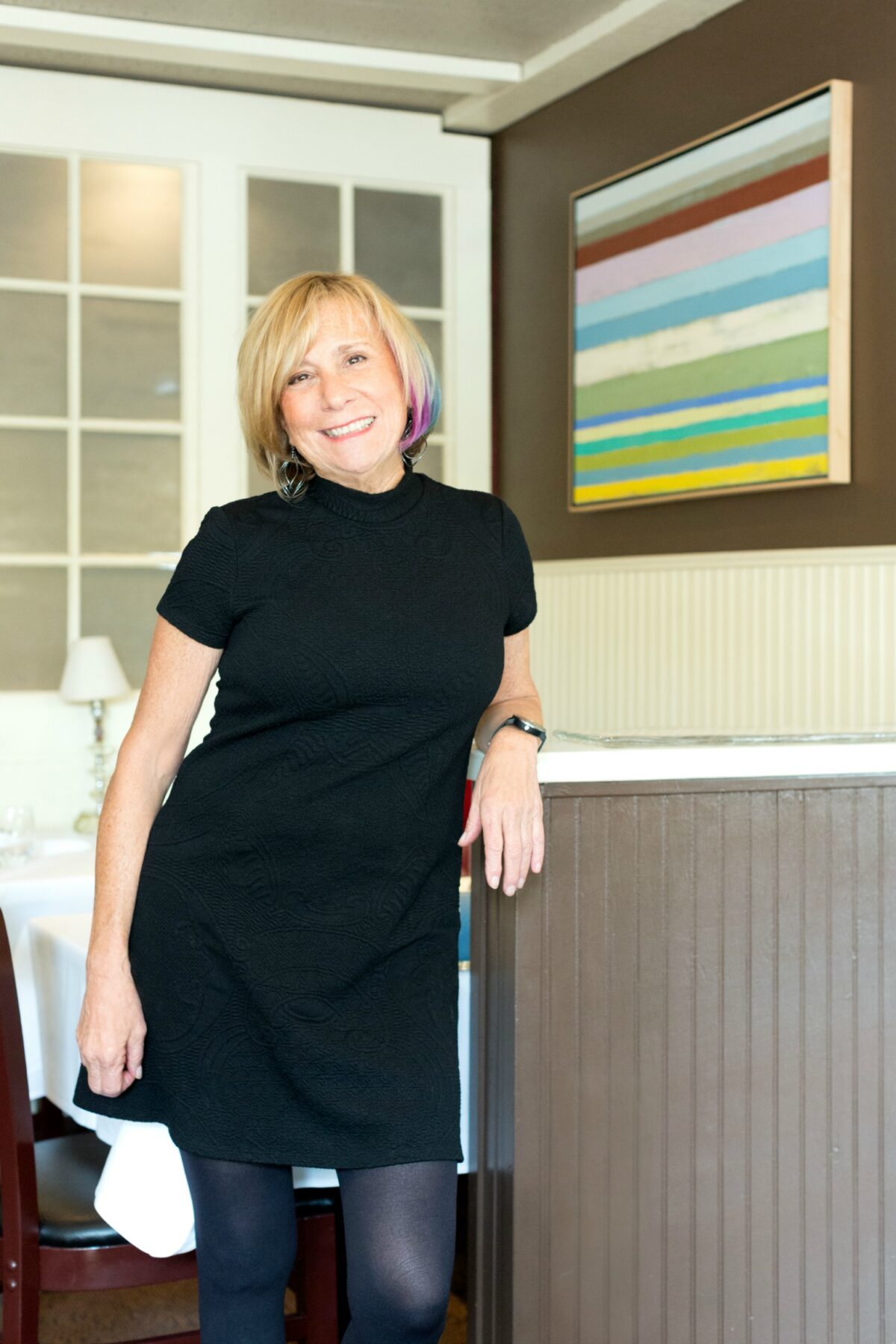 In  Palo Alto’s College Terrace neighborhood, pass through a wooden gate, under an archway of greenery, up a brick staircase and into a charming 1920s-era home with a classic red-tiled roof. You’re entering a no-shoe zone, so unlace and leave your boots at the door. Cross through the kitchen, with its colorful mix of cooking pots hanging over the center island (this is where magic happens), and make a quick pit stop—briefly (and happily) noting the comfy Japanese heated toilet seat and the copy of The World According to Mr. Rogers beckoning to be read. No time to linger though, a chair at the dining room table and a conversation with Jesse Cool awaits.

Where to begin when you’re talking with the chef-restaurateur (some might say Peninsula culinary icon) who championed local, organic, sustainable food long before there was any awareness to do so? A look out the back window offers enticing glimpses of seedlings taking root (begging the question, “What’s in Jesse’s garden?”), but before diving into the present, let alone the future, it makes sense to look back at the past.

More a self-described love child than a hippie, Jesse caught a ride to California in the early ‘70s, a three-month cross-country journey in a rainbow-painted Volkswagen van. She came from small-town western Pennsylvania stock. With a lineage of grocers, butchers and Old-World food people, she was a single mom who knew how to cook. But when she arrived on the Peninsula, “high-fat, big, cheap food” dominated the menus and that just didn’t jive with Jesse Cool.

Dedicated to sustainable agriculture and cuisine for more than four decades now, Jesse is widely-recognized for leading the movement that introduced fresh, organic and locally-sourced ingredients into Peninsula food culture. But Jesse doesn’t see herself as a trailblazer. If anything, she thinks she pulled values backwards—back to a village mentality. “I actually think I’m very old-fashioned. I don’t think I’m an innovator. I’m not a pioneer. A pioneer invents things,” she says. “My family taught me this connection of where the food comes from. In a village, you would want the bread baker to survive, you would want the person raising chickens to survive; I would call it ethical. I was brought up that way, and when I got here, I didn’t know how else to do it.”

Jesse first encountered the Peninsula—the once orchard-laden “Valley of Heart’s Delight” on the brink of evolving into tech-centric Silicon Valley—in a time of transition. Heartened by the sight of apricot and cherry farms still spotting Santa Clara County, Jesse was shocked by the scarcity of local produce. “It was all shipped out. There was no market. It was like being in the middle of Idaho,” she recalls. San Francisco and Berkeley got their share, but, “None of it came down here. It took decades to happen here.”

After working as a waitress in Palo Alto’s Good Earth Restaurant, Jesse became a restaurant owner in 1976. With an investment of under $5,000, she partnered with her then-husband Bob Cool to open Late for the Train in Menlo Park. “I thought it looked European but it was all from the thrift store. I think if people would describe it they would say it was a hodge-podge of mismatch,” she says. “We just opened the door and the lines started because the food was good, clean, chemical-free. We couldn’t say it was organic because people would mock us and make fun of us.” Sourcing organic food was cumbersome, but Jesse refused to compromise. “I think I was the only one buying it, and I’d go get it. I had an old pick-up truck, and I would go to the Palo Alto market and I’d drive over to Pescadero to buy organic beans from Phipps Ranch,” she reflects. “In one of my many nearly-going- bankrupt moments, I remember my mom saying, ‘You’re going to go out of business. Nobody cares if the onions are organic. Nobody cares.’ But I said, ‘Mom, you and dad taught me that.’ I think it was this gut, soulful connection to my whole community that if I did something that wasn’t ethical or respectful, I couldn’t live with it.”

Jesse carried that unwavering commitment through the founding of five restaurants and the decades that followed, leading the march to bring farm to the Peninsula table, while expanding her touchpoints as a restauranteur, writer, spokesperson, educator and consultant for eco-conscious food service. Even as the tech boom spawned countless VC and corporate partnerships, Jesse developed her own local connections to include 40-plus farmers, vintners, fishermen and ranchers—with names like The Rabbit Lady, Full Belly Farm, Pasture Chick Ranch, Michal the Milkman and Harley Farms Goat Dairy.

In 1980, she launched Flea Street Cafe on Alameda de Las Pulgas (“Street of the Fleas”) in Menlo Park, now considered legendary for its achievements in sustainable cuisine. Along with Flea Street, Jesse continues to operate Cool Cafe at Stanford Cantor Arts Center. She also sits on three boards, lectures for Stanford’s Department of Education and created Farm Fresh at Stanford Hospital, an organic, local menu option for critically ill patients. Jesse’s CV reads like a book, and to that end, “Somebody at the bar said ‘You need to write a book,’ and I said, ‘I’ve written seven,’” she recounts. No wonder it’s such a challenge to effectively boil down (or reduce) her rich, complex and ever-evolving life and career to the essential ingredients. Plus, there’s still the future to talk about. With two grandchildren, and a milestone birthday not too far off, what’s on the agenda for Jesse Cool version 2019? Even as the now-signature purplish streak in her blonde hair catches the light, her response comes easy: ’I want to be a badass elder.”

While there’s still evidence of the ‘70s love child in her, Jesse is clearly eager to embrace the role of badass elder. A top priority—getting more hospitals to make the shift to serving organic, local food: “We need to have clean food in healing environments,“ she says.

On the restaurant front, foodie fans will be happy to hear that Jesse recently signed new ten-year leases for both Flea Street and Cool Cafe, guaranteeing the continuity of her gloriously simple, ingredient-driven fare on the Peninsula. “What I hear from people is they can eat bountifully, but they don’t leave with a food hangover, and I think that’s because they’re not being tricked with salt, fat or chemicals,” she says. In even more momentous news, Jesse shares that she finally found a Flea Street business partner. Starting in January, Michael Biesemeyer is officially co-owner of Flea Street, handling operations, while Jesse continues to advise and work with the staff on food and production. “I wouldn’t bring a partner on if I didn’t trust that he loved everything about our core values,” she says. And, as if to emphasize that she’s not going anywhere, “I plan to sit at the bar and drink a martini every night as I always do.”

Jesse is also keeping fairness and social justice on her plate, which explains why you won’t see prices coming down. “If food seems to be expensive, I hope people understand what it takes to produce our food here and that there’s a cost to it. We have to pay the farmers, the fishermen and the ranchers and service staff who take care of us. Please do not complain about the cost of service because these people can barely afford to live here,” she says. In that same regard, Jesse hopes that those who can afford it will respectfully donate to the broader community. “We have to make sure if we have abundance, that we share it,” she says. “It’s terrible to think that only the wealthy can eat well. Clean, healthy food should not be just for the elite.” With only so much time, topics quickly get whittled down. What’s in her backyard garden? It’s actually a mini-farm on Stanford Open Space property, officially approved by former President John Hennessy and used as a model classroom for Stanford students. “They drew the farm into their plan, so it can be there forever,” she says. Along with a chicken coop, greenhouse and compost bin, the crops change with the season. With winter, “You’ll see root vegetables, carrots, turnips, radishes, cauliflower, broccoli, artichokes and potatoes,” she says.

Does the badass elder ever loosen up? That’s where Jesse’s 80/20 rule comes in. Her personal philosophy is to be truly conscious and conscientious 80% of the time. For the other 20%, she says, pick your poisons: “For example, I love to eat. I want a hot dog at the ballpark or some delicious pasta carbonara with lots of egg yolks and bacon in it, but then the next day, I’m gonna eat salad and soup because if I do it all the time, I wouldn’t be well.”

And just getting in under the wire, the last question that begs to be asked—what’s the story behind the purplish streak in her hair? First off, it’s actually two colors—rose and fuchsia—and it’s a signature style that dates back to the early ‘80s, when, rebelling against being in the suburbs, Jesse asked herself, “What can I do that’s different?” Every time she tried to take the streak out, her kids would complain, and now, “I feel naked without it,” she says. In fact, badass elder Jesse recently rebelled a little bit more. Look closely, and you’ll see a faint glimmer of green in her tresses. “This young woman who did my hair a couple of weeks ago said, ‘Can I put one more color in there?’ and after 36 or 37 years, I said, ‘Let’s do it!’ And I love it!”

Lots of changes in four decades, but Jesse’s priorities haven’t shifted since her arrival in that rainbow-painted VW van. “Peace, freedom, feeding others, community,” she summarizes. The same way she championed local, organic food, these are the core values she’ll keep fighting to make mainstream.