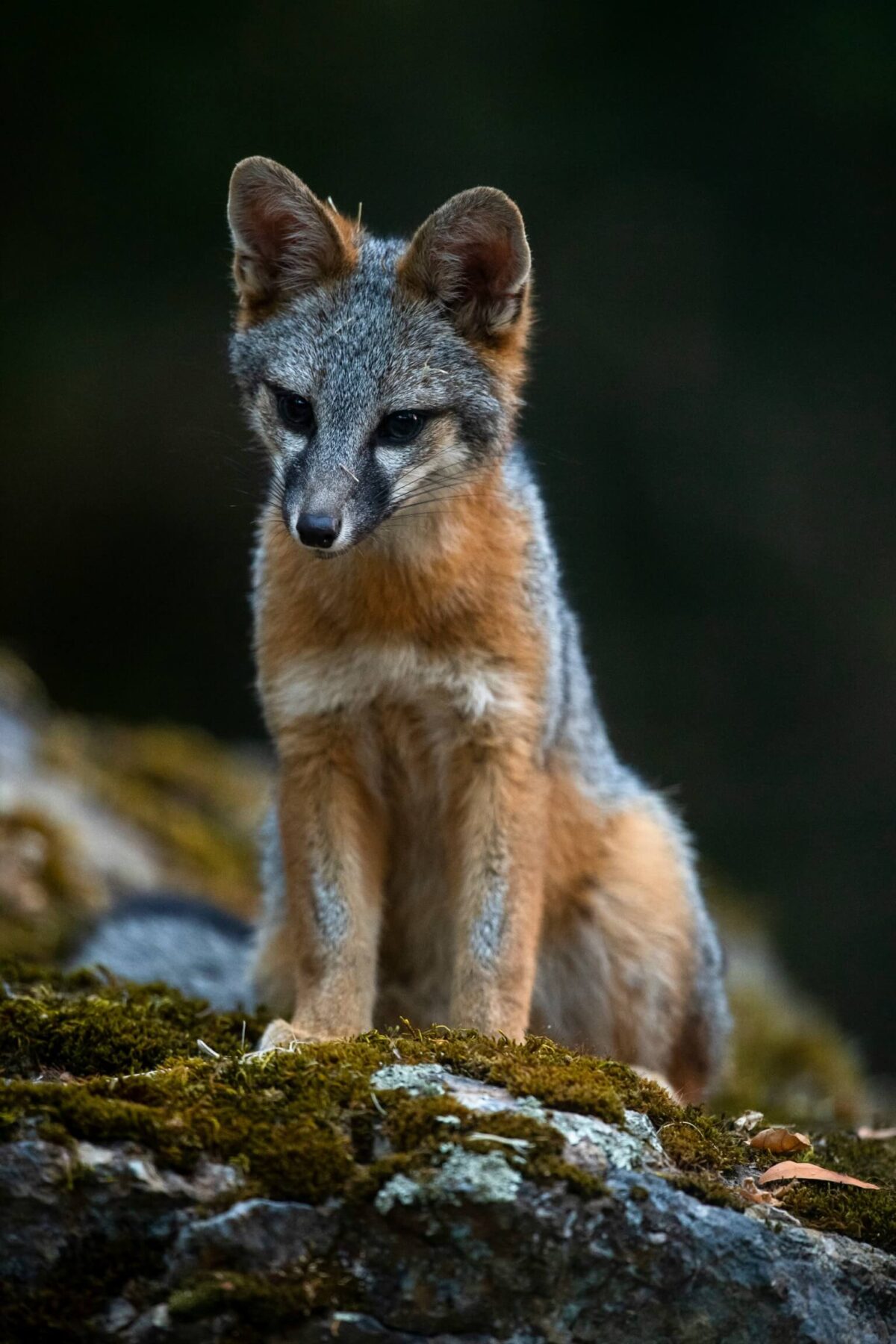 Twice a day, you’ll see a white Lexus pulled up at the end of Embarcadero Way in Palo Alto. The car’s license plate reads FOX GUY, which also explains why the driver parks there. Bill Leikam is the guy, and the Peninsula’s gray foxes are his fixation—and the motivation for his repetitive routine. Every afternoon, Bill makes a series of stops to set up eight field cameras in the Palo Alto Baylands Nature Preserve between San Francisquito Creek and Adobe Creek. And early every morning, he swings back to pull out camera SD cards and tuck all the gear back away. Each round takes up to 90 minutes, and he’s not slacking off in the time in between. Bill also spends at least two hours a day reviewing and logging all the footage from the night before—his highly-trained eyes are honed to catch any activity, any sign, of a gray fox ambling by.

Growing up in Watsonville, Bill encountered his first gray foxes by a creek near his home. Although instantly enthralled, he didn’t think much about them as he moved on with his life, heading off to college, getting married, raising children and teaching English for 38 years at Cupertino High School. Shortly after retiring, he became an avid birder, a hobby which regularly drew him to the Baylands Nature Preserve.

In 2009, en route to a favorite eucalyptus tree to watch for Bullock’s Orioles, “I came around the corner on this old dirt road, and there ahead of me on the other side of the gate was a gray fox,” he remembers. Bill got close enough to take a photo, and then the fox “stood up and walked back into the brush nonchalantly.” The fox’s surprisingly calm demeanor piqued Bill’s interest, and he returned again, and then two more times, in hopes of another sighting. His fourth attempt paid off. In the same area of brush, he once again spotted the fox, only this time, three little fox pups came out as well. Curiosity took over. “I was hooked,” Bill says. “I stopped birding and started going there to jot down what the foxes were doing and that led to where I am today.”

Having logged nine years of intense field study since that first sighting, along with founding the Urban Wildlife Research Project (UWRP), Bill is widely recognized for his unprecedented research on the behavior of the gray fox. However, he scoffs at being called an expert. “The wildlife are my teachers, and I’m their student,” he says. “Those foxes have a lot to teach me yet.”

As Bill talks about gray foxes, it’s easy to understand his fascination. Part of the Canidae family that includes domestic dogs, coyotes, wolves and jackals, the gray fox is the oldest canine in the world, with a lineage dating back 10 million years. Sized like a cat, gray foxes hook their claws into bark to scamper up trees, a rare ability shared by only two other canines, the Southeast Asian raccoon dog and the African bat-eared fox. Above all, the gray fox is adaptable, an especially keen trait given the need to adjust to increasingly urban environments. On the Peninsula, the gray fox hasn’t just adapted—it has actually made itself indispensable. “It’s what you call a keystone predator,” Bill explains. “That means they have a larger impact on the environment than one would expect from such a small animal. They are critical to keeping the region’s wildlife in balance.” And that’s where Bill’s current research comes into play. In late 2016, the gray fox population he was tracking in the Palo Alto Baylands Nature Preserve got hit by canine distemper, a disease that wiped out more than two dozen gray foxes in a six-acre area. In their absence, other species have exploded within that geography—including rodents, lizards and jackrabbits, which are having a field day at the nearby Palo Alto Airport. The issue is, gray foxes can’t just be transplanted back into the area. They are adamant about choosing their own turf—a process that starts with a litter in April, culminating in December, when the young foxes leave mom and dad, dispersing to find their own mates and territory.

So, Bill keeps vigil. Whereas before, he would log observations on gray fox parenting and territorial behavior, now he watches for any sign of the gray foxes coming back. He also keeps up his work with UWRP, and gray fox followers in other areas regularly report sightings to him—checking in from East Palo Alto, Redwood City, Moffett Field, Sunnyvale, the East Bay and even Gilroy and Marin. He’s happy there are healthy populations nearby, but the Palo Alto Baylands Preserve remains his focus. “I need to continue monitoring that area because when young foxes do come in and have their own pups, we’re going to put GPS-tracking collars on all of them,” he explains. According to Bill, the learning from that will be invaluable, showing which corridors and pathways are open and flagging the pinch points that impede wildlife from moving through, endangering both animals and the area’s environmental balance.

Last year’s watch came up empty, but with December here again, Bill has reason to feel more encouraged. Along with the nightly parade of raccoons, in late October, he started spotting a single gray fox passing through, injecting a renewed sense of purpose into his steadfast routine. But even better than seeing one, will be seeing two. “If we get a pair out here, that means they’re going to stay.” Back in 2013, when Facebook discovered a family of foxes on their original Menlo Park (MPK) campus, the company called Bill Leikam asking what to do. His advice? Leave them be. Facebook did more than that. As CEO Mark Zuckerberg posted at the time, “The Facebook foxes that live on our campus are pretty amazing. It makes me happy that we got our campus certified as an official wildlife habitat so these guys could stick around.” As part of the official welcome, the foxes even got their own Facebook account, FB Fox, which set the guidelines for Facebook’s staff: “Share your celebrity sightings here! Please honor the foxes. No chasing or feeding—just mutual respect.” Over the years, Facebook’s foxes have gotten plenty of likes and comments, with more than 100,000 followers now tracking updates as they hang outside conference rooms, perch on outdoor furniture and cross campus paths. In the ultimate compliment to their hosts, when Facebook expanded its headquarters and opened buildings MPK 20 and MPK 21 at 1 Facebook Way, a new family of gray foxes moved right in, making themselves at home in the acres of lush rooftop gardens with hundreds of trees. Visit facebook.com/MPKFOX to check out their latest antics.

How do you tell if you’re seeing a gray fox?

Visit urbanwildliferesearchproject.com for updates and to support Bill’s efforts.