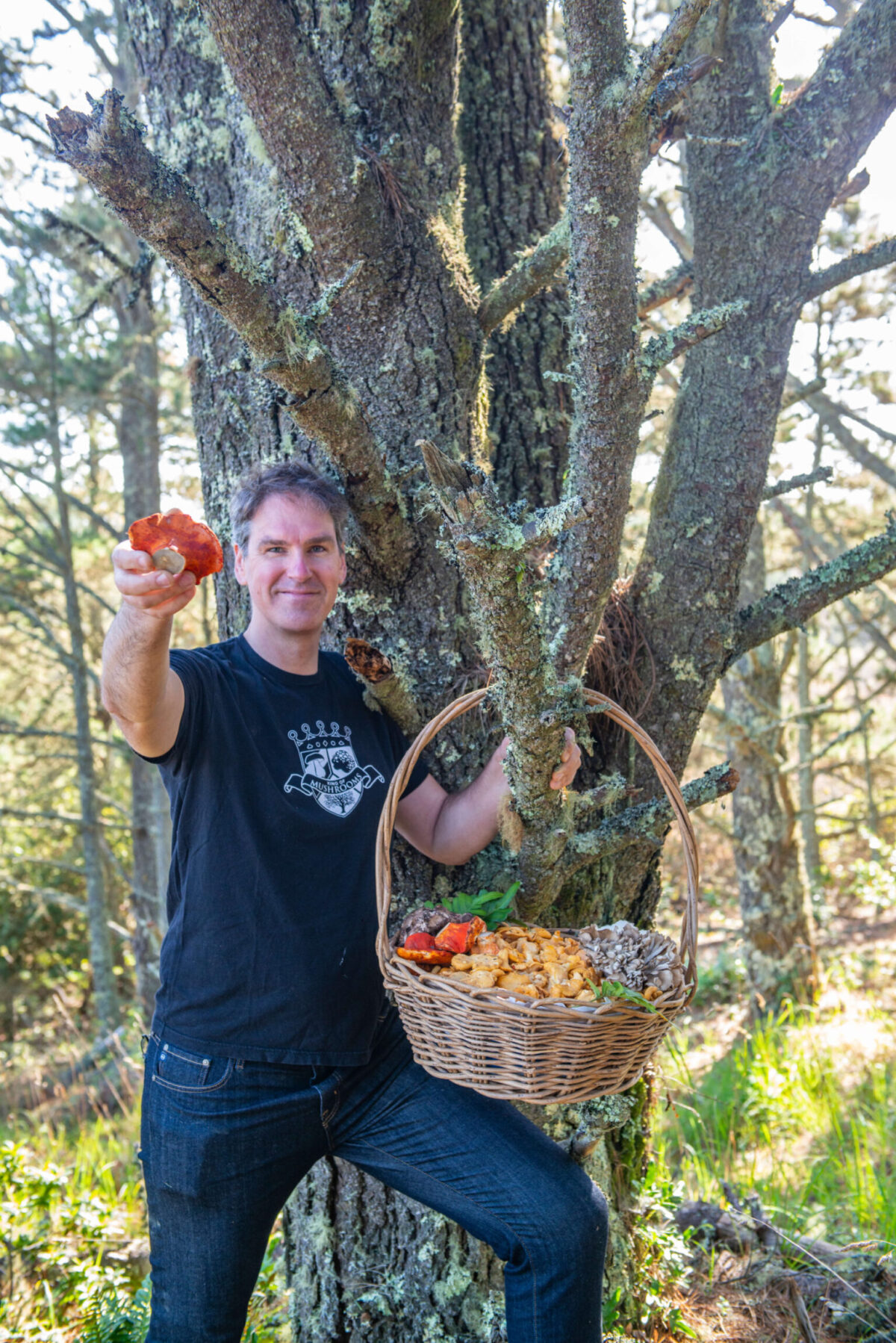 Spend a morning foraging for mushrooms with San Mateo’s Todd Spanier and the line between hunting and gathering begins to narrow.

Admittedly, mushrooms are immobile and exist within an entirely separate kingdom from animals, but successfully pursuing them requires trailside techniques akin to tracking prey. You must read the subtle signs scattered in nature, and Todd is well versed in this literacy.

The lifelong forager and fungi aficionado expounds knowledge while guiding tours into the brush across the Bay Area and nearby counties. He passionately relays advice (and indications of toxins or poisons) from his years of foraging to spot and identify edible mushrooms. He learned the art of rummaging through the forest from his grandfather, whose lessons continue to echo decades later.

“Know the tree, know the mushroom,” Todd instructs during a recent forage, repeating an axiom his grandfather Ed Marcellini passed down to him. Todd shifts his gaze to a towering Monterey pine tree, a coniferous evergreen native to the California coast but now found globally due to its use in lumber. The Monterey pine is also a fertile host for growing the coveted porcini. 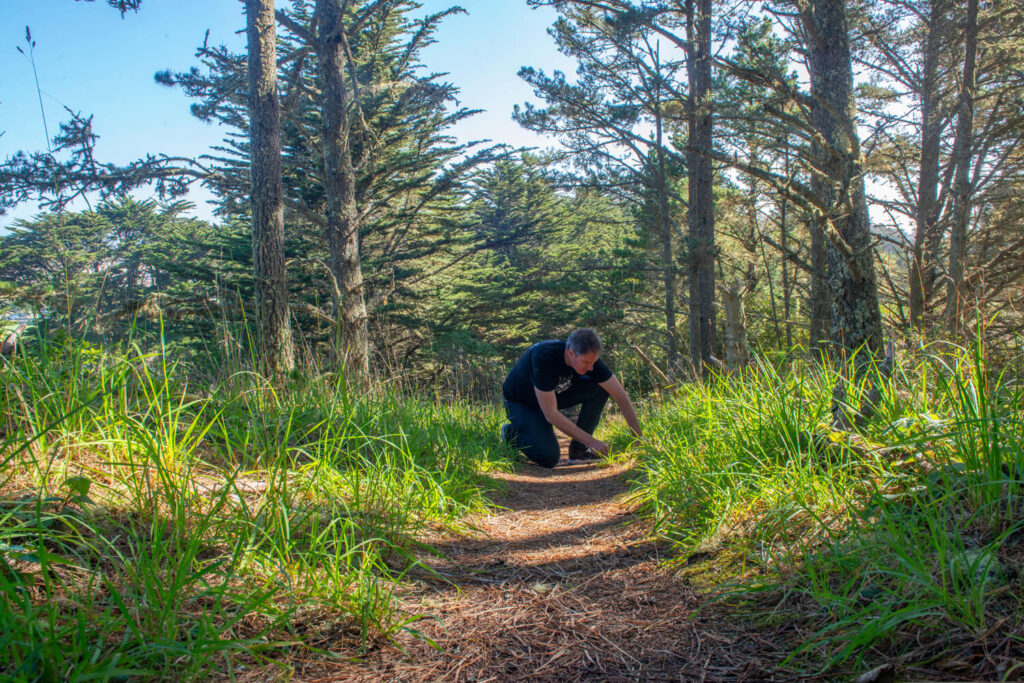 Todd points out the “drip line,” how the pine needles droop above a patch of toyon shrub to create a mossy pocket of moisture on the forest floor. “Think of yourself as water,” Todd says. “‘Where would I flow?’” With keen eyes, he spots a mound ever-so-slightly rising within the greenery. Peeling back a layer of foliage reveals a button-sized mushroom packed with nutrients and umami flavoring, ready for the picking. He adds it to his pile and returns to the endless hunt.

Standing nearly seven-feet tall, Todd is easily spotted among the trees and brush, but as it has been since he was five years old, the outdoors is his kingdom. Since 1996, he’s reigned as the King of Mushrooms, a royal title that’s self-anointed but continuously reaffirmed each time he treks out to forage and returns with a bounty of mushrooms.

The mushrooms that Todd finds, along with the species he works with farms to grow, are sold wholesale to local markets such as Bianchini’s and Draeger’s as well as celebrated restaurants across the Bay Area including The French Laundry, Gary Danko and Manresa in Los Gatos. Along with his wife, Cristina, Todd will travel to fungus festivals throughout the West Coast to educate and celebrate the wild food. 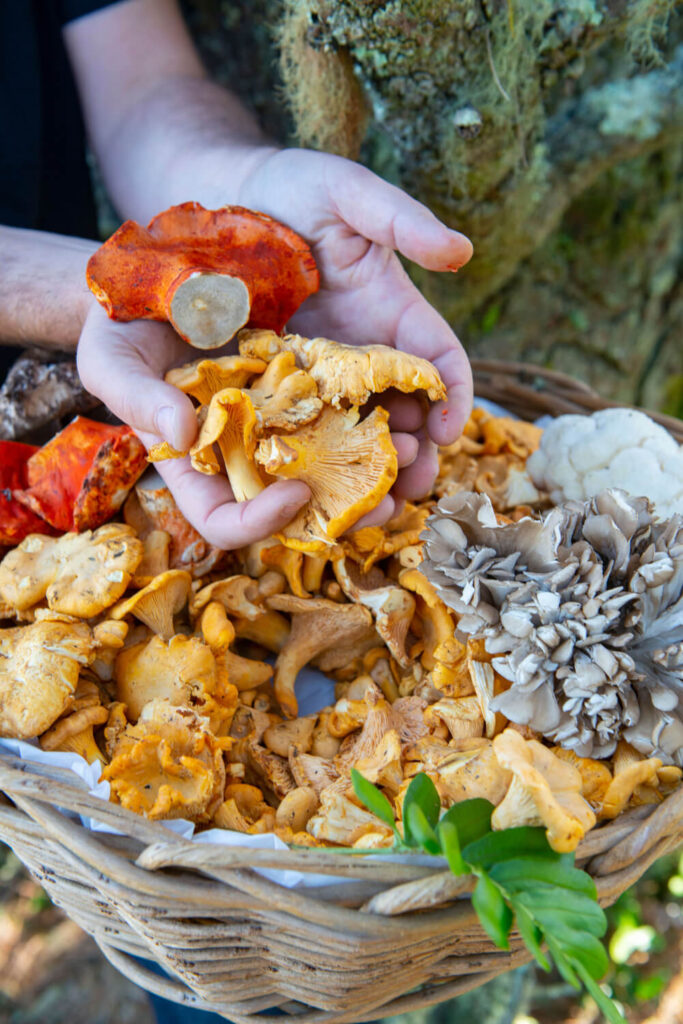 Todd also leads foraging classes through the service ForageSF where folks can sign up for a seasonal excursion to hunt, gather and prepare mushrooms. It’s during these outings when his encyclopedic knowledge of fungi pours out of him between amusing anecdotes of a life in restless pursuit.

Well before Todd was born, his grandfather Ed would traverse the Apennine Mountains near Cinque Terre in Borgo Taro, Italy, in search of porcini. After immigrating to the United States, Ed worked in the flower industry but never ceased foraging. By the time Todd was old enough to haul a sack, he’d join his grandfather in the mountains outside his home in Burlingame to learn the skill.

Their family often played a little game: whoever found the most mushrooms or the largest individual one would earn the title King or Queen of Mushrooms and would not have to clean or cook. Todd relished in delight whenever he earned the crown. 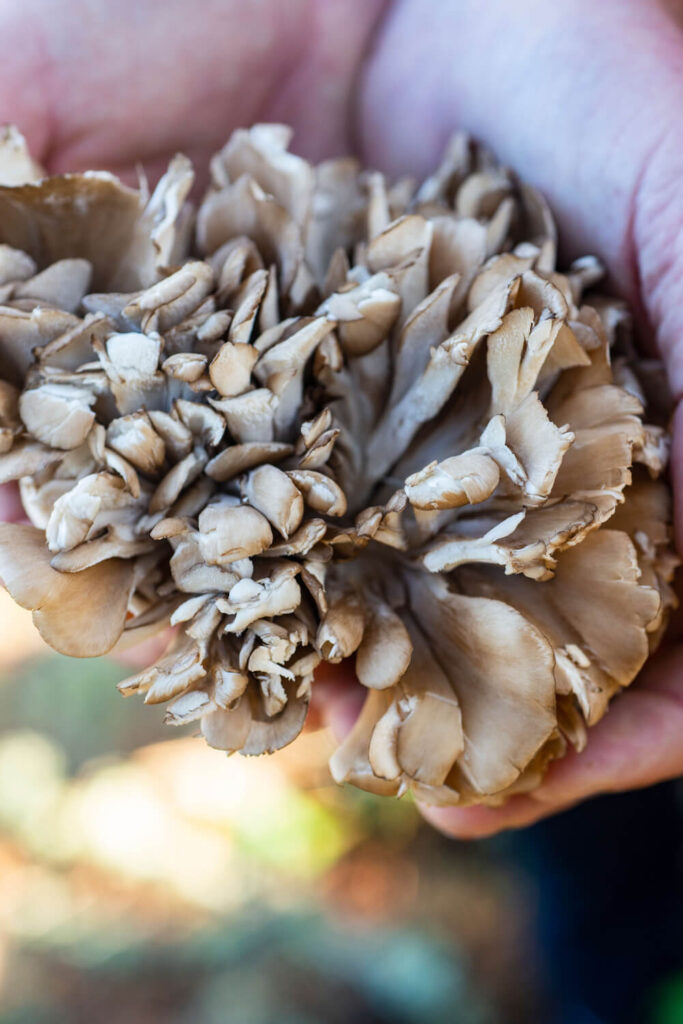 During Todd’s formative years, two events shaped Todd and led him on his path to mushroom royalty.

As a teenager, he pulled a ligament in his leg and had to abstain from playing basketball until he recovered. His creative family championed a DIY ethic (Todd brewed his own beer in high school), so in his downtime, he ventured back into the hills to pick mushrooms.

Soon, the family kitchen was overflowing with mushrooms. The pantry, freezer and fridge were all stocked with foraged picks in various stages of the drying process. Todd’s mother grew weary of the overstock and drove him to a new restaurant in town called Ecco. Todd approached the owner, Chef Tooraj Sharif, with a bag full of freshly-plucked mushrooms and the restaurateur was quickly impressed.

“He led me to the cash register and took out a $100 bill,” Todd remembers. “It was my first sale! When I got back to the car, my mom drove me straight to the bank to have them break it up into $5s. Then she said, ‘Now this is your lunch money.’” 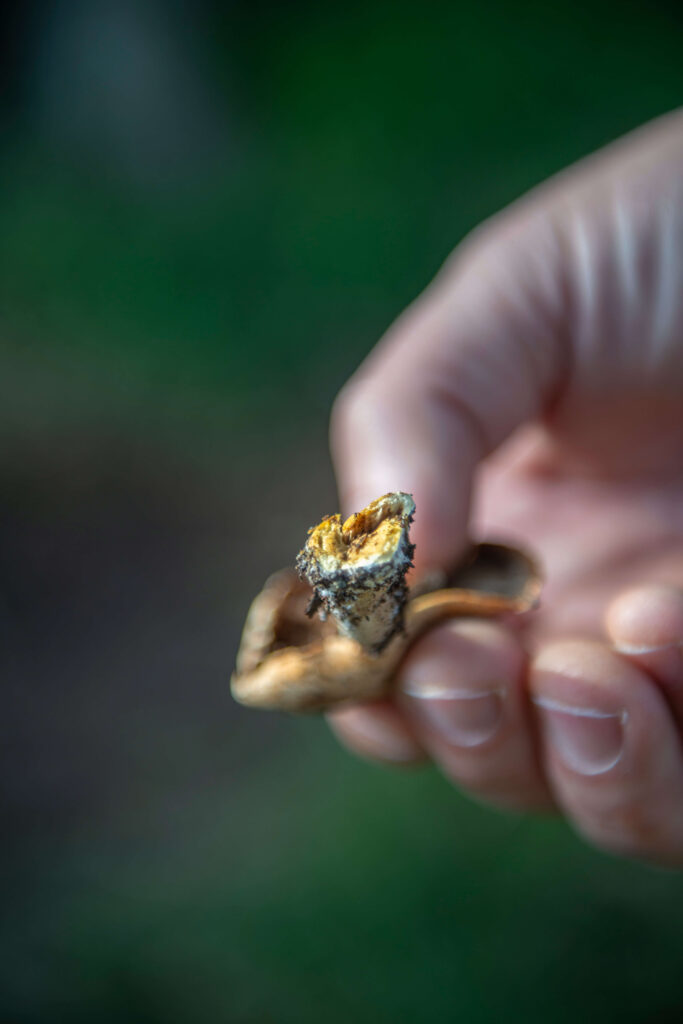 Later, when he lived in Florence, Italy, for six months, Todd spent the weekends visiting his family in the nearby mountains. The reconnection to his roots was enriched with each forage for mushrooms. In town, he noticed boutique stores that specialized in mushrooms and the heightened reverence for the fungi in Italian culture.

The calling for a career in mushrooms came to a head not long after Todd’s return to the Peninsula. The mushrooms he foraged for and sold to restaurants supported him while he took classes at Skyline and Cañada Colleges. Todd remembers sitting in a business ethics course when his pager kept buzzing. Finding a nearby telephone, he returned calls to eager chefs and before Todd knew it, he was a full-time mushroom forager.

During a recent hunt, Todd wore a custom t-shirt for his King of Mushrooms business as he hunched over a mossy and moist plot. On the back of his shirt is the holy trinity of mushrooms: chanterelle, porcini and morel. He explains how porcini grow near Monterey pine trees and since these trees are grown worldwide for their lumber, porcini have become a global treasure.

“Mushrooms are a reconnection to my roots and heritage. You can go to Italy or South Africa to pick chanterelles. They’re throughout Europe and even Korea. They grow everywhere, except Antarctica. People who love nature, love foraging. We pretty much know all of the plants and animals but fungi are underground,” he says, noting that there are new species of mushrooms discovered every year.

“When you get out into nature, it puts you in the moment. After all, we’re all hunters and gatherers.” 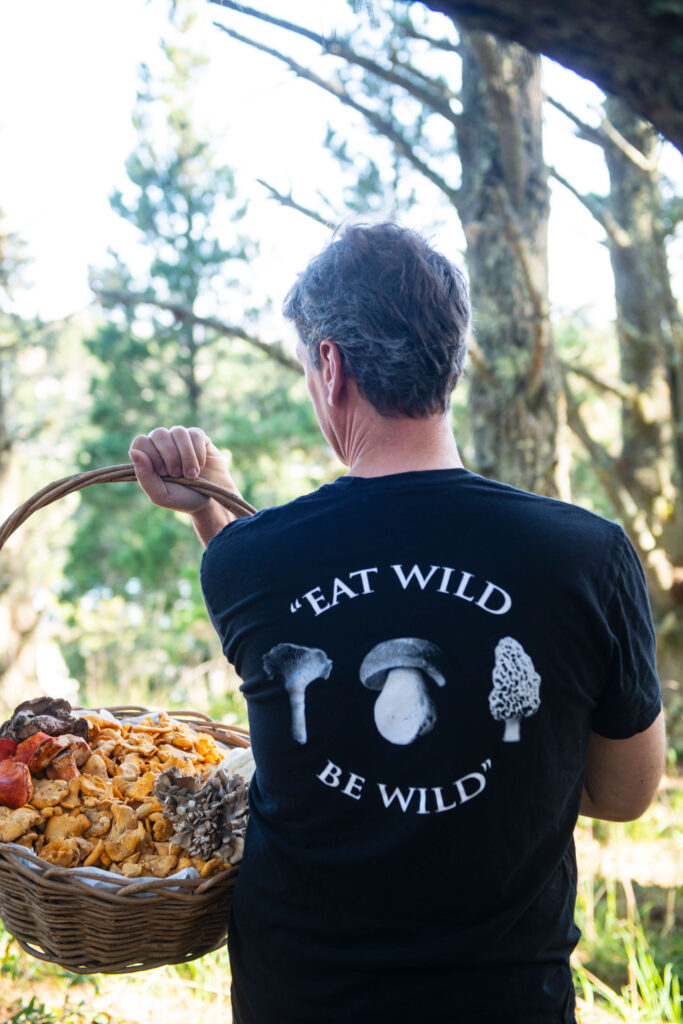