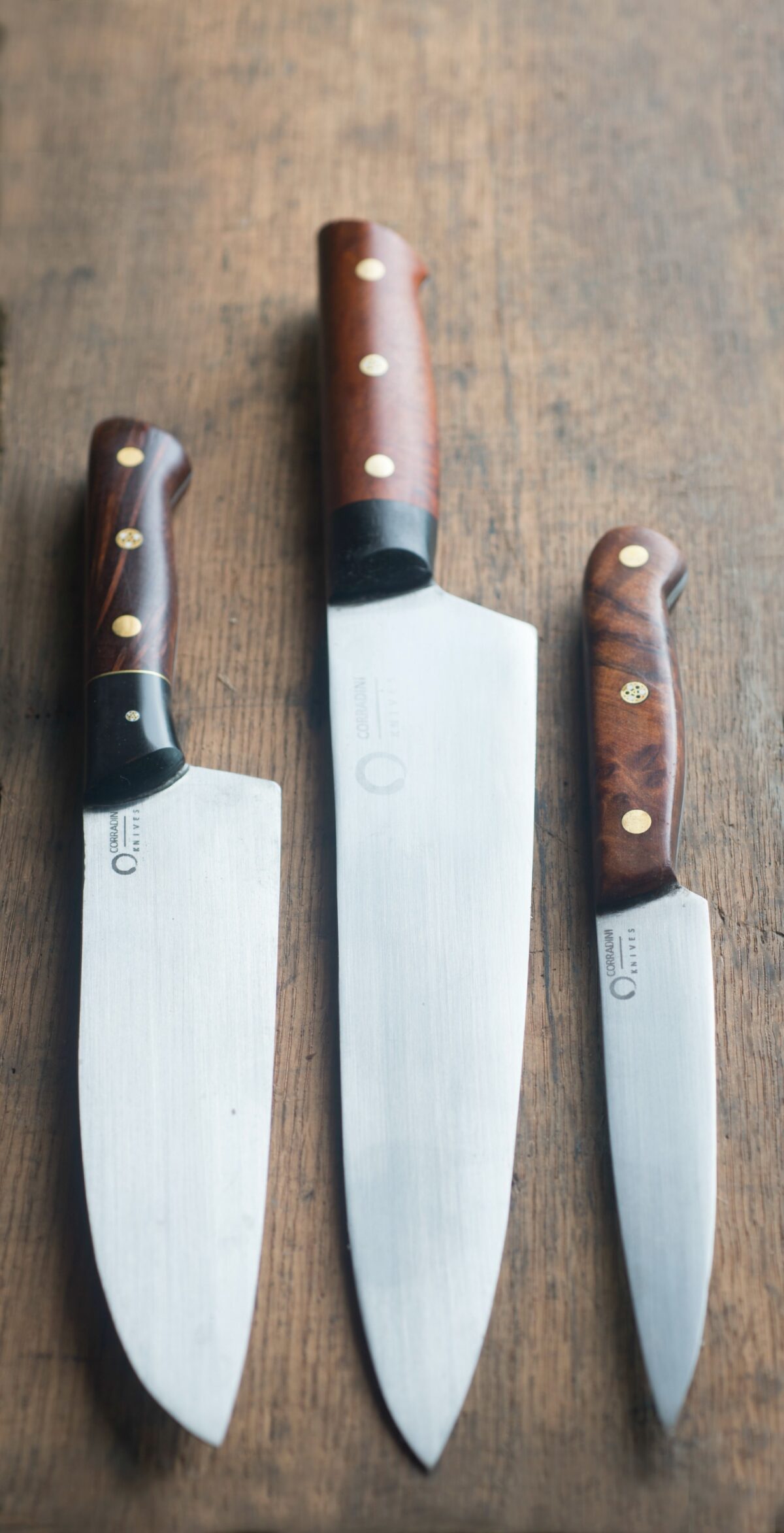 Andrew Corradini’s about-face journey from high-tech marketing executive to chef’s knifemaker is a fascinating one; a brilliant example of the “spirit of the Peninsula” —where anything is possible.

After graduating from Wharton with an MBA in 1992 (with a major in entrepreneurial management and a minor in management of technology), Andrew’s goal was to IPO a VC-backed technology company as its CEO. He’d accumulated a lot of experience in programming and the internet before most people had even heard about it.

Corradini was recruited from Salt Lake City, where he is from originally, by a company in Los Angeles. There, he met his wife (through a dating site, which at the time was still a pretty dodgy thing) and together they moved to the Bay Area, eventually landing in Hillsborough where they currently live, to begin their new chapter.

Even though Corradini was not in a dot-com business, the internet crash still brought his professional rise to a screeching halt, as there was a limitless supply of marketing VPs all over the Bay Area. Corradini’s wife, Valerie, was in finance and still experiencing a lot of success, so when the couple’s first son was born, Andrew stepped into the role of Mr. Mom without a clear plan to go back into marketing again.

Shortly thereafter, though, Andrew did attempt re-entry into the rat race of Silicon Valley. Between diaper changes, in his garage workshop, he invented a green process to turn waste sewage gas methane (which has 27 times the greenhouse gas impact of CO2) into clean, high-octane gasoline. He started a company, hired a CEO and CTO, raised $1.2 million, patented his process, and built a pilot plant at the local sewage plant. The company had received Series A term sheets from top-tier Sand Hill Road VCs and was in late-stage negotiations, when the CEO unexpectedly died of a heart attack at 46. The funding collapsed, and although Andrew tried a re-start for about a year, he eventually sold the assets, disappointed and disillusioned. That’s when he says he knew for sure that he was not meant to be in the corporate world.

After kicking around a bit with what he says was “way too much self-pity,” Corradini realized that what he most enjoyed was simply working with his hands to make things. That meant both in his workshop, where Andrew used skills that he had learned from his grandfather who was a woodworker, and also in the kitchen; cooking is something Andrew has loved since he was a kid. In fact, he still has the copy of the My Love to Cook Book that his mom gave him for his seventh birthday. His mom (a single mother and the mayor of Salt Lake City for eight years despite being neither Mormon, Republican nor male) was a terrible cook, and he learned early on that if he cooked dinner himself, it would be exactly what he wanted to eat.

About 20 years ago, Andrew read a magazine article about a man, Bob Kramer, who’d been a magician and a Ringling Brothers’ circus clown, but hadn’t found a real passion in his life until he discovered knives. Andrew’s wife put in an order for one of Kramer’s knives for $700 or so. Andrew was able to speak with Kramer directly, who agreed to custom-forge a knife which Andrew still loves and uses.

Thinking back on that experience with Kramer led Andrew to realize he’d always had a knack for making things himself and would love to spend his days in a shop full of dangerous tools. From there, Andrew developed his own style—drawing from both classical French and Japanese profiles—rather than Kramer’s more typically German style.

After the disillusionment of his latest venture, about 18 months ago, Valerie was prodding Andrew to decide what he wanted to do next. “What do you want to do with your life and when are you going to get up and go do it?” she asked. “I want to make knives!” Andrew exclaimed without hesitation.

Now a full-time knifemaker since 2017, Andrew’s bespoke chef knives have been used by a Michelin chef, he’s been commissioned to make specialty Japanese butchering knives for some top San Francisco chefs and more. He uses exotic woods, 1500° heat-treating and ever-expanding custom designs. “I didn’t set out to be a knifemaker,” Corradini says, “just to make myself a knife.”

Andrew’s sister, a Nike executive with a side passion for photography, has documented his work. He’s recruited his two sons, ages 14 and 11, to be his social media marketing team. He’s always done things his own way. And with a waiting list of up to nine months for one of his pieces, we suggest you visit corradiniknives.com if you know someone who’d appreciate one as a gift next year.