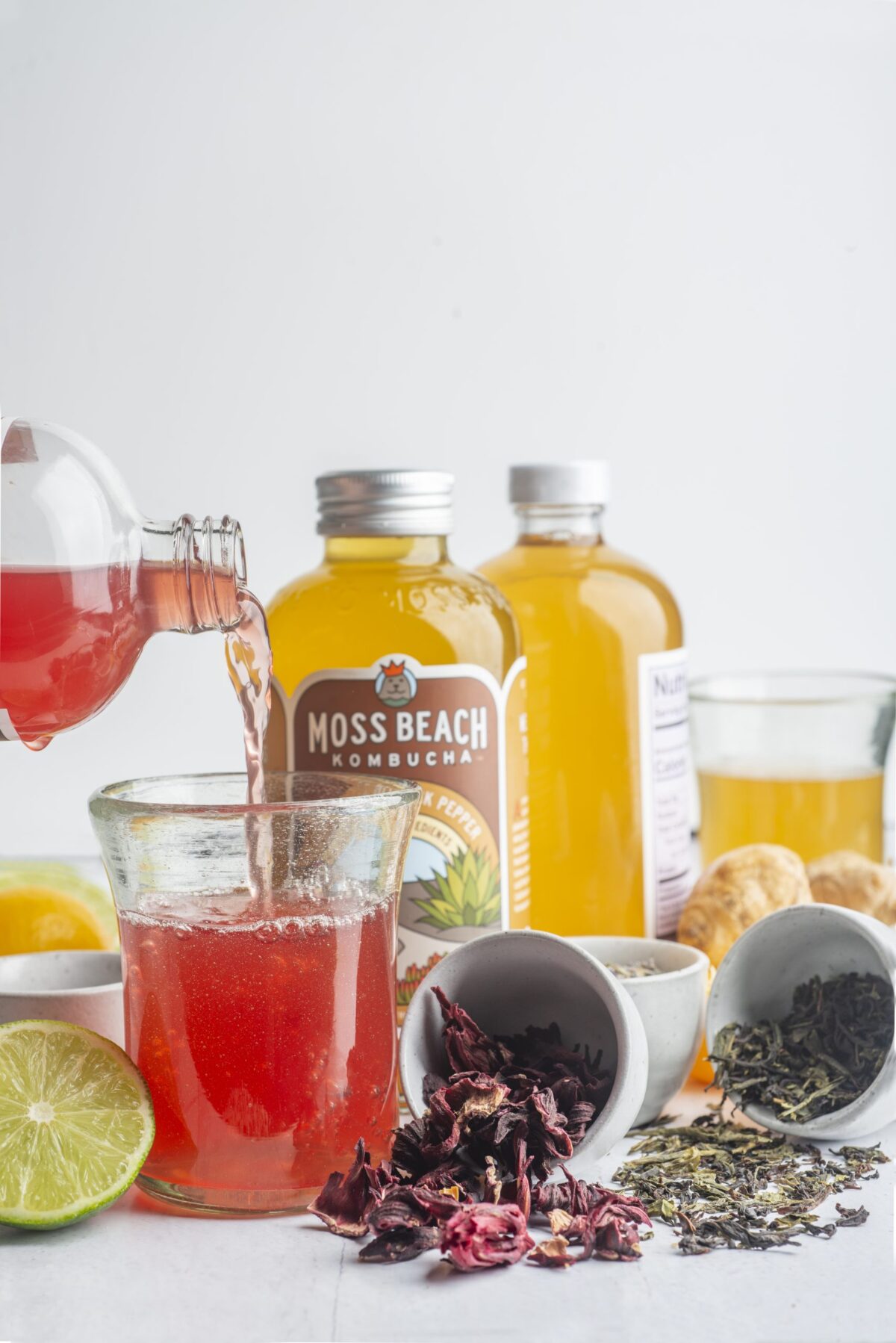 Less than two miles from Fitzgerald Marine Reserve’s teeming tide pools of sea creatures, Douglas Nelson reaches down into a 600-gallon fermentation tank and pulls up a slimy, gelatinous mass that’s floating on top. Needless to say, it bears zero resemblance to anything you would want to eat. “It looks really gross,” he concedes. “It’s squishy and feels like a jellyfish.”

And that’s being generous.

The goop Douglas is showing off has an equally unappealing name: SCOBY, which is an acronym for “symbiotic colony of bacteria and yeast.” To be clear, this is no failed science experiment. When combined with sugar, tea and water, SCOBY is actually the magic ingredient in the purportedly health-enhancing fermented beverage known as Kombucha.

Kombucha here. Kombucha there. Kombucha everywhere. Walk down your supermarket aisle, and you’ll find a refrigerator case devoted to this wonder drink. It’s on tap at the gym, ready for grab-and-go at the corner grocery and on the menu in local cafes and restaurants. In Douglas Nelson’s case, he’s brewing and bottling it right here on the Peninsula under the brand of Moss Beach Kombucha (MBK). 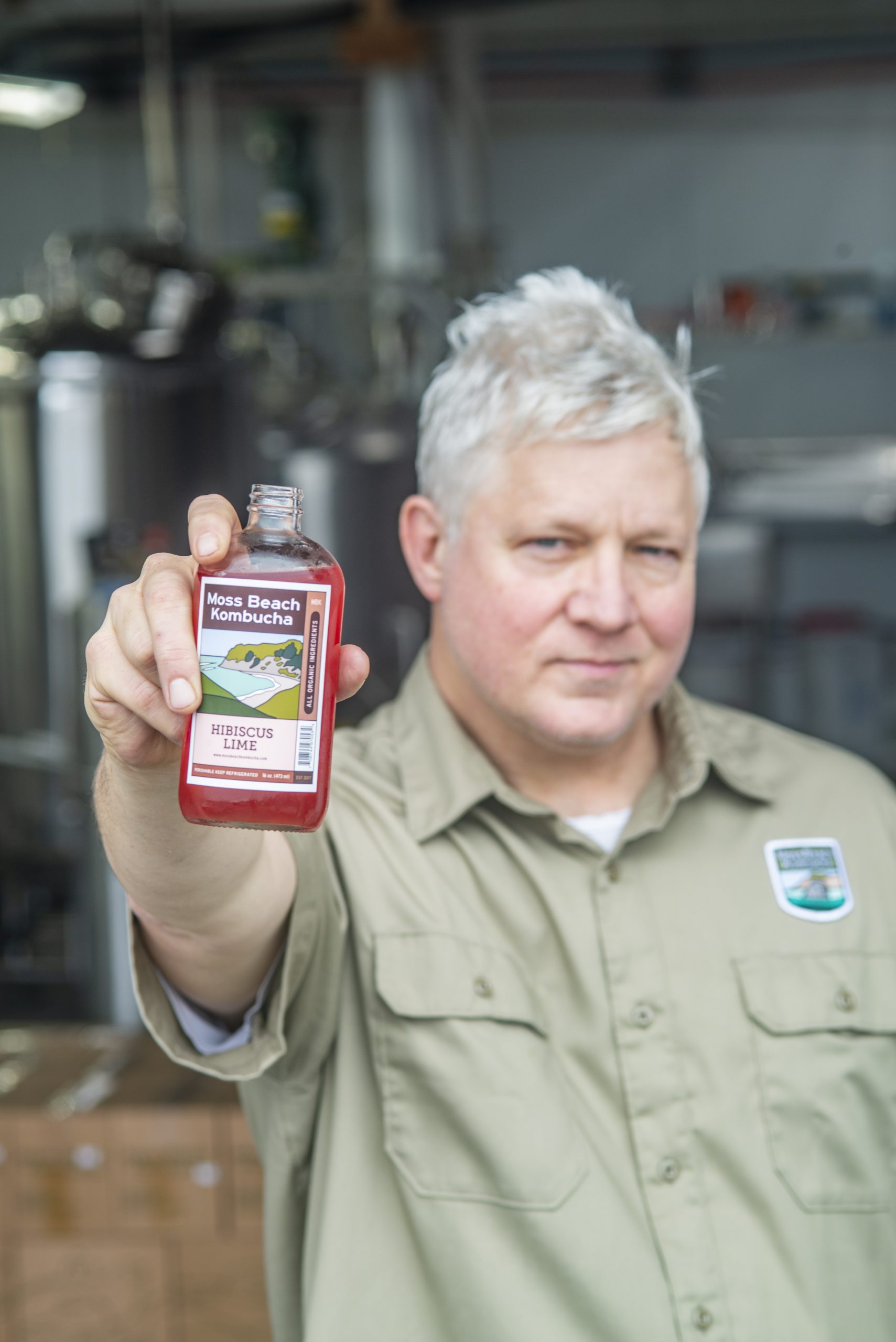 To backtrack (and we’re talking hundreds, if not thousands of years), the exact origins of Kombucha aren’t known—although the effervescent tea is most frequently traced to Manchuria, Russia and Eastern Europe. The name Kombucha means “kelp tea” in Japanese, adding yet another layer to the mystery. (There’s no kelp involved here.)

Douglas first encountered Kombucha in 2010, when a friend who brewed her own Kombucha gave him a sample. He was immediately hooked. “I said, ‘You’ve got to show me how to make it,’” he recalls. “So she gave me her SCOBY and set me up. Kombucha is one of the classic communal hobby foods. You need to know somebody to get started.”

How Douglas went from homebrewing for family and friends to becoming the Peninsula’s first Kombucha manufacturer is part of a bigger roundabout story. Originally from Louisiana, he moved to New York after earning a theatre degree in college. While his desire to pay the bills eventually led to data processing work, the through line in it all was the pleasure he found in the flavors of food. After his wife’s work brought the couple to San Francisco, Douglas got the opportunity to chase his passion and pursue a culinary school degree. He graduated in late 2016 and realized that while he loved to cook, he didn’t want to be a professional chef: “I thought, ‘I make good Kombucha. Maybe there’s a business to be had.’”

Douglas and his wife had relocated to Moss Beach in 2013, and he sensed a synergy with his Kombucha epiphany. “Moss Beach is that place where you go to rest and become a new person. In a very small footprint geographically, there is rejuvenation,” he says. In January 2017, he launched Moss Beach Kombucha with a parallel mission. “I would like to restore you a bottle of Kombucha at a time,” he states simply.

Naturally rich in probiotics and antioxidants, Kombucha has garnered its share of health claims—from restoring your gut biome to disease prevention. Douglas is careful not to push the miracle elixir agenda. “There are apocryphal stories of it curing various things and there’s plenty of skepticism,” he notes. “I drink Kombucha for pleasure—not for health. The only thing that I can say experientially is that I feel better when I drink it.”

Back to MBK’s fermentation tanks—and that symbiotic colony of bacteria and yeast. It takes about two weeks for each batch to reach just the right level of sugar and acidity. Douglas uses only organic ingredients, many scooped out of fragrant large bins, including his proprietary blend of black and green tea, celery seeds and hibiscus flowers. When it’s time to bottle, the fermented tea mixture is strained to filter out any pieces of SCOBY and pumped into the mixing tanks, where Moss Beach’s unique flavor profiles are added. Whether it’s Hibiscus-Lime, Meyer Lemon-Ginger-Cayenne, Celery-Lavender or Turmeric-Black Pepper being brewed, the final steps include bottling into pint-sized glass containers, labeling, capping and shrink-wrapping.

And then comes the tasting. Which is what enticed Douglas in the first place.

Twist the cap to break the seal—and there’s that quintessential sound of carbonated pressure being released. Hssss! The first sip is bubbly with a complexity of flavors to process and absorb, followed by a tantalizing tickle at the back of the throat and then a satisfying settling into the stomach. 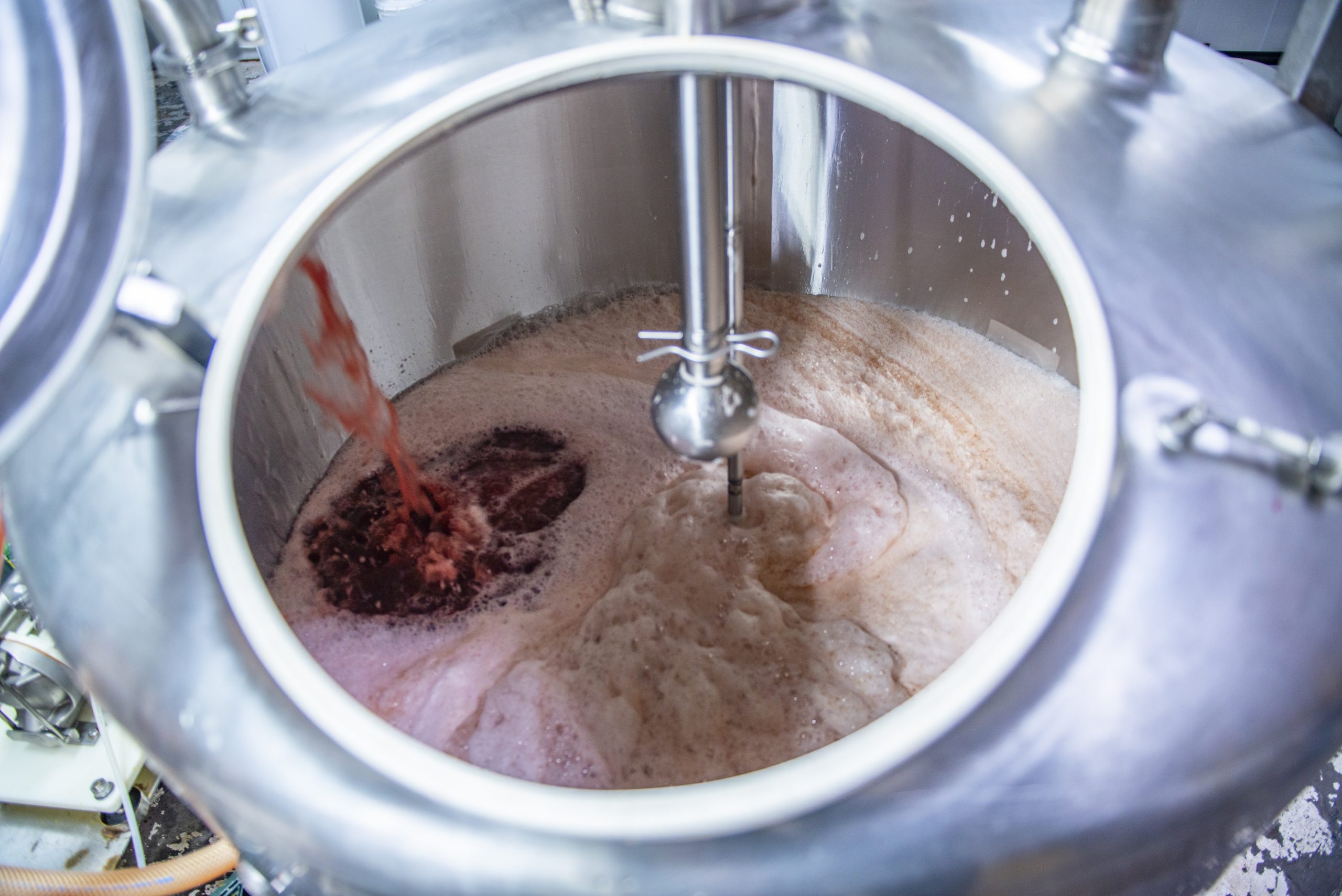 “What you get from Kombucha that you don’t get from any other non-alcoholic drink is depth,” Douglas says. “When you’re drinking juice or Coke or something, you’ve got a single dimension. Kombucha has at least two, painting in broad strokes, dimensions: sweet and sour. There’s a vertical matrix of interest in the mouth and that goes back to why I love it. There’s just a lot going on in there—it’s exciting.”

After opening in 2017, Douglas started out by self-distributing and working the farmers markets. Given that he considers himself a culinary artist (along with musician and writer) more than a “business guy,” Douglas is thankful for the Kombucha version of being discovered. “A distributor bought one of my bottles and contacted me out of nowhere and said we’d like to represent you,” Douglas says. “That was a Cinderella moment for me.”

MBK is now sold in about 120 stores across the Bay Area, including Draeger’s Markets, Bianchini’s Markets and Piazza’s Fine Foods. But Douglas acknowledges that the company’s future growth likely hinges on bringing in additional resources. “I would be open to a partner who complements my skill set,” he says. And while he’s intellectually curious to see how far Moss Beach Kombucha can go, he’s also content with whatever size footprint the company creates. “It’s my mission in life to create and share beauty,” he explains.

For right now, that means Kombucha, and he encourages anyone who hasn’t tried it to give it a shot. How much should you drink? “Some folks feel great having half a pint a day, some drink half a gallon,” he says. “The only real answer that makes sense to me is to follow your gut. It’s a cliché, but it’s true. How do you feel? Your gut will tell you.”