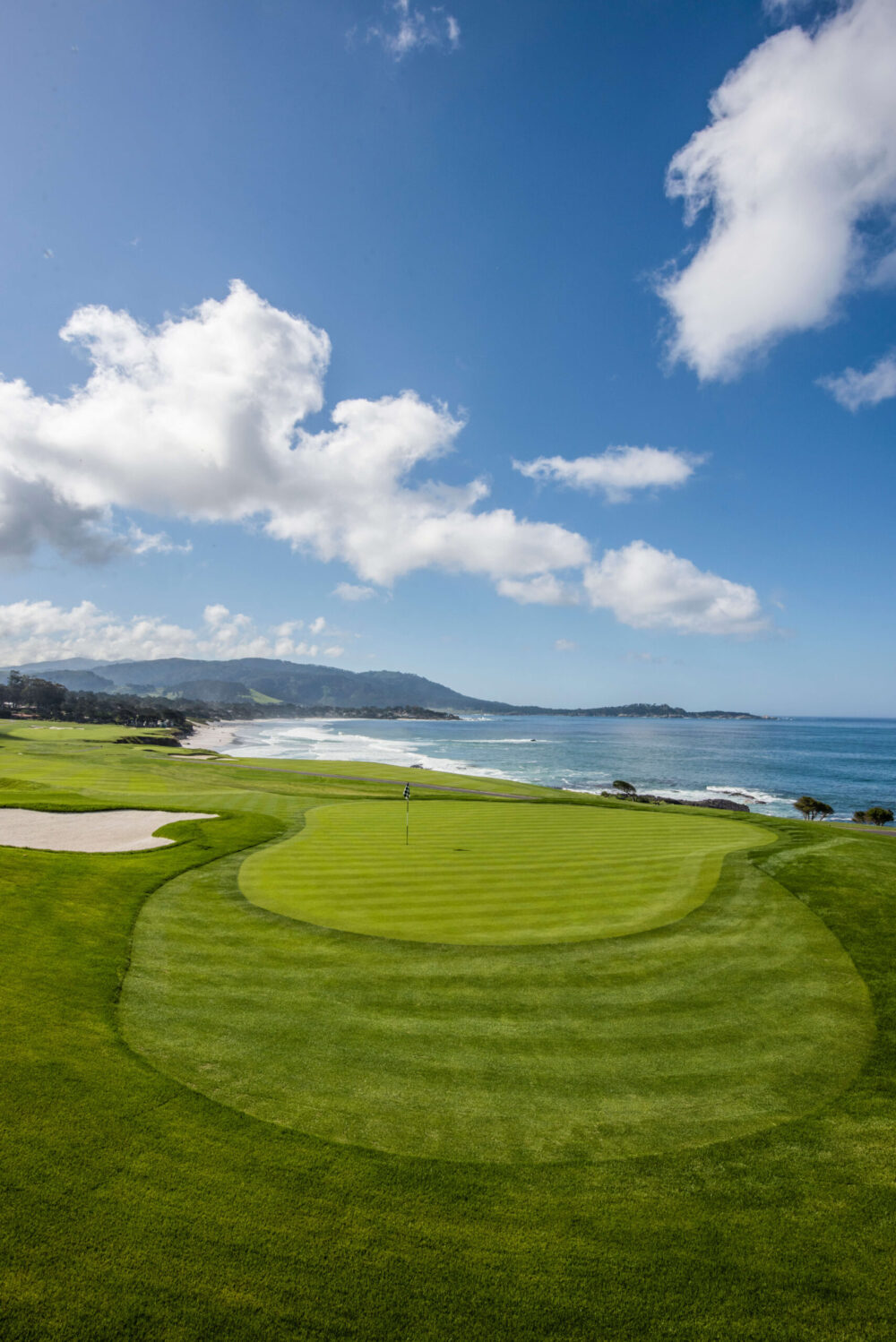 Pebble Beach looms large in my life. My father, a scratch golfer, played there and together with my mother attended the Crosby Clambake—now the AT&T Pebble Beach Pro-Am—over the years. Somewhere in the boxes in the garage is a photo of them with Bing Crosby himself. So why did it take so long for me to visit there? But, there I go, getting ahead of the story.

An Environmentalist and a Crooner

Pebble Beach’s earliest development began in the late 18th century. But it got going in earnest with the arrival of environmental conservationist Samuel F. B. Morse in 1915. Known as the Duke of Del Monte, he owned and preserved thousands of acres—and also developed golf courses.

Fast forward to the 1930s: Bing Crosby was not only a famous actor and singer, he was also a two-handicap golfer. In 1937, he invited fellow Hollywood stars to play along with golf pros at Rancho Santa Fe in Southern California. He put up the $500 prize money himself and treated participants to a beachside clambake. In 1947, he moved the tournament to Pebble Beach, where it was officially known as the Bing Crosby National Pro-Am. 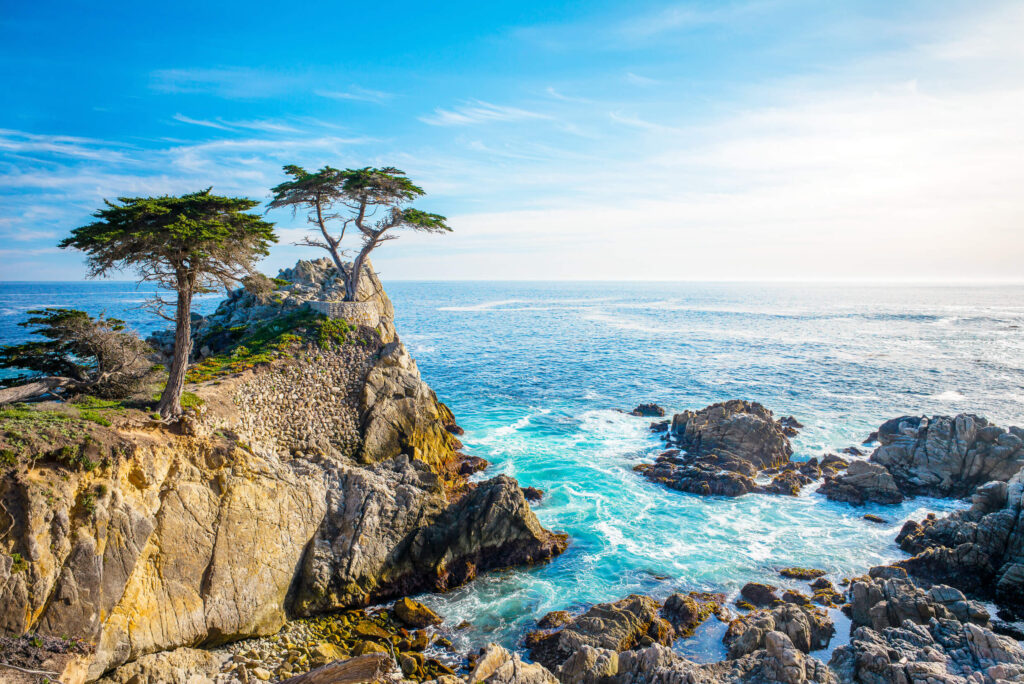 Bing and his wife Dixie Lee, along with their sons Gary, Dennis, Philip and Lindsay, lived for a time in the late ’40s in a two-
story, modern house overlooking the Pacific Ocean on Pebble Beach’s 13th hole. One of the marshals pointed it out to us, although it evidently looks different now than it did then. Dixie Lee died of cancer in 1952, and in 1956, Bing married Kathryn Grant. They, along with their three boys, eventually settled in Hillsborough.

We were booked at the Inn at Spanish Bay but followed a tip to stop at the Pebble Beach Visitor Center just north of the Carmel Gate. It’s a tip worth passing on. You’re treated to some eye-catching exhibits explaining the lore of this golfer’s paradise along with a well-known trophy you can pose with.

Cross the street and head down a few steps and you’re at the over 100-year-old Lodge at Pebble Beach. Hungry after our drive from the Peninsula, we walked down to the beach level and lunched at The Bench. Spouse Dennis chose a BLT salad, which he proclaimed to be one of the best salads he’s ever eaten. It was the start of a succession of excellent meals during our stay, including a tasty prime rib dinner at the Tap Room, now relocated outside at the edge of Pebble’s fairway one.

By entering at the Carmel Gate located at the southern end, you drive the entire length of the famed 17-Mile Drive—which surprisingly first opened in 1881—as the Inn is at the northernmost point. Using the map given out at the Gate as a guide, you can stop at the many famous spots along the Drive. The 250-year-old Lone Cyprus is about midway, and during the spring months, a stop at the Cypress Point Lookout provides a view of the harbor seal pups on the beach below.

Golf, Golf, Golf as Far as the Eye can See

Within the gates of the 5,300-acre Del Monte Forest are seven 18-hole courses and one 9-hole course. Pebble Beach Golf Links, The Links at Spanish Bay, Spyglass Hill and Peter Hay Golf Course are owned by Pebble Beach Company and are all public courses. Poppy Hills is also a public course.

Dennis, the golfing spouse, enjoyed playing Poppy Hills a year ago but the opportunity to play Spanish Bay and, even more so, Pebble Beach, was particularly enticing.

Spanish Bay is a Scottish-style links course. When golf began there in the 16th century, courses were built on rolling sandy dunes linking the land to the sea.

“The scenery is beautiful with some ocean views,” reports Dennis, who walked the course. “Due to the windy conditions, balls could disappear into areas unknown. If my shots hit the fairway with the wind behind me, the ball rolled nicely, given the short grass.”

• #5 given that the ball had to carry over the sand dunes and “then avoid three bunkers in the middle of the fairway on the other side.”

• #12 deemed “toughest on the course with a big creek right before the green.”

The next day came Pebble Beach Golf Links, which opened in 1919 and is consistently ranked among the top public courses in the country. Dennis elected to walk it as well, and I joined him.

“It was like being on hallowed ground,” he says. “That kept my concentration level high as I wanted to respect the course.”

That focus paid off with a birdie on #4. He also found success on #7, thanks to the lack of wind, which allowed the ball to fall perfectly on the green. But then came #8, a long par four with a shot over the ocean where his first ball fell.

The back nine provided additional tests:

Inn At Spanish Bay Even Better Up Close

On hikes around Asilomar State Beach in the past, we’ve glimpsed the Inn at Spanish Bay, which is about a mile inland from the coastline. In person, it’s a fabulous property.

There are garden, forest and ocean view rooms. Our second-floor room with a fireplace was the latter, and its balcony overlooked the fairway of the first hole of the golf course. If you’re going to take this expensive plunge, we recommend springing for the ocean view.

We were both struck by the professionalism and friendliness of the mostly young staff and delighted at all the art adorning the walls. Example: Every guest room boasts three paintings at its entrance and more inside.

The outdoor patio features heated fire pits, nice on what were some breezy early spring days, with a menu offering lighter fare. It’s here that the bagpiper plays nightly; people come from outside the property to listen, so tables fill up quickly.

Our room view was so nice, we ordered room service the first night. On the last night, we dined at Roy’s, featuring Hawaiian/Japanese fusion cuisine. Some people may judge a restaurant by its steak. I judge by its octopus. It passed the test, accompanied by delicious crispy Brussels sprouts. My spouse’s chocolate banana cream pie was amazing to look at and tasty to eat.

Spanish Bay is a good launching point for walks along 17-Mile Drive. I headed south first along a forested stretch of the Drive that’s actually inland and then out to the coast, passing along the Dunes Course of the Monterey Country Club. The turnaround point was Point Joe.

Reads the marker: “In the early 1900s, a man named Joe lived in a driftwood hut here, selling trinkets to tourists and tending goats. It is debated whether Joe was named for the point, or the point for Joe.”

Whichever the case, we doubt he’d recognize the place now.