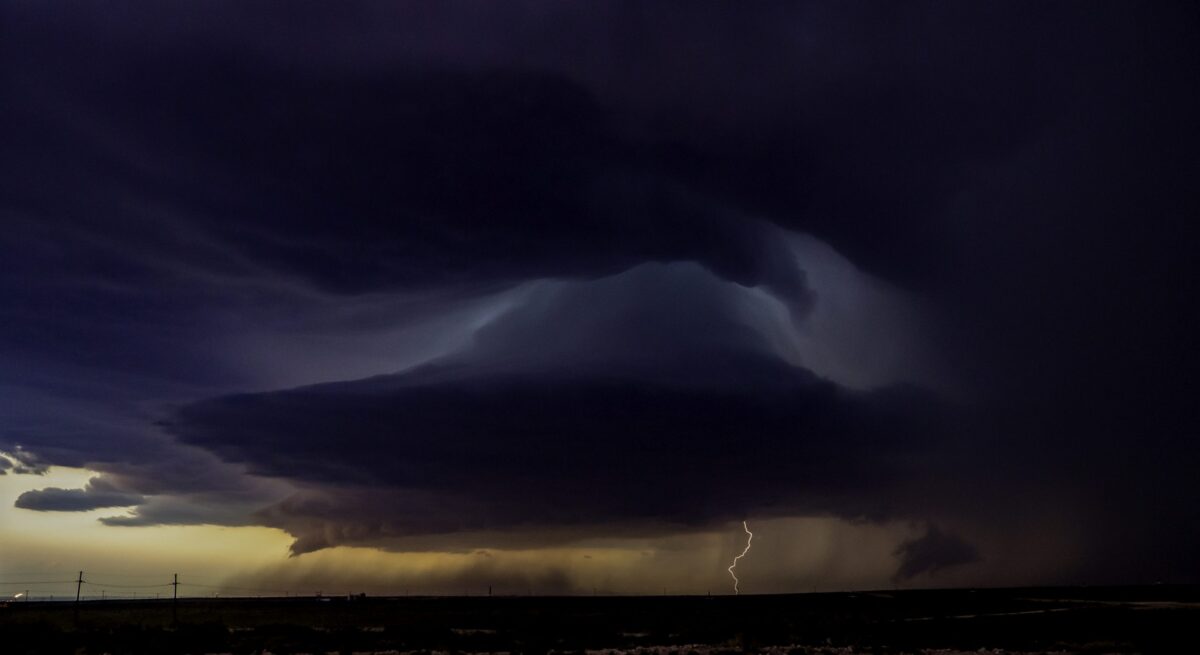 A red light suddenly flashed on the dashboard of Gino De Grandis’s pickup truck. Racing along a narrow Oklahoma road at 90 miles an hour, Gino and his fellow storm chasers knew their escape was compromised.

The tornado was barrelling down on them. And then the car battery failed. The crew abandoned the truck on the side of the road and sprinted to a nearby gas station. With no cellar or basement available for shelter, they huddled with the gas station employees in the bathroom, awaiting their fate. The tornado had the gas station in its sights, until about 100 yards away where it abruptly changed direction and spared them.

Another fortuitous break for the daring photographer.

While most human lives follow a steady linear stream of events, Gino’s is quite different. Originally from Venice, Italy, Gino hopped around the world, from one escapade to another. Now a successful Bay Area photographer and storm chaser, he describes his life in anecdotes and often speaks in metaphors—emblematic of his teeming creativity. 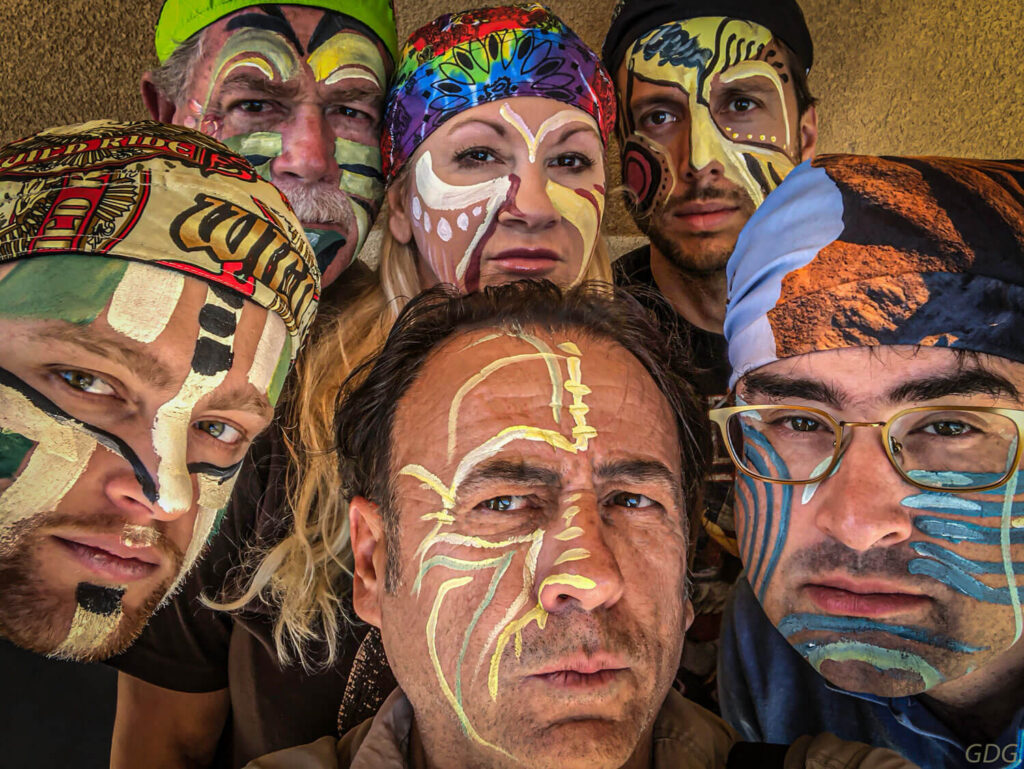 “Photography is a train running, and you can’t say, ‘Go back!’” he says, of capitalizing on chances to photograph fleeting moments. “There is no opportunity to get it back. If you miss it, you’ve got to wait for the next opportunity.”

Ever since joining the NATO Navy as a 19-year-old, Gino made a habit of saying “yes” to every professional opportunity that came his way. He has photographed everything from Coast Guard and SWAT team drills to San Francisco State University commencement ceremonies. He even photographed the Dalai Lama’s 80th birthday party in Los Angeles.

“I’ve become the Dalai Lama’s photographer when he is in California,” Gino says. “He invited me to go to his house in Dharamsala, India.”

Gino spent six years traveling through Europe making a living as a street artist. He eventually moved to the U.S., first to New York City and then eventually settling in the Bay Area to work as a chef.

While he had always flirted with photography, Gino took a while to commit to the relationship. The turning point was a class taught by Lyle Gomes, the head of College of San Mateo’s school of photography. The inspiration from Gomes, combined with a pivotal, highly-publicized photo that Gino captured of a lightning strike in downtown San Mateo, gave him the confidence to launch his career as an independent photographer.

“Some people don’t care about getting the unique shot,” Gino says, elaborating on his photographic philosophy. “Capture the moment. Most of my best photos are about the moment.” 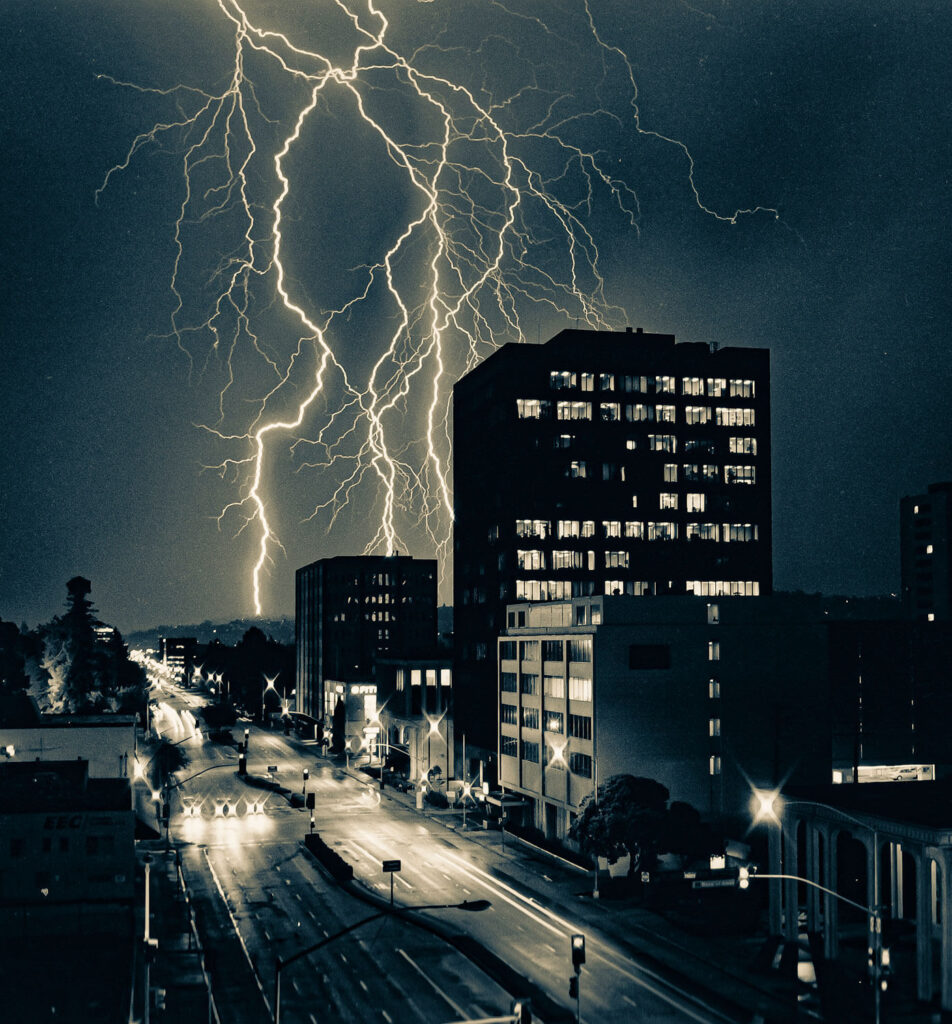 All exploits considered, Gino is perhaps best known for his work as a storm chaser photographer. His poetic shots of fearsome storms have appeared in a host of national publications and news broadcasts. He also photographed for the VORTEX-2 project in 2009 and 2010; at the time, it was the most comprehensive tornado data collection project in history.

During the documentary Tornado Alley, Gino can be seen in several scenes documenting storms. He was one of the few photographers allowed to venture into the evacuated Florida coastline area during Hurricane Irma in 2017.

His characteristic “by any means necessary” attitude is what put Gino on the map as a storm chaser. In 2004, he was assigned by San Francisco State University to collect some photos of storm chasers in the field for the university magazine. Given his lack of chasing experience, Gino was turned down by every storm chaser for a seat in their vehicles. So instead, he rented a car of his own and followed the chasers wherever they went.

“They said, ‘You are so stubborn,’” Gino chuckles. He promised the storm chasers he would give them his photos at the end of the trip for free. When they saw Gino’s work, they were immediately convinced that he had what it takes. “‘Nobody photographs like you,’ they told me. ‘You are unique.’” 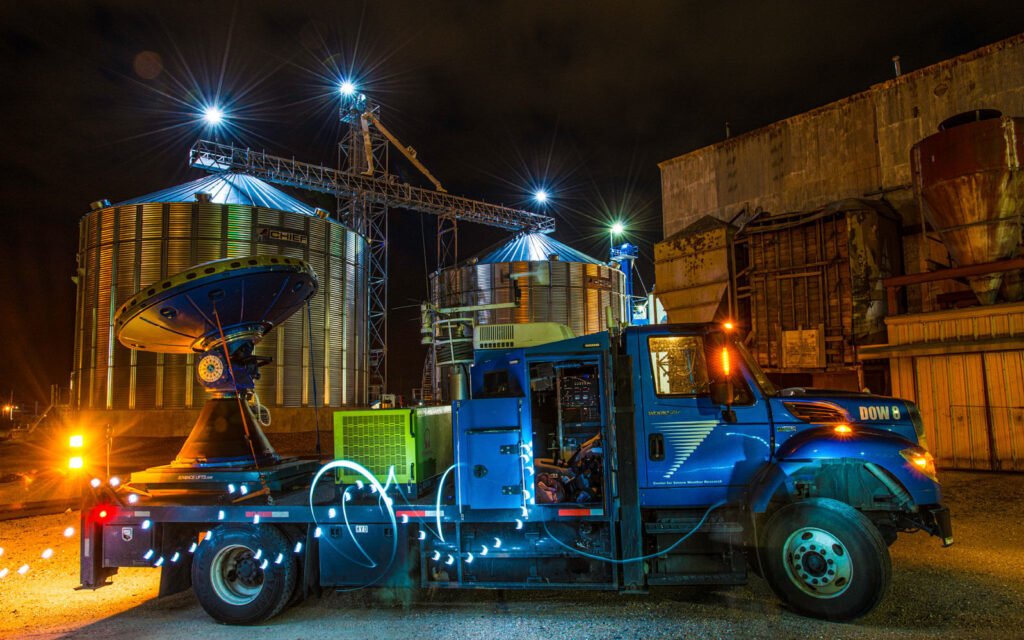 Since 2004, at the beginning of every U.S. tornado season, Gino awaits the call to his San Mateo home for storm chasers to assemble in the Great Plains for the first twister of the season. According to the National Severe Storms Laboratory website, about 1,200 tornadoes touch down in the U.S. each year. The largest, most destructive tornadoes typically form from isolated thunderstorms called supercells. Billowing, dense, imposing clouds blot out the sky, and the rotating mesocyclone of the storm can produce severe wind, baseball-sized hail and     occasional tornadoes.

“I don’t even think about it,” Gino says, of his mental preparation for tornado hunting. “If I have to go, I go.” He likens it to firefighters charging into a burning building: They have a job to do; no point in overthinking it.

“Sometimes you can’t go out even if you want to because the wind is so strong you can’t open the door,” Gino says. He holds one hand flat over the other, slightly quivering, to demonstrate the sensation of his car being lifted off the ground from the supercell winds. 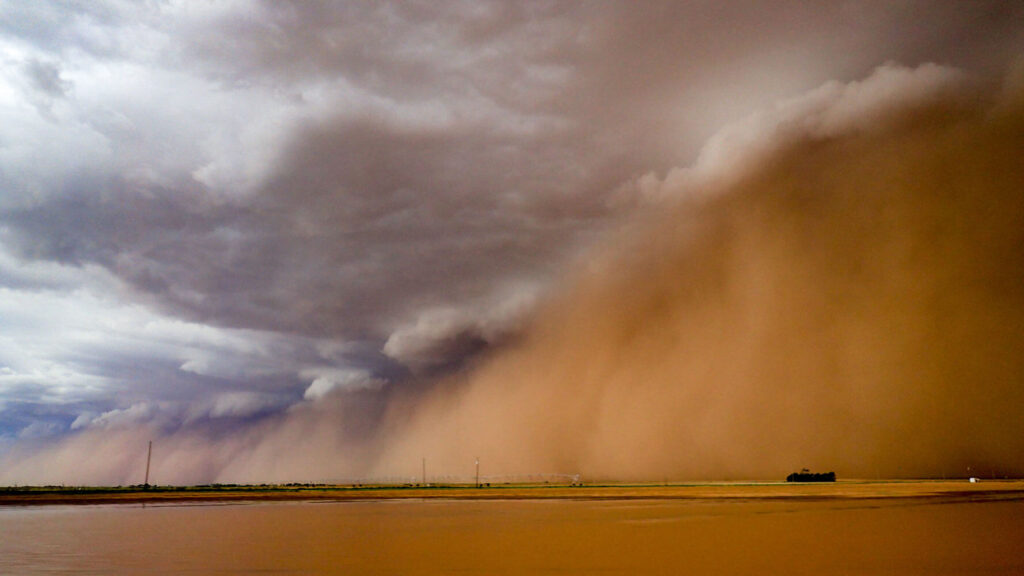 Once, while photographing in front of an impending supercell, Gino was told by the crew monitoring the radar that he had about a minute before hail began bombarding him and his equipment. Desperate to capture a unique perspective of the storm, Gino stayed outside adjusting his camera settings until he snapped the frame he wanted.

“I got the shot,” he recalls, but it came at the price of a nosebleed. “The same time I clicked, I got hit with a piece of hail.” Gino says that the crew usually wears helmets and bulletproof vests to protect themselves from the potentially lethal hail.

Storm chasers are usually scientists attempting to gather data in order to quantify the immediate danger of a storm to the general public. This proximate information also adds to the overall understanding of supercells, which informs future predictions. Aside from the beneficial data collection, Gino says that storm chasers are also in the position to save lives, as they encounter people and tell them to take shelter. 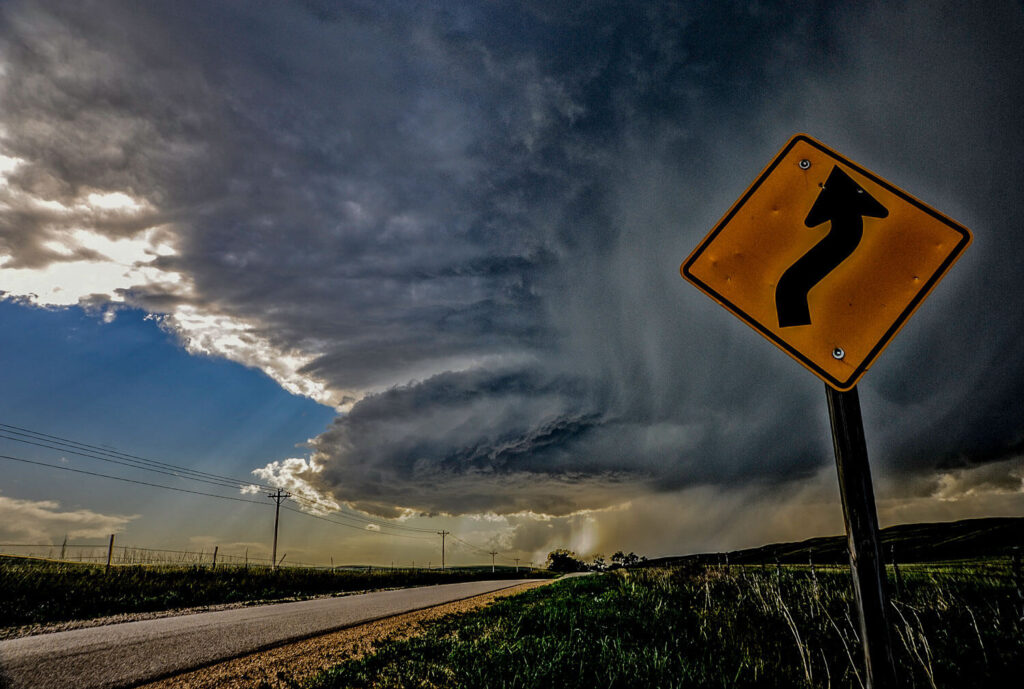 Gino has seen a tornado peel asphalt off a road like a cheese grater. He has seen a tornado toss a metal garbage dumpster around like a hammer-thrower. Many are fascinated by the cataclysmic power of tornadoes, but Gino sees the artistic, almost romantic qualities in the storms.

“I don’t care about tornadoes,” he says. “I care about the supercell—the magnificent formation of the clouds.”

Scrolling through Gino’s image library, the strange beauty of these storms is apparent. In one of Gino’s shots, a foreboding, jet-black cloud front creeps across the right side of the frame. Yet on the left: Tranquil, powder-blue sky. Gino says he is drawn to these spectacular displays of contrasting colors.

At this point, storm chasing sounds like the exhilarating experience portrayed in popular culture: A chance to throw caution to the wind—literally—and confront the full wrath of nature. But Gino is quick to point out that the job is far more monotonous than it seems.

“Try doing it for a few weeks,” he says, before describing the emotionally grueling day-to-day grind. Gino says that the majority of time is spent driving from location to location, including days when the team never even gets out of the car. He estimates that his group of chasers drove 5,000 miles during one 10-day stretch last season.

“You stop for everyone to go to the bathroom, that’s five minutes,” he says. For storm chasers, five minutes is a long time, considering how quickly and sporadically storms move and how short-lived some tornadoes can be. “We’ve lost tornadoes because of people going to the bathroom,” he laments. 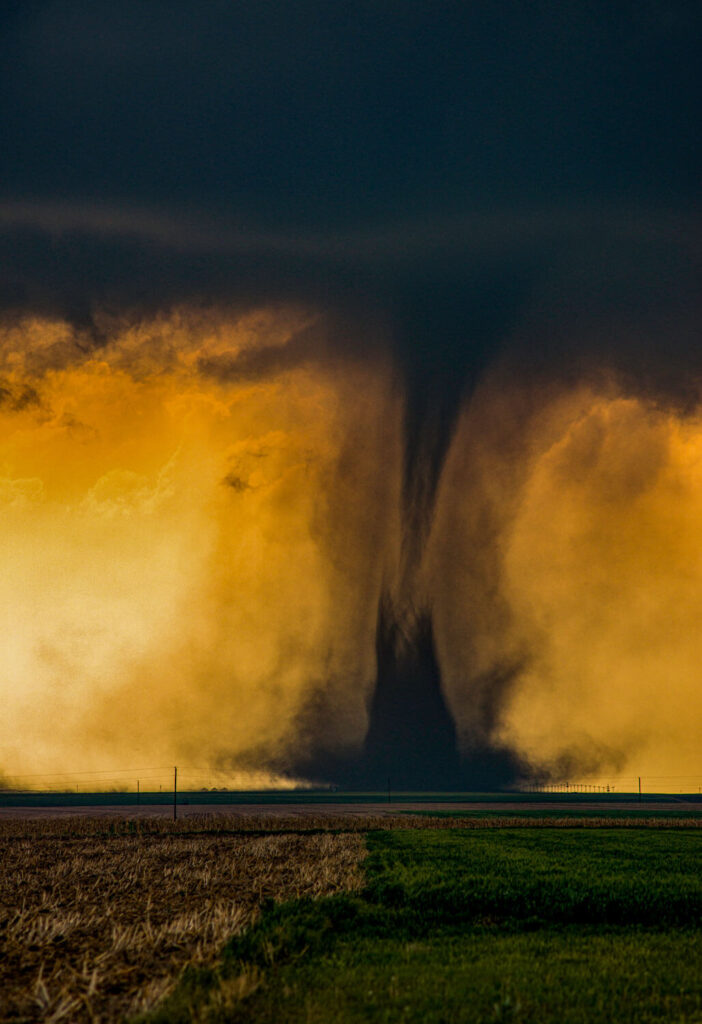 Last season, Gino considered stepping away from chasing for the first time. Many of his storm chasing contemporaries have struggled with their mental health as a result of the job’s extreme emotional highs and lows.

“When you come back home you are so damn tired,” he says. “You are exhausted. I saw people crying because they cannot do it anymore.”

Despite his ever-increasing collection of show-worthy photographs, Gino refuses to hang a single print in his house. The interior color palette ranges from cream to beige, including some of his paintings. He wants to avoid any preconceived ideas of what he should shoot. To Gino, hanging a photo would signify contentedness, which leads to complacency.

“I’m never satisfied with my photos,” Gino states. “I can do better all the time.”

As he continues to reflect, Gino flips through the diary he has kept since his naval service. “This is a power tool,” he says of his life logs. “It’s an umbrella opening the opposite way, catching all the energies.”

He never runs out of metaphors and turns another page.