Photos by Courtesy of Gary Belinksy 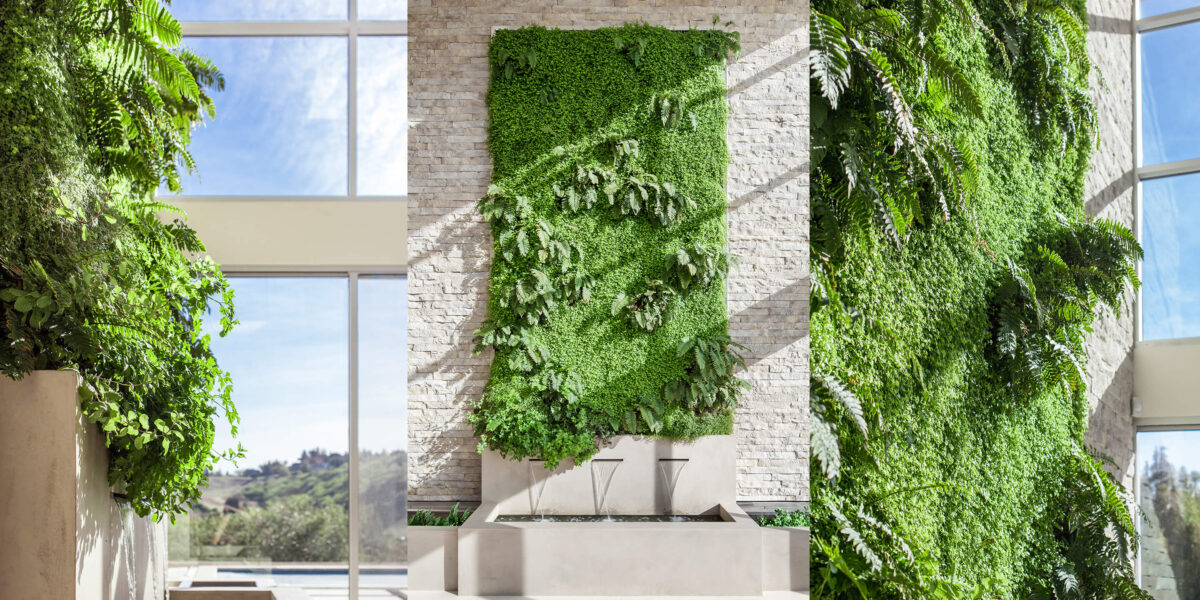 When the wind sweeps through this short and narrow tunnel, it transforms the embedded greenery on a western wall into undulating emerald waves.

There are several species of plants here—some with small green petals, others shaped as spades the color of plums—coalescing to create dimensional depth. Twin chutes of long, grassy brush stretch across the installation like mirroring sequences that pop out to the length of an arm’s reach. The whole piece is roughly the size of a traditional highway billboard but the only promotion here is for tranquility.

The wall of wild things is washed in darkness and light, with contrasting tones and textures. It’s enough natural splendor to pause reality; after all, this is an open foyer connecting Santa Cruz Avenue and the interior courtyard of a recently constructed mixed-use building in downtown Menlo Park. But such an effect is the power of a living wall.

Gracing homes, businesses and public art spaces across the Peninsula and Bay Area are dazzling walls made of vigorous plant life, capturing the unfailing allure of the outdoors. A local leader in vertical garden creation is San Francisco-based Habitat Horticulture, led by its founding principal and lead designer David Brenner.

David approaches each project with dedication—even after the installation is complete. He’s been known to wander the Bay Area to pop by a previously installed wall to see how things are growing. “We have a great maintenance team but it’s always good to learn from the installation,” he says, “and see how you can improve and what not to plant next time.”

On his next visit to Menlo Park, he has a new wall to assess. “That was a challenging spot,” he says of 506 Santa Cruz Avenue. “It was an indoor/outdoor setting and having these big grasses in there gave it a sense of movement.”

It’s essential that every project is positioned to soak up adequate sunlight, meaning that David and his team are sometimes called in when a building or home is still in the blueprint phase. David will then begin sketching an idea for the space, sometimes digitally on an iPad, but he also likes to keep his creativity challenged by occasionally using watercolors.

The sketches allow him to begin feeling a flow or movement for the piece while experimenting with options for his color palette. 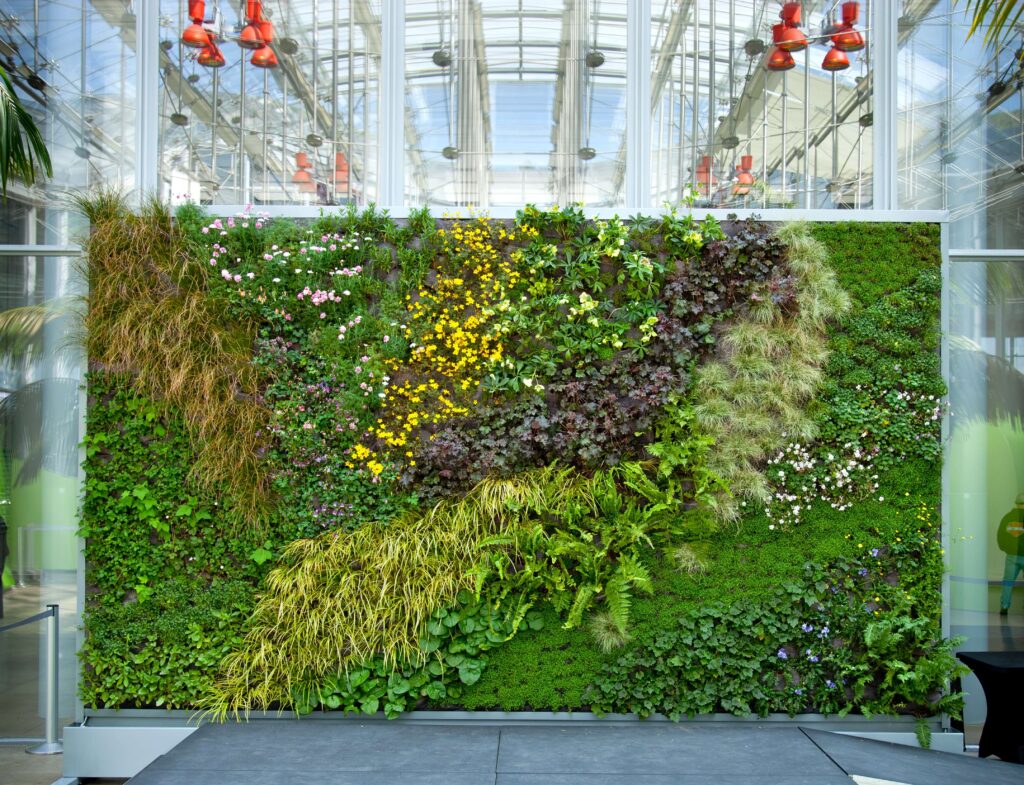 “I try to start with some plants I know I’ll use and then depending on what we can grow there, I’ll ask myself, ‘What can I convey with this piece?’” he explains about his creative process. “Should I make it dramatic, something that can stand as a piece of art on its own? Or more subdued, like that you’d find in nature?”

Often, a field trip is required for inspiration, such as the time the SFMOMA selected David to design a 150-foot-long, 25-foot-tall wall at the museum. To get ideas, David hiked up Mount Tamalpais to observe ferns and understory species. “Any excuse to get out into nature, I’ll take,” he grins.

SFMOMA requested that the project celebrate plants native to the area. David sourced 19,422 selections from 37 species. Once chosen, he designed a diagram called a plant palette that divides the wall space into sections using numbers to indicate where each species is sown. In essence, it’s a game of plant by numbers. 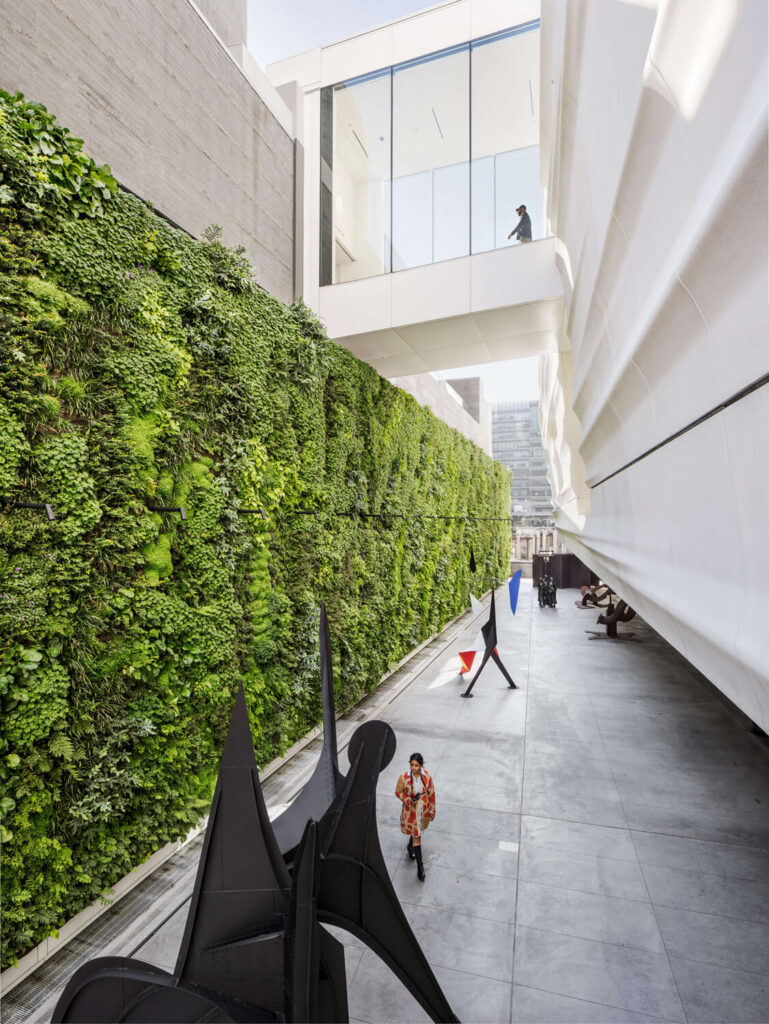 Behind the plants is an innovative wall composed of steel, polycarbonates and recycled plastic bottles refashioned into sheets of felt.

“This is something we have manufactured,” David says of the plastic-turned-felt covering. “We were able to create our own growing medium we call Growtex that’s made primarily from recycled material that doesn’t break down. It’s internal wicking material that moves the water extraordinarily well.”

(Habitat Horticulture often hatches innovative ideas for domestic gardening, such as their new line of miniature living wall systems they branded Gromeo that are two feet tall and arrive fully planted, ready to mount and enliven any work-from-home scenario.) 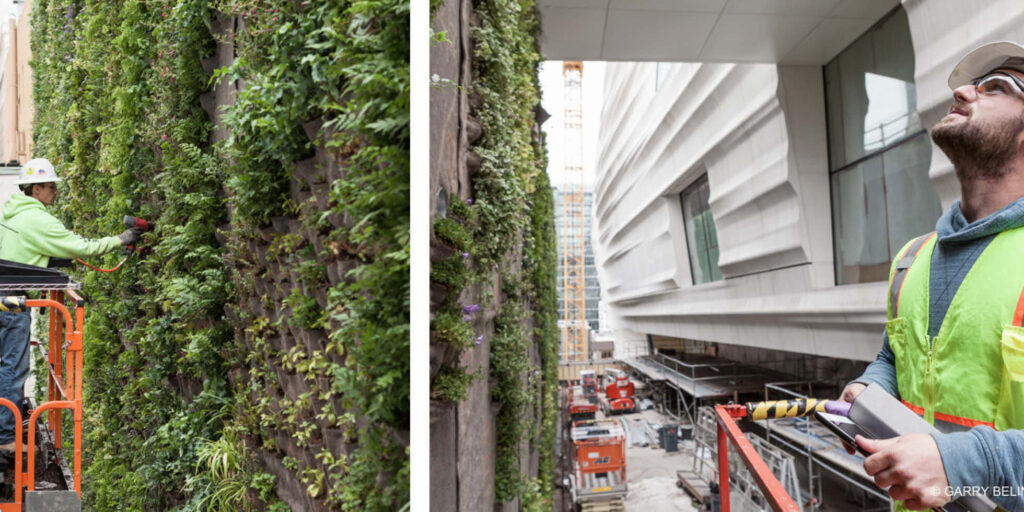 The living wall’s plants are tucked into small pockets where they’re watered through a concealed, internal irrigation system. At the base of the living wall is a draining system that collects the runoff for recycling. An internal system analyzes the pH levels in the water to determine exactly how much fertilizer to add.

The installation at SFMOMA is recognized as the largest living wall in the country and its success attracted further projects to David, including the 25-plant wall in Oakland at the Blue Shield of California Building. It’s the first living wall awarded an artistic designation under Oakland’s Public Art for Private Development municipal code. The miniature, multi-colored plant palette used for the project now hangs in David’s office, framed on his wall near a few Gromeos.

Outside of commercial projects, David and his team installed walls for several residences on the Peninsula including a luxurious interior wall with a fountain and ferns in a Los Alto home and a large exterior wall for an address in Atherton made of creeping figs, two species of ferns and Japanese sweet flag.

Beyond the visual appeal, homeowners and businesses recognize the psychological benefit offered by living walls—which is what initially drew David into the field as a teenager growing up in San Jose.

“My grandfather promised to take my Nona back to Italy every year, so I’d water their plants,” he says. “I knew at that time that there was something therapeutic about watering them and caring for something. That led to my interest in plants. When it came time for college, I decided I’d stick with this plant thing.” 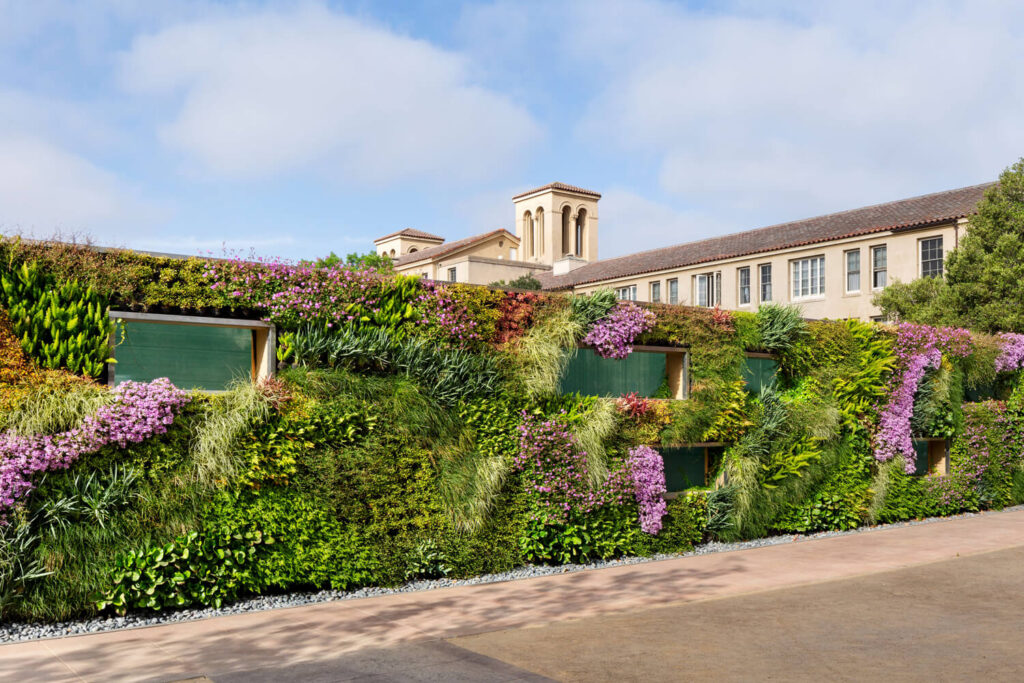 David focused on horticulture and psychology at Cal Poly, San Luis Obispo, melding the two through studies that explored the stress-reducing effects from plants and their ability to enhance self-esteem. Attention Restoration Theory, he noted, proposes that mental fatigue and concentration are improved with time spent in or admiring nature.

During an apprenticeship at Kew Gardens Tropical Nursery in London, David explored lithophytes and epiphytes, meaning plants that grow naturally on trees and rock surfaces or that grow from another plant. When he returned to Cal Poly, a botany professor offered him a greenhouse in the middle of campus that served as his living laboratory.

David graduated in 2008 and after a couple of years working at a nursery exchange and landscaping, he established Habitat Horticulture in 2010. His first commercial project was for New Resource Bank in San Francisco and his big break came when the California Academy of Sciences called upon him for help with a languishing living wall in its main hall. He decided to pay homage to the coast by using the native fern, California polypody, and variations of green, pinks, violets and whites.

Sometime later, David attended a talk at the museum given by Patrick Blanc, a French botanist considered the father of vertical gardens and living walls.

“Of course, one of the first things he notices is the living wall I created,” remembers David.

“He had really taken a liking to it because it felt like something you might find in nature. (It was mostly ferns, many native to California.) He has always been an inspiration—I wonder if my work might ever catch his eye again.”