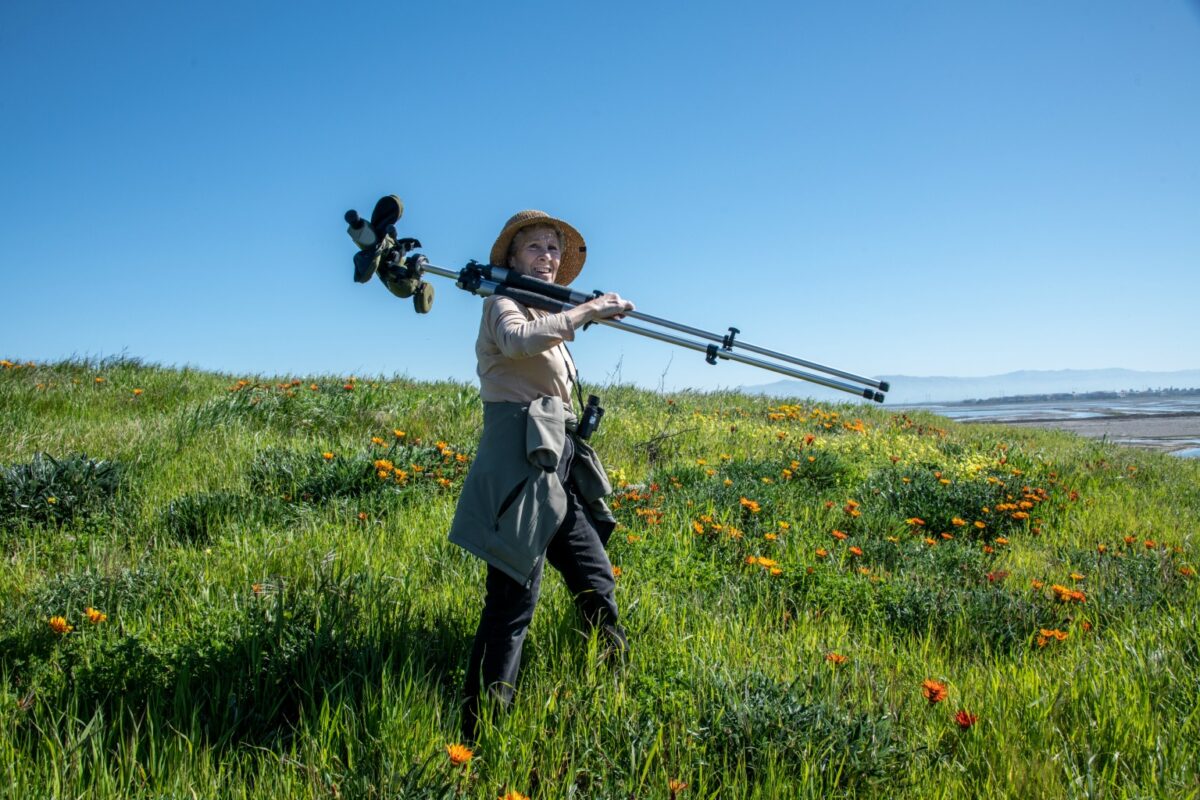 Birding, for all intents and purposes, is anything but for the birds.

The hobby may appear trivial—there’s little complication in leaving your home with the sole purpose of observing, identifying and appreciating the feathered fauna that surround us—yet listen a little deeper, follow the sonic clues and these chirps and tweets reveal the marvel hiding within plain view.

A Saturday morning at the Bedwell Bayfront Park in Menlo Park is a smorgasbord of outdoor activities: bicycling, dog walking, hiking, picnicking and remote-control aircraft flying (even though it’s officially been banned).

However, only one pastime has you inconspicuously perched in the brush, admiring the inverted hot pink kneecaps of a black-necked stilt as the sandpiper repeatedly bores its needle beak into mudflats probing for miniature crustaceans. It pokes its head up as a raft of migrating Northern Shovelers wade by, distinguished by their stark green eyeliner, suggesting that if David Bowie was a duck, he might have been a Shoveler.

Then a white-tailed kite swoops in. The small raptor, with wings that can arch perpendicularly like the opened doors of a Tesla Model X, is seen surveying an adjacent open field for lunch. The hawk rapidly beats its wings to suspend itself in air, validating its kite namesake. While hovering in place, it spots a small rodent and dives in. Nature isn’t always peaceful but there is a consistent sense of order.

“I love the fact that nature has it all figured out,” Chris MacIntosh says. “Everything has its place.”

Shielded under a sun hat with a scope on a tripod sometimes perched over her shoulder, Chris’ main avocation is nature. She’s passionate about introducing first-timers to the hobby of birding and as an at-large officer for the Sequoia Audubon Society based in Woodside, she’ll sometimes lead a beginner or refresher bird walk at Bedwell Bayfront Park. Two hours of birding whiz by as she points out the delicate features that distinguish species or helps you realize you’re frequently engulfed in a chorus of songbirds.

“You just start noticing. Now listen,” she says, gesturing towards a bush that so far has been neglected of any attention but is quickly transformed into an avian jukebox. Sweet chirps ensue. “That’s an American Robin. There are all of these birds that we’re not seeing but you’re hearing; you realize you’re surrounded.”

To go birding is to become untethered, almost absolved, of urban woes and stresses. It’s a meditative exercise of listening first, seeing second. It’s such a straightforward outing that the only equipment you need is a pair of binoculars or a scope, and even that’s not mandatory. If you start to notice birds, it can be the first domino to fall in a line that unveils the interconnected relationships of nature. Branching out from birds, you learn about the types of trees or brush where they perch, the tide schedules for shallow water dwellers, the seasonal shifts that bring in migrators and how local land development projects can create barriers that manipulate habitats.

The Peninsula offers an abundance of birding opportunities, thanks to the protected estuaries, sloughs and mountain open space preserves that provide a backdrop for the Pacific Flyway, a major north-south flyway for birds in migration that extends from Alaska to Patagonia. It’s a yearly back-and-forth procession occurring on either side of winter where avian species parade along the coast in search for food, habitats or a cold-weather escape.

It’s impossible to predict what rare or unique species could arrive any moment due to our position along the Flyway—such was the case last winter when an elusive Ross’s gull from the Arctic appeared at the Pillar Point Harbor parking lot near Half Moon Bay. A flurry of birders rushed to the coast to see this rarity (only the second spotting ever recorded in the state) and hundreds were able to admire the snowy gull for a few days. But nature’s darker sense of humor got the best of everyone when a pair of peregrine falcons killed the gull in front of a stunned crowd. It was a “Gotcha!” moment that even seasoned birders had difficulty processing.

Birders often tally a “life list” capturing the species they’ve encountered or continue to seek out. This mental trophy collection shows dedication and commitment but for Chris, identifying a new bird is less about the feat and more of a record for her memories.

“Oh, it’s pathetic—there aren’t even 400 birds on my list,” she admits. “But it’s not so much about building up my list. When I see a new bird, it’s a way of remembering a great day I had.”

Ornithology has embraced the ubiquity of smartphones with apps like iBird or The Sibley eGuide to Birds (adapted from the quintessential field guide by David Allen Sibley) to allow birders to instantly identify an uncertain species. Birders flock online to share rare sightings, schedule group outings and use one another as resources.

Since 1998, Sequoia Audubon Society has maintained an online group forum called Peninsula Birding, where nearly 900 members trade weekly field notes and keep each other informed. In March, a member wrote how the spotting of an endangered green-tailed towhee in Moss Beach drew binocular-wielding towhee fans to the neighborhood, startling some non-birding residents who were perplexed by the strangers peeping around their houses.

“I was just talking to the neighbor,” the post says. “She was still happy to have birders in the neighborhood and does not mind folks pointing optics at her home. I don’t know which neighbors were troubled by all the optics, but I want to clarify that some are fine with our neighborhood’s 15 minutes of fame in the bird world.”

The Sequoia Audubon Society has about 350 members and an active calendar of bird walks scheduled on the Peninsula from the coast to the mountains to the bay. Chris worked in administration for Stanford and now her job is to help others begin to listen. En route to the parking lot, after a couple of hours on the trails, she starts to summarize the simple pleasures of birding.

“It’s just the sheer—,” she’s cut off by a nearby squawking gull that hijacks our attention.

“Yes, we hear you too, seagull,” she says in response. “Who isn’t going to be amazed when a flock flies by you? It’s hard to be stressed when you’re watching birds go about their business.”