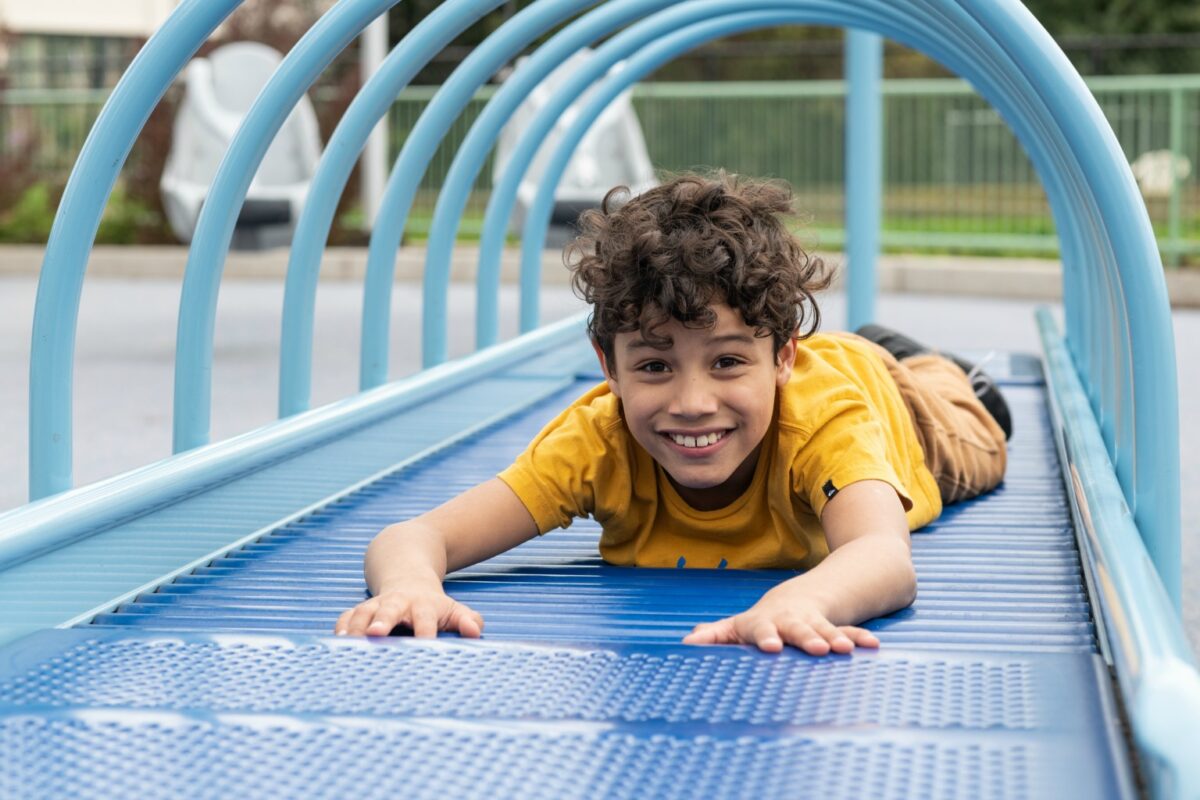 The sapphire blue structure that stretches over Adobe Creek in Palo Alto leading into Magical Bridge Playground truly bridges the gap between people of all backgrounds—regardless of ability or disability. Situated on a tract of land along the eastern edge of Mitchell Park, this playground is for everybody and for every body.

It features wide swings and slides, a rubber ground for easy traversing and calming retreat spaces if a respite is needed. There’s a continuous choir of hoots and laughter sometimes broken up by the playground’s motion-activated 24-string laser harp. And every single structure, bench or play activity is decked out in cheery Dr. Seussian colors—whether it’s the Kindness Corners, Sensory Spin Zones or the Splendid Slide Mound.

It’d be shortsighted to assume that this is a special needs park—after all, as the park’s creators like to point out, there’s nothing special about needing a place to play.The Magical Bridge Playground is universally designed to be accessible to visitors of all ages, sizes and abilities.

Olenka Villarreal didn’t set out to reinvent playgrounds when she began envisioning Magical Bridge Playground a decade ago. The Palo Alto mother of two had simply noticed a shortcoming within her community after her youngest daughter, Ava, was born in 2003 with a disability.

“Even to this day, we don’t have a diagnosis but the common thread from all the doctors was to give her movement, to take her to playgrounds,” Olenka says. “We were going to a gym in Cupertino so that Ava could swing and it had a long waitlist. At that moment, I realized it’s not just Ava; a lot of people are paying crazy amounts of money to come swing. What about the people who can’t afford to pay $120? At that moment it occurred to me that the way public parks are created was not for everyone.”

At the time, Palo Alto had 34 parks but none were 100% accessible to every member of the community. Within Mitchell Park, the Pine Grove playground is fully compliant with ADA regulations, but it’s still not welcoming to everyone. Tanbark is not conducive for a wheelchair and the cramped play structure could be too frenetic for an autistic child. Perhaps inspired by the culture of Silicon Valley, Olenka was determined to disrupt the concept of the American playground.

Olenka met with city officials who encouraged her to envision a playground that would meet the needs of everyone. She started small, searching for inspirational examples around the world, but she quickly discovered no signs of precedence. Olenka began hosting weekly meetings at her house with friends and volunteers inspired by her quest (“We went through my husband’s quality wines,” Olenka jokes.) and they realized how open-access parks were relegated as after-thoughts in playground construction catalogs. “We were astounded to see that every brochure, even to this day, will have themes like ‘nautical’ or ‘imaginary’ and at the back is the ‘inclusive’ theme,” she says. “It’s still an option to make playgrounds inclusive.”

The inaugural Magical Bridge Playground opened in April 2015. Olenka’s eldest daughter Emma coined the name to illustrate how the playground bridged the gap between people from different backgrounds. It took years of fundraising—$4 million total—to bring the park to fruition.

Leland Levy, former mayor of Palo Alto, along with his wife, Judy Huey, supported part of the construction of the two-story community treehouse and stage. Designed by Barbara Butler, an innovator of artistic backyard designs, the structure is a magnified dollhouse and centerpiece of the playground. Tiny details delight like a wooden iPhone 4 (a testament to the playground’s many years of service) on a table inside the house and a faux box office is outside on the bottom right.

There’s programming twice a month available at the treehouse with music or puppet shows on stage and hands-on activities such as learning to write in Braille and STEM-centric lessons for all ages and abilities. As was the case last summer, sensory-friendly concerts will be offered every Friday from 6PM to 7:30PM starting Memorial Day Weekend and lasting through Labor Day.

The volunteer team worked together for seven years and following the completion of the Palo Alto playground, Olenka collaborated with Jill Asher to establish the Magical Bridge Foundation in 2016 to continue promoting all-inclusive playgrounds. The non-profit has received messages from as far away as Taipei with inquiries and questions about developing similar parks.

The foundation currently has four new parks underway with projects planned in Redwood City, Mountain View, Sunnyvale and Morgan Hill. Donations have been coming in from a wide range of sources: Santa Clara County allotted $10 million in funding to create accessible playgrounds, the Jay Paul Company provided an integral donation of $1 million for the Redwood City location and a Loyola School elementary student donated his $50 prize won from an essay contest.

In a white paper published last year, the foundation documented that the park receives up to 20,000 visitors a month. Olenka says this research strongly suggests that there’s an urgent need for public places like a playground that can meet the needs of the whole family. Looking towards the future when communities will embrace an increase in high-density housing, she compares a playground as an alternative to a town square.

“Today, there are so many ways people find themselves disconnected,” she says. “When you come into a playground, it doesn’t matter what your income is or who you voted for. We’re all here for the benefit of exercise and play with your kids.” The success of the Magical Bridge Playground earned the foundation an invitation to the World Economic Forum Annual Meeting in Davos, Switzerland, earlier this year. One of the major themes at the forum was bolstering inclusion for the one billion people in the world living with a disability. Magical Bridge’s exhibit demonstrated how the playground is an opportunity that can be embraced by all.

“Magical Bridge started with Ava but I realized it was certainly much bigger than Ava. I wanted to present a playground that was meant for everybody,” Olenka says. “That’s why we pivoted the message to be a new kind of playground, a community playground. One that meets the needs of every person.”