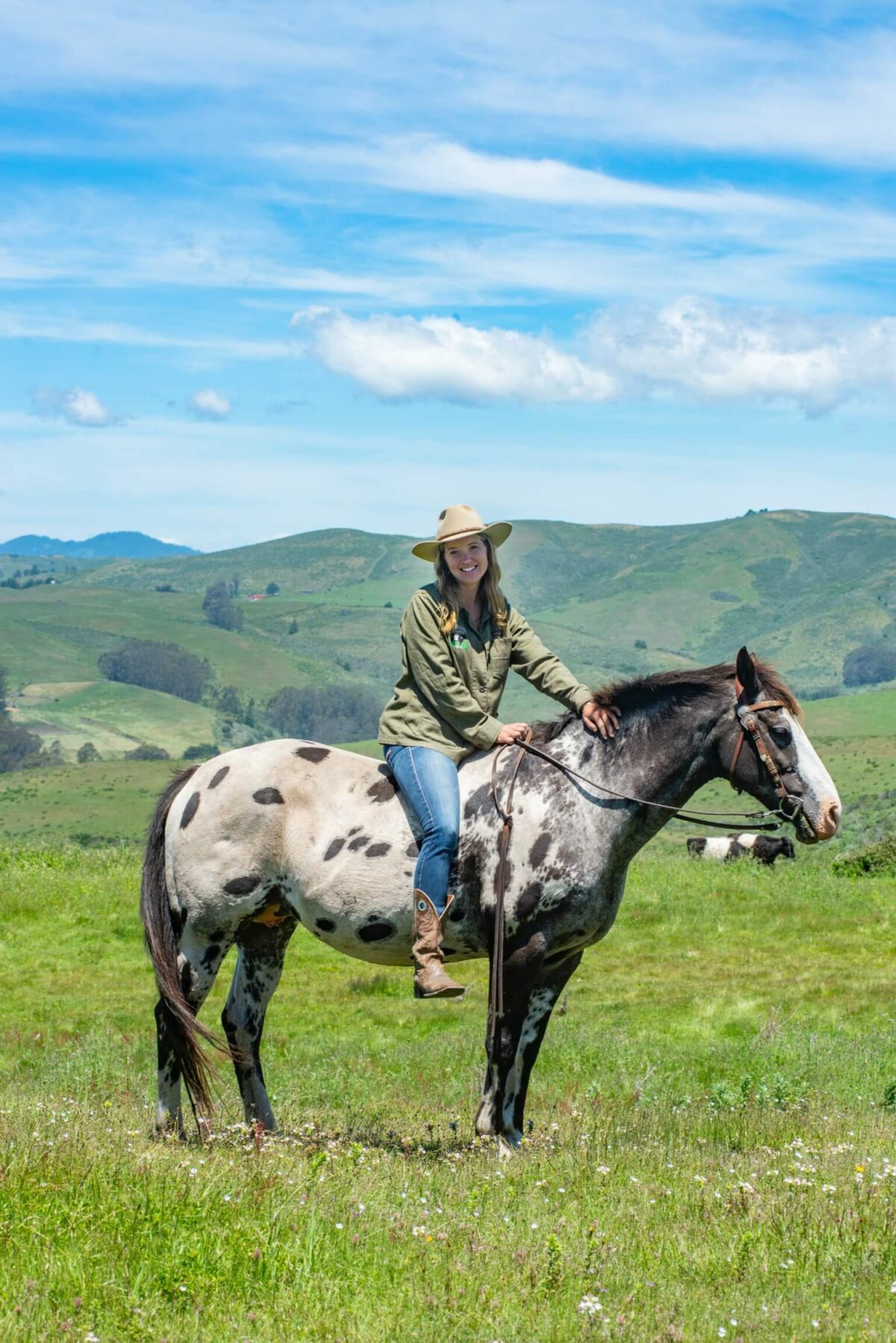 With her signature cowboy hat over long, blonde hair, boots and jeans, Doniga Markegard resembles every part of the modern-day rancher. Originally from Washington State, Doniga grew up immersed in nature, heavily influenced by leading wildlife trackers, naturalists and Native spiritual
elders. Versed in everything from mountain lion tracking to interpreting the language of birds, Doniga now channels her life experiences into a singular mission—leading the charge in regenerative agriculture and ranching on the Peninsula.

Doniga first moved to the area in 2000 to work for the Riekes Center Nature Department’s immersion program based in Menlo Park. During her summers, she contributed to other research projects, including tracking the re-introductory efforts of the wolf in the Frank Church—River of No Return Wilderness area in Idaho. It was there that she witnessed a transformative ecological phenomenon with her own eyes.

“I remember following a wolf first-hand into a rendezvous site where a bull elk had been taken down,” Doniga says. “The elk herd had moved on, but the grasses were vibrant. You could smell the elk. You could see their saliva on the grasses.”

This, Doniga realized, was a prime example of a trophic cascade, where life becomes more abundant in the disruptive presence of an alpha predator, often resulting in positive changes in the ecosystem structure and the flow of nutrients from soils to plants.

Doniga learned that the same benefits to the land resulting from predator and prey interaction can be replicated using the grazing of cattle herds to simulate the large herds of elk and antelope which once roamed California’s grasslands. “Mimicking natural systems through regenerative agriculture practices requires stewardship—people connected with nature and how the ecosystem functions,” Doniga says. “Biodiversity above the ground leads to biodiversity below the ground in the soil, which produces healthier, more abundant food for animals and people.”

Doniga and her husband Erik Markegard, a sixth-generation local cattle rancher, started Markegard Ranch with regenerative agriculture methods at the forefront—which include healthy soil, minimal tillage and keeping the soil covered with diverse living plants. With the help of their four children and ranch hand Sue Hall, Doniga and Erik’s Markegard Family Grass-Fed Ranch raises grass-fed beef, grass-fed lamb, pastured pork and chicken on over 10,000 acres on six ranches along the coast of San Mateo, Marin and Sonoma counties. Markegard Ranch is free of pesticides and chemical fertilizer, and the cattle and sheep are not grain- fed or given synthetic hormones or antibiotics or put in feedlots.

The days can be long and hard as a rancher, but you wouldn’t know it from visiting the lush, green property that even shines on a rainy day. On a recent drizzly morning, Doniga had already milked the cow, fed the chickens and pigs and moved all the livestock to a fresh pasture by 8AM. “I don’t shy away from hard work,” she says. In 2005, Doniga and Erik started in Half Moon Bay with 30 customers. Today, Markegard Ranch reaches thousands through farmers markets and their direct-to-consumer Community Supported Agriculture (CSA) program, where members can pre-order online and pick up at a designated location convenient to them.

Both Peninsula Open Space Trust and Midpeninsula Regional Open Space are known for their protected lands and parks. Each has also identified the issue of the decrease of farmland in the area and the positive role farms with conservation methods can have on the region. They lease a portion of their land to select farmers and ranchers and both lease land to the Markegards.

“If we take our place as tenders of the wild versus dominate nature, solutions will emerge,” Doniga says. “We can keep carbon in the soil where it belongs and actually sink more carbon every year through regenerative practices, rather than releasing it into the atmosphere.”

Point Blue Conservation Science conducts studies on the impact on soil carbon storage capacity. Chelsea J. Carey, PhD, a senior soil ecologist with Point Blue, noted that between 2015 and 2018, during the tail end of California’s drought, Cloverdale Ranch in Pescadero, one of the Markegard Ranches leased from Peninsula Open Space Trust, gained an impressive amount of soil carbon.

“If just 10 percent of California’s 54 million acres of rangeland were to sequester soil carbon at similar rates, we could offset greenhouse gas emissions from over two million passenger vehicles driven for one year,” Dr. Carey says, adding that this could significantly help the state to achieve its goal of reducing greenhouse gas emissions by at least 20 million metric tons by 2030.

Doniga points to another noteworthy benefit. In addition to sequestering carbon, cattle-grazed grasslands reduce dry vegetation—cutting down on the fuel that feeds wildfires. “Even when the grass is brown, if you look closely, you can see green at the soil from perennial plants. We see an increase in the native perennial bunch grasses through our grazing practices,” Doniga explains.

Doniga’s efforts stretch beyond the role of a seven-days-a-week rancher. She educates audiences at 20 speaking appearances and workshops a year, recently wrote a memoir (Dawn Again) and her home ranch in San Gregorio invites families to visit on a Ranch Day five times a year. “Families come out to visit the animals. It’s a chance for people to experience what ranch life is like and learn about the benefits of regenerative stewardship,” she says. The next family visit day is on July 21. This November, Markegard Ranch will also host a five-course open-air feast on one very long table alongside Outstanding in the Field, an organization working to connect diners with the origins of their food.

Strengthening this vital partnership is critical to Doniga’s mission—as she points out, urban regions support rural businesses and rural communities provide food and stewardship of the land. “I think it’s important to link urban and rural areas because it’s a key intersection to work toward solutions,” she says. “Silicon Valley and the coast are great examples; the best way to work with farmers is to vote with your dollar and source fresh, healthy food from local, regenerative farms and ranches.”

Doniga is driven to leave a lasting legacy. “I’ve always wanted to make a big impact,” she says. “We need to engage the public in order for this movement to really work. I tell our story to show an example of what one family can do.”

connect with the land