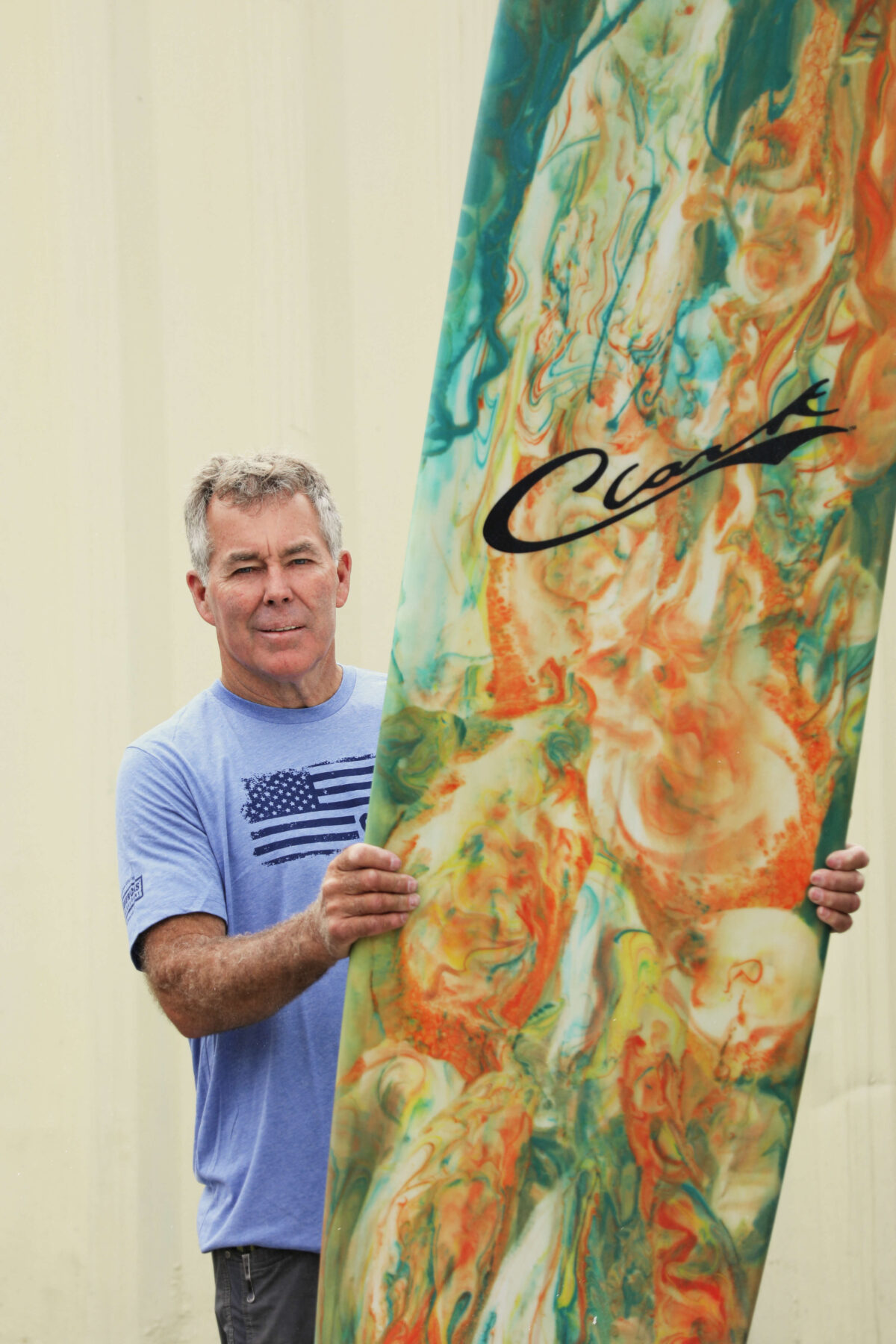 It was a few minutes after 5PM on October 17, 1989, when Jeff Clark, the Half Moon Bay local who’s often found in the water, had a hunch that led him to surf his first wave on the pavement.

He was rolling up power cords following a carpentry job in Atherton when his instincts kicked in, as they do when he’s straddling his surfboard waiting for his ride behind the wave breaks.

“My feet are sensors, like the rail of a surfboard,” Jeff explains. “I feel it coming and I say to my friend Mark: ‘Earthquake!’ His car started jumping side to side, literally doing the moonwalk down the street. We’re standing on the street with waves moving us.”

After the seismic shift, Jeff and Mark raced over to the 40-foot brick wall they had recently completed expecting the worst, but it was fully intact. Not-so-lucky brick gate pillars and fences lay splattered across the street. The Bay Area emerged from the Loma Prieta earthquake as Jeff, the big wave rider, dashed west on Highway 92 back to home, back to the ocean.

A lifetime in the water bred an intuition with the natural world that’s provided Jeff with a holistic perspective. It exudes from his casual demeanor, softened by the ocean-blue eyes he reveals after removing his Oakley shades.

Seated outside one of his two surf shops in Half Moon Bay during a recent hazy afternoon, Jeff produces a half-eaten stick of beef jerky from his pocket and peels the plastic back. He was already in the water that morning and after checking the weather report (by analyzing and peering into the ocean), he’s considering a few more hours before suppertime.

Jeff symbolically exists within the fray between the ocean and the land but he’s the first to tell you that life is not some beach.

“I am extremely open to insight through impression and being in tune with one’s presence and body. We know what’s going on all around us but we just don’t have conscious access to that power. The more you work on the other, the more available it becomes,” he says, before turning his attention to the sea.

“There are times out at Mavericks when I’ve been in situations and I can’t tell you why, but I just start paddling. Then 30 seconds later, when I’m on the wave, that’s when I can tell you why. There are things that if you open up to the possibility of intention or foreseeing, it’s there.”

It is perhaps similar to how there are certain people who become so entwined with their geographical areas that their presence is constantly present, like a fog horn hidden behind the blinding August brume.

Jeff is eternally linked to Mavericks, the world-famous surfing spot outside Pillar Point Harbor in Half Moon Bay that he’s credited with establishing. However, he’s quick to shift credit of its discovery to his childhood Little League coach Walt von Hauffe, who would take Jeff and his teammates out to the Point to ride small waves. If Walt introduced Jeff to Mavericks, then it was Jeff who shared the massive wave breaks with the masses.

Jeff is the oldest of four, born to parents who met at a church picnic at the beach in Half Moon Bay. His father and grandfather are carpenters (his grandfather was the president of the carpenter’s union in Redwood City) and Jeff continues the craftsman tradition, designing surf equipment like a specialized life jacket for surviving big wave blowouts and cutting-edge prototypes for fins and boards. In the past, he was a union carpenter by week and would shape boards on the weekends.

Jeff’s inaugural run on Mavericks is now the stuff of local lore: In 1975, when he was 17 and about to graduate from Half Moon Bay High School, Jeff paddled out to Mavericks along with a friend who hung back, famously telling Jeff he would, “Call the Coast Guard and tell them where I last saw you” if disaster struck.

Jeff surfed, returned to shore and would ride Mavericks by himself for the next 15 years before surfers worldwide caught wind and began pilgrimages to Half Moon Bay for their chance at the breaks.

Mavericks is legendary for having the largest waves in California, due in part to unique underwater rock formations and ideal weather conditions. During the winter season, after a strong storm in the northern Pacific Ocean produces a reckonable force of energy, waves at Mavericks can tower up to 60 feet.

“You don’t go against it—you ask, ‘How can I play with this dragon?’” Jeff expounds and points to a nearby telephone pole for height reference. “It’s unreal; you take all of your knowledge and training and then test it in that one moment. You’re never more alive or in the moment than when you hit your feet on a giant wave.”

Jeff organized a big wave, invitation-only contest from 1999 to 2016 called Titans of Mavericks. Competitors from Australia, Brazil, South Africa, Santa Cruz and beyond would race to Half Moon Bay each winter as soon as Jeff signaled the 48-hour heads-up that the waves were reaching ideal conditions. The last event was held in February 2016 after the World Surf League took over but Jeff has every intention of returning by himself later this year when the winter winds return.

The image of Jeff surfing Mavericks is immortalized on a mural outside Cunha’s Country Store in downtown Half Moon Bay. The big wave appears throughout the community; turn right onto Princeton Avenue en route to the Point and even the architecture of a newly constructed apartment resembles a barreling wave. Such an inundation of symbology is not lost on its pioneer.

“Now it’s a cliché thing to call your business ‘Mavericks,’” Jeff says of his hometown. “Everybody wants to call themselves ‘Mavericks Beer.’ It’s just funny to watch people jump on the bandwagon and have Mavericks be their call tag.”

He cracks a smile, flashing great white teeth. “I should get 10 cents for each use,” Jeff says in jest. 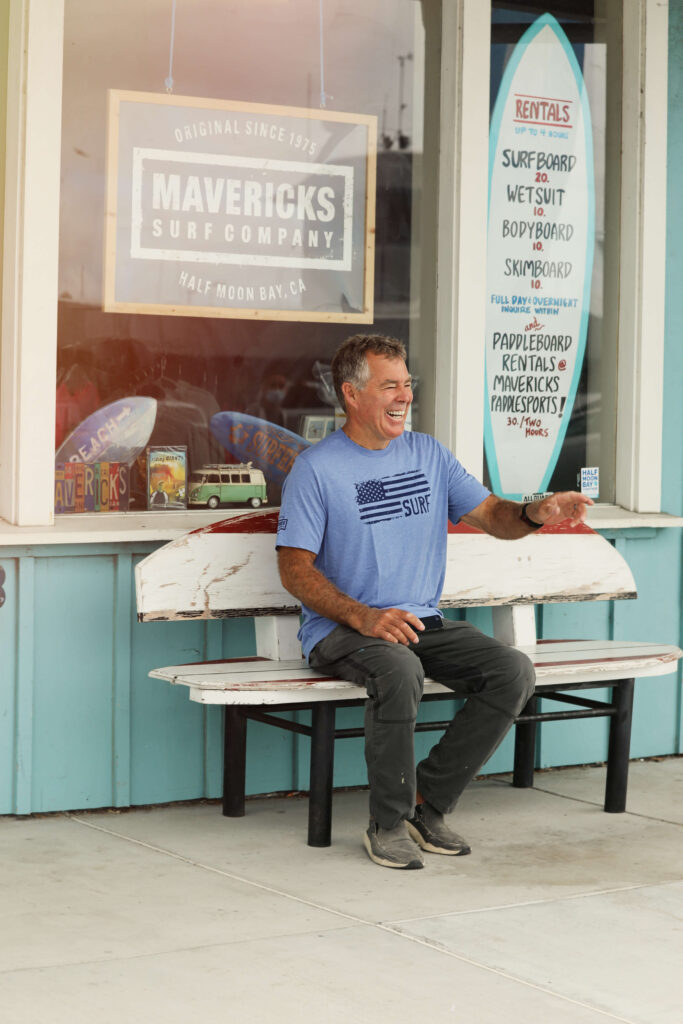 At age 63, Jeff sets the bell curve for what a sexagenarian can physically accomplish and endure. Scroll through his Instagram and you’ll find clips of him enjoying his latest passion: windfoiling, similar to windsurfing but using a surfboard with a hydrofoil extending beneath the board that causes it to hover over the water’s surface. It’s the latest in a long lineage of surface water sports and Jeff has spent the last few years mastering it.

“First there was surfing then windsurfing then kitesurfing, kite foiling and then stand-up paddleboarding came along. Now people started putting foils on surfboards to try to ride waves,” he muses. “When you’re using the wind, you’re independent of the water. A lifetime in the water has helped me to know where that energy is. It’s learned.”

Back at the surf shop, a young customer strolls in searching for specialized T-nuts used in a foilboard. The patron asks if Jeff has been out on his board recently. It’s small talk but there’s nothing short when talking Mavericks.

“I went out to Rio Vista yesterday—have you done the wing thing yet? The small wings…” Jeff’s voice dissolves as the two disappear into the store.

In the lot behind the shop, the white masts of a Laser sailing dinghy beat endlessly against the wind while the bay’s fog horn blasts from a distance. It’s the heartbeat of Half Moon Bay, repeating every eight seconds, and the bellowed blow, like a royal fanfare trumpet, accompanies Jeff throughout the motions of his day. 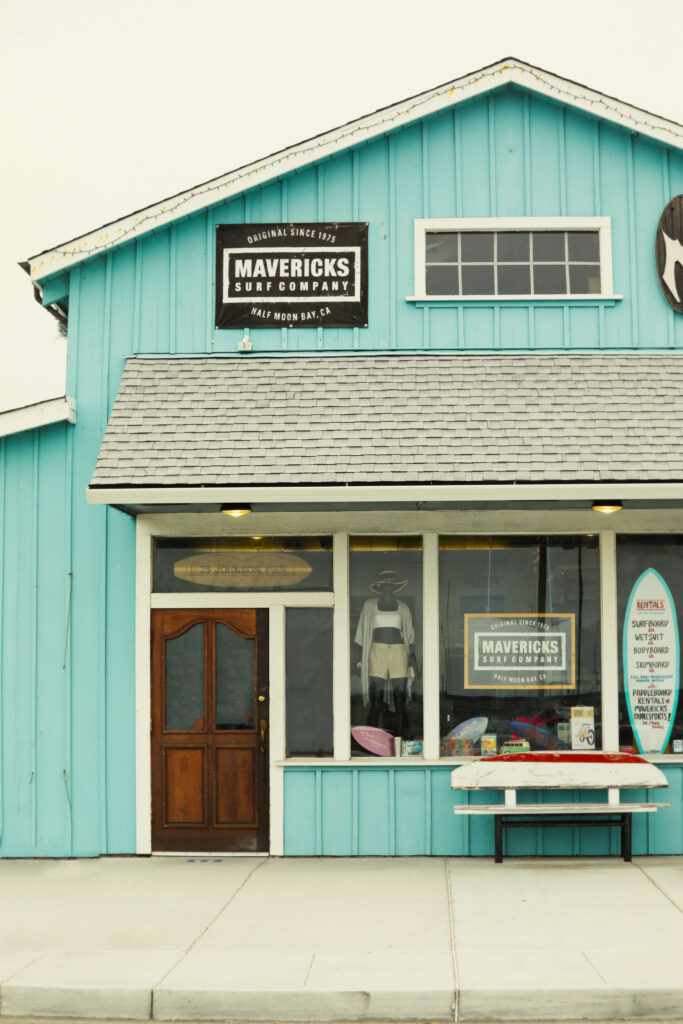