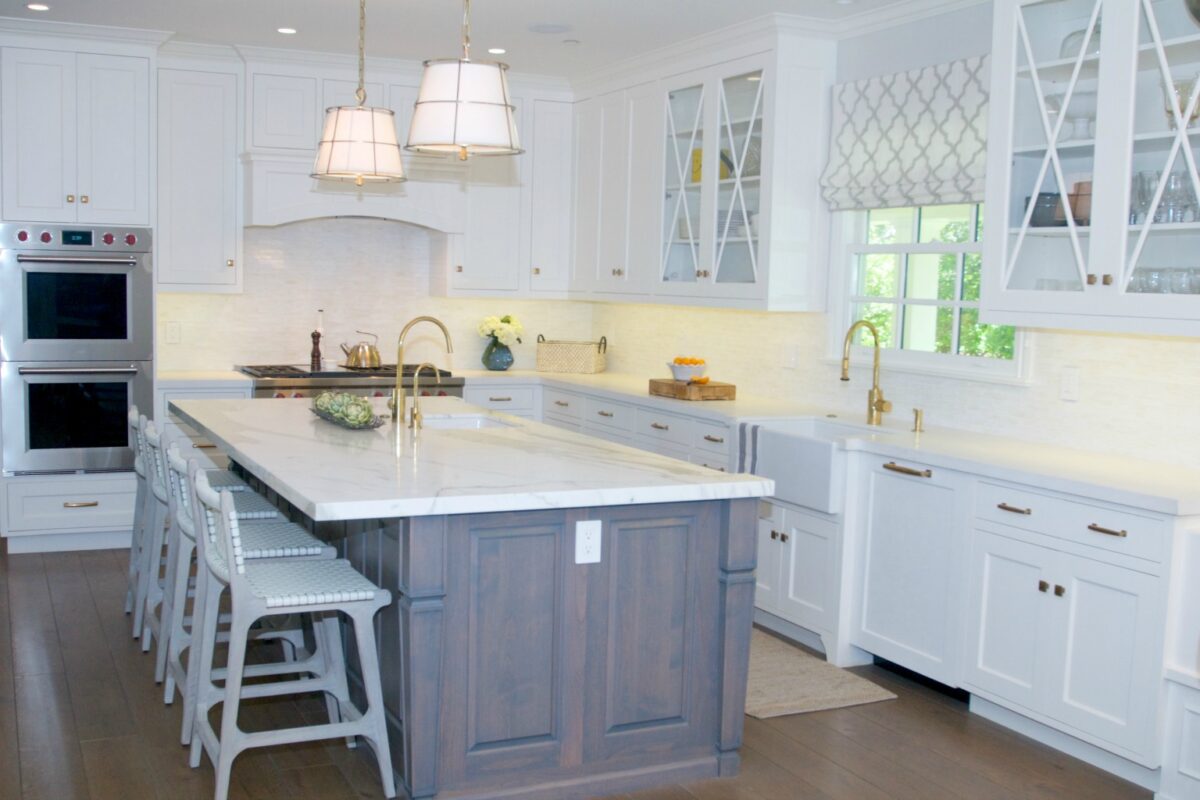 Kim Palmer had a calling for design. About 20 years ago, she got a phone call asking if she would do a room for the Dickens House Showcase, a long-established fundraiser for St. Matthew’s Episcopal Day School in San Mateo. The annual effort brought together designers to transform one single house, usually in Hillsborough or Burlingame, which was then displayed to the public. “I wasn’t a decorator at that time, but somebody had just seen my house and liked my design aesthetic,” she recalls. “And that just started my career.”

Stemming from that first room in the Dickens House, Kim began to get more calls. Soon, she had a steady flow of clients and has been working by word-of-mouth referrals ever since. And her own home in San Mateo still reflects her approach to design. Given that her home is more than 100 years old, with all its original molding, traditional style plays a strong role—but Kim also likes to bring in a contemporary edge: “The big word out there in design is ‘transitional’ because you don’t want to get stuck in one genre. If you can go either way, and it can be a little bit of both, it’ll last a lot longer. I like to use contemporary materials but in a more traditional setting.”

After moving into her San Mateo house in 1999, Kim undertook a major remodel in 2003. That’s a while ago now in design years, but by making subtle shifts along the way, her home remains a source of timeless pleasure. “Not everyone can afford to change out houses every 10 to 15 years—not only the expense of it, but also the hassle of it,” she says. “Traditional will be with us forever. If you can make it an interesting traditional, you can transcend the trends.”

As an example, Kim points to her living room, originally designed in 2003, capturing both traditional and contemporary elements. Although the sofa dates back to 1999, it has clean, contemporary lines—and it’s not going anywhere. As Kim says, “I’ve had it forever but still love it to this day.” Other established pieces include Chinese foo dog lamps and antique stools by the fireplace, along with a cocktail ottoman. However, a few years back, Kim started switching other things up. Out went the piano and a couple of basic chairs, and she brought in more contemporary wingback chairs. The antique couch pillows went away, and new ones were introduced—more subtle for the already colorful yellow sofa and “with a little pop” for the toned-down wingback chairs. For the mantle, Kim moved out more traditional pieces and introduced a contemporary starburst mirror and chinoiserie vases. Kim also pulled over two wingback chairs to create a little side vignette, accented by another new contemporary piece, a Bunny Williams table.

“You don’t have to redo an entire room. I really think by just changing out a few things you can really change the overall feel of it,” she emphasizes. “So many people think they have to start fresh. Little things can make a difference, especially accessories, light fixtures, pillows and those sorts of things.”

Kim’s breakfast room provides more examples of mixing traditional and contemporary. She went with upholstered chairs because they’re “just more comfortable than wood chairs.” The focal point of the room is an antique—a Portuguese refectory table, with widely-scrolled legs, likely previously at home in a church. Although Kim acknowledges that she isn’t using antiques as much as she did in the past, she says, “I do like to see an antique in a room. It tends to give a room some depth and history.” In contrast, the room’s light fixture has simple, clean lines, creating that transitional mix that keeps a look timeless.

Many of Kim’s clients live in Hillsborough and tend toward the traditional, although she does get the occasional contemporary emphasis. One such client moved here from Southern California, and Kim describes her style as less formal and more fun. The kitchen features Calcutta marble and woven bar stools from Made Goods, along with brass fixtures and faucets to add a pop of interest. For the powder room, Kim went with a traditional-style pedestal sink with no cabinetry, just open shelving. That’s intentional. She left it to the Schumacher wallpaper to really light up the room. In the master bath, Kim used a bluish-gray glass tile for the wainscoting: “That’s another great example of using a more contemporary material in a traditional way.”

And it’s that approach that makes traditional transitional.