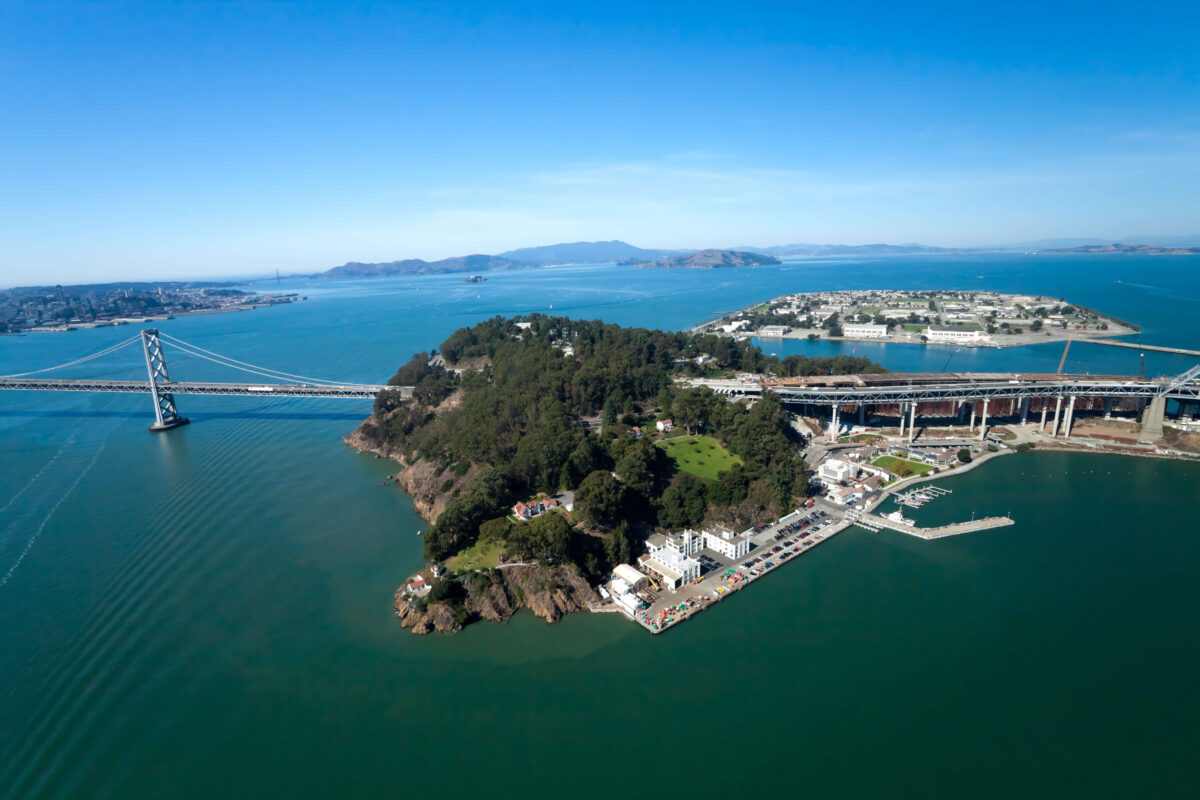 Treasure Island, sequestered between San Francisco and Oakland with gorgeous views to accompany urban exploration, is too often forsaken. Much like a fly-over state, it’s reduced to drive-over status, most commonly visited by way of a quick turnaround for drivers who miss their exit.

Such a reputation is not lost on its inhabitants and business owners. “Everybody is like, Treasure Island—what’s out there?” says Linda Edson, owner of the popular Aracely Cafe located at the heart of the island. “Most people, like 95 percent of the time, say that they’re long-time San Francisco people but have never actually visited,” Linda notes. “They’re always interested and ask, ‘How did you end up here?’”

The current ambiance on the island, along with its conjoined counterpart Yerba Buena Island, is one of transition. There’s a curious duality observed while exploring the nearly single square mile encompassing both islands. They’re neatly cradled between the past and future to create a present in limbo; historic buildings shine with marvelous mid-century architecture while construction sites dot across both islands to indicate inbounding life and changes to come.

Only a short trek from the Peninsula, Treasure Island proves its mettle as a day-trip destination with tasty menus, sights to see and a rich history that lures you from one site to the next like an invisible tour guide.

Driving onto Treasure Island is a convenient approach with abundant parking located throughout. Since the island is small in size, it’s easy to find a spot to ditch the car to explore on foot.

However, for those who seek an extra thrill, the most thorough way to explore the island is on two wheels. Biking requires traversing the eastern span of the Bay Bridge and although you’re sometimes exposed to blustery winds and nearby traffic, the rewarding vistas merit the effort. There’s a free parking lot in Oakland’s Judge John Sutter Regional Shoreline park, an easy hopping-on point to the secure bike and pedestrian path.

It’s a little over a two-mile pedal to get from the shores of Oakland to Yerba Buena Island and upon reaching the island, you’re met with a vista point next to Naval Quarters 9 that has historical panels introducing you to the island and the bridge’s history.

It was originally “Emperor” Joshua Norton, a noted character of 19th-century San Franciscan culture, who first had the vision to connect a bridge between Oakland and San Francisco by way of Yerba Buena Island. His vision became a reality in 1936 with the completion of the Bay Bridge and although the western span of the bridge is named in honor of former mayor Willie Brown, credit should equally go to the eccentric Emperor.

Yerba Buena Island offers easy 360-degree views of the Bay but it’s a short tour. The landmarks are few outside of the historic Yerba Buena Lighthouse and the Port of Trade Winds Beach looking out to Clipper Cove, where boat docks separate the two islands. After playing looky-loo on Yerba Buena Island, you’re ready to dip down to sea level to the pancake-flat Treasure Island.

The main road that carries you on is appropriately named Avenue of the Palms after the perfectly manicured and tall Arecaceae that line the bayside stretch. The entire island is outlined by a pathway to encourage a stroll with picturesque views of downtown San Francisco, Marin County and the East Bay.

A Past with No Pirates

Don’t skip the Treasure Island Museum with its rotating exhibits and artifacts to honor the island’s past, which is culturally romantic while also militarily industrial.

The artificial island was federally funded—apparently President Franklin Roosevelt was a proponent of the idea—and built between 1936-37 by the Army Corps of Engineers. One early idea for the island was to host a large airport.

The Museum mentions that the island’s opulent namesake is thought to be attributed to the gold in the soil used for dredging to create the island. However, others insist that it gets its name from the novel Treasure Island by Robert Louis Stevenson, who lived in San Francisco in the late 19th century.

Treasure Island hosted the 1939-40 Golden Gate International Exposition, a marvelous fair to showcase the city’s two new bridges, the Golden Gate Bridge and the Bay Bridge. But the Navy quickly overtook ownership and converted it into the Treasure Island Naval Base. It was from here that many navy sailors destined for the Pacific departed and it was also a major communications center.

Congress awarded the publicly-held island to the city of San Francisco in 2008 for no fee and the island continues to adapt as it draws tourists (and locals alike) to its singular shores. 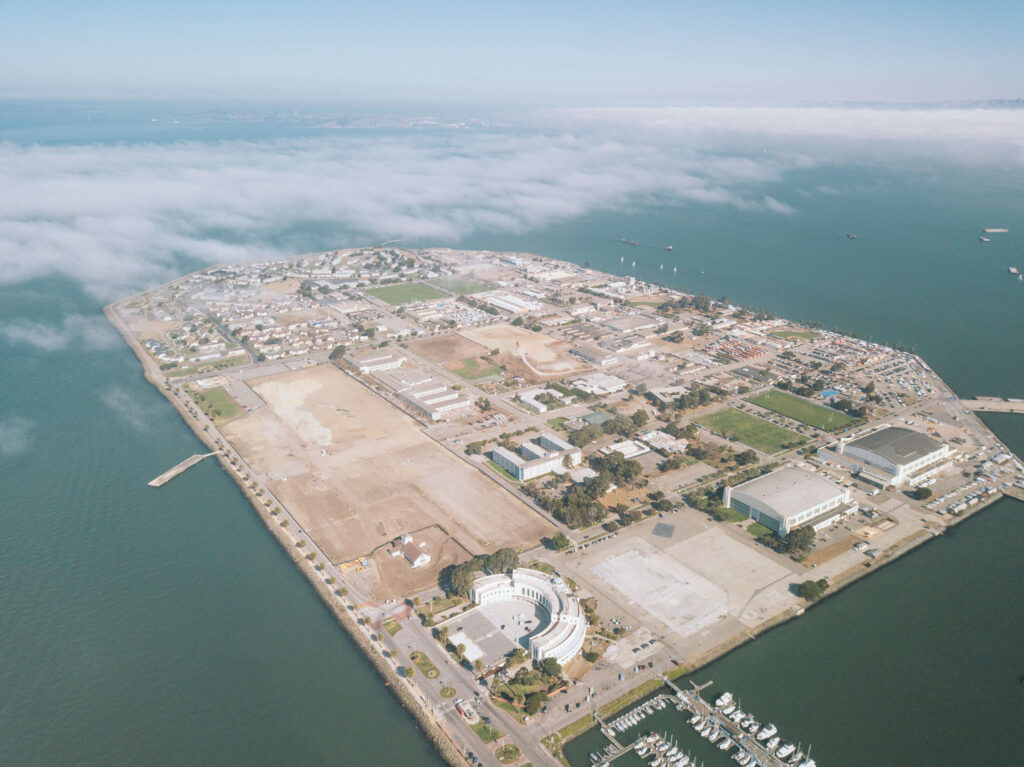 Grub from the Galleys

There are a couple of options for dining including the bayside Mersea Restaurant that offers fish chowder, pizzas and a brioche-bun burger along with stunning views of the city. Near the center of Treasure Island is another culinary treat called the Aracely Cafe.

Chef and owner Linda Edson was born in Argentina to an American dad and a French mom and cut her teeth at hot spots such as The French Laundry and Gary Danko’s. The menu at Aracely Cafe changes seasonally to allow Linda and Chef de Cuisine Ramon Villarreal to play around with flavors. For instance, the tri-tip sandwich has chimichurri, shishito peppers and Point Reyes bleu cheese. However, one item that never leaves the menu (due to demand) is the croissant French toast with dulce de leche cream cheese.

“Because I’ve traveled a lot, I get excited about all cuisine and like to make a mish-mash of everything,” Linda explains. “We try to introduce something that people normally wouldn’t have.”

On the other side of the island is the Woods Island Club from Woods Brewery. In prior years, this craft brew factory was a haven for outdoor games and relaxation with a side of views but the team is currently evaluating its future plans on the island. In the meantime, the brewing and winemaking continues on Treasure Island and Woods beers are available at Aracely Cafe.

“When everybody gets here, they see how it’s so unique and undeveloped. You can see all three bridges with a lit-up skyline,” effuses Linda.” I always thought the Marina had the best views or maybe Lands’ End, but Treasure Island is on a whole other level.”