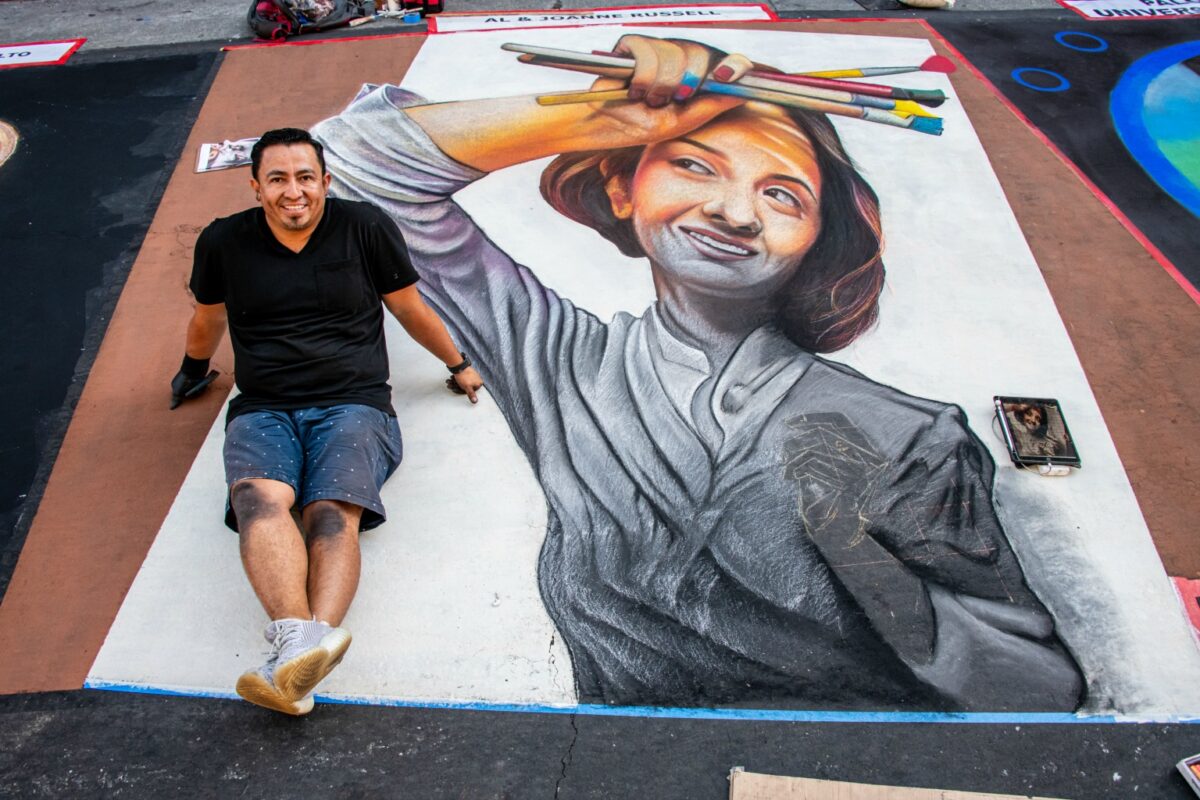 He arrives around 6PM and doesn’t leave until 7AM the following morning. Working off lights he strings around the mural site, Marlon Yanes perseveres in the dark to finish a 91-foot mural for East Palo Alto’s Ravenswood Middle School in time. And while students will be arriving soon, Marlon has another reason for the time crunch: He has to hop a plane for the Pacific Northwest Chalk Fest in Redmond, Washington.

It’s the middle of August when temperatures can soar during the day and construction crews working around the school operate non-stop jackhammers, so a moonlit art session isn’t bothersome for the street painter, muralist and chalkboard artist from Redwood City. Marlon even prefers the solitude of night, painting with only a pair of earbuds in his ears for company. In fact, for ten years while working his 9-to-5 desk job, the nighttime was his domain for exploring his artistic side projects.

For the project at hand, Marlon is restoring a mural depicting smiling faces of students, jigsaw puzzle pieces spelling out the word “respect” and a sky-blue logo of the school. This is a breezy assignment for the adept illustrator who can draw with vivid detail the nuances of a human face or create geometric shapes with chalk on the pavement to create otherworldly, three-dimensional images.

Marlon begins by prepping the wall the same way he learned from his days as a house painter and in order to cover the massive spread, he uses spray paint—a first for the chalk enthusiast. Wrapping up in time for his flight to Washington, Marlon packs all his gear back into his big, black truck and washes the paint off his hands. He officially concludes the process by posting a few photos and a video of the mural onto his Instagram profile.

“Finito” he writes in the post explaining the artwork, a catchphrase he’ll often deploy in posts like these once the paint from a project fully dries.

He may be done with the Ravenswood school piece, but Marlon and his murals are far from finito. He’s painted almost nonstop since leaving his position last summer as the in-house chalk artist and graphic designer for the Northern California region of Whole Foods. Marlon’s work frequently appears in 10- by 10-square-foot boxes at art festivals throughout the Bay Area and he’s been commissioned for art pieces for schools, office walls and even on Redwood City’s utility boxes. With expanding exposure, private clients have begun to reach out via Instagram to hire him for their home projects.

And then there’s the international group of street painters Marlon teamed up with that’s introduced him to new ideas and connected him to empty walls in need of his colorful vision.

“We all met at chalk festivals and call each other ‘family.’ We all learn from each other and teach one another. Some have traits or techniques from all around the world like Peru or Mexico,” he says. “My chalk family tells me that I never pick anything that’s easy to draw. But I need the challenge; if I don’t have a challenge, I lose interest.” 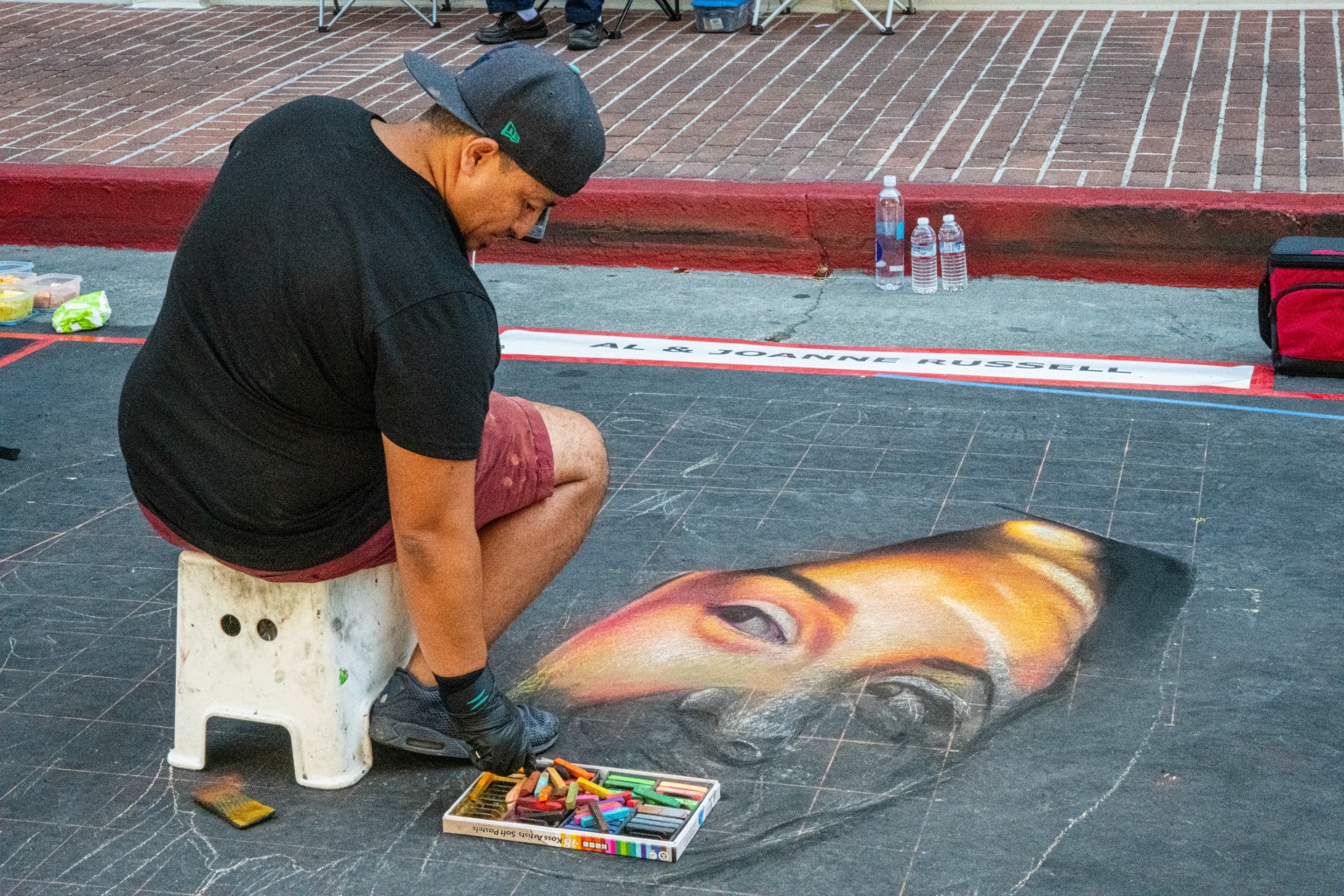 Marlon is most himself when he has a pen in hand and he’s been like this since he was a toddler. Born in Guatemala, he recalls a story when he was five years old and fell off a bicycle, shattering his leg. When trying to describe to his mother what happened, Marlon’s explanation was fittingly put into an illustration.

“When I saw my mom, I asked for a paper and pencil to draw the bike,” he says. “My mom said that even for a five-year-old, you could see the shape of the bike. I said, ‘Here’s the leg, here’s the bike and wahh.’ I even drew the crying sound.”

Marlon’s mother was a teacher in Guatemala City and his father worked as an accountant for the government. In the midst of the Guatemalan Civil War, his father fled to the United States and the rest of his family joined him in Redwood City when Marlon was eight years old. They lived in the North Fair Oaks neighborhood on Douglas Avenue. Near their house was a corner market where Marlon would purchase copies of Lowrider magazine and zines that inspired him to develop his art. “It was something done in color and pen and I had only drawn with pencil before,” he says.

Marlon attended Selby Lane Elementary School, Kennedy Middle School and Woodside High School where he excelled in math (“I pissed people off because I used to mess up the grading curve,” he says. “I had 117% in Algebra II!”), but he continued to stoke his artistic passion. The margins in his notebooks were scrawled with doodles and he designed the logo for his high school’s soccer club, the Madera Roja Scorpions, which continues to be the logo today. He also drew the sets and stages for the drama department, a position he valued because he wasn’t in the spotlight.

“I liked that, being a little behind the scenes,” he says. “When street painting, there are so many people walking around but I put my earbuds on to tune everything out.”

Marlon later attended Cañada College to study multimedia and worked as a house painter on the side. He eventually left school to manage a Fresh Choice restaurant and later worked in a sales job for underground construction products.

In March 2008, Marlon began working in the prepared foods section for Whole Foods in Redwood City. The new regional director at the time wanted to spruce up the store with chalkboard illustrations but the in-house artist was a skilled graphic designer who couldn’t draw by hand. Marlon stepped up.

“The regional president came in afterwards and asked who did all of these illustrations, only to learn it was some guy in prepared foods. I was there chopping up stuff!” Marlon says. “Later I got a call from the person in charge of store openings who asked if I’d come help open a store in Reno in 2009. Since that Reno store, I’ve opened 20 stores across Northern California.” 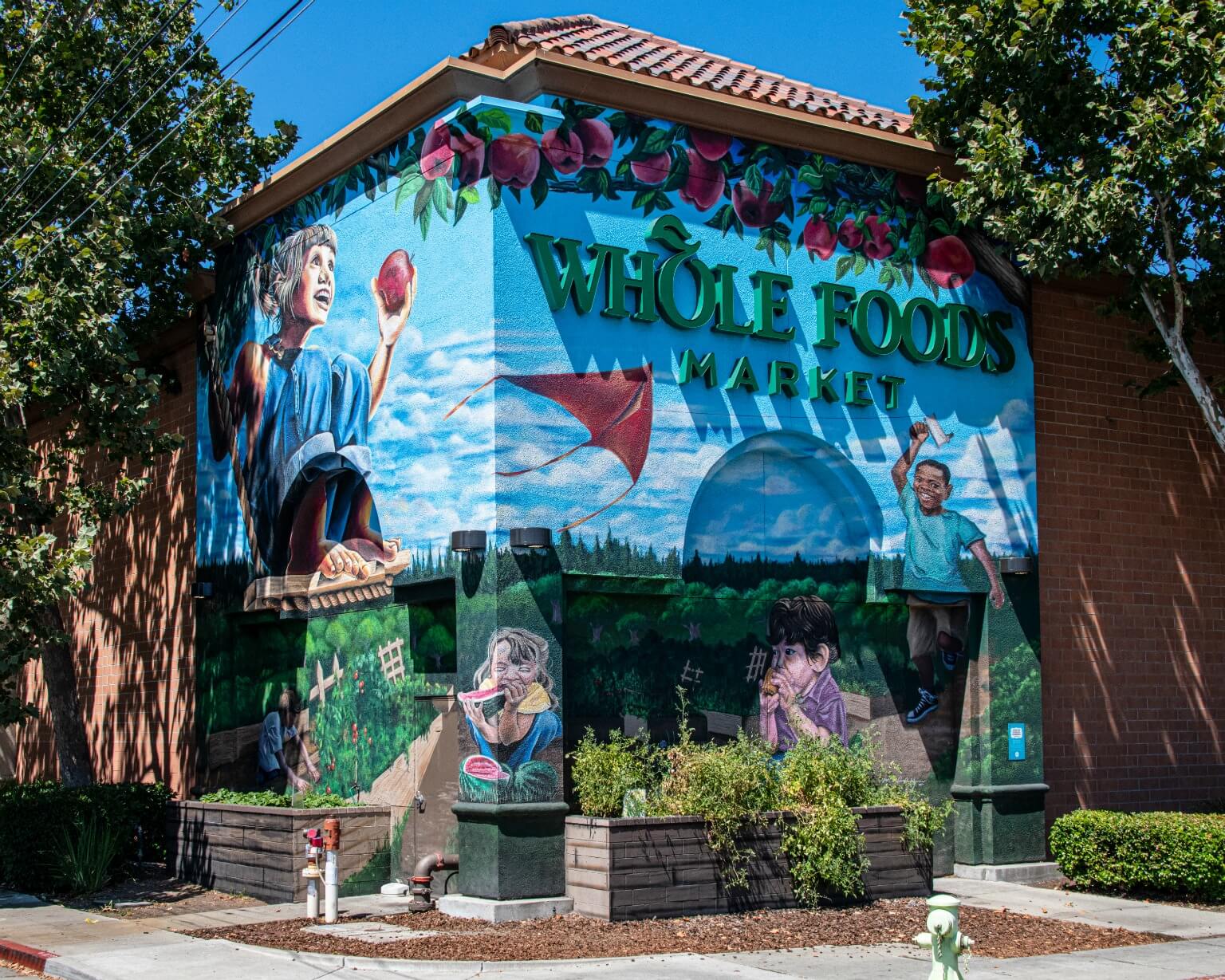 One of his more marquee projects is the mural “Seeds for a Healthy Tomorrow” as seen on the outside façade of the Redwood City store. Marlon worked with Whole Foods until summer 2018 when he struck out on his own. Along with his packed calendar of commissioned projects, he travels throughout the country to participate in art festivals. After Washington State, he has stops in Atlanta, Kansas City, Miami and Venice Beach, all before Thanksgiving.

This past August, Marlon returned to the Palo Alto Festival of the Arts where he first began to street paint. This year’s appearance commemorated his first decade as a professional street painter, where his unwavering passion for drawing converged with the skills he acquired from odd jobs to create his future path.

“All those different, random jobs that I had, I realize now how it’s helped me,” he says. “With house painting, I can prepare a wall and make wire brush to scrape old paint off the wall. Restaurant management for Fresh Choice helped teach me how to deal with customers and people. All that stuff I still use. It wasn’t a straight line, it pinballed. I didn’t see it until I started having to use it.”