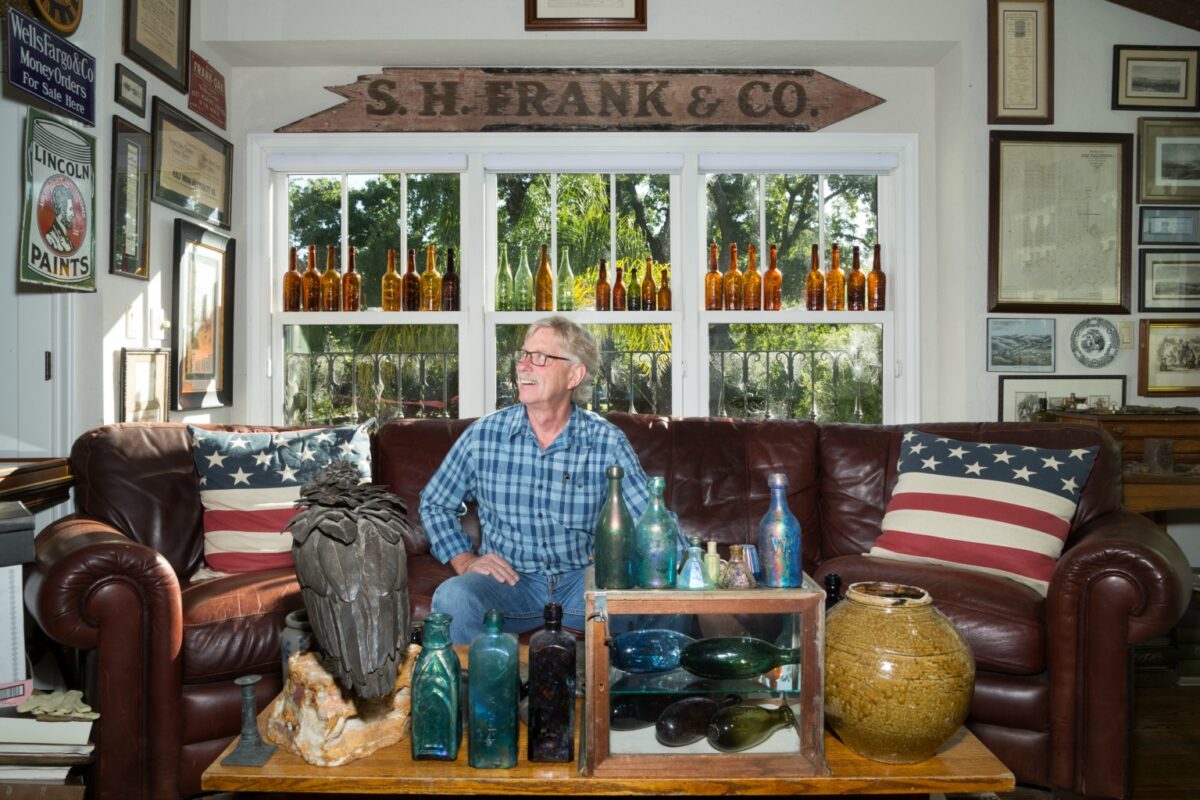 In 1968, 11-year-old John Shroyer was hiking from his home in the Belmont Hills down to the Pulgas Water Temple when he stumbled upon a decrepit old dump on the side of the road. As Highway 280 had not yet been constructed (and wasn’t until 1971), John had free rein and decided to explore it. What he found would color the rest of his life.

Forgotten cans, car parts, glass and pottery were everywhere. What would have been garbage to most people was a treasure trove for young John; he didn’t know what he was doing except that the bottles he unearthed captivated him. That was the day that incited his lifelong passion for bottle collection.

John told his 6th grade teacher about the finds and, coincidentally, the teacher’s husband was a collector himself. From this man, John learned that you can date a bottle by how it is made and marked. Soon, John was identifying Ernette flavoring extract bottles, cobalt blue Philips Milk of Magnesium bottles and mason jars just like he’d seen in his grandmother’s kitchen. That dump turned out to be from 1910.

The Peninsula is not just a beautiful place to live, it also has a rich history—that interests John on its own and also makes bottle collecting (and other types of collecting) lots of fun. Throughout the 1850s, ’60s, ’70s and ’80s, the Peninsula was dotted with logging camps and saw-mills for redwood trees. The men who worked at these camps would drink beer, whiskey and wine, and the glass-blown remains of those beverages still exist. At age 14, John heard that crews were putting BART down on Market Street in San Francisco as well as beginning work on the Transamerica building; he got his father to take him north to scavenge the construction sites. John learned that from 1849-1851, the Financial District of San Francisco burned down multiple times. All of the garbage and debris from those fires fell into the water, became landfill and then buildings were built right on top, burying all sorts of treasure underground…even old ships. John and his dad hauled any finds back home and searched through them together, sometimes coming home so entirely covered by mud that his mom would make them wash off in the front yard before coming into the house. John was hooked on the hobby.

Even though John has come out ahead on some trades with fellow collectors, this passion, unfortunately, didn’t pay the bills. He is still actively digging, but he has also been a real estate agent with Sotheby’s in San Carlos for many years. John attends collectors events and has met loads of fascinating and eccentric people through a shared love for this hobby. He now limits his collection to just western glass (most of which is embossed) because of his day job.

Bottle collection originally emerged in the 1950s and ’60s, and then rose to popularity through the ’70s and ’80s. There were fewer rules then. Nowadays, it isn’t as easy to just go excavating on private properties; there are hoops to jump through and official papers to file that are prohibitive of some of the more fun parts of the hobby. But John does keep track of demolition permits (which are public record), and when he hears that something interesting is being torn down—or put up—he hops in his car and makes a beeline. Sitting in the 400-square-foot room that he’s dedicated to his favorite bottle finds from over the years, John has a proud twinkle in his eye that one can only imagine is the same one he had at age 11 on that first exploration in 1968. “They are all similar, but they are all unique,” he says with a smile.