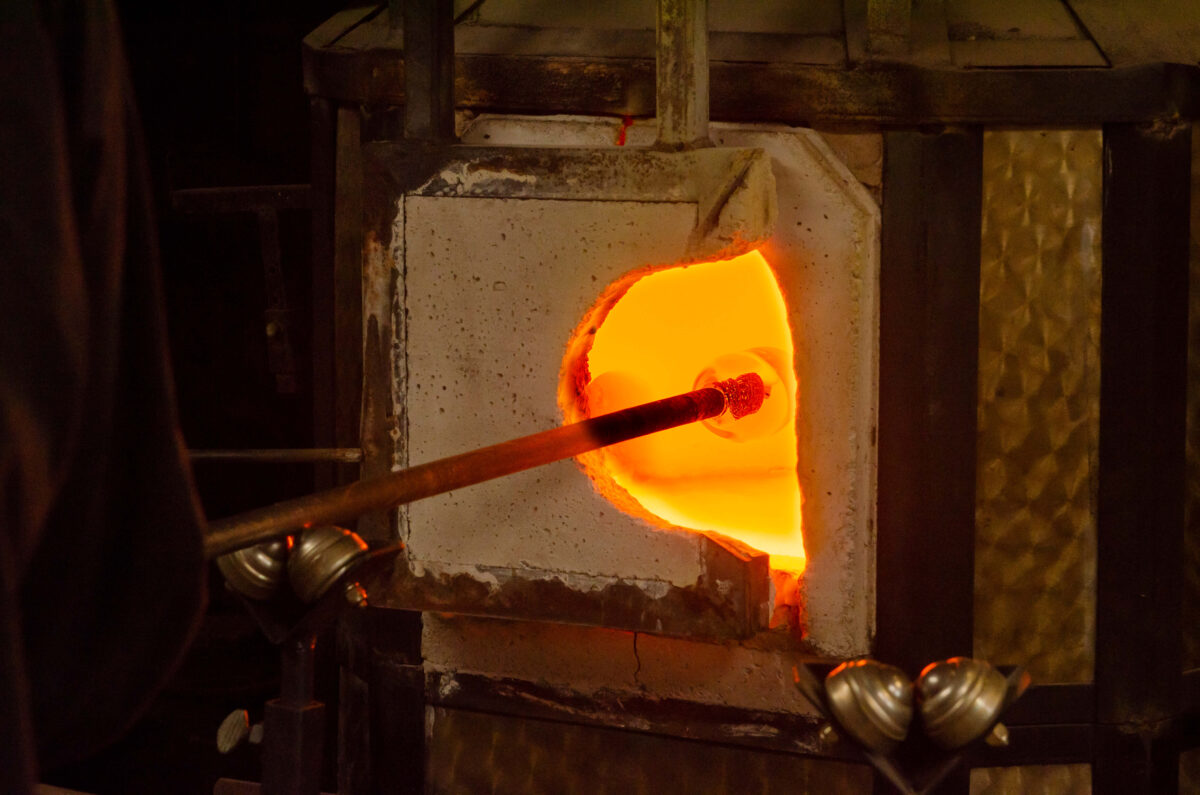 The liquid glass glows in the fiery furnace, its molten gold flowing with every turn of the long metal pipe in my hands. “Slow down,” advises Doug, as he lightly touches my arm. “Use your fingertips, not your wrists. The glass will respond to even your smallest movement. You want smooth, rounded edges. Aim for a Q-tip shape.” Standing within arm’s length of the ferociously hot furnace—also called a glory hole—I quickly feel my face and chest warm. It’s not surprising that a glass blowing studio is also known as a hot shop. “Some people cannot handle it,” Doug acknowledges with a smile. “The physical nature of glass blowing is intense.”

Half Moon Bay Art Glass, which Doug Brown has owned and run for the last 12 years, is located on a pastoral property shared with La Nebbia Winery, just down the street from some of the biggest local pumpkin patches on the Half Moon Bay Coast. Doug creates and sells his own art glass, most spectacularly the jellyfish lighting fixtures that radiate with an otherworldly gleam, but the bulk of his business is in teaching others to make a unique glass art project of their own. “I lead the project, of course, but it does belong to the maker,” he emphasizes. “They get the bragging rights. I’ve taught over 48,000 people to make glass.” 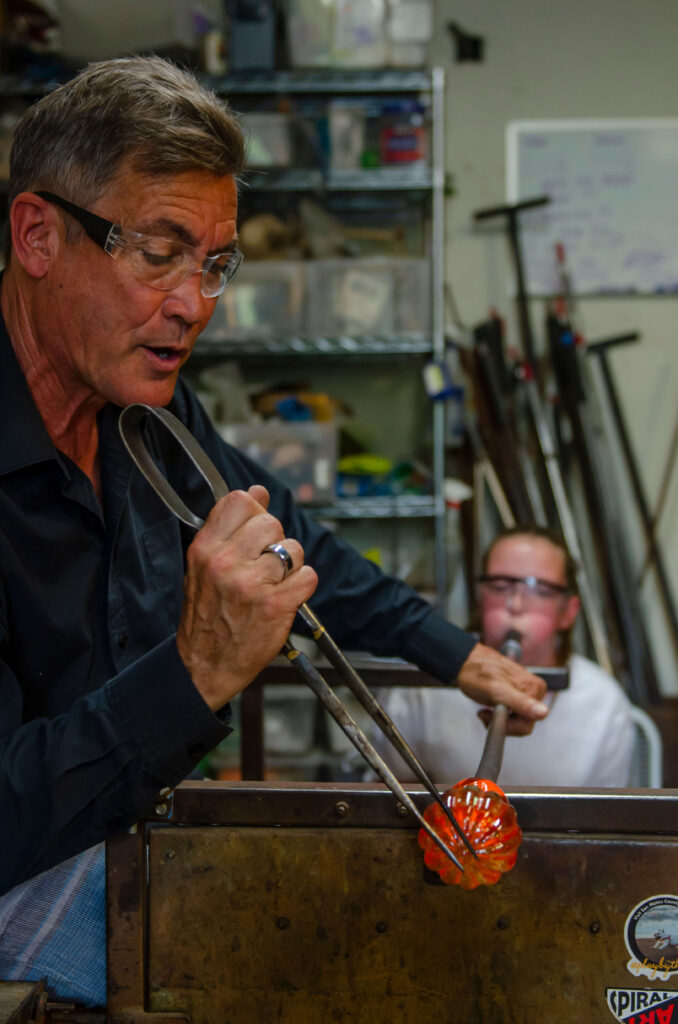 Doug’s workshops generally consist of around six to eight people, though he occasionally hosts larger corporate events with the staff of three teachers who support him. The amateur artisans who visit HMB Art Glass can make projects ranging from paperweight hearts and terrariums to holiday balls and milk jugs. But, by far, the most popular project is the pumpkin.

“Pumpkins are a great canvas for color,” Doug notes. “They offer a manageable degree of difficulty and they’re charming. I’ve probably participated in making around 100,000 of them.” Every October, he joins in Half Moon Bay’s pumpkin festivities by creating a glass pumpkin patch outside his studio. Like gourds from a fairy tale, the pumpkins reflect every shade imaginable from translucent turquoise to rosy amber, from deepest emerald to sunny yellow.

Doug guides my hands in rolling hot glass into the fine particles of broken glass called frit. “You get a layer of color and melt that in,” he explains, “but the magic happens when you layer more than one color.” After my first round of color—a deep cobalt—melts, I roll it in a chunkier frit of silver and watch them come together in a hypnotic swirl.

After the glass is reheated, Doug leads me in blowing out the shape. I kneel on the floor with the blowpipe in my mouth as he rolls the pipe and contours it with a block to round it out. The degree of breath matters and Doug coaches me to blow harder, then softer, to get it to the right form—a palm-sized sphere. The pumpkin’s ridged sides are created by standing on a low platform and very carefully dipping the hot glass into a steel mold.

So seamless is Doug’s process for making your own objet d’art that you may be fooled into thinking you have a knack for it, but glass is a highly temperamental substance demanding constant attention. If it heats or cools too quickly, the glass will shatter, crack or bubble, ruining all of your hard work. But Doug’s 40 years of experience have given him a kind of sixth sense about when to mold, fire or blow glass to get the perfect surface and shape.

The final moments of making glass are fast-paced. The glass has to be gently ground away where it’s connected to the pipe with large steel tweezers known as jacks. With one sharp tap of a wooden rod, the glass drops from the pipe into a rag-lined bowl, before being quickly transported to the annealer, which is set at around 900 degrees. The glass will remain there for 24 hours and the temperature will drop incrementally to maintain the piece’s integrity. 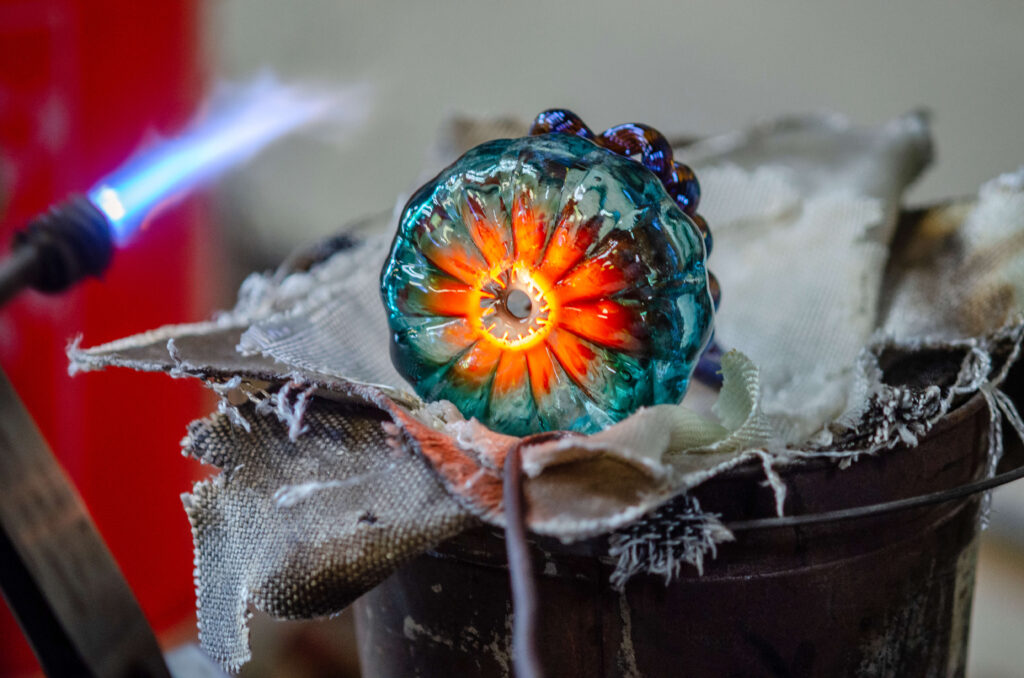 Originally from Santa Clara, Doug first became fascinated with glass when he was in his twenties, chasing adventure as a traveler on a tall ship in the British Channel. “I saw etched glass windows in a shop in St. Malo, France—they were beautiful,” he recalls. “I’ve always been more of a maker than an artist, but I knew that I wanted to learn how to do that.” Doug began working for Valley Fixtures in San Jose and tackling the kinds of projects that caught his interest. “We made large-scale art glass pieces—mostly etched glass and stained glass for clients all over the world, including King Hussein of Jordan.”

Seeking a more stable living to raise a family, Doug transitioned to a career making the glass tubes used in microchip production. But the lure of making his own glass projects never left him. He maintained a hot shop on his back patio, and in 2009, he opened HMB Art Glass so that he could return to glass blowing full-time. 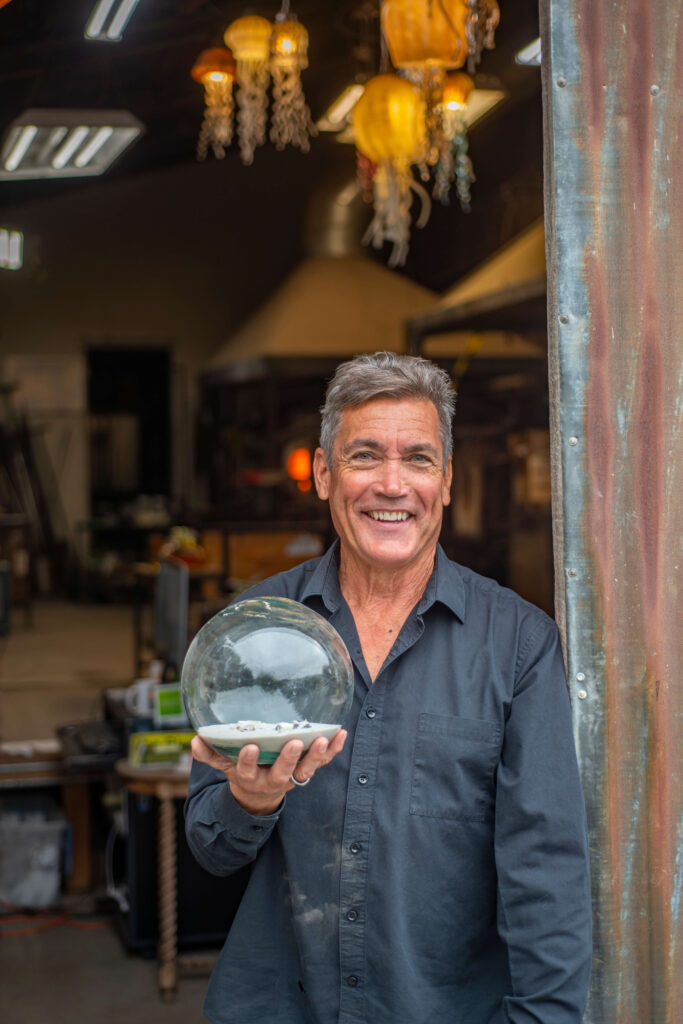 Doug is currently in the midst of opening another glass blowing studio on Mare Island this fall, near several breweries and distilleries. He’s also planning for a traveling van, The Troubadour, that will be a mobile glass blowing unit, extending his outreach to new places and events. What’s motivating his business expansion is clear: the satisfaction he gets from guiding others to work with such a temperamental, malleable and almost mystical material. “It’s so fun seeing the magic in their eyes when the pieces come together,” he reflects. “For many, it’s on their bucket list of things to do. Others never dreamed they could do anything like it.” 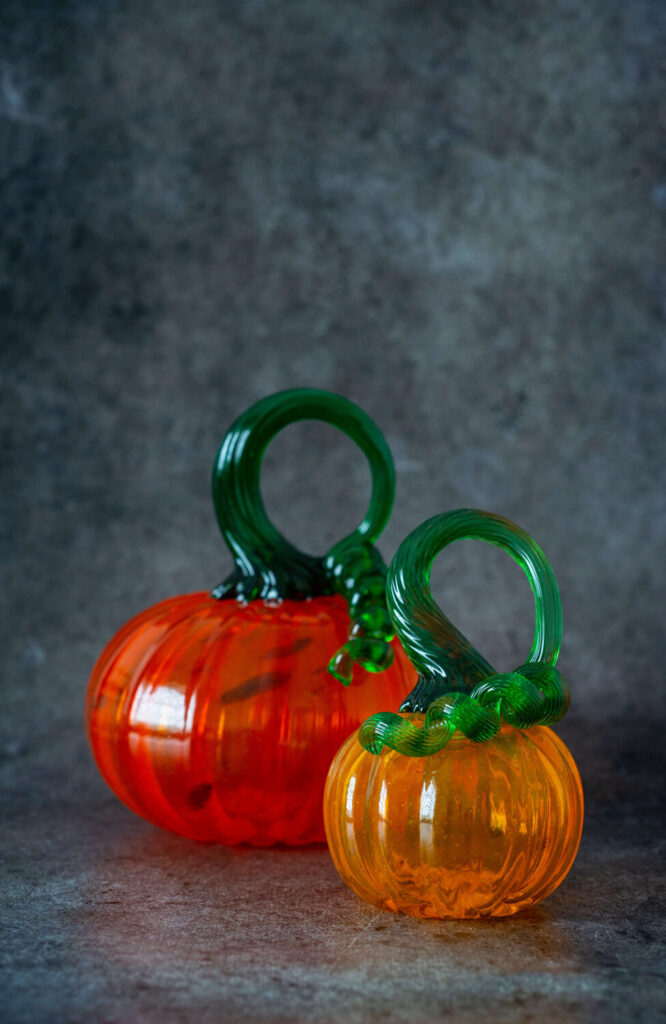