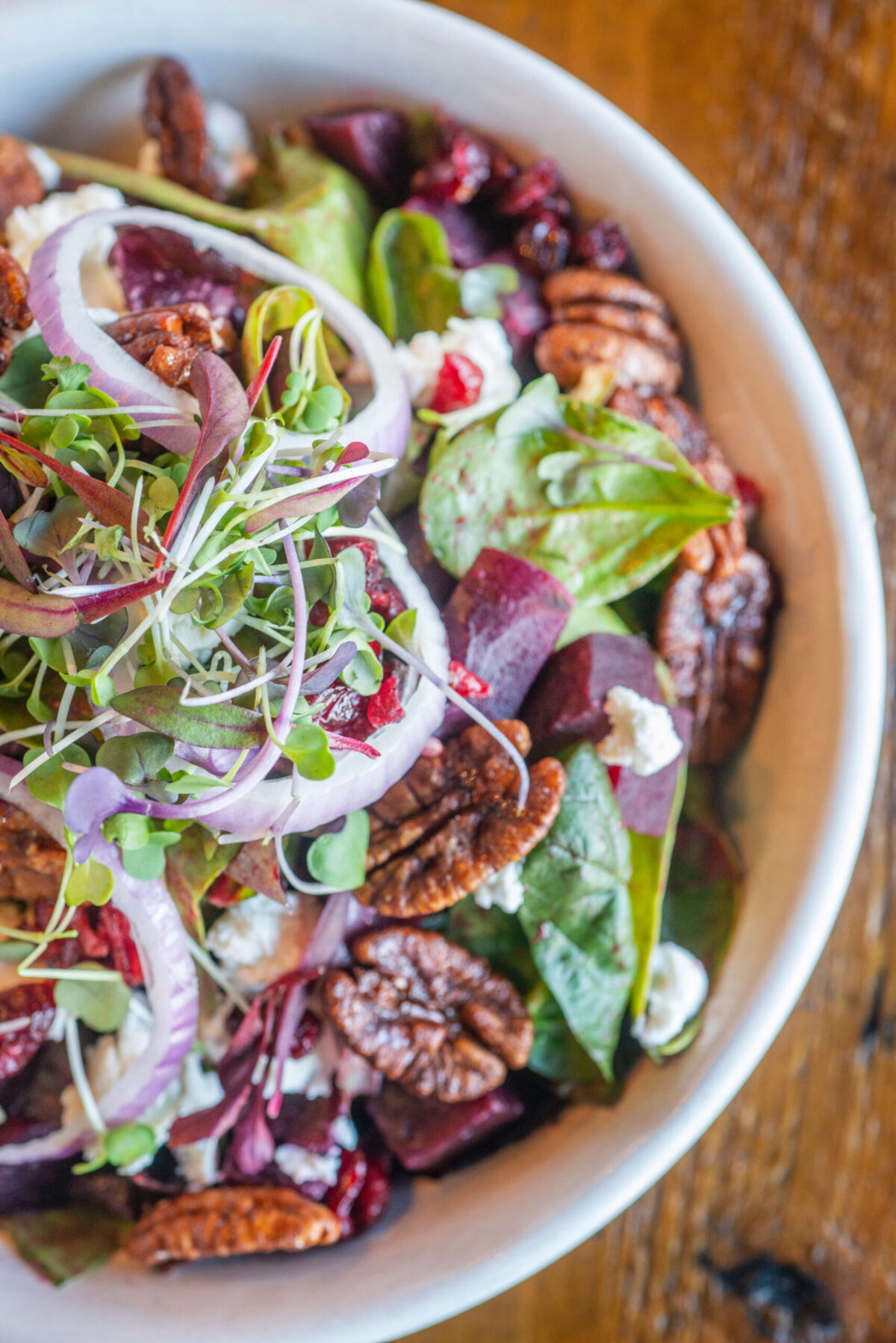 From the most westernly end of the Woodside Plaza shopping center in Redwood City, fairy lights strung over an outdoor dining parklet twinkle like a beacon. Step inside Redwood Grill, and you’ll likely see Renee Barton doing the restaurant owner’s version of a whirling dervish. “Thank you for holding,” she says, before taking a phone order for a rotisserie chicken with a side of whipped potatoes. “Order #85 called and asked for no caramelized onions on the Redwood Burger,” she clarifies to Chef Johnny in the kitchen. Catching sight of familiar faces in the doorway, Renee’s eyes light up with a smile: “How’ve you been? It’s so good to see you back.”

As she tackles the dozens of details and decisions in her day, Renee is clearly in her element, exuding an almost unflappable calm. That’s because this rustic chic neighborhood eatery represents more than a business to her—it’s the fulfillment of a personal promise. 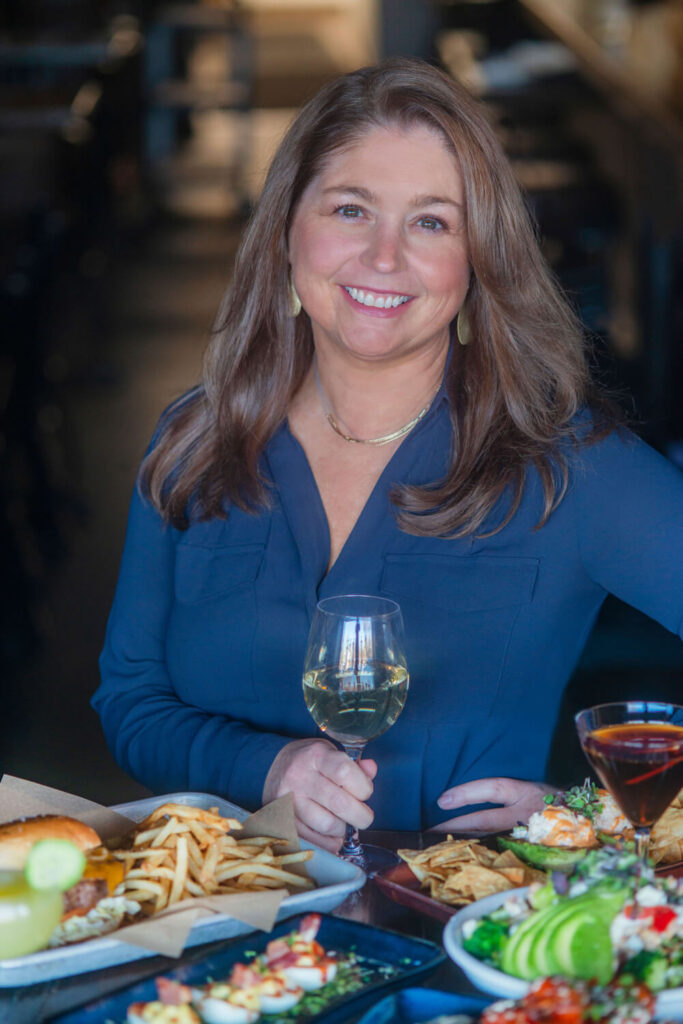 A Peninsula native, Renee’s childhood memories are rooted in Burlingame, San Mateo, Belmont and San Carlos. “I grew up in the era of Marine World and celebrating birthdays at Farrell’s,” she says. “The neighborhoods were closely-knit and you stayed out until dark playing with your friends.” She laughs recalling one of her first jobs—working as a hostess at Burlingame’s theme restaurant Bobby McGee’s. “I had to dress up as Snow White, and I’d race into work wearing this gigantic dress with a bow on my head. Once I got a taste of that glamour,” she quips, “it was history!”

Although Renee was passionate about cooking and even considered culinary school, she felt equally drawn to tech and finance. After graduating with an economics degree in 1994, she took a position at Charles Schwab but continued to pull night shifts in the restaurant industry. “It wasn’t the direction I went,” she says, “but I always loved the energy.” 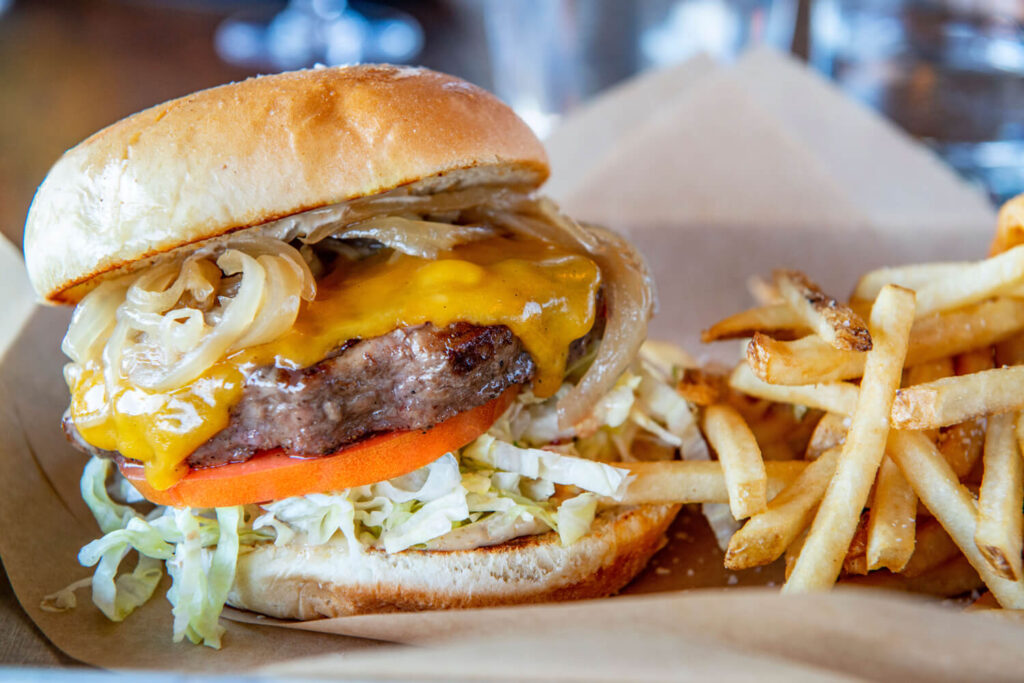 By 2001, Renee had progressed into investor relations for San Jose-based Power Integrations. She flew out to New York for what she thought would be a routine 8AM meeting in the World Trade Center. The date was September 11. “It was life-changing,” she affirms, about surviving the traumatic experience of escaping from the South Tower. “It makes you think about everything. What am I doing? What’s important? What’s not important?” (See sidebar below.)

In the years that followed, Renee set her mind to living with purpose. She married the boyfriend she had been dating and they moved to Redwood City. She pursued a challenging career path that ultimately led her from being a CEO’s chief of staff to co-founding a startup. Two decades into her professional journey and with two boys added to the mix, she found herself reassessing her lifetime goals and what she still hoped to achieve. “There was always something in the back of my head, this pull from the restaurant industry,” she says. “And I thought, ‘If not now, when? There are no guarantees.’” 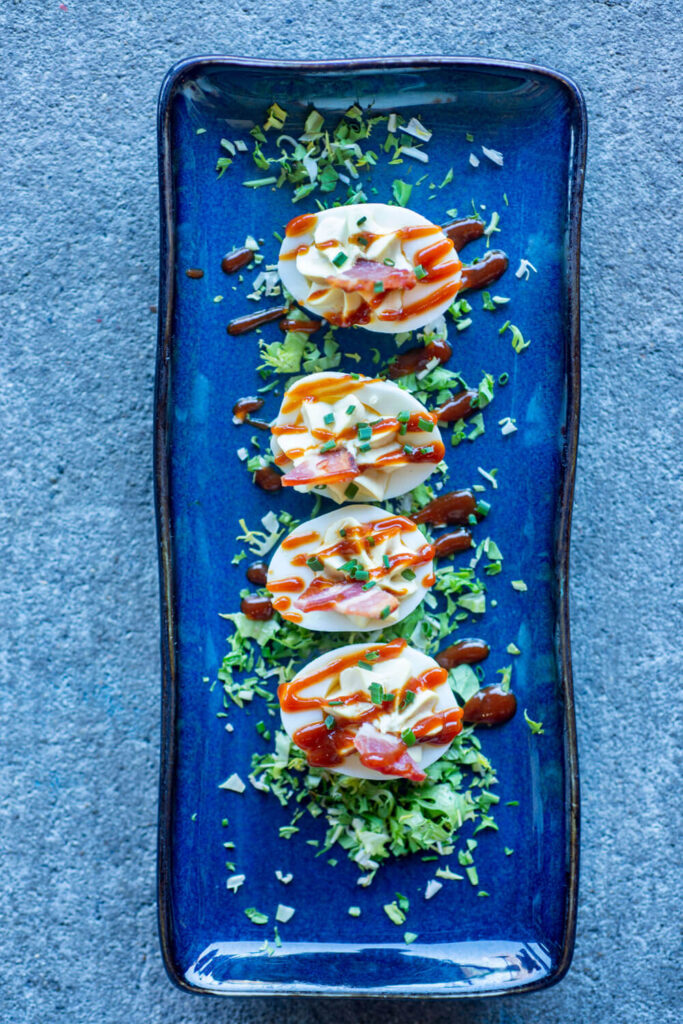 Thinking back on her childhood memories, Renee realized what was missing from the Woodside Plaza area in Redwood City. “We were looking for a neighborhood restaurant,” she recounts, “and there wasn’t really one nearby—a place you could grab a glass of wine or a cocktail but still bring your kids or meet a friend—an easy, accessible place.”

In the local shopping center, Renee spotted a vacant restaurant property, formerly Copenhagen’s, and recognized the value of a central, convenient location and bountiful parking. With the support of her husband and children, she made the pivot. “It’s quite the switch but I believe you have to follow your passions when you can,” she says. “Plus, I knew I could bring my business acumen to it. I didn’t just build it for the sake of building it—I saw there was a real need.” 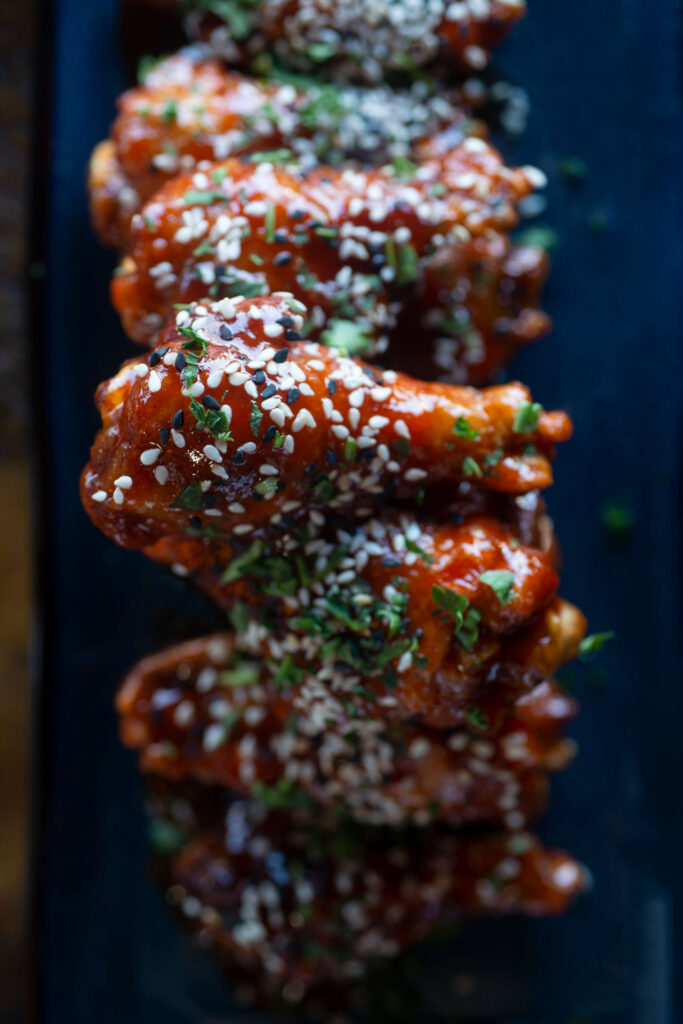 After completely remodeling the site, Renee launched Redwood Grill in 2016 with the aim of bringing a casual, family-friendly restaurant experience to the heart of the community. “We’re tucked in the back a bit, and when you walk through the doors, it’s surprising to people,” acknowledges Renee. “We put a lot of energy into creating a rustic, warm vibe—a place you’ll see people you know, where you can catch up with friends and neighbors.”

For the past two years, Renee has partnered with executive chef Johnny Arreola to continue crafting what she calls “California comfort food with a twist.” Starters range from Lucy’s Grilled Avocado stuffed with shrimp salad to tongue-tingling Honey Sriracha Wings and Devilish Eggs topped with candied bacon. The Greens and Goats salad sprinkles in beets and candied pecans; toasted chickpeas add extra flair to the Kale Chicken Caesar. Mains include St. Louis Ribs, Rotisserie Chicken Breast and Grilled Salmon—along with a selection of Chef’s Tacos and artisan pizzas. 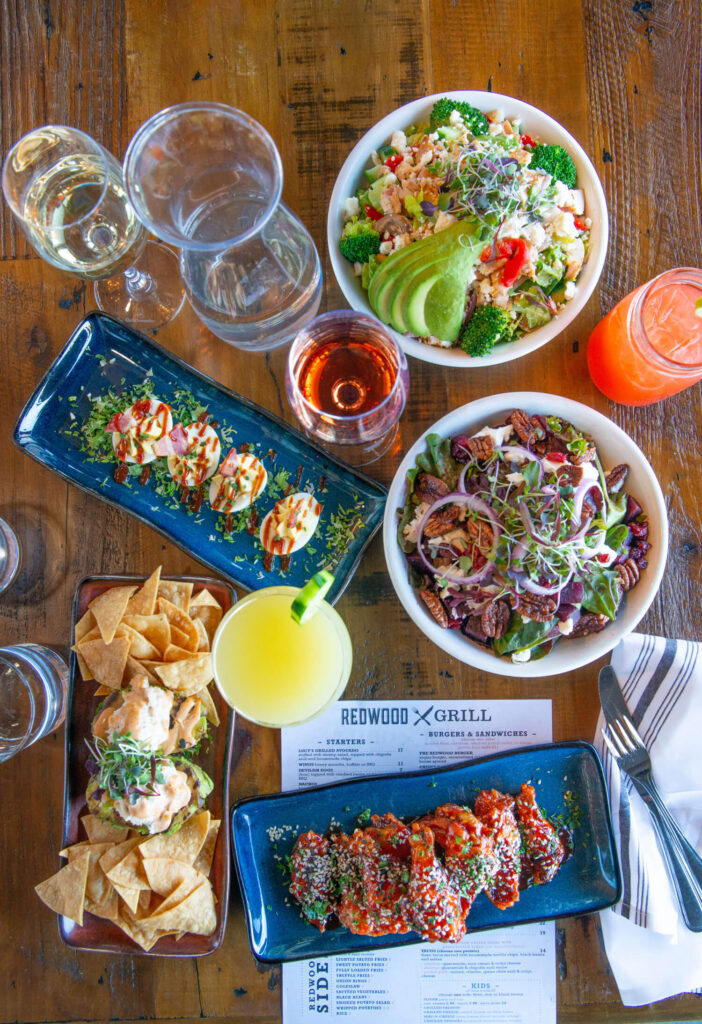 Renee recognized further untapped opportunity—and began envisioning more kitchen space for catering and a private room for parties and events. When additional square footage opened next door, she jumped at the chance to expand. The build-out began in late 2019 including plans for Redwood Market, an adjoining storefront for easy to-go pickup and grab-and-go menu items. “A lot of people don’t have time to sit down or wait for a to-go order,” explains Renee. “Being a busy parent myself, that’s what I needed.”

Although Renee didn’t anticipate a pandemic unfolding in 2020, she was in sync with the changing times when Redwood Market opened last fall. As word of mouth spread, the Market kicked into higher gear, adding craft cocktails-to-go and even Redwood Grill’s own house-made sauces, dressings and rubs. “Our customers’ loyalty has just blown me away,” Renee says emphatically.

Moving into 2021, Renee is looking forward to hosting Redwood Grill’s annual 9/11 commemoration honoring Redwood City’s Fire & Police K-9 Program, an event that will be especially meaningful in this 20th anniversary year. “It’s a positive way for me to remember,” observes Renee. “It was the biggest learning experience of my life and it shaped who I am today.” Renee can’t help but note the parallels to the current ‘unprecedented’ times. “It pulls a lot of the same emotions,” she reflects. “I absolutely think there’s relevance to what’s happening now—the way everyone is coming together.” 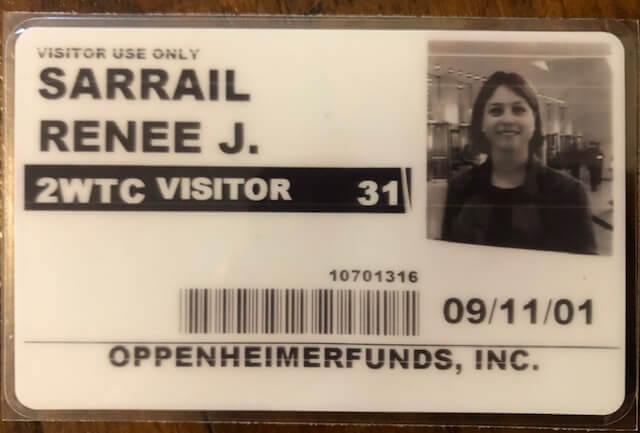 On September 11, 2001, I woke up to a beautiful sunny day in New York. I was on a business trip and had scheduled the first meeting for 8AM at Oppenheimerfunds on the 31st floor in the World Trade Center’s South Tower.

We were just starting to wrap up when we heard a loud boom and the whole building shook. At the time, I thought to myself, ‘That was an earthquake, right?’ because I’m from California.

We didn’t have a straight look at the North Tower that got hit first, but all of a sudden it was like a dump truck threw debris past our window. Your mind is trying to process something that it just really can’t process. We had to push up against the window to look up and we could see a bunch of black smoke around our tower. I thought, “Oh no, maybe it was a bomb,” but we just didn’t know.

The alarm didn’t go off because our building hadn’t been hit yet, but we still started evacuating. I went right to the stairs, which was a very California thing: ‘Earthquake – Take the Stairs.’ I started to walk down and it was pretty quiet going down the stairwell, but when the door
finally opened after 31 flights, it was a completely different energy.

The first floor of the World Trade Center has big glass windows, and I started to go into a bit of shock because my eyes couldn’t believe what I was seeing. There was smoke and fire outside. It looked like a war zone out there, and the Port Authority is saying, ‘Move! Move! Move!’ It was a very long evacuation route. You have to walk down the escalator and then you’re under the building in the plaza underneath and then you go straight and then upstairs and then you finally get out. As we were walking down the escalator, the second plane hit our tower. It was just mind-blowing.

The building shook so hard tiles started to crack, and that was the moment of pure panic, when hundreds of people started running as fast as they could. What will always stick with me from that day is how everyone helped one another and acted selflessly. This giant group of people struck by fear and confusion rose to the challenge and were unwavering in their support of one another. No one was trampled; no one was left behind.

At that point we saw firefighters coming in and I’m doubtful they survived because I believe they were among the first ones in. They are true heroes. They knew more than we did yet they ran inside with steadfast commitment.

I finally got out of the building, but I couldn’t wrap my head in any way, shape or form around what was going on. I started the four-mile walk back to my hotel, and I was a few blocks away when the towers came down. I couldn’t see the towers but I heard a rumble that didn’t end—it just got louder and louder. When I finally got a view in that direction, all I could see was a 50-story black cloud. Fortunately, I was far enough away at that point that I didn’t get hit by any of the debris.

I started to get small tidbits. A taxi driver who was listening to the radio said it was a terrorist attack. I talked with my husband who was my boyfriend at the time and he told me, ‘They have hit the Pentagon.’ I stayed in New York for several days before getting the first direct flight from Boston back to the Bay Area.

For me, it was a life-changing experience. I have to live with purpose because there is this feeling that I got another shot. 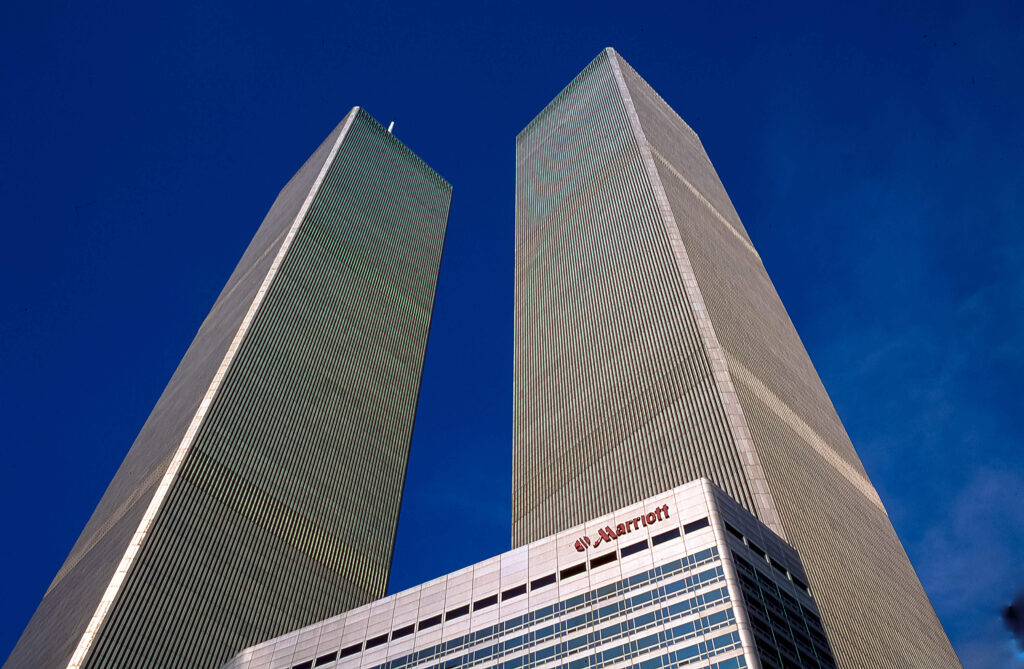