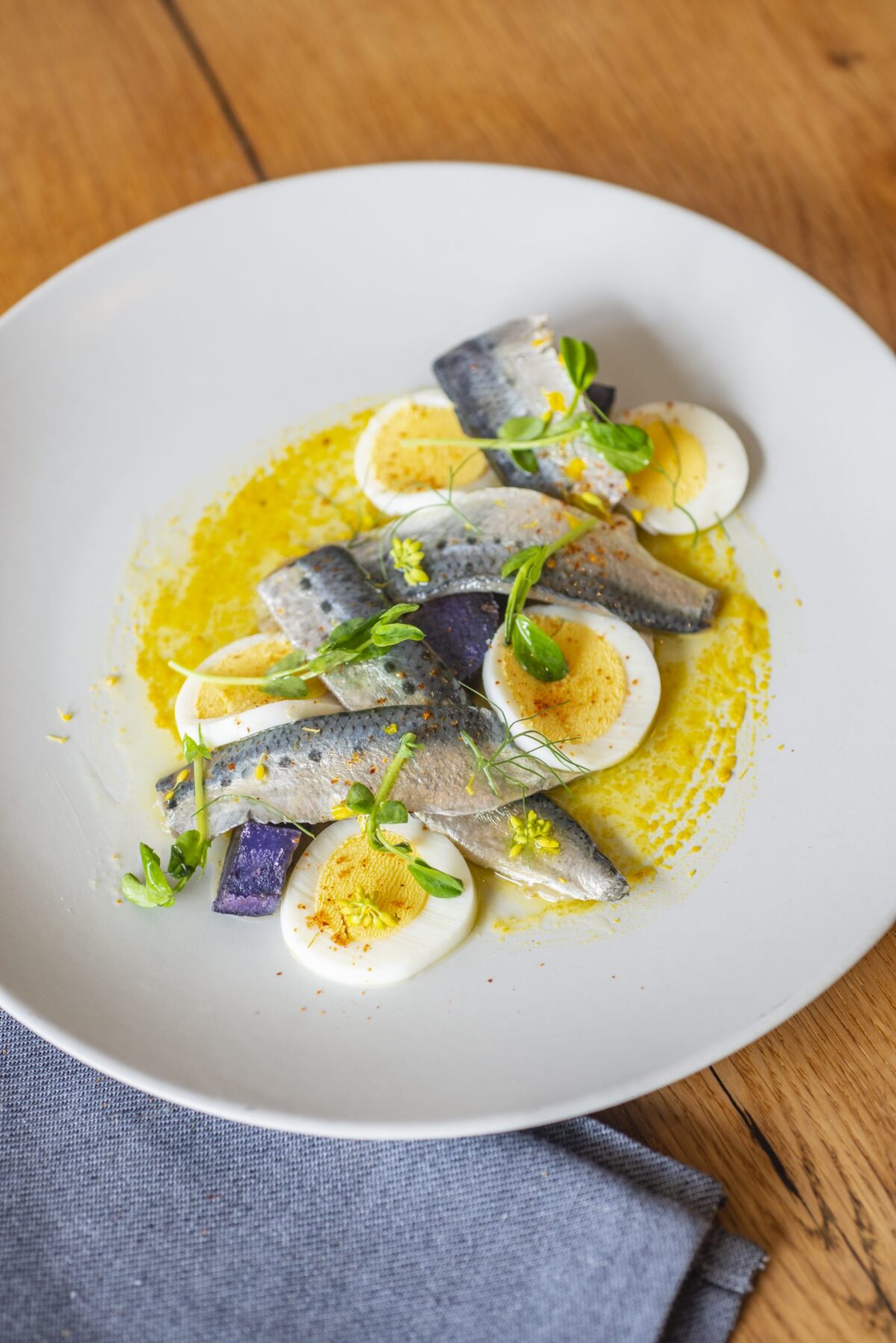 Henry Eng’s most heartfelt childhood memories are of his grandaunt taking care of him and his brother. Talking about her, he pauses, removes his glasses and wipes tears from his eyes. “She has played an instrumental role in my life. Thinking of her brings up strong emotions,” he shares. “The way she cooked for us… it was like magic.”

Henry recalls going to the daily market with his grandaunt, where everyone knew her name and she would carefully pick out the freshest produce and meat. And he credits her with being the biggest influence behind his newest endeavor. As the chef/owner of number5kitchen, a family-owned and -operated restaurant in San Carlos, Henry is committed to serving farm-to-table local cuisine crafted with seasonal hand-picked ingredients.

Growing up in Hong Kong, Henry was surrounded by family and culture. Every night, at 7PM on-the-dot, the extended family, living in separate apartments, would gather for dinner. On Sundays, the larger extended family of 20 would come together for a lively evening of plentiful, freshly-prepared delicious dishes. Hong Kong, as a cosmopolitan city, offered Henry exposure to many different tastes and types of food. Unbeknownst to him at the time, this was just the beginning of his experience with culinary capitals, including New York, London and Singapore.

After earning a degree in information systems, Henry pursued a career in risk management. He first landed in New York, where his office happened to be right across the street from Les Halles, where Anthony Bourdain got his start. During this time, Henry enjoyed cooking for himself and friends. After a short stint in London, he ended up back in Hong Kong where he met his wife, Carly. Their last stop on the metropolis journey was Singapore. After city life and Henry’s career had taken their toll, the Engs were ready for a slower-paced lifestyle. So, in 2011, Henry and Carly decided to move to California. Drawn by family ties in the Bay Area, they put down roots in San Carlos. 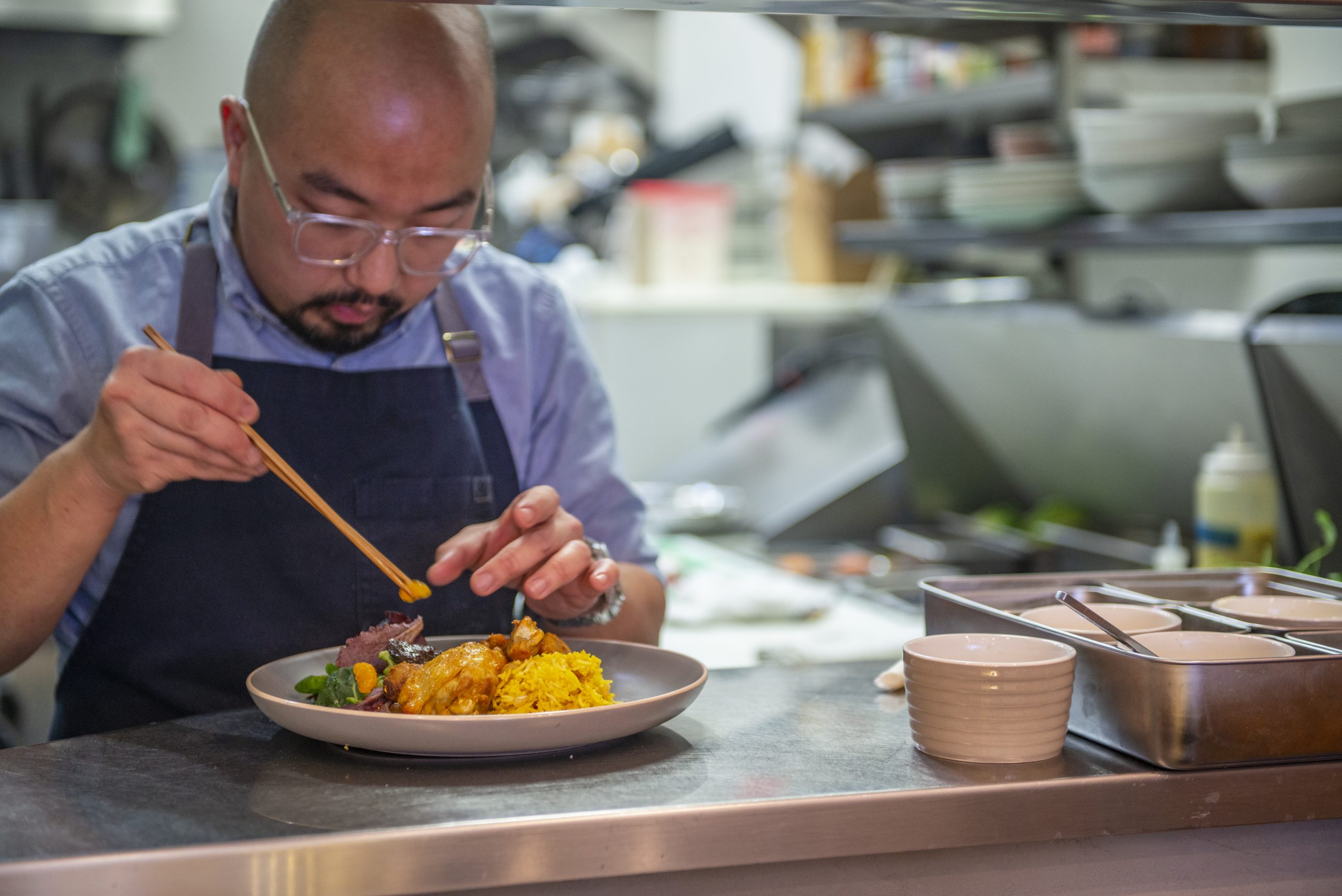 The question facing Henry: What to do next? Recognizing Henry’s passion and talent for cooking, Carly suggested that he become a chef. With her encouragement, he began his pursuit.

First came a six-month, eight-hour-a-day, immersion program at the French Culinary Institute where he graduated top of his class. Henry then spent two years working for Chef Tusk at Cotogna in San Francisco. For Henry, it was an eye-opening experience. “I had never seen so much variety of herbs, fruits and vegetables,” he recounts. “Cooking seasonally was my biggest takeaway.”

Henry’s next opportunity, as the sous chef and operations manager at Mayfield Bakery in Palo Alto, gave him valuable insight into the business aspects of running a kitchen. With the intent of owning his own restaurant, Henry looked for the logical next step. It came in the form of KitchenTown, a San Carlos-based incubator program that supports food startups. Henry became chef at KitchenTown Café, where his brand, number5kitchen, was born.

Henry’s two-year venture at KitchenTown delivered valuable hands-on experience in running a restaurant business. “It was like having my own restaurant without the financial investment,” he says. “One of the things I most valued was being able to bounce ideas off of others, including chefs, food experts and the owner. I remember one American-Indian woman made the most unique cilantro sauce that I used with my dishes.”

While at KitchenTown, Henry learned about an ideal retail space becoming available in downtown San Carlos. After nine months of preparation, number5kitchen opened its doors in February 2019. Carly did all the design, creating a space that is aesthetically pleasing with a simple, modern touch. As for the meaning behind the name, Henry wanted something that represented his family, so he looked to his name and heritage. The Chinese character of his last name is also the character for the number 5.

Creating number5kitchen’s ever-evolving menu starts with shopping. While other chefs might build a menu and then procure their ingredients, Henry reverses the process. After selecting what’s seasonal and fresh, he fine-tunes the menu accordingly. Henry sources his product from three places: the local farmers market, wholesale and directly from a few small farms. As he thinks about what goes into each dish, Henry explains, “I prefer to limit the ingredients to no more than five per plate. The simplicity of cooking is what I like best.” 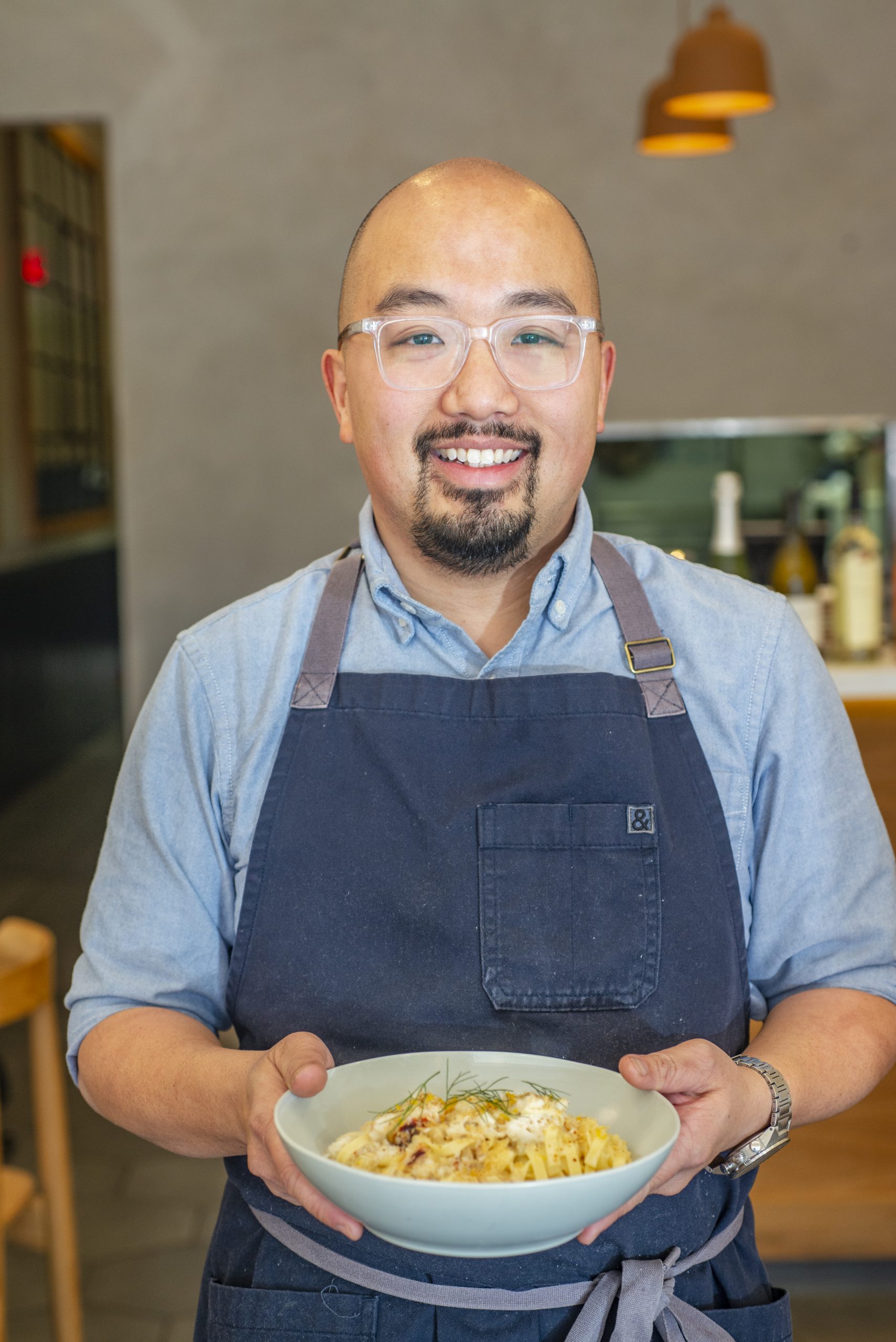 On a typical Saturday morning, Henry begins his day at the College of San Mateo Farmers Market. Not only there to buy, he likes to explore. He then heads back to San Carlos to prepare brunch. While his trained chef prepares the main dishes, Henry tastes each and creates the sauces himself. When the doors open, you will find Henry serving as host, waiter, bartender, barista, et al. After brunch, it is time to prepare for dinner. He typically calls it a day around 10PM.

Sampling number5kitchen’s seasonal menu, the food is light, flavorful and plated with an artful touch. In another nod to Henry’s Chinese heritage, he wields chopsticks to precisely place each dish’s delicate garnishes. With the first bite of number5kitchen’s popular crab pasta, each ingredient pops—the freshness and quality of the crab, the silkiness of the burrata cheese, the zest of the backyard lemon, the crunch of the breadcrumbs, the flair of the fennel and the kick of pepper. The turmeric fried chicken beckons with a delightful crispness to the skin and is flavorfully served on a bed of cilantro chili yogurt, with a side of herb salad and turmeric rice. House-cured sardines are fresh from Monterey and paired with organic egg, potato and pea shoots, drizzled with a citrus vinaigrette. “Fresh, seasonal food is the only way we should be eating,” Henry says, gesturing to the dishes.

With a business philosophy of touching people’s hearts, Henry’s biggest reward is seeing people smile after eating at his restaurant—and return customers, of course.

As spring begins to make its appearance, you can expect to see touches of asparagus, peas, fava beans, spring onion and garlic on the menu. Walking through the aisles of the farmers market to procure the freshest ingredients, Henry is clearly channeling his grandaunt as he creates number5kitchen magic.