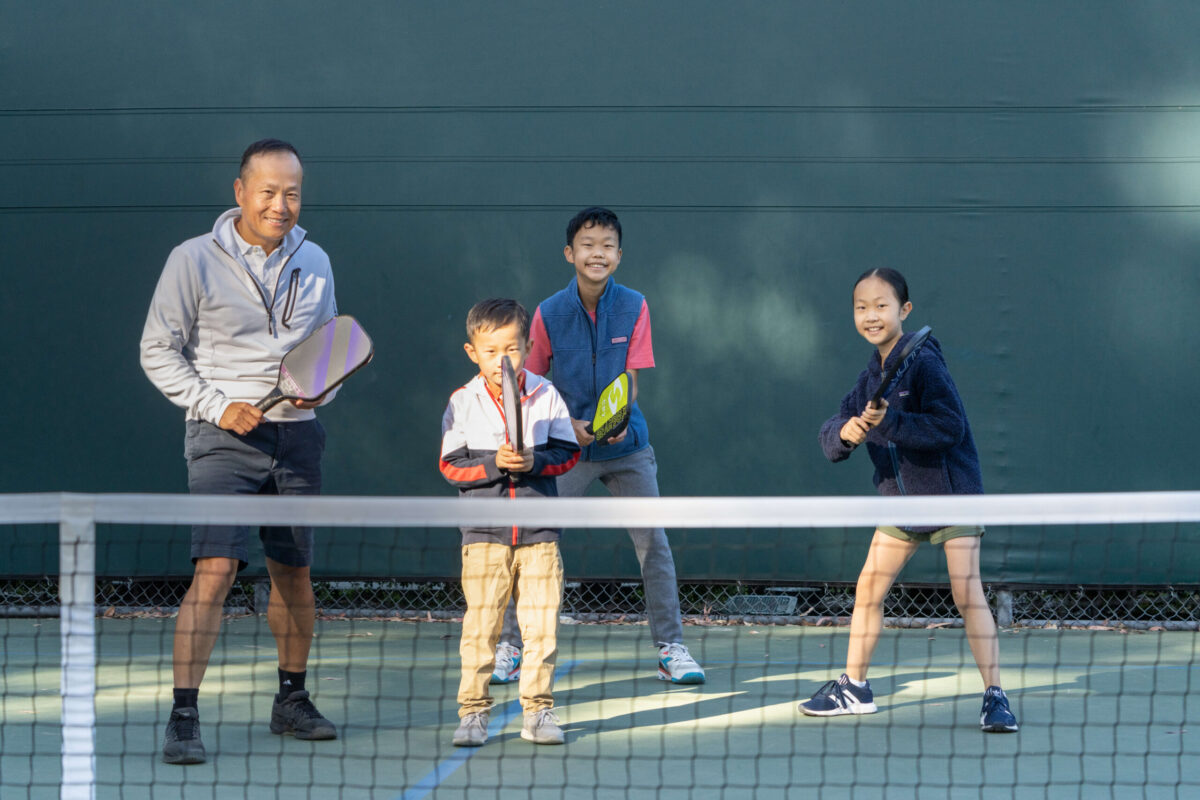 First off, pickles have nothing to do with it.

“It’s a silly name but it’s a fantastic game that everyone can play,” says Monica Engel Williams, a self-proclaimed pickleball addict and official ambassador for the fastest growing sport in the U.S.

A mash-up of tennis, badminton and ping-pong, all pickleball requires is a paddle and a plastic whiffle-like ball. Played as singles and more commonly doubles on a 20’ x 44’ court—the same size as badminton, with a net in the middle—four pickleball courts can fit into the space of a tennis court.

What’s with the giggle-inducing nomenclature? As pickleball lore tells it, the game was invented in the summer of 1965 by three dads on Bainbridge Island near Seattle, as a way to entertain their collective gaggle of bored children. Apparently, a family pet factored into the mix—a dog named Pickles, who would chase the ball and run off with it. As the game evolved and required a name, “What the hell, let’s just call it pickleball,” was reportedly the winning sentiment. 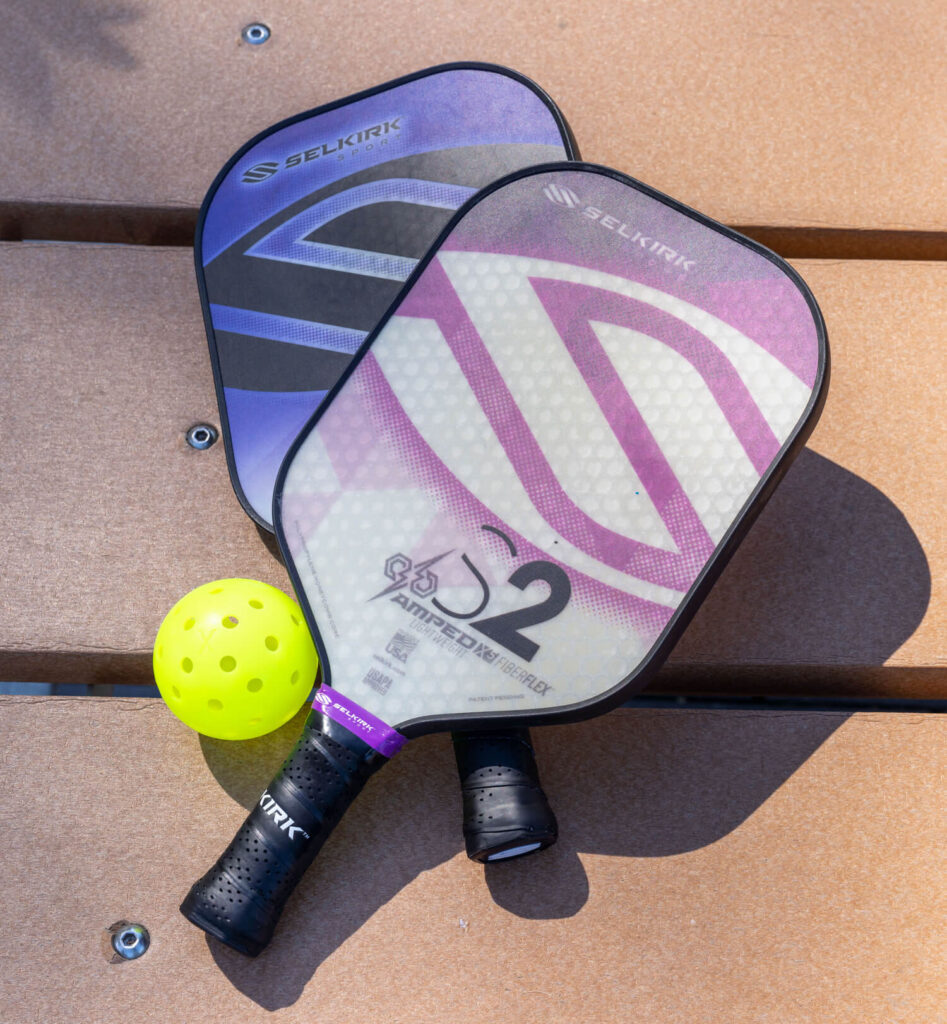 On a Tuesday morning at Mitchell Park in Palo Alto, Mark Sue is grateful he has nearby pickleball courts to divert his own three children, ages 14, 10 and 6. Mark discovered pickleball a year ago and now counts regular games as part of the family’s routine. “Anyone at any level can get started and have fun,” comments Mark, as he packs up paddles and balls. “It’s a very active sport, which is good when you have three crazy kids at home.”

As Mark dashes off with his young crew, Bob Morgan from Los Altos Hills is just arriving, flanked by Kona, a Lab-mix who sports a “Pickleball Support Dog” harness. In his early 80s, Bob warmly greets the slew of players mingling and warming up, who grin at the sight of his graphic t-shirt. “If it wasn’t for pickleball,” it reads, “I wouldn’t have met you and you and you and you and you and you.”

For nearly everyone playing at Mitchell Park, the first “you” in that statement is a nod to Monica, the universally acknowledged Peninsula pickleball queen. “Pickleball is low-impact, easy to learn and very social,” Monica says. “My purpose in life now is getting as many people playing pickleball as possible.” 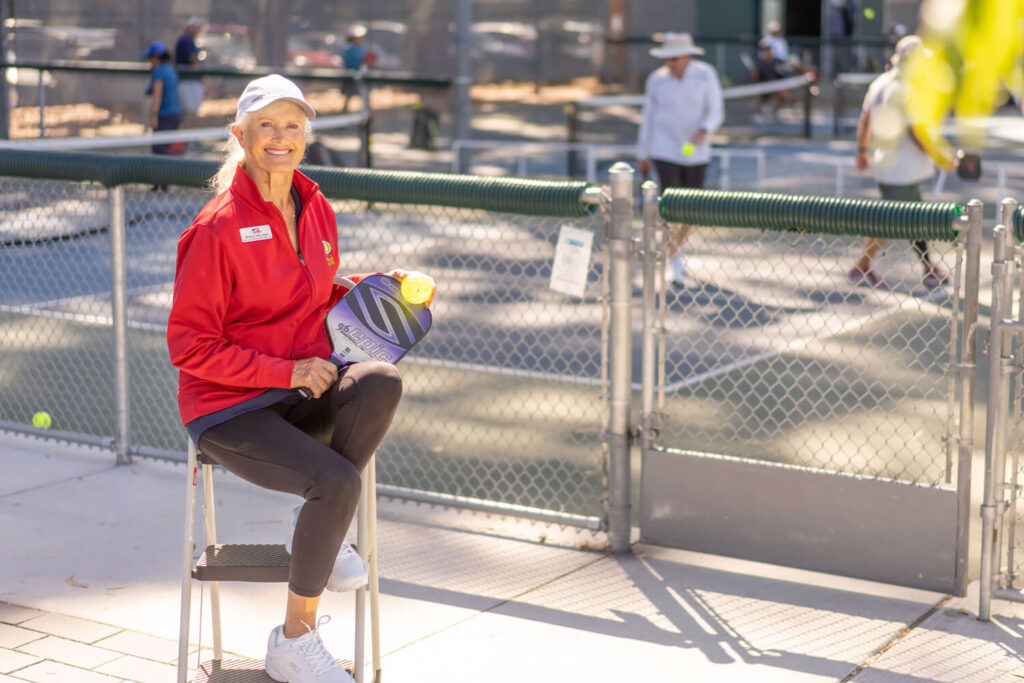 Originally from near Manchester, England, Monica arrived in the Bay Area as an au pair in the ’60s—and later worked in PR, banking and real estate. A lifelong athlete, starting with track and including 50 years of tennis, Monica discovered pickleball in 2013, while she and her husband were visiting another couple in Arizona. “Oh my gosh, I couldn’t get off the court,” she gushes. “I loved it so much.”

When Monica returned home to the Peninsula, she immediately looked for local places to play. When she couldn’t find a pickleball court, she found a new mission.

After learning about the USA Pickleball Ambassador Program, Monica signed on as a tireless local promoter of the burgeoning sport. She connected with a group of former paddle tennis players and started playing pickleball on Mitchell Park’s two paddle tennis courts. “People would walk past and ask, ‘What’s this?’ and I’d say, ‘Here’s a paddle. Come and try it,’” she recounts. “More and more people came and eventually we had 50 people.” 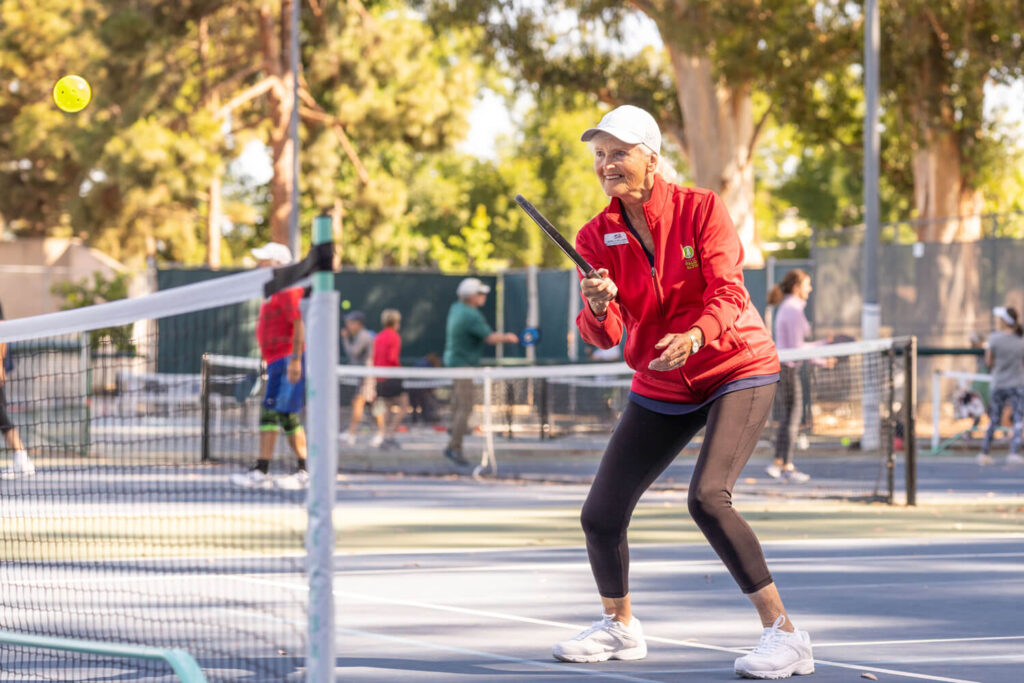 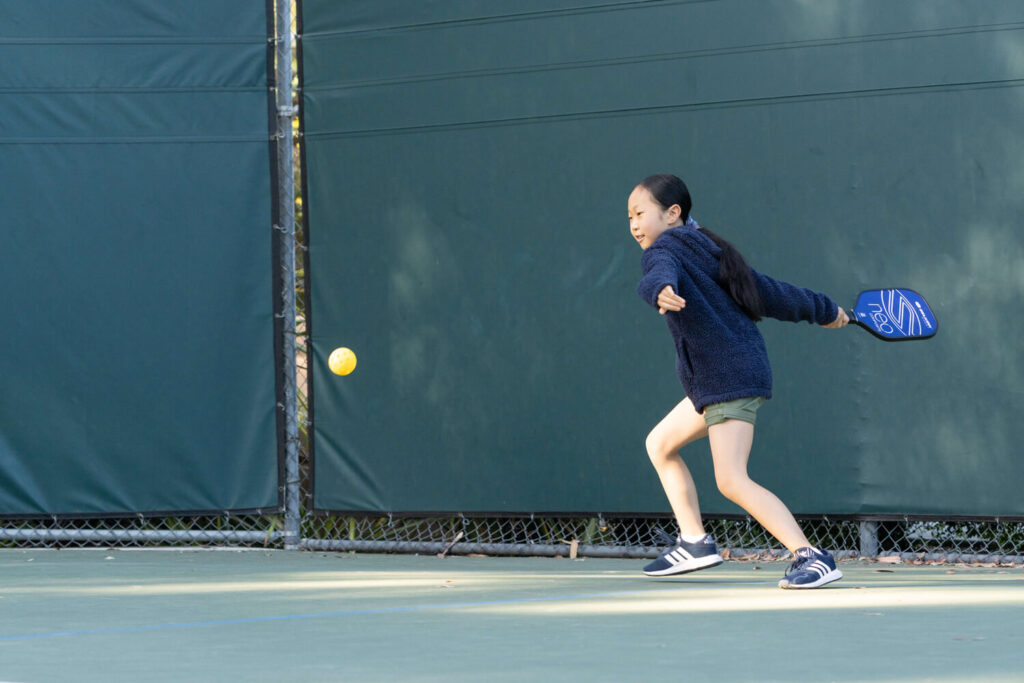 For Monica, spreading the gospel of pickleball—one new player at a time—is a joyful calling. “The main thing is safety,” she instructs first-timers on the court. “Don’t move your feet back or shuffle back because it’s easy to stumble. And when you’re learning, don’t lunge for a ball that’s out of reach. Just let it go—it doesn’t matter.”

When she’s giving lessons (“I’ve taught ages 5 to 93!”), Monica runs through the pickleball basics—rules, strokes, scoring and serving, which entails a below-the-waist underhanded arc. However, Monica is especially enthusiastic about a newly-introduced drop technique. “It’s a brand-new serve,” she shares. “It’s just a trial for now, but I think it’s a lot easier for players to learn.”

Monica emphasizes two unique features of the game: the two-bounce rule and the non-volley zone, also known as “the kitchen,” which extends seven feet from the net. “There’s a pickleball saying, ‘Stay out of the kitchen,’” explains Monica. “Actually, you may step into the kitchen, but you can’t volley the ball when you are in the kitchen—the ball has to bounce there first.”

Demonstrating her preferred grip—holding the paddle like a hammer or a handshake—Monica also talks through the importance of a good “dink” shot. “It’s just a soft touch, a push or a lift,” she motions. “In pickleball, a soft shot is more powerful than the power shot. Pickleball is more about placement than power—it’s a game of finesse.”

Once the essentials are outlined, it’s time for a game. “The quickest way to learn is just to play,” Monica firmly believes. And playing games also fuels the social aspect of the sport. “Pickleball is so popular because you don’t have to make arrangements ahead of time,” she says. “You just come to the court and rotate into a game. Everybody is welcoming. It’s the pickleball way to be inclusive.” 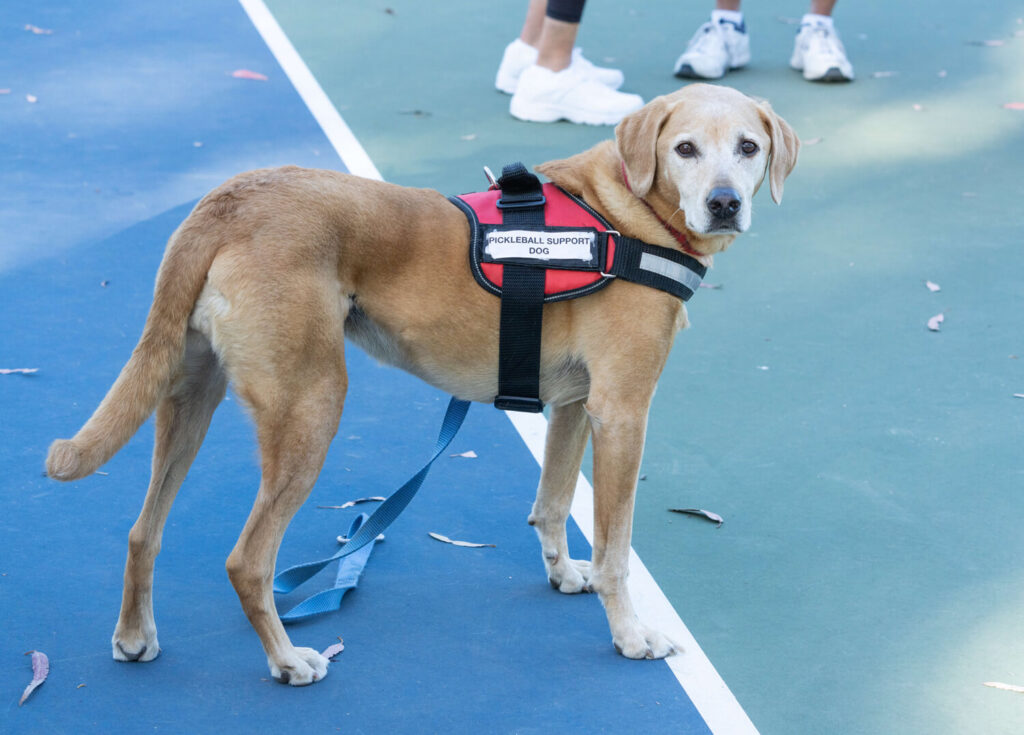 At 79 years old, Monica says she has a hard time comprehending the impact of such a silly-sounding sport. “Life for me, started with pickleball,” she reflects. “I wake up every morning and feel like it’s my birthday. I have a pickleball game—it’s like always having friends waiting on the playground for you.”

During a break from the action, she sits on a park bench situated just outside the courts. ”MONICA WILLIAMS THANK YOU FOR CREATING A PICKLEBALL COMMUNITY IN PALO ALTO” reads the 2019 honorary plaque affixed to the back of the seat. Chuckling, Monica glances at the tribute and quips, “And I’m not even dead!”

As if to prove her point, Monica reaches into her bag and pulls out the silver medal she won at the Pickleball Nationals at Indian Wells in 2018. “I’m so proud of this,” she beams, before lamenting that she was beaten by… an 80-year-old. “I can’t wait to go back,” she says, with a determined gleam of gold in her eye.