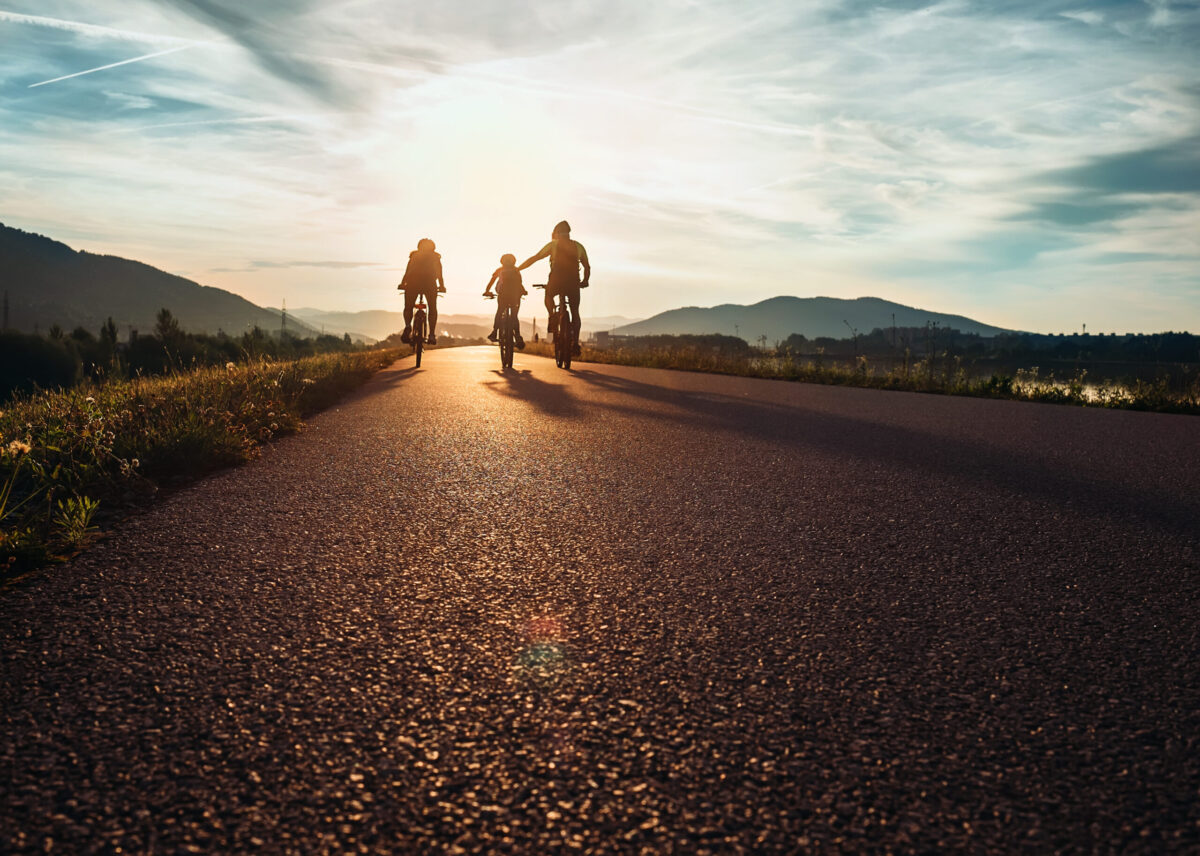 San Francisco Bay water gently laps against the Peninsula’s shoreline. Life teems in these wetlands. Snowy egrets loom tall over scurrying black-bellied plovers as both bird species poke between grasses and mud for crustacean snacks. The Palo Alto Baylands is just one destination in the Bay Trail’s network of relatively flat gravel roads providing recreational access to 500 miles of shoreline around the San Francisco Bay, perfect conditions for a bike ride.

As you pedal over bumpy shore-hugging roads, feel the reverberation of the gravel, hear it grind and crunch under your wheels, become immersed in the journey. Riding a bike, you’ll cover more ground than you would by foot and in more detail than you would by car.

“When you’re on a bike, you experience the world through all of your senses,” says Jeff Selzer, general manager of Palo Alto Bicycles and E-Bike Annex. “That little butterfly flies right alongside you for a few hundred yards—you get to look at it and you see it. Whether you’re six or sixty-six, you can get out there and enjoy the experience.”

Jeff has biked much of California, several U.S. states and in countries around the world. Weather, road safety and the variety of landscapes found on the Peninsula set it apart from all other cycling destinations. “This truly is a cycling nirvana,” he says.

When Jeff attended college in San Luis Obispo, he biked gorgeous coastal routes but says it became monotonous. “Here, we’ve got a lot more diversity,” he enthusiastically points out. “We can ride over the Dumbarton Bridge or bike the Baylands. You can ride up to Mt. Diablo, ride over Mt. Hamilton and back down or you can stay on this side and go over Skyline and out to Half Moon Bay or to San Francisco and back or out to Santa Cruz. It’s just a widely diverse and beautiful place to ride.”

Even-keeled sheltered shoreline and the rise and fall of Santa Cruz Mountains’ winding passes illustrate the range of cycling routes available on the Peninsula. Beginners to elite athletes can find routes to suit their needs, whether looking for a physical challenge or a leisurely scenic ride. Jeff notes that often, “You can do both of those starting from the exact same spot” on the Peninsula. “The diversity of terrain, the diversity of access to a safe road to ride on, is almost unparalleled.”

Back when Palo Alto Bicycles opened in 1930, bikes were an integral mode of transportation. Bikes facilitated kids getting to and from school, delivery people moving goods and the general population’s mobility during WWII under gas and rubber rationing. Jeff attests that the way people use the bike has changed over the years as dirt roads have become paved, and heavy bike frames have become sleek and lightweight. These improvements opened up cycling routes to the Pacific Coast that wouldn’t have been attempted in the ’30s and ’40s. And while people still commute on their bikes, riding is more commonly viewed as a recreational experience.

That’s especially true now, given the constraints and restrictions on other activities and hobbies. Rainer Zaechelein, owner of Menlo Velo Bicycles in Menlo Park, is seeing all kinds of cyclists come in—new and veteran riders and both road and mountain aficionados. “It literally took a pandemic to get more people on bikes,” says Rainer. “The industry has been trying for more than 20 years to accomplish this. The exciting part is that we are seeing a huge increase in new customers who want to get out of the house and enjoy time with the family and people who don’t feel comfortable with public transportation, riding their bikes instead to get from point A to point B.”

Thankfully, safer road conditions for bike riders and the arrival of well-engineered e-bikes have opened up road cycling to a wider population. For example, Jeff cites SUVs being left in the garage as more families hit the road on bikes, even investing in e-bikes with a trailer. “They’re not getting into a car. They’re loving the fact that they are outside,” Jeff says. “It’s fresh air for them; it’s fresh air for the kids. We’re starting to see a societal change with how people are viewing and using the bicycle.”

Three young kids in tow? No problem. That’s where the e-bike comes in. With the added assist, it’s possible to pull greater weight and travel further distances than would be conceivable on a regular bike. And, Jeff is quick to assure, riding an e-bike is not cheating. “Ninety-five percent of the e-bikes I sell, the only way the electric motor kicks in is if you push down on the pedal. You have to actively be engaged in the activity of cycling in order for it to work.”

If it’s been a while since the last time you rode a bike, there are a few things to keep in mind when getting back out on the road. The first, Jeff says, “You’re going to be sore. It’s a new activity.” Just like any other physical activity you take up, you have to give your body time to acclimate to the movement. The second thing to remember is when sharing the road with cars, “Assume that you are invisible.” Make sure drivers see you at intersections, and you see them before you go through, even if you have the right of way

Silicon Valley Bicycle Coalition
bikesiliconvalley.org
Get plugged into the Peninsula cycling community with a free family biking guide and tips for popular routes and where to ride in Silicon Valley.