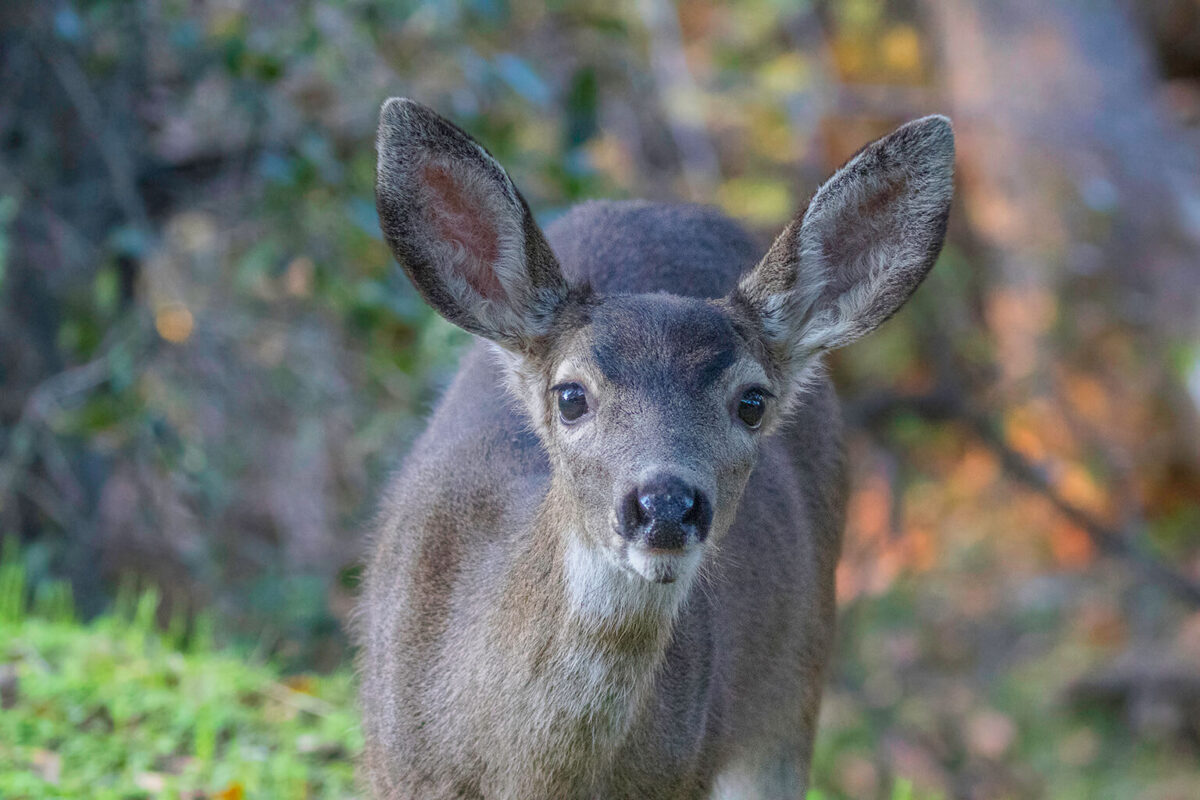 Every now and then, when I am out in nature, I lock eyes with a wild creature. Of course, these experiences are not what they seem. Animals see, perceive and think about the world very differently than humans. Even knowing this, such moments are quite magical and awe-inspiring. And I greatly value these face-to-face encounters.

Mule deer (Odocoileus hemionus) are common on the Peninsula, and they have become habituated to humans. Though still wary, they can be approached with slow, non-threatening movements. Clearly watchful of the photographer, deer and other grazers have eyes that point sideways, so they are aware of possible threats in a wide field of view. 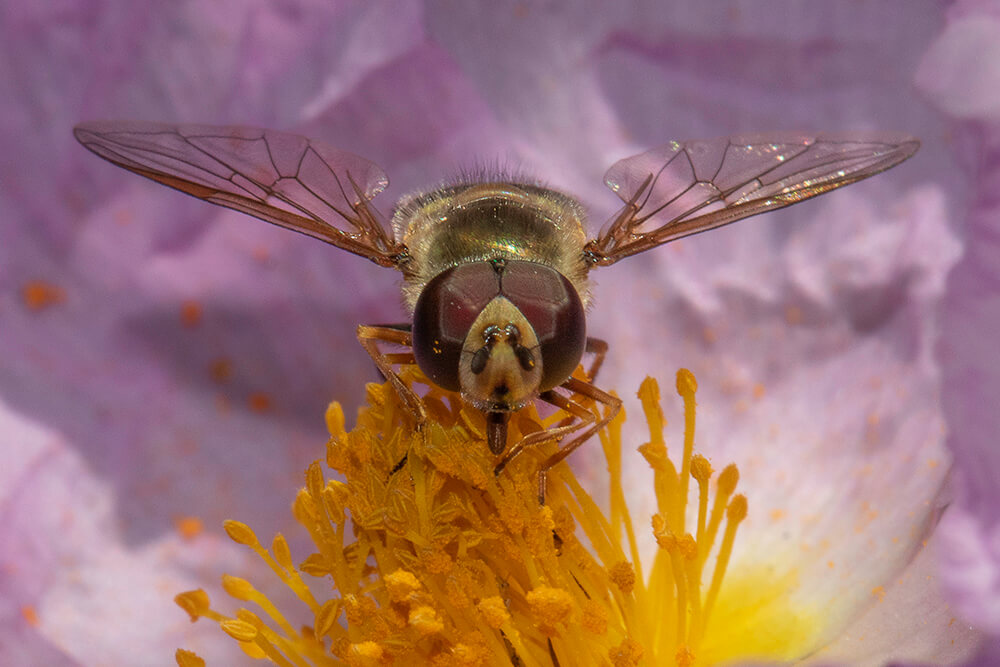 Most people identify this as a bee of some sort. It is actually a type of flower fly or more generally, a hoverfly. I first became aware of hoverflies from a student presentation in my “Photographing Nature” class. As one might expect, they are notable for their hovering in midair—often a few feet from where we are walking. They are quite ubiquitous around the Peninsula and beyond. 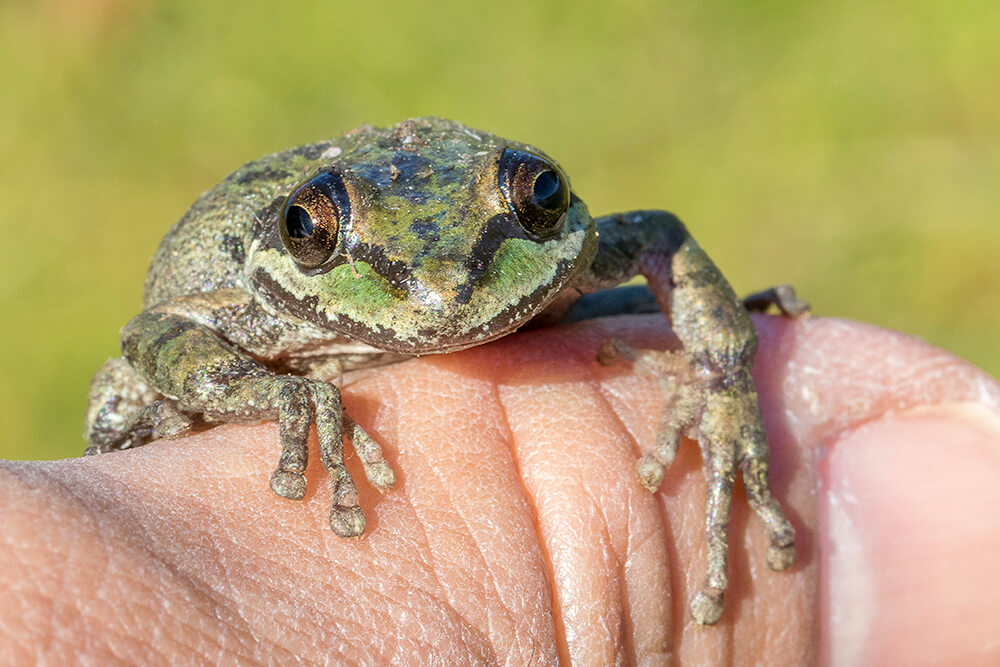 The Sierran tree frog or chorus frog (Pseudacris sierra) comes in a variety of colors and inhabits a wide range of elevations from sea level to 10,000 feet in the Sierra. Also true to its name, this is the frog that is often heard on the Peninsula. However, it falls silent when people approach, so it is most easily located by sight. To find them, it helps to think about where a frog might like to hang out. 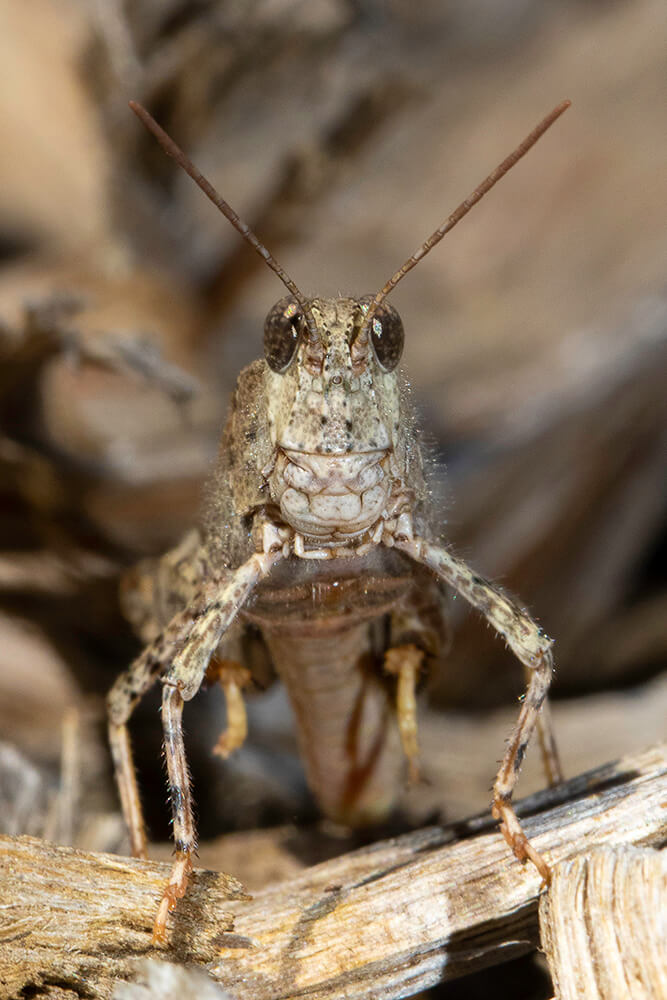 The pallid-winged grasshopper (Trimerotropis pallidipennis) is a master of camouflage. Grasshoppers are generally sensitive to movement. We most often notice them when they jump or fly. By approaching slowly, low to the ground, I can often get a few inches away with my macro lens or even with a phone camera. 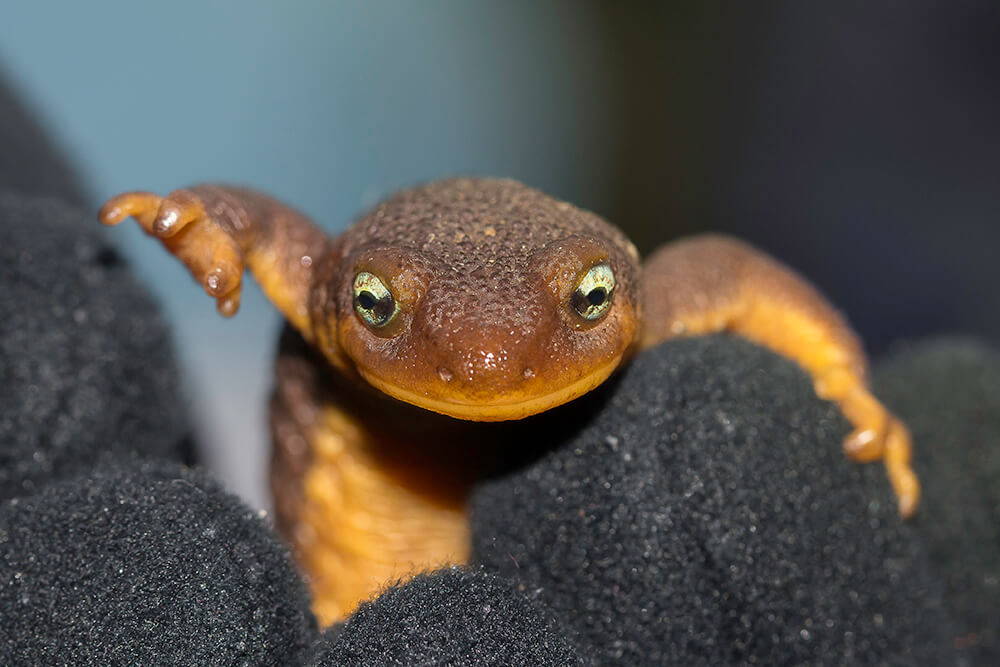 California newts are conspicuous, slow and clumsy, often stumbling over small bumps in the terrain. They appear to be quite vulnerable, but they have a secret weapon. They are among the most poisonous of creatures (when ingested) with a potent neurotoxin called tetrodotoxin—best known as the poison in pufferfish. If threatened, rough-skinned newts show off their orange bellies to warn would-be predators. 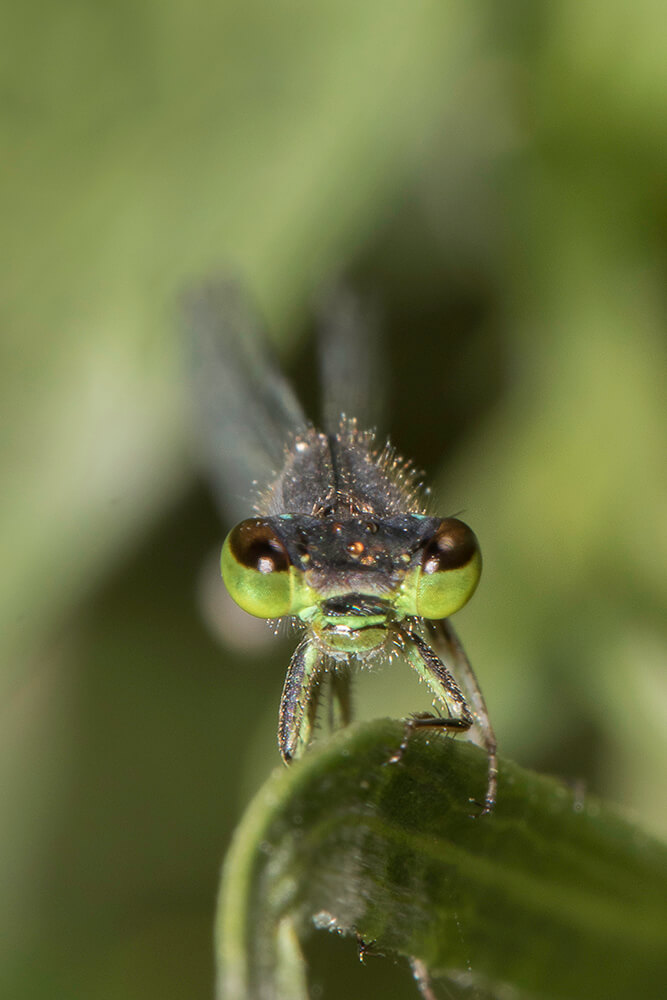 Insect eyes, like of this Pacific forktail damselfly (Ischnura cervula), evolved very differently from human and other vertebrate eyes. With faceted compound eyes composed of smaller, independent visual units called ommatidia, their kaleidoscopic view of the photographer must be quite distinct from what we are seeing. 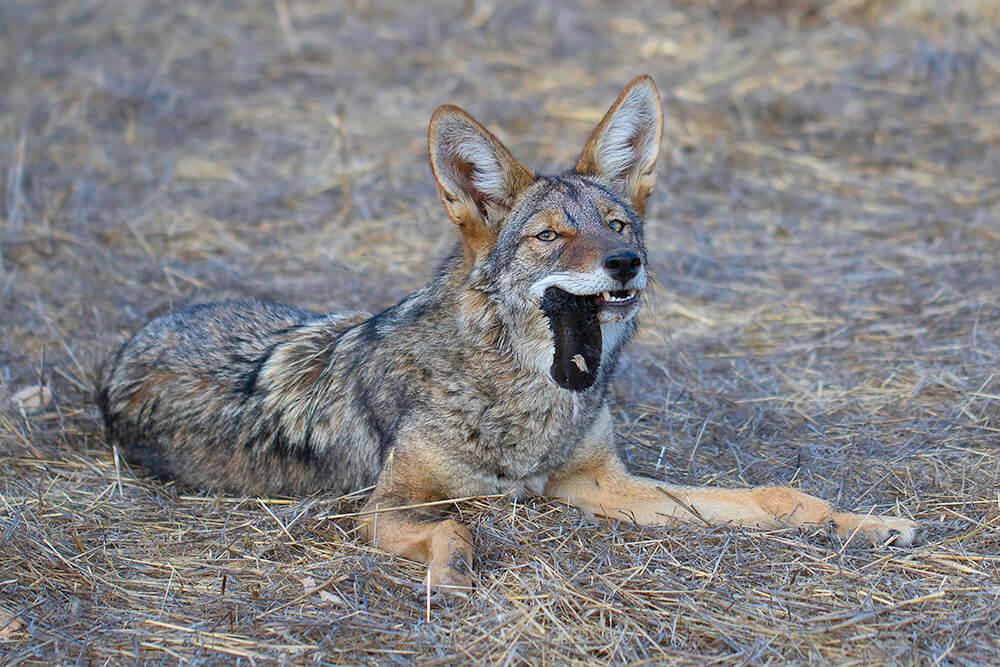 Coyotes (Canis latrans) are common on the Peninsula in parks and open spaces and they will also wander through the suburbs in search of food. This coyote, near the Stanford Knoll, is proudly showing off breakfast. A close relative of domestic dogs (Canis familiaris), coyotes and other predators have eyes that focus ahead. But unlike humans, coyotes and other canids lack color vision and rely on smell to augment their view of the world. 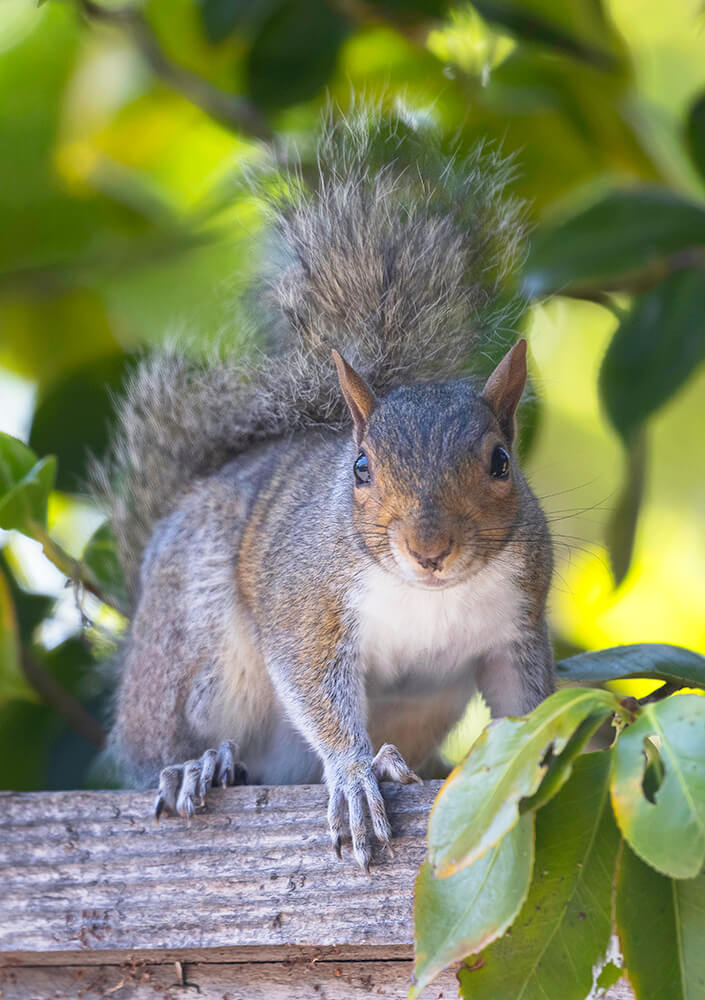 Eastern gray squirrels (Sciurus carolinensis), including the black melanistic variant, are successful invaders that have displaced many local tree squirrel species. Like deer, squirrel eyes are oriented to the side. Though squirrels will often pose for photos, they will quickly scurry away when the photographer intrudes on their safety zone. 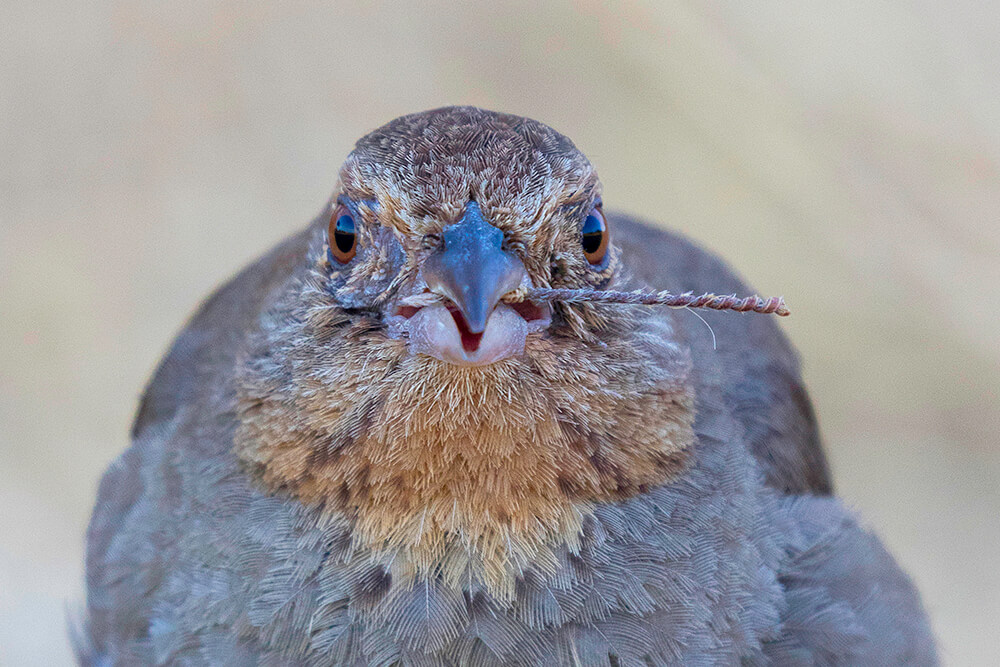 My remarkable encounter with this California towhee (Melozone crissalis) lasted for more than five minutes and was part of my motivation for selecting this Face to Face theme. Although the California towhee is disparagingly referred to as an LBJ (little brown jobbie), my experience left me with a new appreciation for the personality and subtle beauty of these birds. 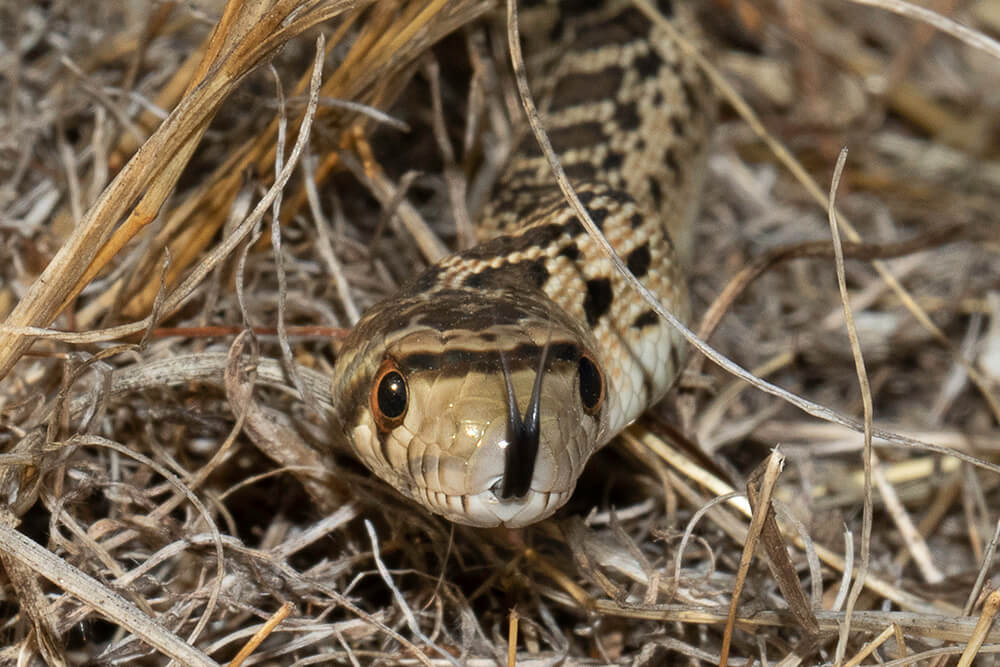 The Pacific gopher snake (Pituophis catenifer) is a large non-venomous snake with adults reaching 4-5 feet or longer. Their size, coloration and even a tendency to raise and shake their tails may give a hiker pause. While the protruding forked tongue may look ominous, it is actually a powerful chemosensory tool that the snake is using to smell the environment.