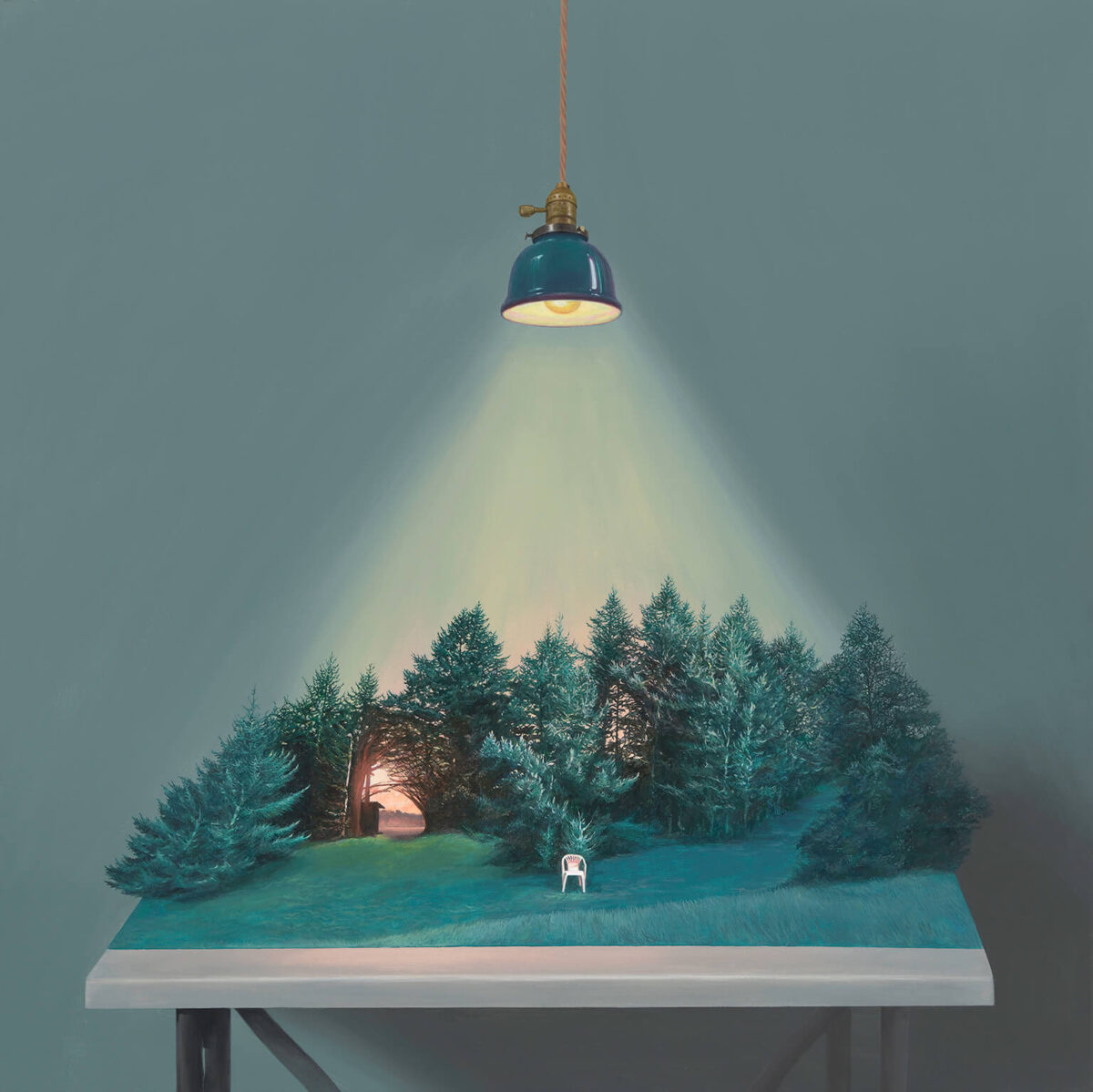 Ever experienced waking moments that feel like you’re walking through a dream? Palo Alto painter Sammy Koh (known to her more than 13,000 Instagram followers as colorstory_sammy) captures ephemeral moments through hyperrealistic dreamscapes. Justly so, considering her tendency to paint from midnight to morning.

“No one needs me,” Sammy explains of her nocturnal sessions. An attentive mother, she dedicates daylight hours to cooking and chauffeur duties. But at night, it’s just her and the canvas. (There’s always time for a nap after breakfast and dinner to keep her going.)

The “Mom” coffee mug, full of paintbrushes in the home studio, should be another hint that the artist’s paintings are a family affair. Sammy’s father fueled her love of nature with trips to the forest-covered mountains near Seoul. Sammy’s son, a fan of her style, is planning to print her paintings on clothing. And when Sammy scouts for painting inspiration, her daughter often joins, camera in hand. “It was always my daughter with me,” Sammy fondly shares. 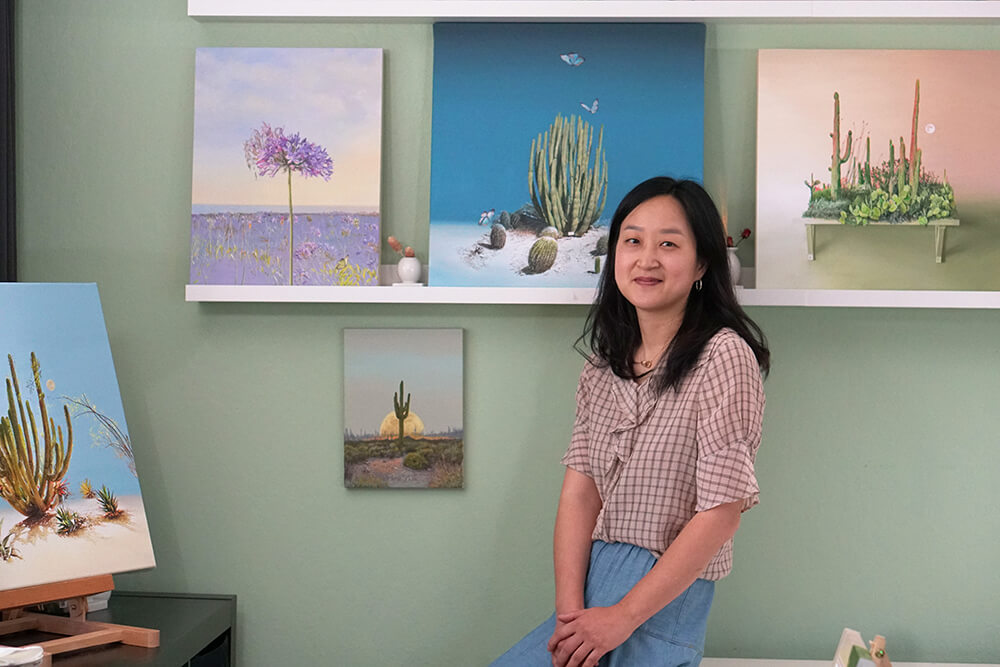 As mother and daughter wander Peninsula neighborhoods and beyond to capture surreal landscape scenes, they chase the rising sun. The artist prefers pre-dawn outings to sunset excursions. “There are many people on the street,” she says of the evenings, “but in the morning, it’s just you—alone. It’s more like a dream.” And wandering around in the dark and the stillness makes for an ethereal experience. “You have to arrive one hour before if it’s a place you’ve never been before,” she remarks. “You have to prepare. It’s only a 30-minute moment.”

Another reason Sammy loves this time of day are the colors claiming the horizon. Often, she juxtaposes splashes of pink with darker shades of teal—the color of trees still cloaked by nighttime. Romantic yet anchored somehow. “I would like people to experience peaceful moments through my paintings,” she shares.

Another dream-like motif is the moon, which ranges in size from the smallest of specks (as if captured through the viewfinder of a camera) to large and looming behind a desert cactus. Window reflections and shadows are also her muses, providing subtle glimpses into other places. Easily missed at first glance, they evoke the feeling you get when you comprehend that you’re not awake, the idea only beginning to form at the back of your brain. 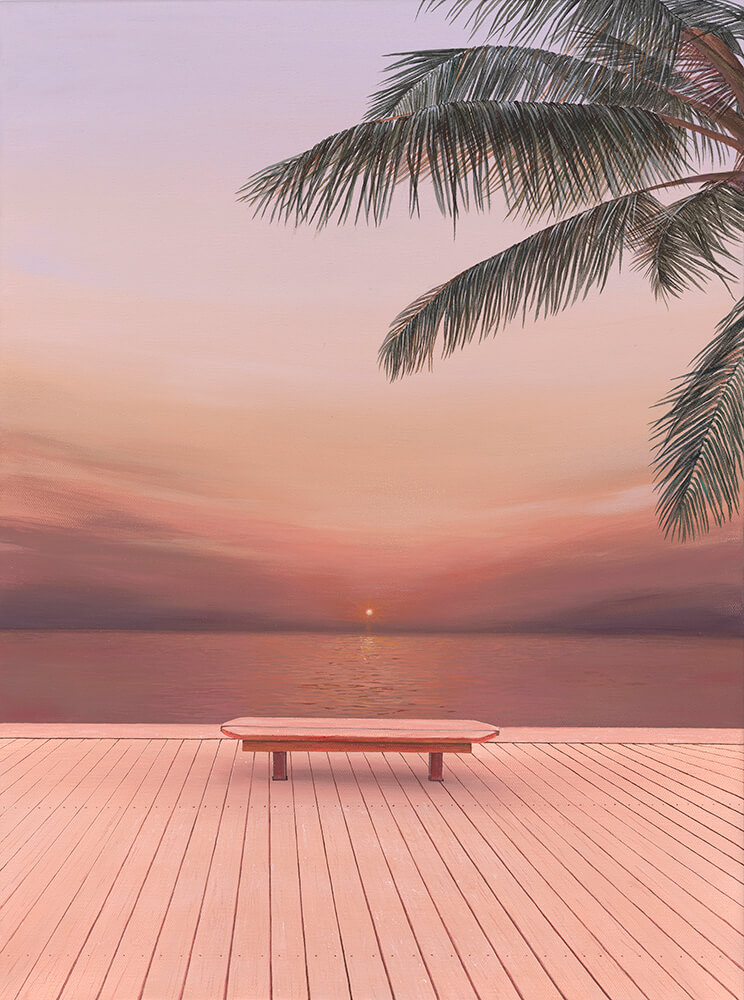 Something else sets Sammy apart. The miniscule brushstrokes of this painstakingly-detailed artist often get her work mistaken as photographs. One cactus could take her up to 10 hours. Why this meticulousness? “Because I can,” Sammy laughs. “I like the process,” she adds. “It’s like a meditation.”

Sammy’s journey in paint began at the age of 10, after which she picked up a variety of techniques at Seoul’s prestigious Sun-wha Art High School. Following college studies in graphic design, she worked as a children’s book illustrator before moving with her family from South Korea to California in 2009.

After offering a portrait painting class, Sammy realized her affinity for landscapes when students asked to explore a more scenic focus. Still, she finds herself drawn to places touched by humanity rather than purely wild terrain. “I want to show nature where people can go,” she explains. “I don’t like nature people can’t reach—I can’t connect with it.” It’s that need for connection that also attracts her to painting houses. “People live there,” she observes, “so it’s meaningful.”

When the pandemic temporarily halted Sammy’s classes, she and her paintbrush were left to their own devices. “I had time to focus on my artwork,” she notes with a smile. Soon, she began capturing neighborhoods around Mountain View and Palo Alto—a church on Waverly Street, a lamp on California Avenue—as well as more natural settings. “It’s beautiful by the Bay,” relays Sammy, who loves a wide-open horizon, especially when accented by a solitary tree.

With her newfound free time, Sammy flourished. In addition to attracting the attention of several art publications, Sammy was featured in a group exhibition at Palo Alto Art Center. Her landscapes earned her a solo show at the Korean Consulate General in San Francisco, along with an upcoming one at Art Mora in New Jersey. 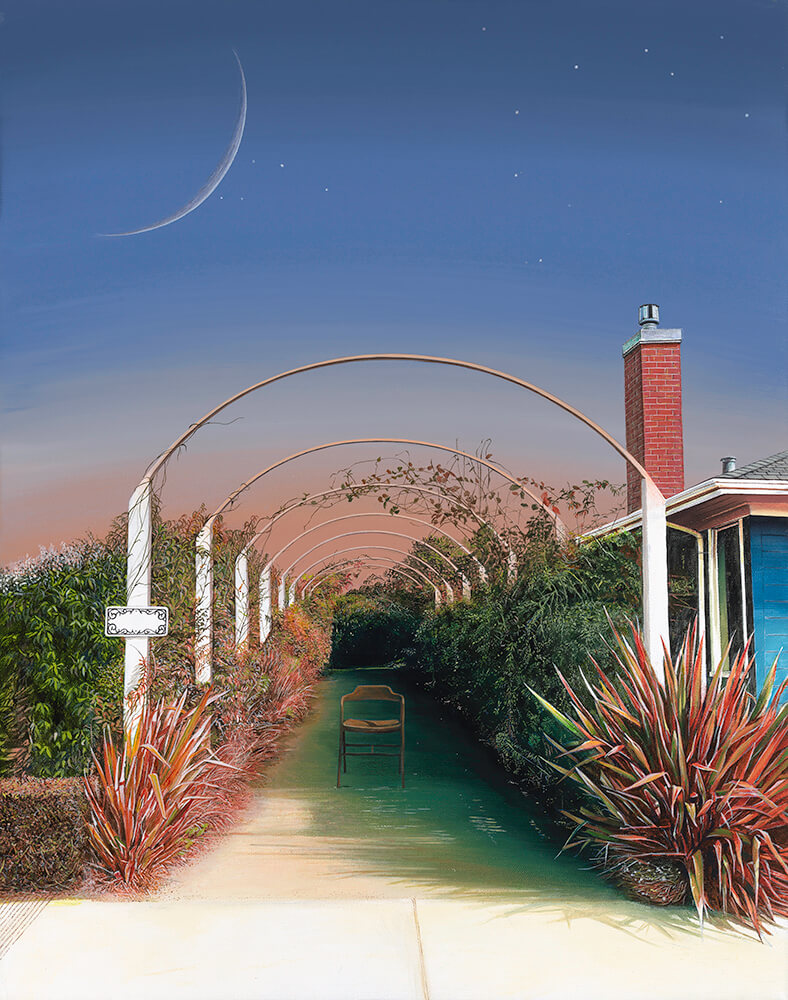 As Sammy continues to hone her style, her work has become increasingly introspective. Her landscapes are in some ways less realistic than they once were—but in a way they ruminate not only on place, but on the idea of memory. “At the beginning, I was a little shy… so I wanted to talk about nature being beautiful,” she ventures. “I said that. Now I want to talk about me more.”

She motions at a painting of trees rooted to a tabletop. “I’m remembering a forest in my life,” she describes. The table (and indoor spaces more generally) represents daily life as well as her internal self as she shelves memories of each trip. “Sometimes I make a bright light to highlight the moment,” she adds, gesturing at the painted pendant lamp illuminating the scene from above. Next, Sammy calls attention to a painting of a cactus. It’s rooted on a bed with tousled sheets, representing a drowsy, quiet morning of self-reflection after the artist returned from Palm Springs. “I think of the trip the morning after in bed,” she explains.

Speaking of sweet remembrances… Sammy gives a mischievous grin as she reveals her stash of retired art supplies, sentimentally tucked away in a drawer. “See the dead brushes? I want to keep them!” Given that she goes through several per painting, she’s got quite the graveyard.

Today, Sammy’s classes have made a comeback. She works with immigrant mothers from Korea, a decision inspired by her own rough transition to life in a new country. “If I mix Koreans and Americans, they have to focus on how they speak,” she explains, a little apologetically. But this intentional environment allows these women the chance for fellowship and creativity in their native tongue. “It’s a healing time,” Sammy notes. 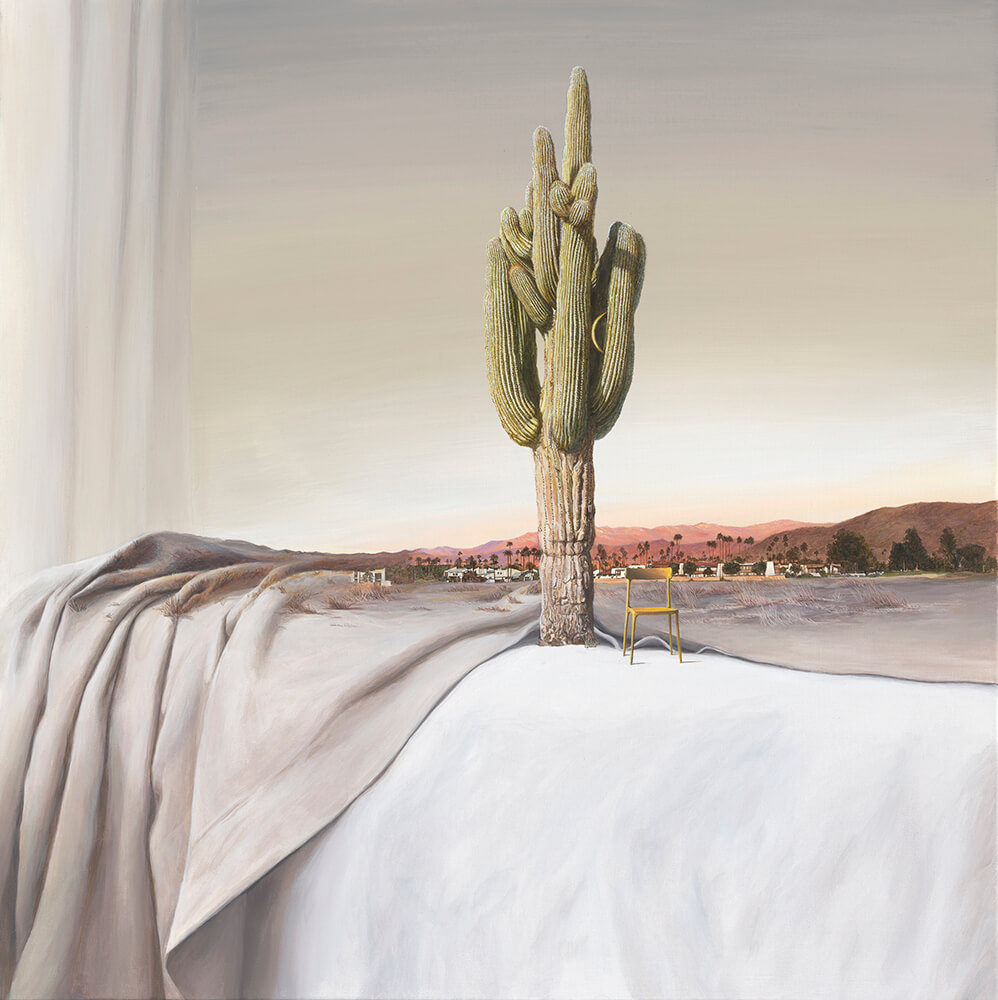 She also finds that their experiences add depth to their artwork. “They know how to endure,” Sammy states simply. “Patience is better than skill.” Additionally, she encourages these ladies to seek meaningful ways to fill their time. “Just don’t focus on only children,” she advises other mothers. “Think about after they leave.”

Sammy is readying for this season in her own life with her son attending his first year of college and her daughter on the threshold. “My husband has to travel on business trips a lot. If I’m busy, it’s better for me,” Sammy adds. “I don’t have time to be lonely! I’m busy!”

As Sammy reflects on her life’s trajectory, she recalls one of her early fantasies. “I thought, ‘Even when I’m in my eighties, a grandma, I want to be an artist.’” She’s on track to make that happen. Not only is she painting the dream, she’s living it.