Two hours before sunrise, bakery manager Oscar Pacheco switches on the lights at the Palo Alto Creamery, illuminating empty bar stools and booth seats (in that iconic ruby red of diners everywhere), before crossing the checkered floor to the silent kitchen. Don’t let the stillness of the place fool you. Beginning the day at dark o’clock (and staying late) is the only way Oscar will keep his head above water in the torrent of pie orders that rush in every Thanksgiving.

“He’s the glue,” credits Eric Beamesderfer, who oversees operations for the restaurant group behind Palo Alto Creamery, Reposado, British Bankers Club and Scratch. Even though Eric’s the numbers guy—tasked with keeping track of orders in Excel and updating the inventory—he isn’t above rolling up his sleeves.

There’s something agreeable in the way Eric and Oscar carry themselves around each other: the natural ease and understanding shared by longtime friends who’ve served in the pie-making trenches together. “I flat out tell Oscar, ‘You have two hands. Tell me what to do,’” remarks Eric.

If that’s rolling out 60 crusts or blending whipped cream at the mixer, so be it. Come the holiday season, that “all hands-on dough” mentality is the Creamery’s secret ingredient. 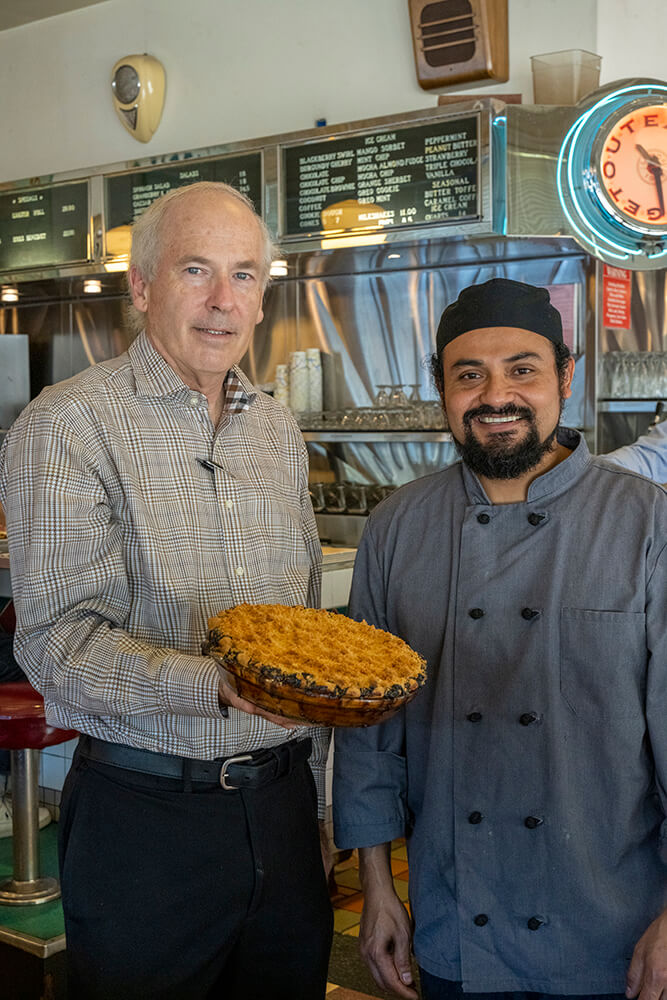 The Palo Alto Creamery, long a staple of downtown, started doling out milkshakes and burgers in 1923. “We get second and third and even fourth generations coming in now, saying, ‘My parents or grandparents or great-grandparents used to come here,’” shares Eric. Today, he wears a plaid button-up (perhaps unconsciously reminiscent of the many spreadsheets he orchestrates daily).

Rob Fischer, the diner’s owner since 1988, works under the mantra simple food done right. “We stay true to the basics here,” Eric affirms. It’s a recipe that clearly works. Since joining the team nearly a decade and a half ago, Eric has seen pie orders more than quintuple over the Thanksgiving rush. “Two years before COVID, we were just shy of a thousand,” Eric says. “And that’s a four-day stretch.”

Apple pie is by far the seasonal favorite. No skimping here, Palo Alto Creamery loads each with four pounds of Granny Smiths. Cut in large chunks and seasoned with cinnamon, the fruit is topped with a lofty golden dome of a crust. “They look impressive,” acknowledges Oscar, adding that they peel 45 or so cases of apples each season by hand.

The diner serves a slew of alternatives including pumpkin (Thanksgiving’s second bestseller), cherry, chocolate pecan, blueberry and cream. Eric’s personal favorite? “Oh, I never answer that question,” he says, as though he’s being asked to pick a favorite child.

In September, the Thanksgiving pie prep commences with an order of pie plates.

Somberly, Eric revisits the year they experienced a glass pan shortage. “The week before Thanksgiving, we were all running around to places like Bed Bath & Beyond and the outlet stores,” he recounts. Fortunately, a friendly neighborhood journalist put out a call for assistance in the local newspaper, inspiring locals to drop off dishware. Thanksgiving 2022: 2,000 pie plates. Check!

Two weeks prior to the holiday, the necessary ingredients and pie dough are stocked in the fridge. (“We don’t bake pies weeks in advance and freeze them,” Eric is quick to clarify. “It’ll be baked within 24 hours of your pickup time.”) Then, with T-Day a week away, the team doubles down for the final sprint.

A lesser baker might crumble under the avalanche of orders, but to a man like Oscar—who sees dessert as a science, an intricate process and an art—it’s “Bring it on!” time. “I tend to get a bit overwhelmed, but in a good way,” he reveals. “I know it’s only a couple days for me to give my best.” Knuckling down, he asks himself, “What needs to be prioritized? What needs to be done right now?” His plan of attack begins with pecan pies (due to their longer shelf-life), before barreling through the rest of his lengthy to-do list. “Keep in mind,” he points out, “that we’ve gotta keep up with all the production for the restaurant too.” 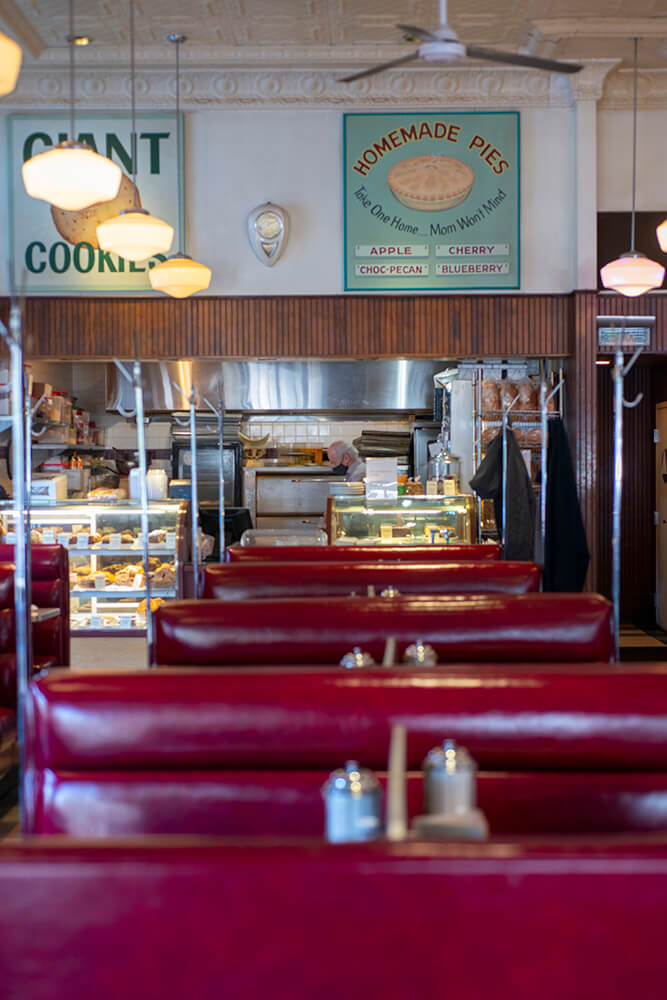 And then there are the unknown factors. Like last year when cherry pies were inexplicably popular, requiring some last-minute pivoting. Oscar adds that the diner’s display case also acts as a source of inspiration to visitors. “You get to see how majestic the apple pie looks,” he beams. “You picture it on your table with your family. And so you end up buying a pie.” Even weather creates variables, notes Eric. Like if it’s snowing in Tahoe. “If it’s a perfect ski week up there, pie sales will go down,” he explains, as regulars head for the slopes.

Fortunately for pie lovers, Oscar has a mind for details. Even his approach to the oven entails careful consideration. Pies require rotation because the crusts closest to the oven walls bake faster. Cooking the pumpkin ones too fast will crack their glossy surface. And turning the heat a little higher doesn’t mean faster pies—it means charred ones. “You have to stick to the process,” Oscar observes.

With only two ovens available, crunch time happens right after the diner’s dinner shift. But even then, only 24 pies can bake at a time. That’s when Eric taps into his broader network. “In years past,” he says, “we’ve gotten support from the other restaurants in terms of baking or doing some of the preparation.” 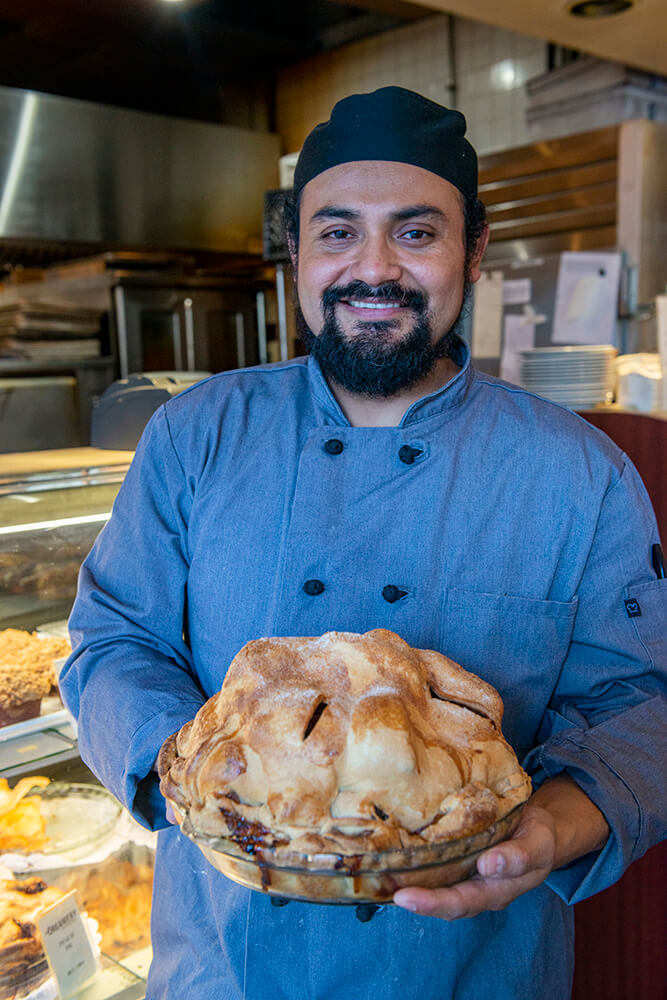 Thanksgiving Eve is a madhouse—albeit an organized one. “We’ve got all these cars full with pies, the counters are full with pies, spices everywhere,” describes Oscar. In the past, the pickup line stretched out the door and curled around the side of the building. Nowadays, the Creamery mitigates traffic by having customers pay in advance.

“I don’t know anyone—at least in my generation—that didn’t grow up with pies during the holidays,” comments Eric about this beloved Thanksgiving tradition. So let’s raise a glass (of milk) to these kitchen veterans continuing to serve up a timeless slice of Americana. “We make it happen,” notes Oscar with pride. “We always make it work.”

To guarantee your Thanksgiving dessert, pre-order by November 18. paloaltocreamery.com