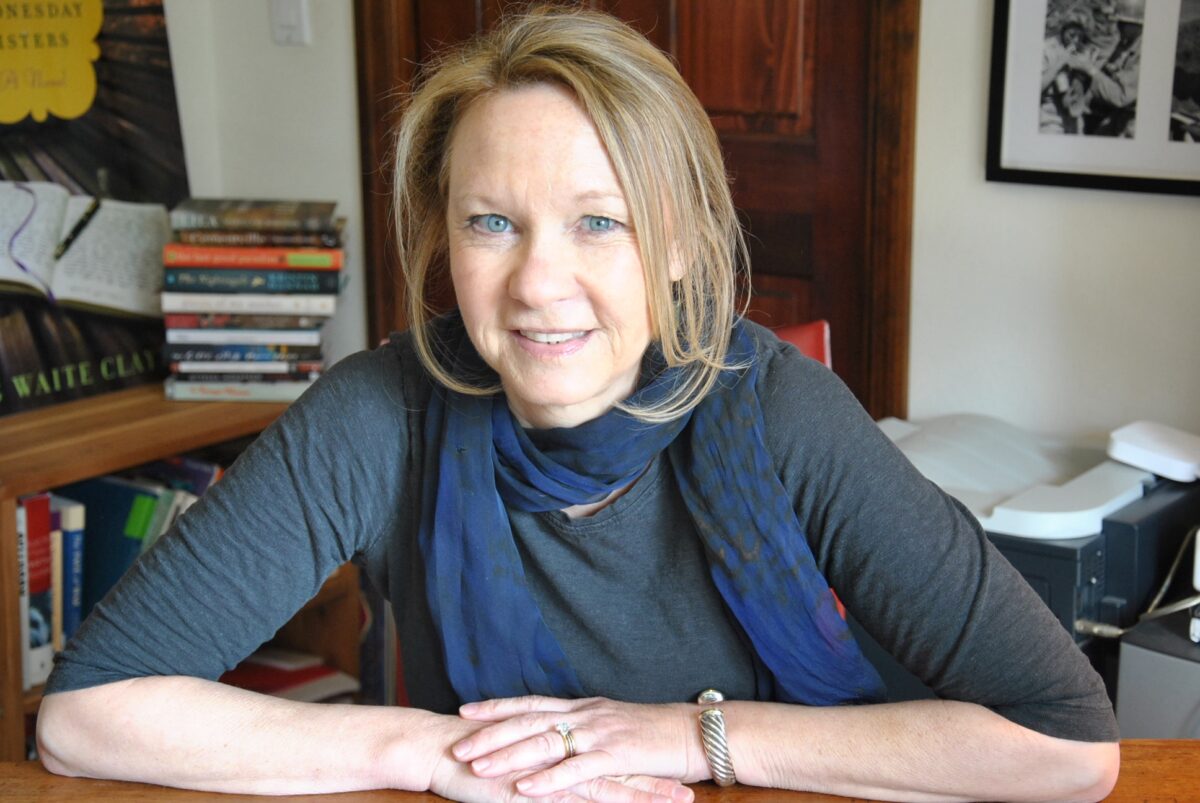 At any given point in time, she might have caught your eye in the Luxembourg Gardens in Paris. Using her propped up knees like a desk, she scribbles away in a Moleskine notebook, occasionally glancing up to see another toy boat being launched into the Grand Bassin duck pond. Or perhaps you saw her at Stanford campus, ensconced at a red outdoor table by Tressider Union, filtering out college student chatter as she thoughtfully jots down notes. Four Seasons Silicon Valley is another favorite spot. Near the fireplace in Quattro restaurant, she taps away on her laptop, pausing now and then to sip a cup of coffee.

“I write in all sorts of places in normal times,” says New York Times bestselling novelist Meg Waite Clayton. “I write in cafes, and I love to write in the sunshine out at Stanford.” In recent months, there’s a major caveat, of course: “Most of my time is now spent in my office.”

Meg is referring to a light-strewn converted bedroom in Palo Alto’s Community Center neighborhood, with views out to a back garden. Surrounded by stacks of books, family photos and personal memorabilia (ranging from a stuffed psychedelic armadillo to a 1993 marathon medal), she plies her trade at a much-beloved French reproduction cherrywood desk she bought in 1987. “I’m a very loyal person,” she acknowledges. “I’m still on my first husband after 37 years and I’m also still on my first car—a little Mercedes convertible that was vintage even when I bought it in 1985.”

In Meg’s line of sight is a corkboard peppered with dozens of 3×5 note cards—pink, green, blue and white—each bearing a scene or a chapter, her “card outline” of the novel she’s currently working on. A few months back, in a personal ceremony akin to Buckingham Palace’s Changing of the Guard,  Meg enacted the “swapping of the corkboard.” Pulling out every push pin (and corresponding card) with relish, she officially ushered out her last novel to make room for her new one. This ritual has now produced seven Meg Waite Clayton titles: The Language of Light, The Wednesday Sisters, The Four Ms. Bradwells, The Wednesday Daughters, The Race for Paris, Beautiful Exiles and The Last Train to London.

Although the protagonists of Meg’s books vary—from an immigrant female Supreme Court nominee to women journalists during World War II—her passion is the general/historical fiction genre, with a very clear, defined focus. “I write about strong women who don’t always know that they’re strong; I think of them as the women who have paved the way for all of us,” she says. “Women have done so much in the last 100 years that has not been appropriately recognized and applauded and so those are the stories that I am interested in exploring.”

Published in September 2019, The Last Train to London, the book that just came down off Meg’s corkboard, is already an international bestseller being translated into 18 languages. Based on the Kindertransport rescue of 10,000 children from Nazi-occupied Europe, at the novel’s heart is Geertruida “Truus” Wijsmuller, a Dutch-woman and real-life hero determined to save as many young lives as possible.

The story of the Kindertransport first caught Meg’s attention back in 2006, when her son Nick conducted interviews with Kindertransport survivors for a Palo Alto Children’s Theatre project. “I was very daunted by this story for a long time,” Meg reflects. “I thought it was a Jewish story that needed a Jewish writer to tell it and I grew up Roman Catholic. It wasn’t until I found Truus, who’s Christian, that I imagined that it would be my story to tell. I feel like I’m doing it for Truus and I’m so happy to have it out there and have it so well received.”

Having the confidence to tell a story, to fully deploy her talent, represents Meg’s own journey in character development. Born in Washington, D.C., Meg moved frequently with her family growing up, so books became her constant companions. Inspired by works like A Wrinkle in Time and To Kill a Mockingbird, she recalls telling her eighth grade boyfriend that she wanted to be a novelist. “And then you start getting all that real-world input and you see that nobody actually gets to be a novelist,” she says, “and so you let go of that dream and you do other things.”

In Meg’s case, that meant earning bachelor’s degrees in history and psychology, followed by a law degree, from the University of Michigan. Looking back, she realizes that her courses of study laid the perfect foundation for that inner-novelist waiting to come out. “History is what people have done and psychology is why they do it, and I’m not sure that there’s better training for a writer than those two disciplines,” she explains. Meg embraced the adrenaline rush of a legal career, but the seven years she spent practicing law didn’t fully satisfy her. “I think the art of putting together a merger agreement is not unlike the art of putting together a novel in terms of the logic that has to flow through it,” she says, “but I knew I didn’t want to die and have my gravestone say, ‘She wrote a great indenture.’”

As the chapters in Meg’s own life unfolded with moves to Los Angeles, Baltimore and Nashville, critical supporting characters were introduced—her husband, Everett “Mac” McCord Clayton, and two sons, Chris and Nick. It was while Meg was pregnant with Nick that her story arc took a shift. “I imagined becoming a writer again, and I only did that because my husband made me admit that it was something I wanted to do. He said, ‘How are you going to know if you can do it or not if you don’t give it a try?’”

Meg knew he was right. “In the crazy things you do in life,” she says, “I decided the time to start writing was when I had a two-year-old and a newborn.”

She trained herself to write “in the spaces.” After dropping her older son at preschool, Meg would glance to the back seat. “If my younger son had fallen asleep, I would pull out my manuscript and work at the steering wheel in my car.” A handful of tokens translated into writing time at Chuck E. Cheese’s, and once the school years started, she adopted a discipline she still maintains: “I write from 8AM to 2PM. That’s where it comes from; I’d drop the kids off, and then I would sit down and write—until 2PM or until 2,000 words.”

Meg completed her first novel in 1996 and then “sat back and waited to be on The New York Times Bestseller List.” That’s when she learned that writing and publishing are two very different things. “The novel didn’t sell the first time,” she says, recalling the staggering letdown. “Everybody I know who has been successful writing has a story—and that story is always how long they kept having to go at it before they got any traction.”

In 2002, Meg moved to the Bay Area with her family, and they settled into their Palo Alto home. Her first novel, The Language of Light, finally landed on the right desk and was published in 2003. For her second book, Meg found inspiration in her own aspirations, her long-standing friendships and the stimulating Peninsula culture surrounding her. “I draw on a lot of the environment here to feed my well that I write from,” she says. “One of the things I absolutely love is the density of smart, accomplished women here.”

Palo Alto’s Pardee Park. University Avenue. Stanford Hospital. Kepler’s Books. Local references abound in Meg’s second novel, but the actual genesis story is a tribute to her own writing fortitude. “I started writing The Wednesday Sisters in my journal on a day when I thought I would never write again, one of those days where you’d rather be scrubbing other people’s toilets than actually writing,” she reminisces. A fleeting image caught Meg’s eye—a woman wearing a red Stanford baseball hat with a blond braid out the back—triggering an idea that would evolve into a New York Times and USA Today Bestseller and one of Entertainment Weekly’s 25 Essential Best Friend Books.

Set in Palo Alto in the late 1960s, The Wednesday Sisters captures the powerful friendship that intertwines the lives of five young mothers who form a writer’s group in the second wave of the Women’s Movement. Read the book after talking with Meg and you’ll hear a familiar voice in the characters of Frankie, Linda, Kath, Ally and Brett.

“I would probably say that there is a little bit of me in some way in every one of the characters I write,” Meg reflects. “You can only write from emotion. You can only write from inside yourself.” In fact, Meg finds that aspect of writing the most liberating, especially given her Irish Catholic ‘good girl’ upbringing. “I can explore those bits of me that aren’t the prettiest bits of me from the anonymity of it being some character and not me,” she says. “That’s part of the reason I really love fiction.”

Meg shares her love of fiction with like-minded neighbors in a Palo Alto book club that dates back to 2004. Meg was writing The Wednesday Sisters at the time, and the new group adopted the name to register the club for a Kepler’s Books discount. “It’s just an amazing way to get to know each other,” Meg says. “Getting together over books opens up discussion because you can talk about yourself but around the topic of the book.” Clearly an advocate, Meg’s website megwaiteclayton.com offers book club guidance and insights, along with personalized tips for aspiring writers.

Following a rigorous fall 2019 touring schedule for The Last Train to London, Meg adapted to making “virtual” appearances in recent months, leaving more time for writing. Her film agent is currently shopping Meg’s The Last Train to London screenplay, and Meg’s eighth novel (she’ll only say it’s a story of great heroism set in World War II Europe) is due January 2 for publication in early 2022. And yes, she’s ready with other ideas lined up behind it.

Although Meg Waite Clayton’s name is typically preceded by the description “international bestselling novelist,” she remains modest about her achievements and name recognition. “I’m not Steven King and I’m not Margaret Atwood yet,” she says. “I’m very cognizant of that, which is why I try to focus on the writing itself. I love the writing and I feel honored and lucky to be publishing, but it is the writing that sustains me.”