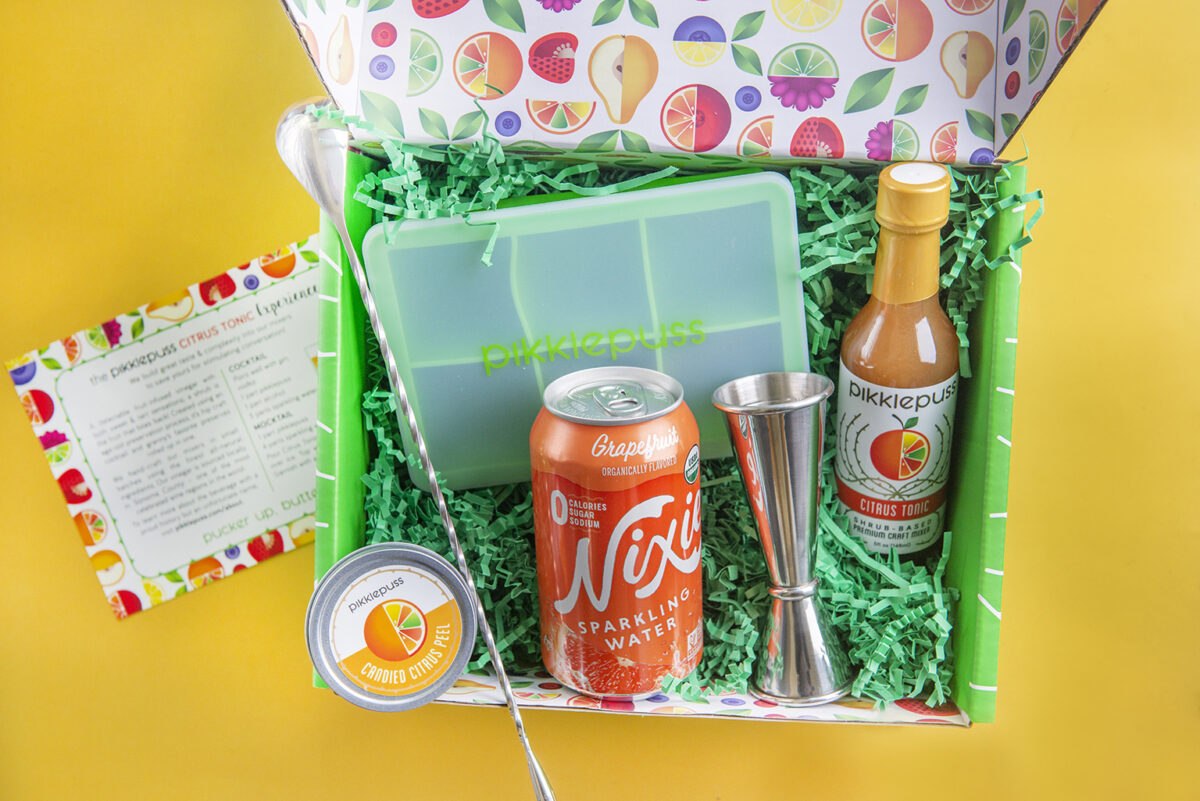 “It was love at first sip,” says pikklepuss owner Juli Alderson, of her introduction to shrubs during a friend’s socially-distanced get-together in 2020. She was so smitten with the fruity-tart blueberry beverage, that she got the recipe from her friend, bought a book on shrubs and kicked off a quarantine kitchen project that evolved into an eco-conscious small business with award-winning products.

Shrubs (also known as drinking vinegars or drinking shrubs) are made from fruit macerated in sugar and combined with vinegar to create a sweet-tart syrup that can then be mixed with water, alcohol or both. The history of shrubs in the U.S. goes back to the Colonial period, during which two variations of the beverage evolved: an alcoholic version that paired a syrup of citrus, sugar and aromatics with brandy or rum and a non-alcoholic fruit vinegar that was popular as a summer thirst-quencher. In recent years, shrubs have seen a resurgence, both as a healthy beverage and as a darling ingredient of craft cocktail makers. 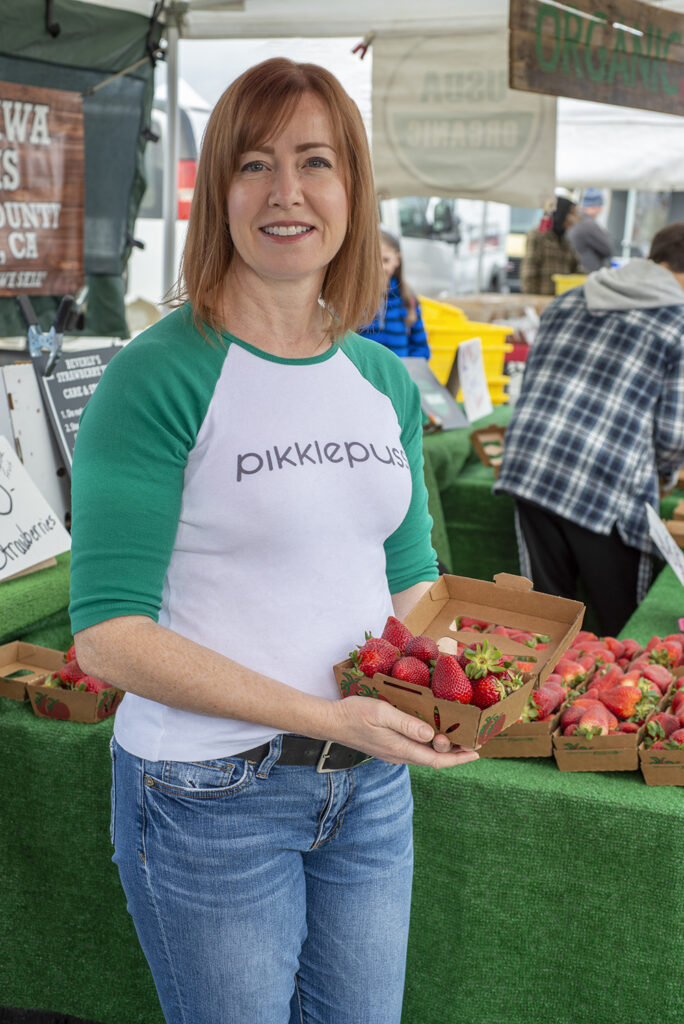 “I’ve always loved a flavor profile that’s slightly sweet and slightly tart, and so I think that really struck a chord with me,” notes Juli. An enthusiastic cook with a penchant for reverse-engineering restaurant meals at home, she credits her upbringing in rural Alberta, Canada, with providing a foundation for creativity in the kitchen. “My family did a lot of preserving when I was growing up,” she recalls, “and we had a huge, acre-sized garden.

A country kid with city dreams, Juli moved to Toronto to attend Ryerson University and later began a career in sales with Cintas. But she had a long-held goal to land in Manhattan. “That was the pinnacle,” she says—until she made a visit to San Francisco. Juli arranged a stateside job transfer, first to San Diego, where she met her husband-to-be, and finally to Redwood City in the early 2000s, where they settled and started a family. “I love it here; we’re in a really great community,” she shares.

Working from home during the early months of the pandemic gave Juli an opportunity to develop her shrub-making skills while holding down her day job as a global sales manager for Cintas. Once she had a few solid recipes, Juli assembled a portable cocktail kit and began sharing her shrubs with friends during outdoor gatherings. The feedback was positive and encouraging, and the idea for a viable business began to coalesce. “I wanted to make it easier for people to spend more time socializing,” she says, “and less time doing mixology.” Her idea was to create a concentrated mixer that needed nothing more than the addition of alcohol and/or soda water.

Having what she calls “an entrepreneurial mindset,” Juli has always kept a running list of business ideas throughout the years and had written the word “pikklepuss” on her whiteboard sometime in 2015 or 2016—a callback to her mom chastening, “Don’t be such a picklepuss,” meaning sour face, when anyone woke up in a grouchy mood. “I thought, ‘Wouldn’t it be a fun name for a company?’” In the midst of perfecting her shrub recipes, Juli looked at the whiteboard one day and had a lightbulb moment. “I just said ‘This is pikklepuss.’” The name in search of a company had found one

In early 2021, Juli had what she calls a listen-to-the-universe moment. On the same day that she was assembling her minimum viable product (rough packaging containing shrubs and a cocktail kit) to mail to friends for their feedback, she was also having a conversation with her longtime employer about her future and decided she was ready for a new path. “I was burnt out and looking for a change,” she explains. Parting ways with Cintas on the last Friday in February, she officially launched pikklepuss as a full-time venture the following Monday.

A one-woman show, Juli does everything herself—from making the shrubs at Kitchentown in San Mateo to bottling them and fulfilling orders that come through the pikklepuss website. Her farm-to-glass approach includes using locally sourced, organic and non-GMO ingredients and composting or upcycling fruit solids to reduce waste. 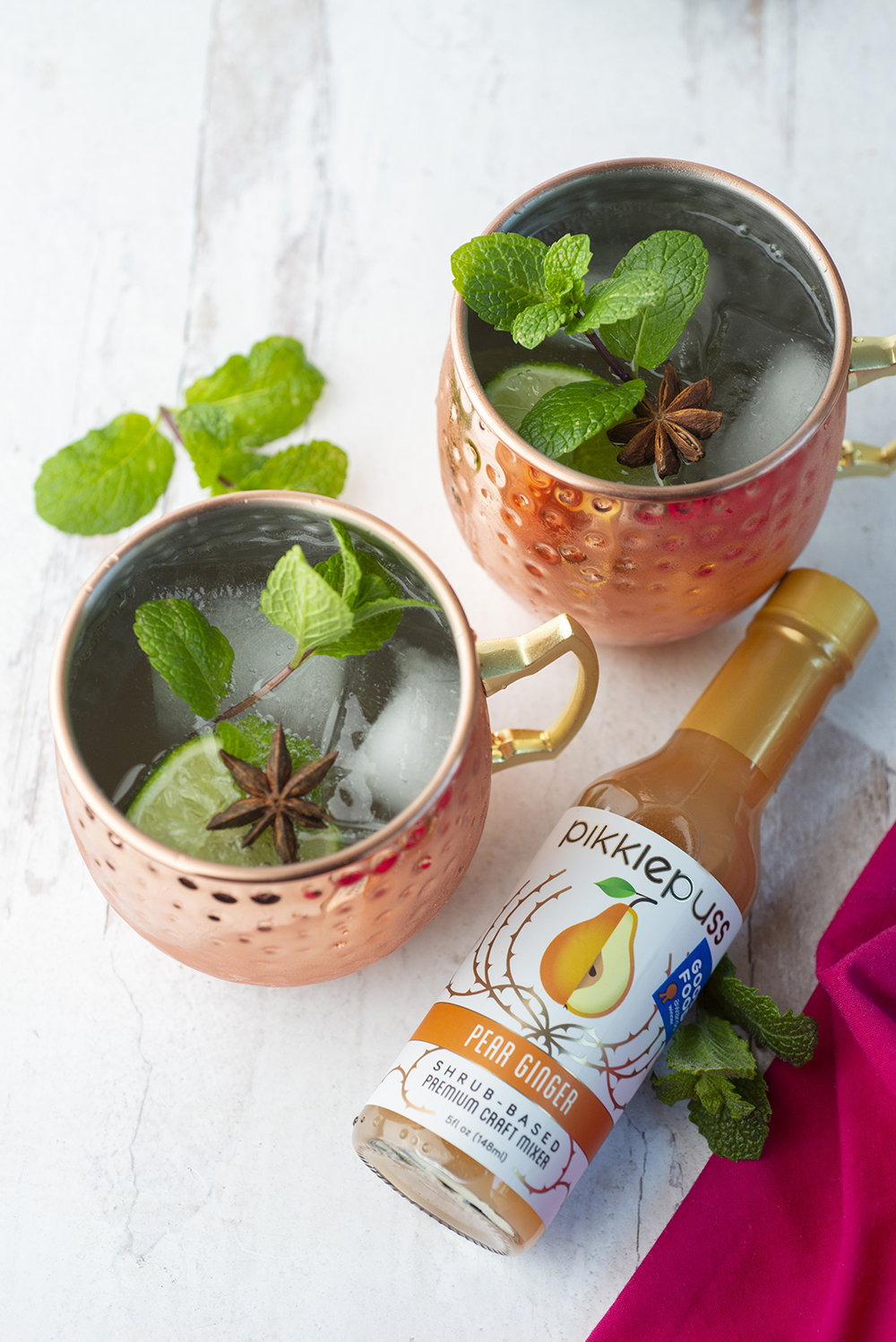 The pikklepuss product line consists of four shrub-based mixers for cocktails or mocktails: Citrus Tonic, Razzle-B Lime, Pear Ginger and Strawberry Pepper. “I just felt as though those flavors came together the best, and they didn’t need any more tinkering,” she states. Pear Ginger and Strawberry Pepper each earned a Good Food Award in February 2022 for their balanced, elegant flavors.

Juli also created a curated cocktail kit around each mixer, with names like “The Ultimate Gin and Tonic” and “The Ultimate Raspberry Daiquiri.” Each kit, packaged in a colorful box, includes a mixer, selected bar tools and a snack. The Gin and Tonic and Raspberry Daiquiri kits also contain an upcycled food product—candied citrus peel and raspberry fruit leather, respectively. Think of each collection as a cocktail party in a box: just add friends and your libation of choice.

The universe again brought unexpected opportunity Juli’s way in November 2021, when Redwood City-based Balsam Brands reached out with an offer she couldn’t refuse. “It was so perfectly aligned with my interests,” she shares. Taking on a full-time role has meant transitioning to part-time with pikklepuss for the time being.

Long-term, her goal “is to be the Fever-Tree of shrub mixers,” she adds, name-checking the premium mixer business. But for now, next steps include focusing on distribution and sales so that she can get pikklepuss mixers into more glasses. And as a shrub evangelist, she’s ready to spread the word about the beverage she fell for at first sip. “The saddest thing is that a lot of people don’t know what a shrub is,” she points out. “And I would just love to share them with the world, because they’re so delicious.”