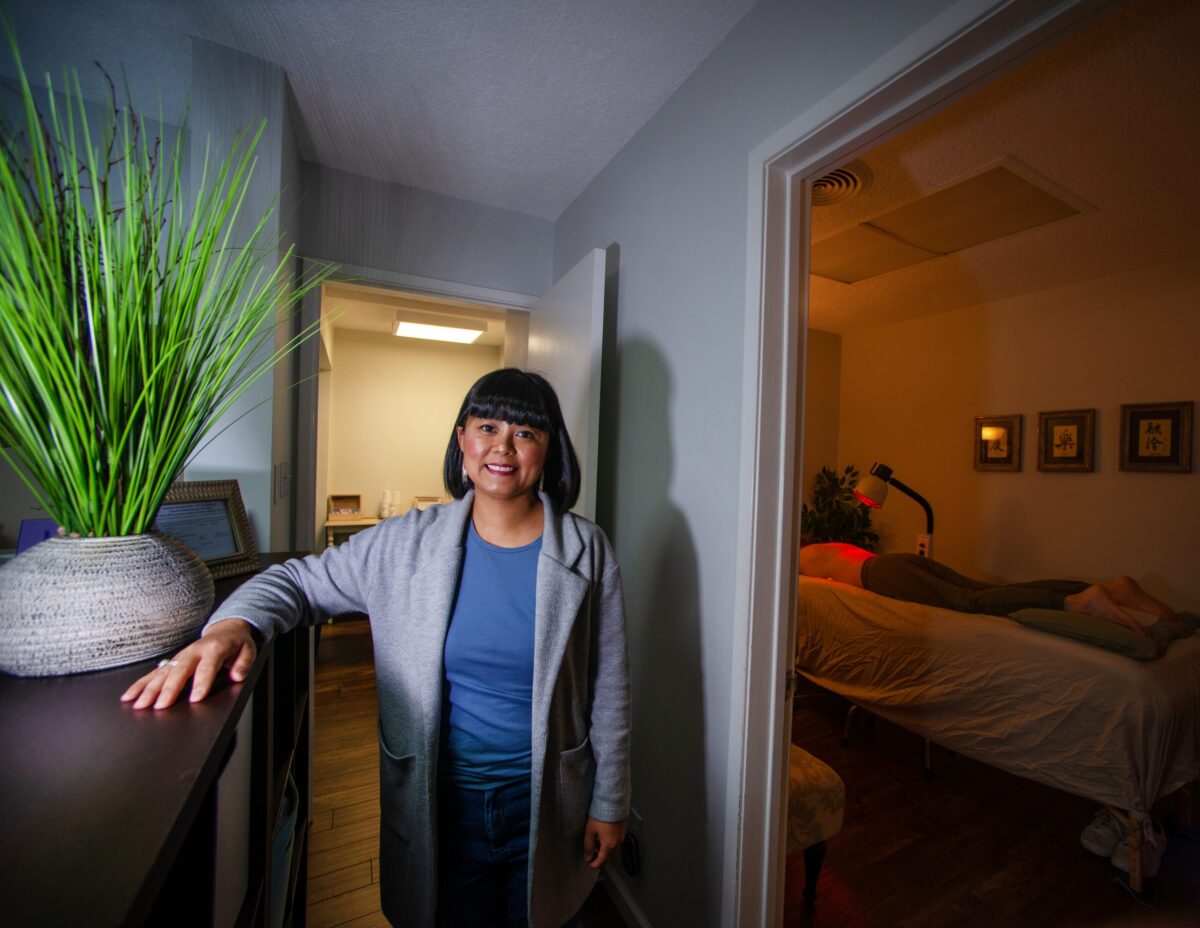 Sharp, radiating pains spurred by sciatica shot through Stewart Leber’s right leg and after five years of trying ineffective remedies, the Foster City resident in his mid-70s was ready to experiment with an alternative form of medicine.

He was on a hike in Lake Tahoe with his niece, pausing for breaks to calm the nerve firings, when she recommended that he check out an acupuncturist. That really made him take pause.

“You’re talking to a salt-of-the-Earth type,” Stewart says of himself. “You have to prove it to me and if it’s off the norm, I’m not going to be the guy to jump right in.”

Stewart scheduled an appointment at the San Mateo Acupuncture Center with Angela Galatierra-Ganding and began by detailing his problem and answering a few lifestyle questions. She didn’t promise him immediate relief but said she could help with the pain by administering thin needles into certain areas of the body. Angela explained how this would help increase blood circulation to the areas of pain.

A dozen or so needles and a few hours later, Stewart was shopping at a Home Depot when he realized that he wasn’t feeling any discomfort in his leg anymore. His sciatica wasn’t eliminated but with a steady regimen of acupuncture, Stewart says he’s keeping the pain under control. He’s returned to Angela (whom he affectionately calls “Dr. GG” due to her last names) every 10 days since April 2019 and his belief in acupuncture rises as the pain from his sciatica subsides.

“It’s much, much better. It’s not completely gone but I’ll go days and nights without even thinking about it,” Stewart says. “Dr. GG has proven to me that acupuncture works. If you had asked me before if someone putting needles in your body could make you feel better, I’d have laughed. But it really works. And the fact that it’s been around for 2,000 years—I’d say it’s doing something right.” 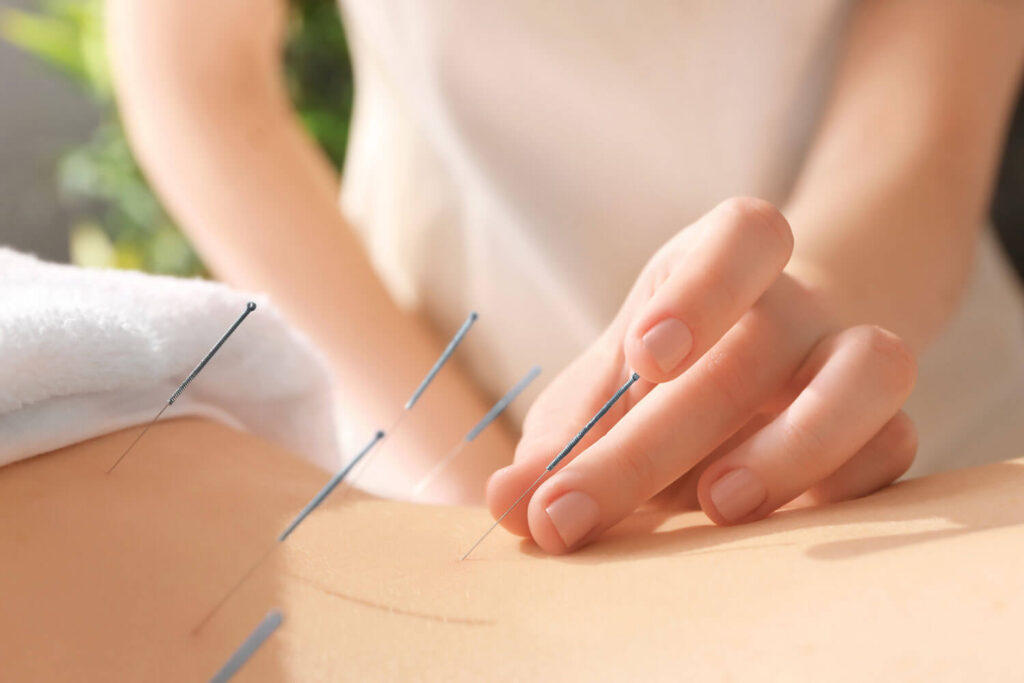 Acupuncture, a form of traditional Chinese therapy, has long piqued the interests of bodies in the West, with steady gains in popularity since the 1960s and ’70s. Although the science is sometimes questioned and it’s not without skeptics, acupuncture has proven to be a helpful form of medicine for countless people, the mystique surrounding its function notwithstanding.

While acupuncture is still finding its place in the modern medicine conversation—Medicare, for instance, doesn’t cover acupuncture for any condition other than chronic low-back pain—it’s always being studied. In March, The British Medical Journal published research that showed how acupuncture is an effective treatment for episodic migraines.

On the Peninsula, no other community has embraced acupuncture quite like San Mateo. Peering over a map of the city, individual acupuncture clinics stick out like needles running along the back of its downtown.

While working for a nearby chiropractor, Angela grew a client base solid enough to strike out on her own. In 2013, she established San Mateo Acupuncture Center, where she serves a variety of ages, from children to clients in their 90s, for conditions ranging from the neurological to cardiovascular. Her cases tend to be mostly pain management (often from folks who work at computers or have desk jobs), but she’s noticed a recent boost in fertility patients.

“That’s why acupuncture is so great,” Angela notes. “We treat each case differently. There’s not one standard protocol for a specific condition. When someone comes in, we do an expanded health history and from there we figure out what systems are out of balance that need to be put back.” 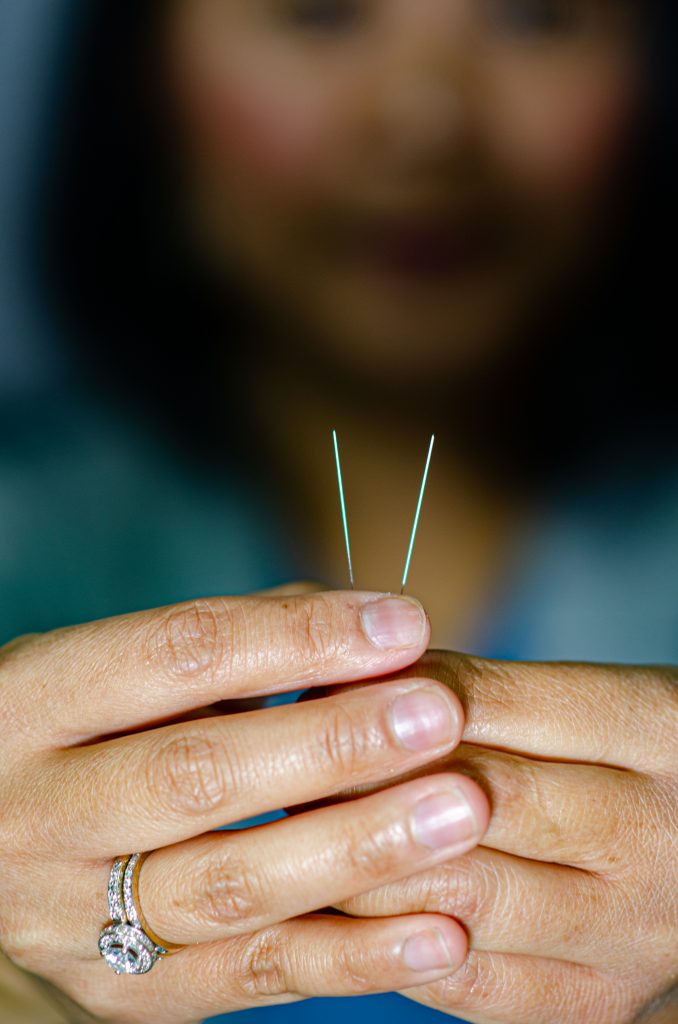 First-time users might be surprised by some of the intake questions asked during an inaugural visit but the purpose is to develop a well-rounded picture of the problem. Someone coming in with pain in the arm will receive questions about their diet and sleep schedule.

“I always say acupuncture is the last straw because the person may have exhausted Western medicine and feels like nothing is providing relief—so now what?” Angela says. “I’ll tell my clients that the mind has such a powerful effect on the body. If you come in for a treatment and are open, it will allow the medicine to work as opposed to someone who comes in and feels closed off. Not to say I don’t see the skeptics. The more we educate our clients about how acupuncture works, the more they can visualize in their minds what’s happening in their bodies when they’re lying down for a treatment.”

Perhaps the image that comes to mind for first-timers is that of needles being stuck into the body in a seemingly tortuous ceremony, but in fact, the needles’ tips are so fine and placed with such delicate care that it feels like nothing more than a calculated poke.

Angela likens the body to a network of freeways, bridges and sidewalks that transfer blood. When an accident on the freeway occurs, so to speak, and a person feels pain caused by blockage or stagnation, the purpose of the needle is to unblock the pathway to allow blood to better transfer nutrients to organs.

“If someone has shoulder pains, I’ll go directly to the injured site but will also figure out what freeway was affected so I can open other areas so that blood can flow naturally,” Angela explains. “People will come in for shoulder pain and ask, ‘Why is there a needle in my leg?’ It’s because we treat the body as a whole.” 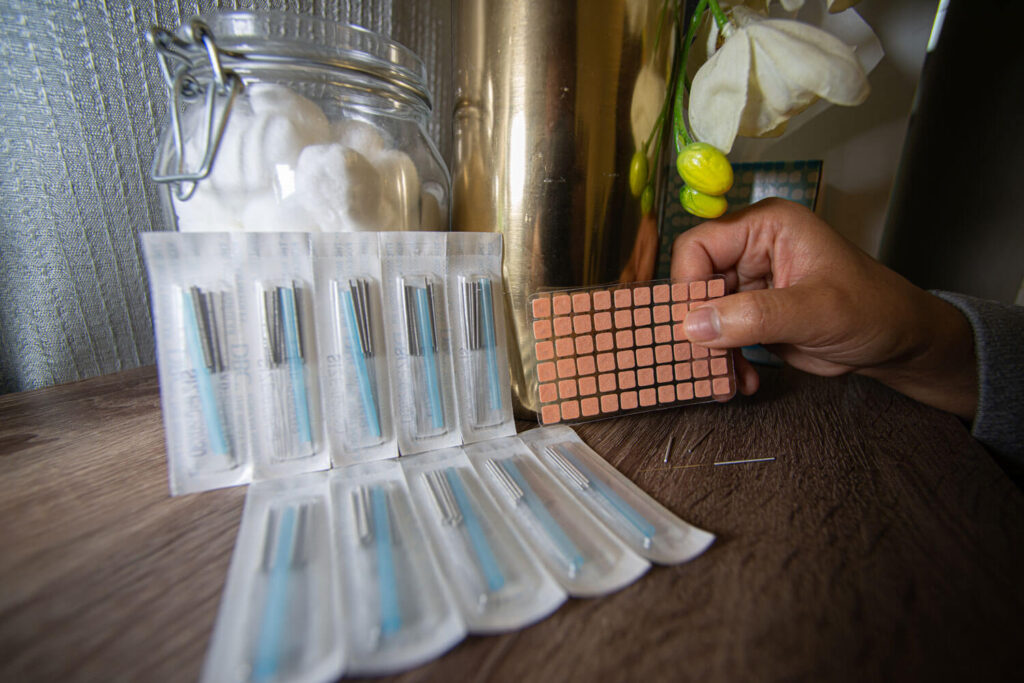 Angela can relate to a patient’s sense of doubt during the first visit because she felt the same uncertainty when trying out acupuncture for her first time in 2006. Her parents used it for pain relief during her childhood years in Manitoba in central Canada. After graduating from the University of Winnipeg with a B.S. degree in chemistry, Angela worked in a biopharmaceutical lab, but had ambitions to work in the healthcare field.

“Seeing acupuncture through my parents, I went in for treatment myself. I remember being totally skeptical and anxious, but after talking to the practitioner and learning about it, I felt more open,” she recalls. “When he inserted the needles, I ended up falling asleep. I walked out feeling amazing. How cool would it be to be that person on the other end?”

Angela relocated to the Bay Area and started acupuncture school in 2007. She received her Master of Science degree in Oriental Medicine at the Acupuncture and Integrative Medicine College in Berkeley in 2010 and acquired her license the following year. 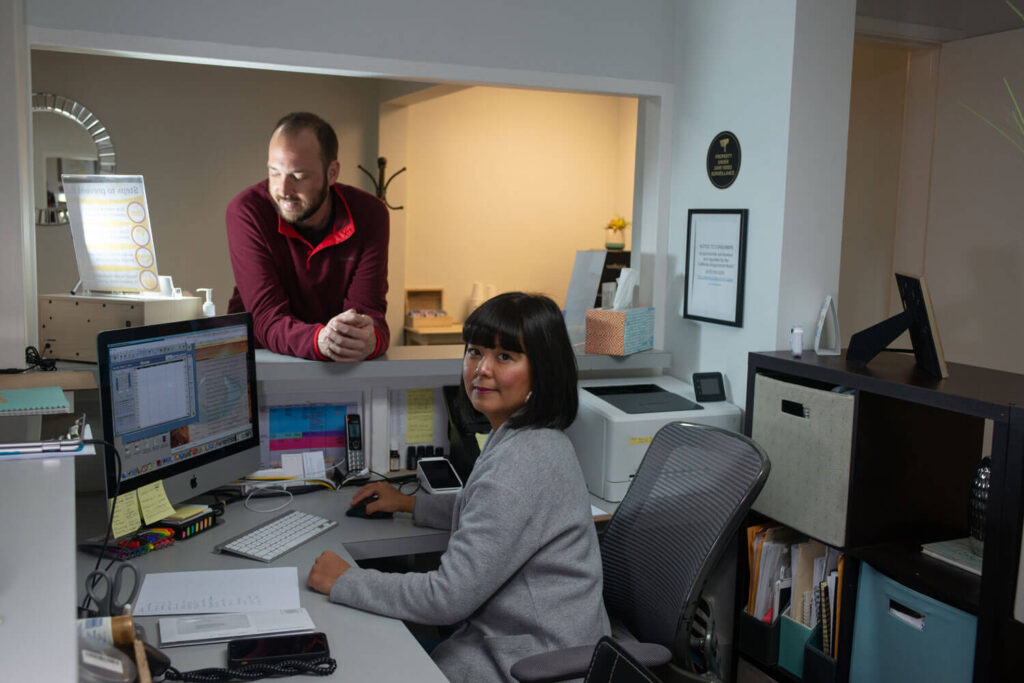 Surrounded by numerous acupuncture clinics, Angela distinguishes herself by having a dependable practice with glowing YELP reviews and an easy-to-Google name. She also credits her mom, a cake shop owner in Canada, who bestowed upon Angela a simple approach to customer service.

“Seeing how my mom interacted with her customers, it was all about building relationships with clients. When clients trust you, they refer other people to you,” she says. “All the relationships I have with my clients are mutually beneficial—not only do they provide business but they also meet my need for fulfillment.”