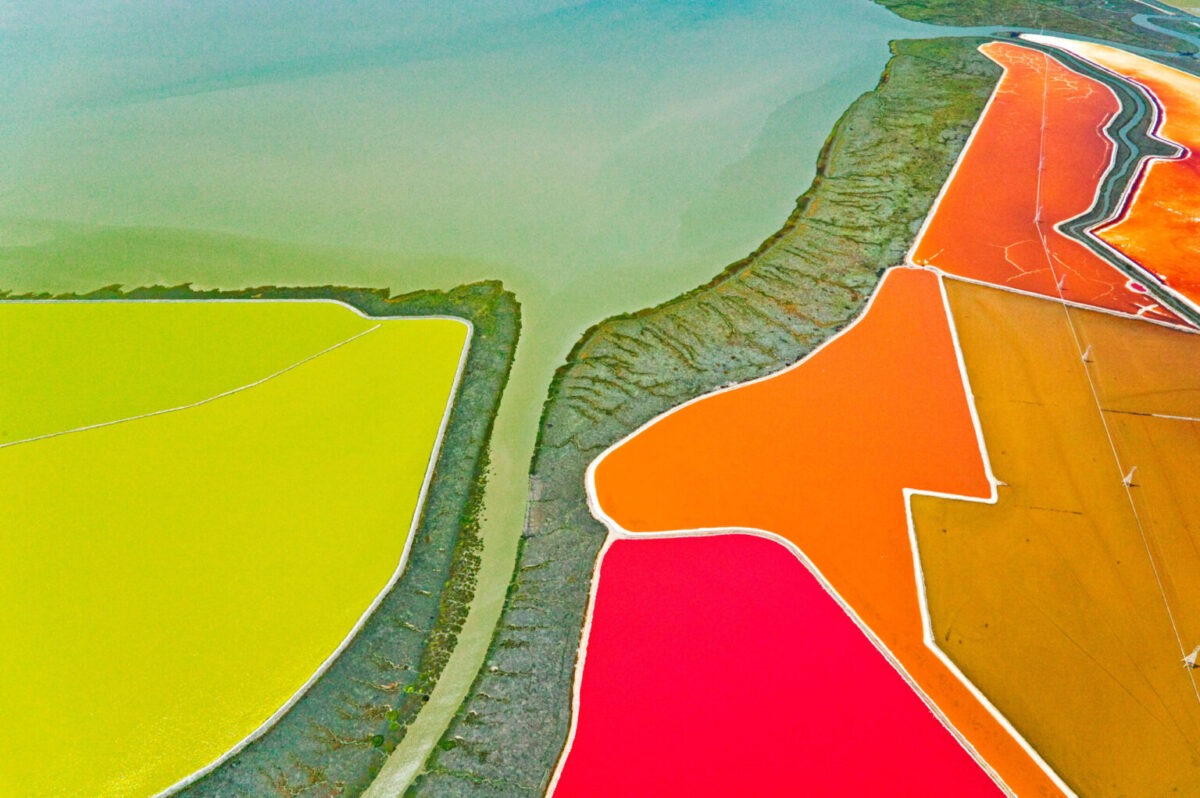 The line between a practice shot and the money shot began to blur when photographer Colin McRae returned home and started developing his camera rolls.

Sometime in 2006, the Berkeley-based photographer was working a commercial job that began with a helicopter liftoff from Hayward followed by a half-hour flight to shoots in the South Bay. Peering out from the chopper and passing time, Colin started snapping 35-millimeter images to warm up. His lens soon gravitated towards the peculiar topography below where vibrant colors flashed like pop art beside lines that zig-zagged through the Bay.

The explanation for the spectacular aerial views: miles of ever-changing salt ponds abutting the Peninsula’s bayside—from Redwood City to the southern point of the Bay. With portions formerly used by Cargill Corporation for salt production, the ponds continually shift in shades and tones with ephemeral cycles caused by salinity.

By way of an illuminating biology lesson, microorganisms thrive as salinity levels increase, and three in particular—
Dunaliella, Halobacteria and Synechococcus—create the colors seen in the water. When brine is concentrated, the algae impart a green hue whereas increased salinity causes an uptick in the population of brine shrimp that darkens the water to produce a deep-red pigment.

“The colors change all the time,” Colin observes. “I’d fly over areas that were brown and the next time they’re red.”

Over years of assignments, Colin amassed some 95 unique images for a series he’s titled The Abstract Art of the San Francisco Bay Tidelands, which he’s shown at the McLoughlin Gallery in San Francisco. It’s an ongoing act of observation that he’s continuously adding to—that is, whenever a helicopter ride presents itself.

PUNCH offers a sampling of Colin’s chopper’s-eye view of the Bay, a selection of his work that reconsiders the borderlines of beauty.

“I love the abstract nature of it. When you’re looking down from a distance, it is beautiful,” Colin says. “It’s striking. It’s something that you’d never see anywhere else.”