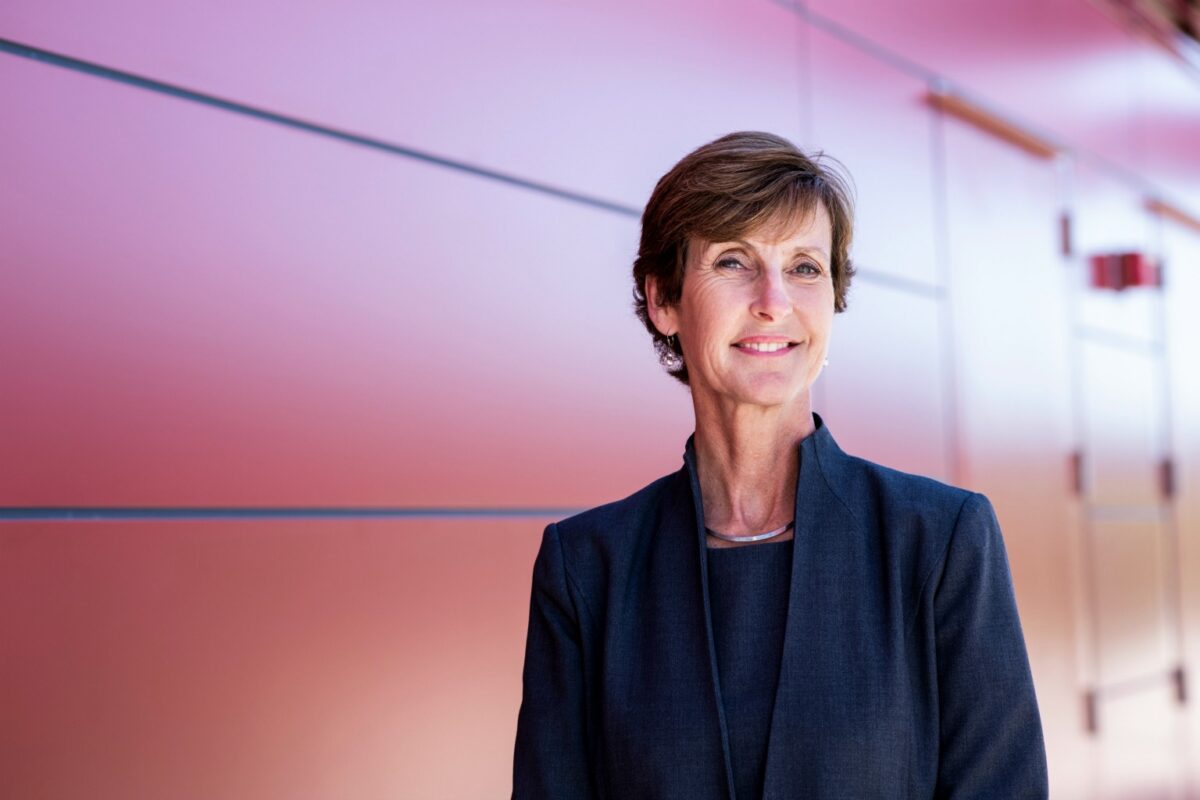 At 4AM, the iPhone alarm goes off. About half the time, Helen Wilmot is already awake, mentally outlining the day ahead in her mind. Settling in at her computer downstairs, she immerses herself in email (while spooning down a bowl of Weetabix), succinctly responding to questions and sending out action-oriented summaries to her team. At 5:50AM, Helen dashes out the door for an early-morning bootcamp session, returning by 7:15AM. After jumping in the shower, she tackles the flurry of new emails that have come in (while gobbling a poached egg and buttered toast)—and then hops on her bike for the six-minute commute from her Menlo Park home to the Stanford campus.

And that’s when Helen really kicks into gear. “I’m usually in the office by about 8AM, and then I am literally in meetings all day long,” she says. “For the entire day, I will be double-booked most of the time; I’ve become an expert at multitasking.”

That’s a good thing because that’s what it takes to do Helen’s job—which is essentially breathing life into Stanford’s new $2.2 billion 824,000-square-foot hospital that’s scheduled to open later this fall. For the past eight years, working in parallel with VP of Construction Bert Hurlbut and General Contractor Clark McCarthy, Helen shouldered responsibility for the operations planning and opening of the new hospital—while still managing all the non-clinical services (ranging from food services to building engineering) for Stanford Health Care’s patients, staff, physicians and visitors.

“In terms of the scope, my job is unique, and it came to me because someone believed I could do it. I’m so fortunate for that,” she says. “I was not given a playbook about what to do—it was my job to create the playbook and that’s a rare opportunity in life.”

Always mindful of the scarcity of time, Helen is fully aware that move-in day is looming just ahead. While Stanford’s new hospital will be defined by cutting-edge technological advancements, she keeps an old-school countdown clock mounted on her office wall, ticking off the final days, hours, minutes and seconds to “Patient Day One.”

Although Helen now lives a scant mile from Stanford, reversing the clock reveals a journey that started a much greater distance away. Born in Dublin, Ireland, the middle sibling in a family of five kids, Helen describes her childhood as one in which “self-sufficiency was kind of expected.” The unexpected happened when Helen was 12. The Rehabilitation Center at Santa Clara Valley Medical Center recruited her father to serve as medical director, uprooting her family from Ireland and bringing them to Los Gatos. “In those days, there was a weak economy in Ireland and usually about half of your family had to leave Ireland to get a job,” she says. “My parents were very forward-thinking and realized that by having universities in the area, you’d likely always have an economy, and so they believed their children could be successful here.”

From her upbringing in 1970s Ireland, Helen recounts being familiar with three defined career paths for women: bank teller, teacher or nurse. She chose nursing, with a focus on cardiovascular ICU. “I really liked it because it’s very active and it takes a lot of fast processing,” she says. “But I wanted to have an ability to have a broader platform
of influence.”

Helen earned her MBA from UCLA’s Anderson School of Management and applied her healthcare experience to consulting. “I was in a career where I was on the road for seven years—every Monday through Friday, I was on an airplane,” she says. “When we started a family, I decided I needed to get off the plane, so I joined Kaiser Permanente as an executive.” Following Kaiser, Helen started and sold a healthcare software company—and then through an “arm’s length relationship,” she got a call about a project at Stanford. The year was 2004. “I was literally doing the work within 48 hours of me going in,” she says. “And then it just grew from there.”

After consulting on the approval process for the building of Stanford Health Care’s new Redwood City outpatient campus, Helen got the nod to expand her responsibilities: “I actually had almost the same role I have now. That was 380,000 square feet. It was the largest project Stanford had ever done in the history of Stanford—except for building the 1989 hospital—and it was significant and transformative for Stanford because it was the first big clinical presence away from the main campus.” 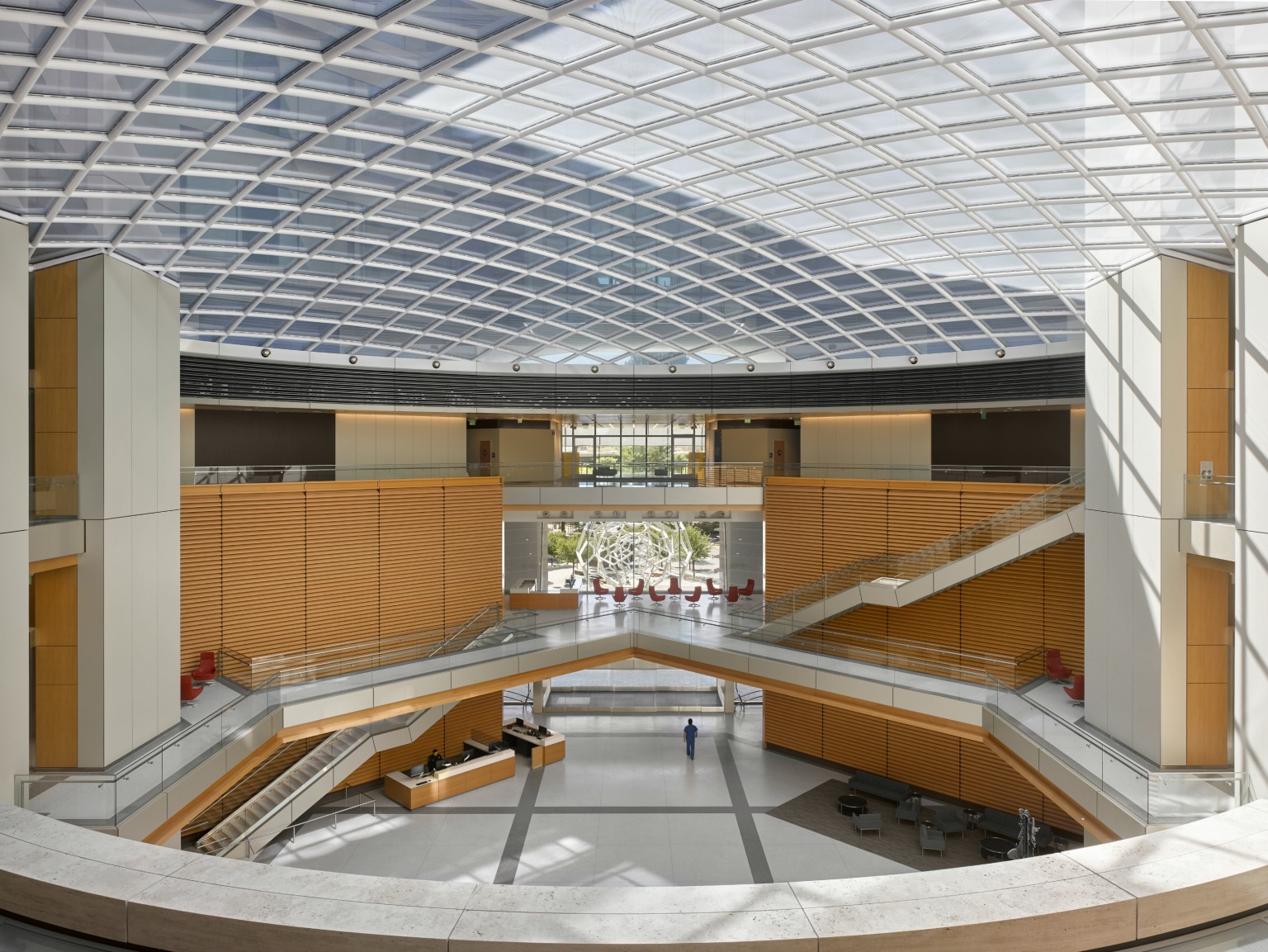 For seven years, Helen served as VP of ambulatory care, leading Stanford’s Redwood City initiative, as well as managing 35 outpatient clinics with a staff of 1,200 people. Then, in late 2011, opportunity knocked even harder. “I was asked to step away from that and take on the operations leadership of activating the new hospital,” Helen says. “It meant walking away from something I had built and I did not know the definition of exactly what I was going to do. What does it mean to operationally plan and activate a hospital that big? We’d never done it before.”

“It’s not just a multi-story rectangle. It’s a healing environment and it’s also an iconic architectural building for Stanford University. It’s a highly complex building that’s been designed to welcome not only patients but an entire community into it,” Helen says. “The architect Rafael Viñoly has done a fine job of combining all those elements but he also created a significant challenge for us to build.”

In 2012, Helen dove in. As VP of Facilities Services & Planning, her job encompassed multiple aspects—starting with managing impact: “The new building is being built right next to our existing hospital and clinics—noise management, dust management, parking, parking flow—all of that comes back to me, even down to the detail of sealing the windows with special tape because it’s going to be six years of dust. There’s a whole series of things to do.”

Although the new hospital’s physical structure was well defined, Helen worked closely with her operations peers to realize the vision for the new hospital, collectively addressing the question, “How do we make the building come to life?” Achieving goals like “Patient-Centric Sensing” and “Connected Care” required evaluating and incorporating cutting-edge technology and processes. “That takes a lot of thinking,” Helen notes. “You have to really dig deep into your vision and your purpose and then translate that into a true patient experience. We have to make sure that when we move into that building, the product that we deliver and the service that we deliver is different from what we do now.”

Along with coordinating with the construction team and helping actualize the hospital’s vision, Helen is charged with making sure the building will operate. “Since I run facilities, I work with my operations partners to make sure that everything works—that the O.R., the patient care team, the imaging team, the lab and the pharmacy are getting everything they need,” she says. “The project plans are very detailed and sequential.” 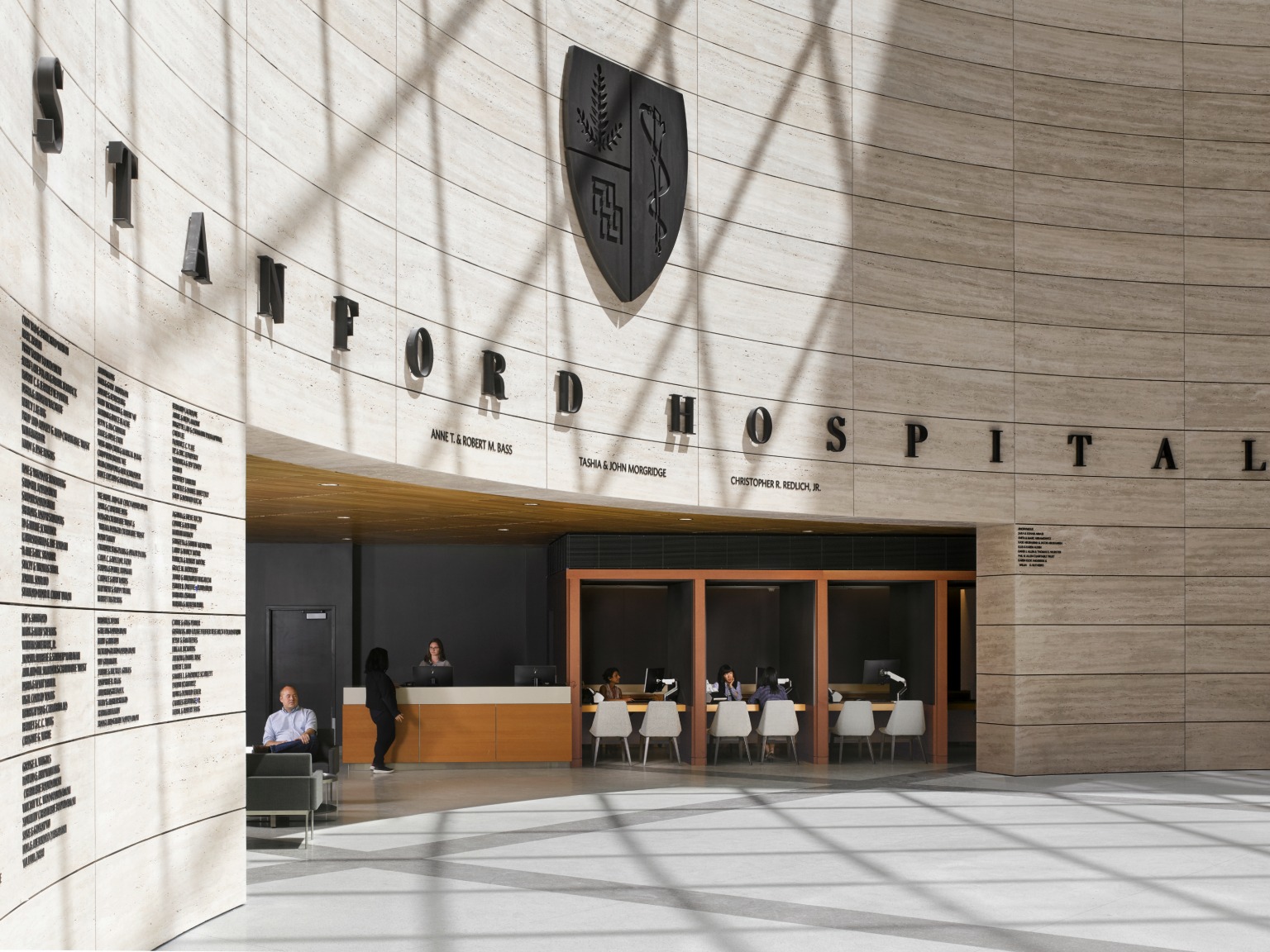 With the board of directors, community leaders and staff, Helen also has an outward-facing role—serving as ambassador for the hospital project. It’s a vital task, given that the project’s success is tied to tolerating eight straight years of construction. “I am the PowerPoint queen,” she says. “My job is to share with people, ‘This is what we’re building. This is how we’re going to do it. This is what you’re going to experience. And this is how we’re going to get it open.’ We help everyone understand that the output at the end will be amazing.”

Over the past eight years, Helen’s roles have cycled through a series of stages—starting with operations planning (“During this level, we pulled together 152 work flows.”), through the current phase of activation (“This is where you get down to the specific details including training the staff.”), which will be followed by the move and stabilization. Although a two-day community open house took place in mid-September, the actual move or “Patient Day One” is still several weeks out. “The pre-planning for the move is super extensive,” Helen shares. “The actual move of the patients will take about four hours. It’s very precise with one patient moving every four to six minutes.”

Stabilization, a three- to six-month settling period, comes next. “It’s almost like a building has a personality. You have to see how it works before you start making a lot of changes,” Helen explains. “So I will manage a group that will meet every day, if not twice a day, after we move in to sort through the thousands of things people want to change. You have to be able to filter how much of it is for patient care—how much of it is really critical—versus how much of it can wait.”

That’s just a summary of what gets Helen up at 4AM every morning—without even touching on what keeps her up at night. Helen acknowledges that with long-term projects, “survival isn’t necessarily an objective,” but when she took the job, her intent was to see it through to completion. Thankfully, the scope of the undertaking keeps her sufficiently fueled. “I have the good fortune to have exposure to the full breadth of the project, both the width of it and the depth of it, the strategic and the small details, and so as it goes through its evolutions, I’m able to find stimulation and motivation in different aspects of it,” she reflects. “I am highly motivated by solving problems. It’s almost like the more problems you give me, the more I want to do it, and this is literally just one big, huge puzzle to solve.” 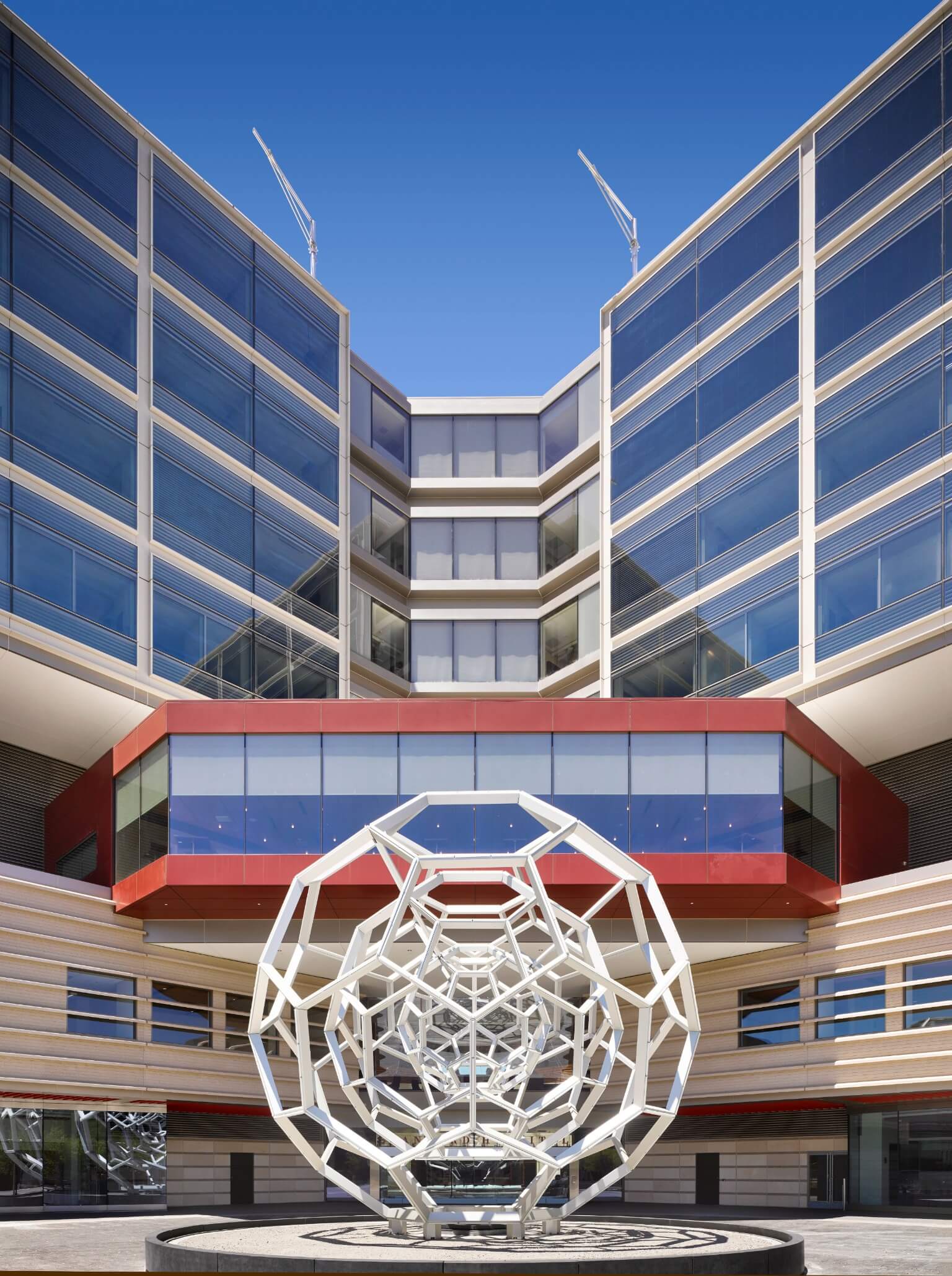 As the culmination of the project draws closer, Helen turns to the puzzle analogy to process all the emotions she’s feeling—relief and pride, of course, but also impending separation. “This puzzle has been in my head for eight years, and now all of a sudden the puzzle is solved. It’s like finishing a giant jigsaw puzzle. You concentrate and work on it and once it is done, it’s no longer a puzzle—it’s a picture, with an entirely different purpose. This hospital now belongs to the community and I have to let go of it entirely.”

However, don’t expect Helen to start sleeping past 4AM. She already knows what’s next—and it’s literally next door. Stanford’s existing hospital at 300 Pasteur, known as “300P,” is gearing up for its own transformation. “I’m leading 300P,” Helen confides. “It’ll be a five-year project taking it almost down to the studs—and it will be operationally more complex because we are building a hospital in an active clinical environment…”

But that’s another story.