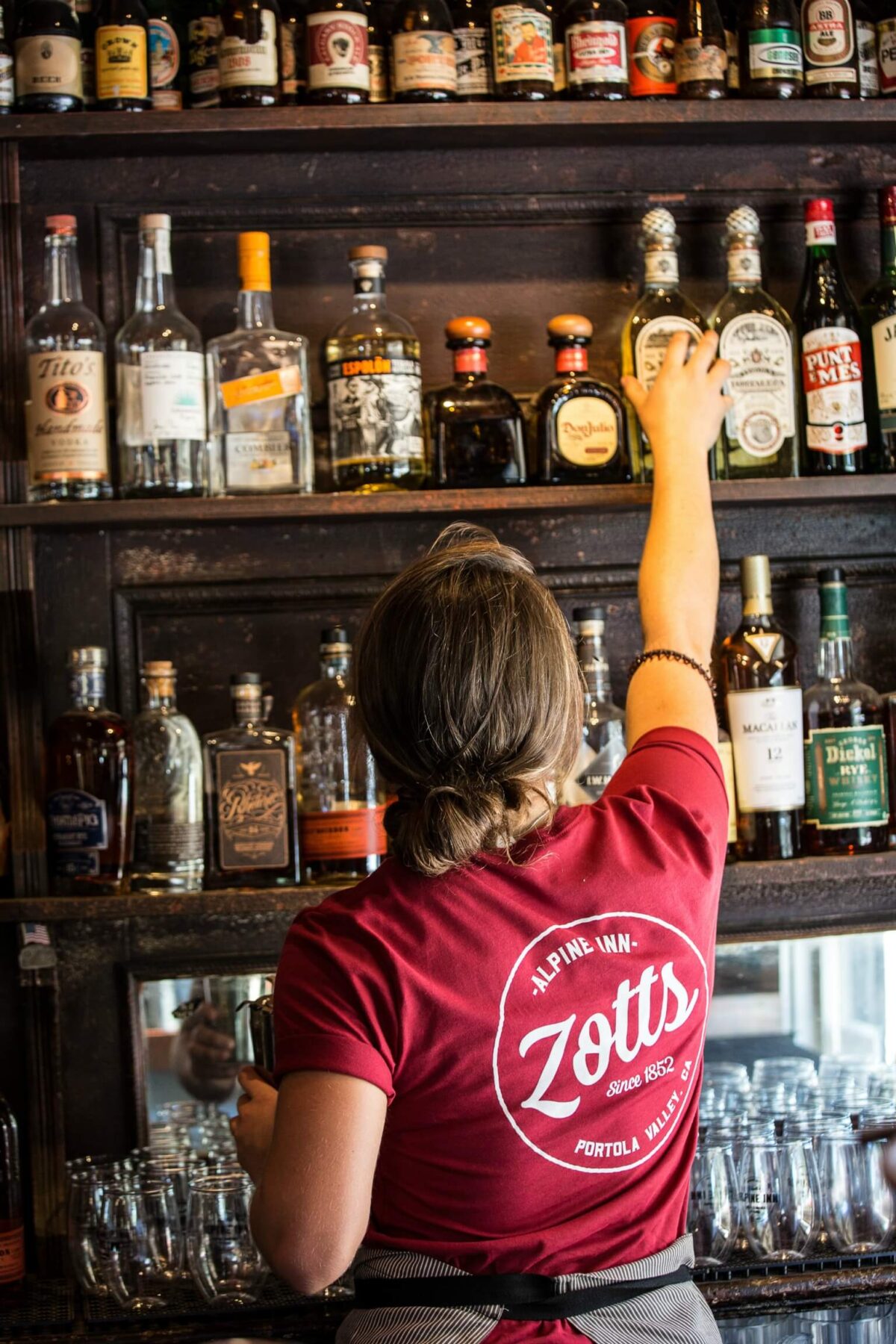 Rossotti’s Alpine Inn in Portola Valley has a long and colorful history dating back to 1852 when Felix Buelna opened Casa de Tableta. That’s the name captured by the plaque next to this historic building, which is a California registered landmark and listed on the National Register of Historic Places. Purchased in 2018 by three Portola Valley families, the beloved roadhouse is now embarking on a new chapter, painstakingly restored and once again open for business.

In its 167-year history, this venue has known many owners. Buelna “sold” to William Stanton, but it’s rumored that he lost the property in a card game at the Searsville Saloon. Stanton called it Stanton’s Saloon, but he, and his widow after his death, leased it to a number of operators, and the beer garden took on a string of names including Fernando’s, Philpot’s, Chapete’s Place and The Wunder. In 1919, Prohibition closed the saloon, but then Julius Schenkel opened “Schenkel’s Picnic Park” as a place for San Franciscans to enjoy the warm creekside location.

In 1933, Enrico Rossotti leased (and later purchased) the property. It’s his name that lives on for locals who think of the tavern as Rossotti’s, or Zott’s, for short. Rossotti is also the name of the soccer field next door, and it even graces the name of Portola Valley’s annual race from the Alpine Inn to Town Center, called “Zots to Tots.” 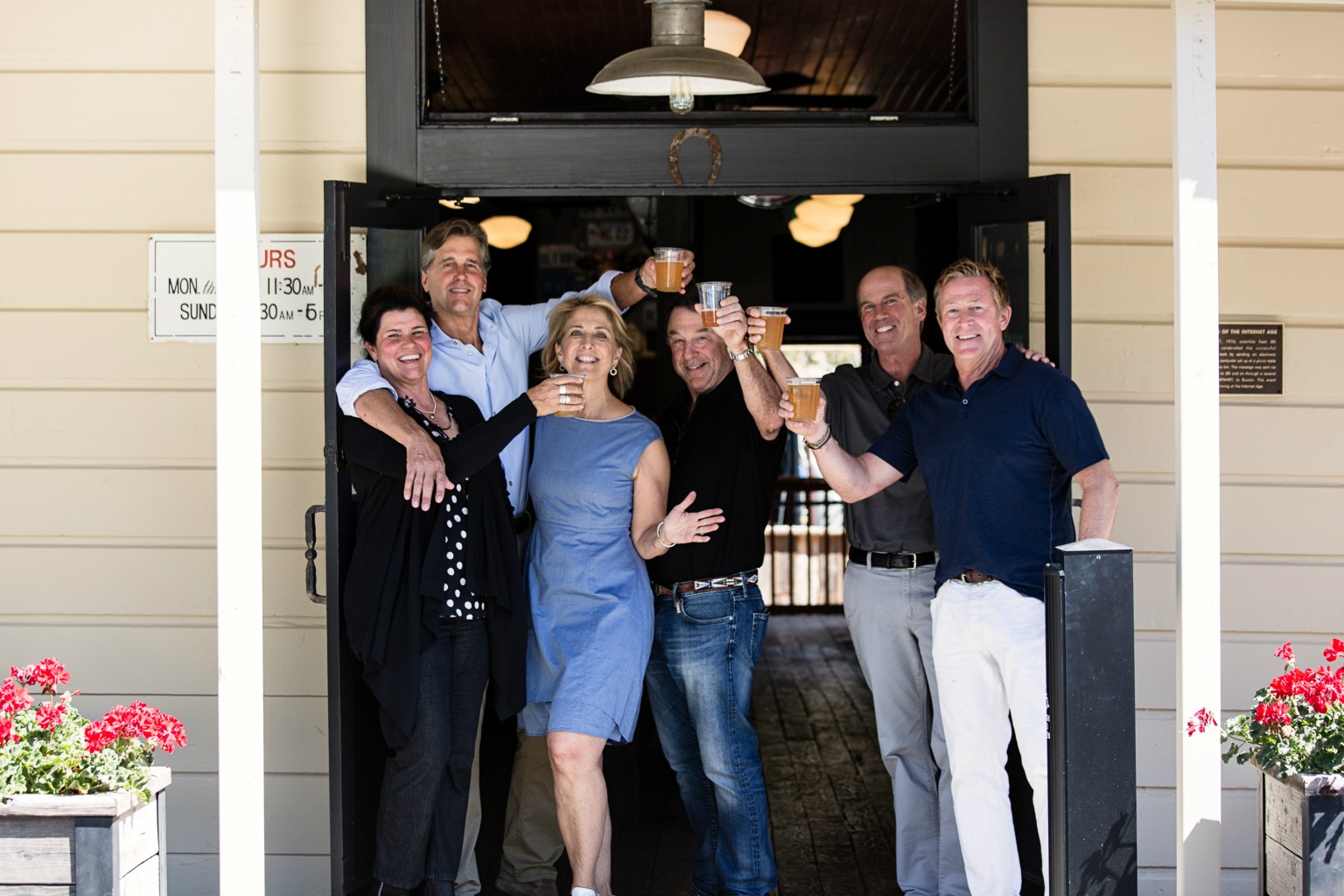 The Alexander and Horther families bought the tavern from the Rossottis but changed the name to the Alpine Inn when the Rossotti family kept getting calls directed to their home phone, back in the day when phone numbers were found by calling 411 directory assistance. And for the next 50 years, the Alpine Inn continued to be a mainstay in the community, hosting basketball teams, soccer parties, cyclists, Stanford students, motorcycle clubs and a host of regulars. It even played a role in the dawning of the Internet age: In 1976, scientists from SRI International successfully sent an electronic message from a computer set up on a picnic table behind the Alpine Inn. It’s this storied past that kept drawing the attention of the new owners, who had their eye on the property for years.

Their chance came in 2018—local residents Stephanie and Fred Harman, Lori and Deke Hunter, and Jim Kohlberg submitted the winning bid in a public sale. They joined forces with operating partner Greg St. Claire, who brings a long history of successful restaurant management with the Avenir Restaurant Group including Milagros, Nolas and Town. Officially renaming the property Rossotti’s Alpine Inn reflects the partners’ dedication to preserving the history and making the roadhouse, as they avow, “the best version of itself.”

The initial intent was to reopen quickly but they soon realized that a true restoration would require months, not weeks, especially given their goal of preserving every detail possible. The back bar is completely refurbished, and the old fridges with stickers still sit in prime position behind the bar. Gone are layers of faded linoleum on the floor, replaced by old barn boards. The iconic historic photos and old license plates are still on the walls, supplemented by memorabilia tied to the community. As Greg summarizes, they tried to “honor every generation that has come here.”

The history of the property was largely instrumental in developing the menu. Greg observes that it really is “a great reflection of the past 167 years and all the immigrants that have owned or operated the Inn.” Latin-inspired dishes honor the Buelna family that originally opened Casa De Tableta in 1852. Sausages and hot dogs pay tribute to the German history under the Schenkels, while charcuterie boards and wood-fired pizzas reflect the Italian heritage. Greg says that old classics like the Zott’s burger will be back but will now use grass-fed ground beef from both Painted Hills Natural Beef as well as his own Rancho Alena. 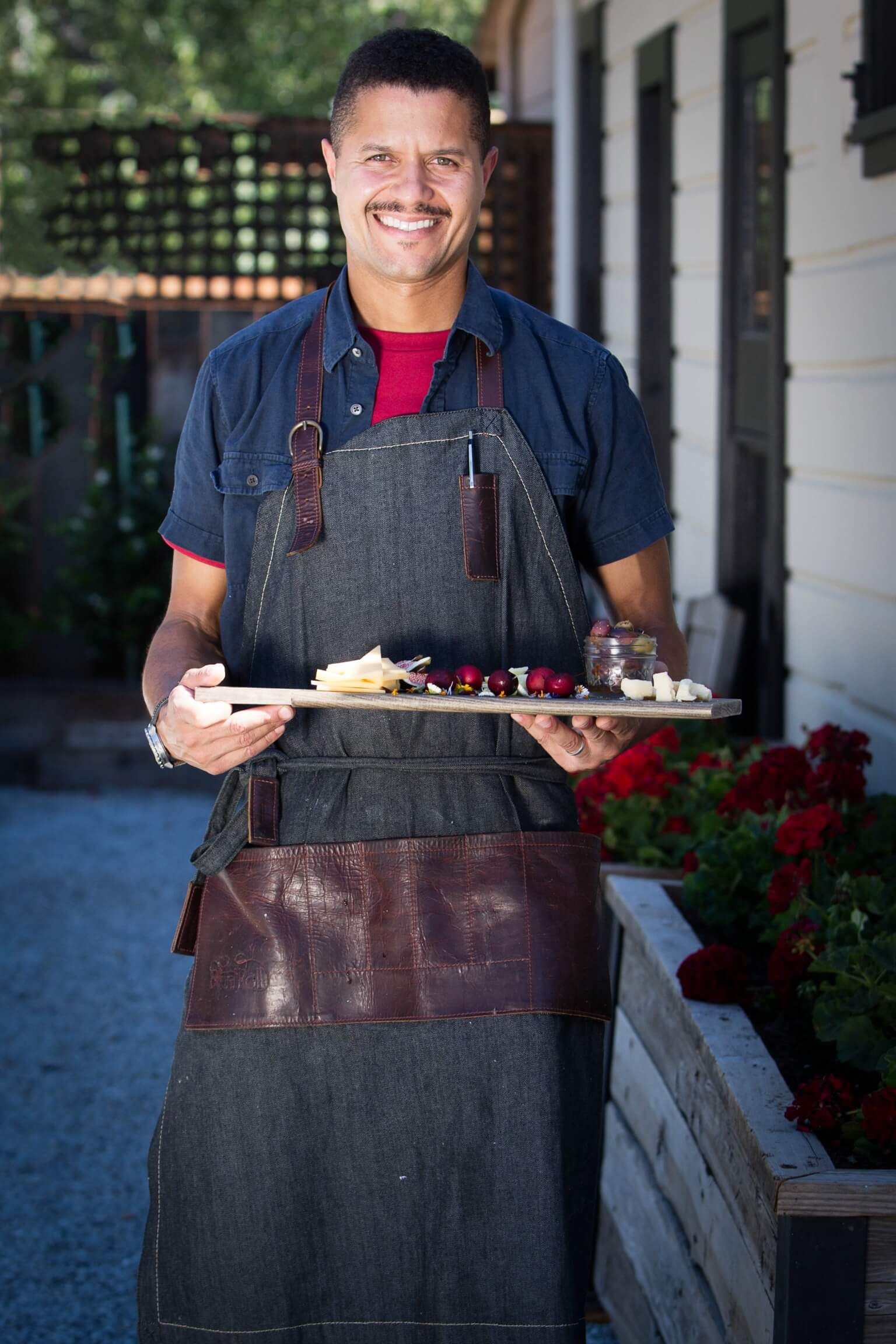 Sharing the same values as the fiercely protective local community, the owners steered clear of creating a “fancy” new place—instead, keeping counter service and a beer garden, just like it was before. New and longtime patrons will enjoy the addition of a refurbished 1948 Dodge Farm Truck that has a built-in wood-fired oven to compensate for the small kitchen.

Technological advancements mean you can order from any of the counters and return to your table to enjoy your drink while you wait for a phone alert that your food is ready. Future plans include being able to order directly from your phone.

The restaurant is fully-licensed, and you will be able to choose your drink of choice—from the classic 40-ounce beer, still popular with some of the regulars, to cocktails, thoughtfully selected craft beers and Zott’s red or white wine on tap.

For decades, carving your name in the Zott’s picnic tables was a local ritual—and those old tabletops are now repurposed throughout: as the back of booths, behind the outdoor bar, as table legs and menu boards. As Greg says, they “kept everything.” And if you’re looking for your old Little League photo that used to grace the walls, it’s still there, but you might have to go searching for the new location. As for the new picnic tables? Go ahead. Carve away. 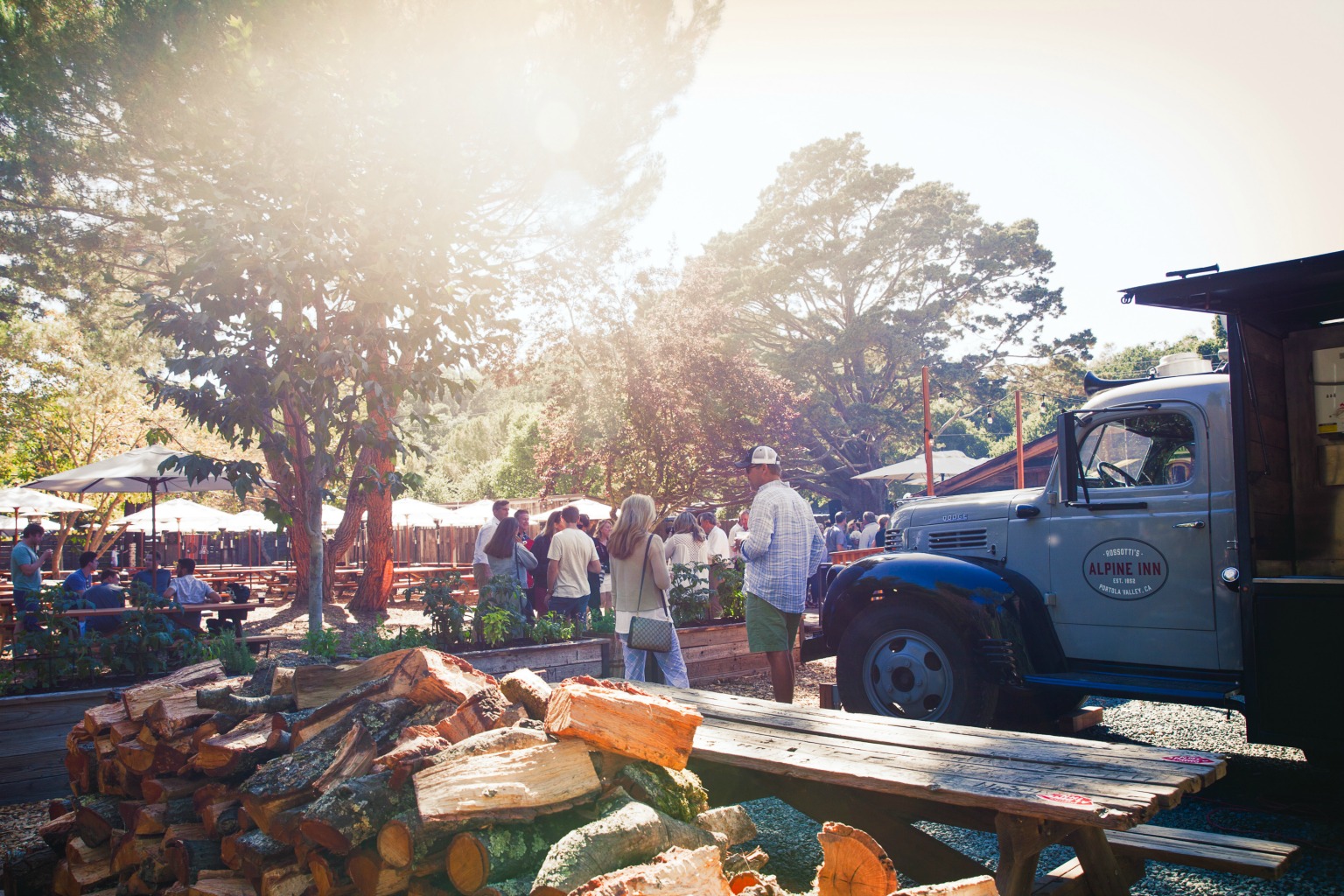 Lori has gone to great efforts to discover and share the treasured lore of the roadhouse. One of her favorite stories comes from Enrico Rossotti’s daughter Margaret Beltramo, who recalls that she and her sister collected 50 cents from each car entering the picnic area. In an effort to avoid the fee, regulars used to park out on the road and pile as many as possible into a single car.

The picnic area has also been restored—an old building was removed so that the new picnic tables now overlook the creek—a shout-out to the picnicking traditions of the Schenkels and the Rossottis. “There aren’t many places left that are honestly casual with a beautiful outdoor setting like we have here,” Lori notes. For those who are missing Peninsula landmarks such as the Oasis, the Peanut Farm or Jan’s Valley Inn, Rossotti’s Alpine Inn brings back a beloved (but thankfully not completely bygone) era.