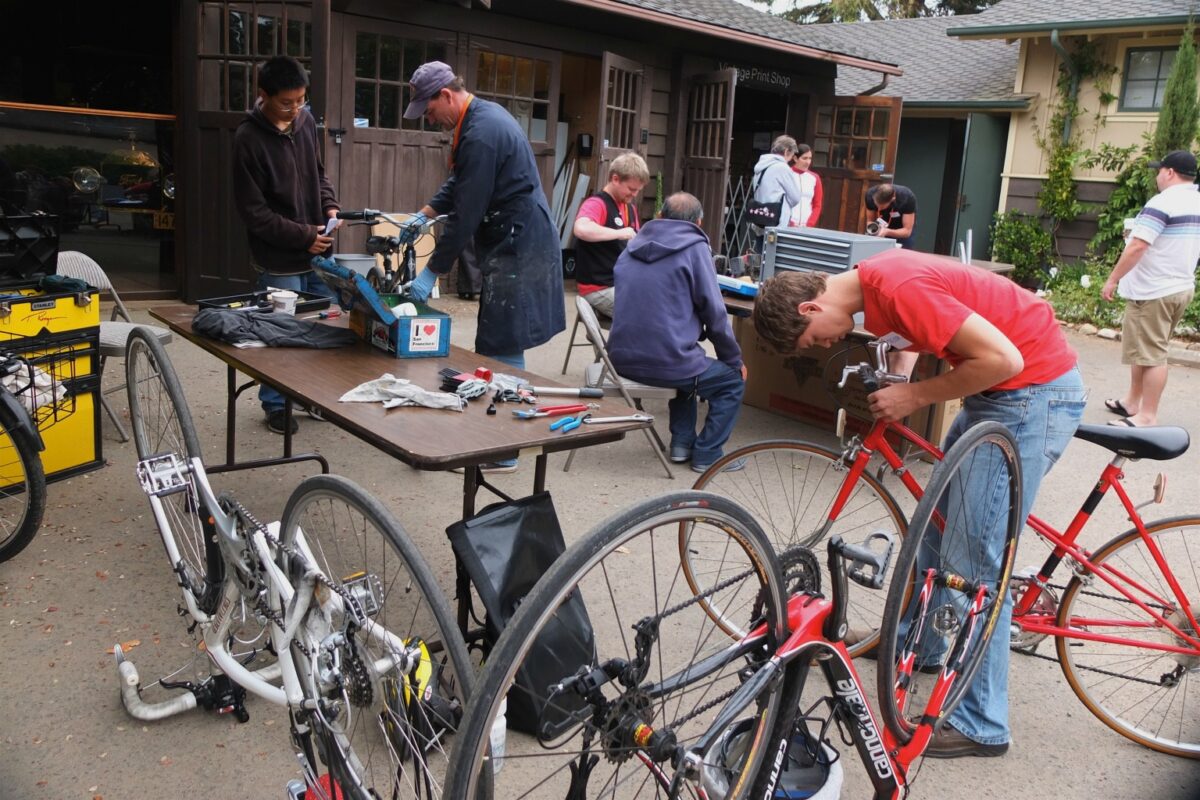 Don Van Creveld has seen this mixer problem before. He opened the KitchenAid’s housing and detached the electrical connectors to expose the nuts anchoring the motor. A few expert turns with a socket wrench and the mixer came back to life, whirring vigorously.

Van Creveld, manager of a medical instruments repair business, spotted a misaligned pin in the mixer’s tilt mechanism. He pointed it out to Sela Berenblum, a Stanford chemical engineering student assisting him. She coaxed the pin back into place with a hex wrench.

The repair team slid the mixer back across a table to its owner, Tim Showalter of Newark. “I hate throwing anything out,” he said, relieved. The trio arranged themselves behind the KitchenAid, grinned and snapped selfies.

All around them at Palo Alto’s Repair Café, work was in progress on dysfunctional devices. A pod coffee machine was gunky with hot chocolate. A wall clock wouldn’t tick. A bike didn’t brake. All were being tended to at no charge by skilled volunteers. Repair Café (repaircafe-paloalto.org)is a quarterly pop-up event that aims to take a bite, however small, out of the 254 million tons of stuff that Americans discard each year. When things fade, loosen, weaken, clog, stutter, stagger or quit, they are typically consigned to a landfill. Peter Skinner wants to change that. He launched Palo Alto’s Repair Café in 2012 after reading about the movement, which began in Amsterdam in 2009.

Fixes can be as quick and simple as correctly installing batteries. Or they can stretch into hours-long slogs that end with a rueful shake of the fixer’s head. Skinner estimates that around 65 percent of items leave in better shape than they arrived.

This spring’s Repair Café attracted about 150 people, most from tony places like Palo Alto and Menlo Park. Replacing a broken curling iron is no financial hardship for these people. Repairing it rather than junking it, however, is “so Palo Alto, so California,” said Susan Barnet, an etymologist from Menlo Park. Fixers make no value judgments about the worth or value of what they’re fixing. Jim Wall—an engineer and president of Palo Alto’s tiny Museum of American Heritage, which hosts the Repair Café—and software engineer Antariksh Bothale devoted more than an hour to fixing a leak that had sidelined a 60-year-old Waring drink mixer.

The mixer’s owner, who waited in line for nearly an hour for a consult, could have replaced the vintage Waring with an identical model for $16 online, a retro treasure described by the Etsy seller as “mid-century Danish modern.”

Bothale and Wall easily disassembled the mixer to expose a peppy metal motor in fine condition. “A lot of things you can’t even take apart,” Bothale said, pleased. “That’s a little sad. You should at least be able to take it apart.”

Nearby, a pencil sharpener met a different fate. Ann Lemmenes’ husband, a teacher, had purchased the X-Acto sharpener less than a year ago. His fourth-graders complained that it pointlessly devoured pencils. “It was expensive,” Lemmenes said, “and he was really heartbroken when it stopped working.”

Bill Wall, a retired appliance repairman (and no relation to Jim), removed the cover and probed the plastic innards. “These two pieces should’ve been made of metal so they could grind against each other,” he concluded.

Wall broke the bad news to Lemmenes, who winced. “It’s got to be really dead before it goes out the door,” she said. She pondered her options: Consign the functional but ineffective sharpener to the landfill? Return it to the classroom? Buy a more expensive metal model?

Wall boasted that he’d had a 90-percent success rate at a prior Repair Café, making listless vacuums suck and flickering lamps light. “At work, I fixed everything,” he said. “The dispatchers told me, ‘You’re not our fastest guy, but when you do a job, we never get call-backs.’”