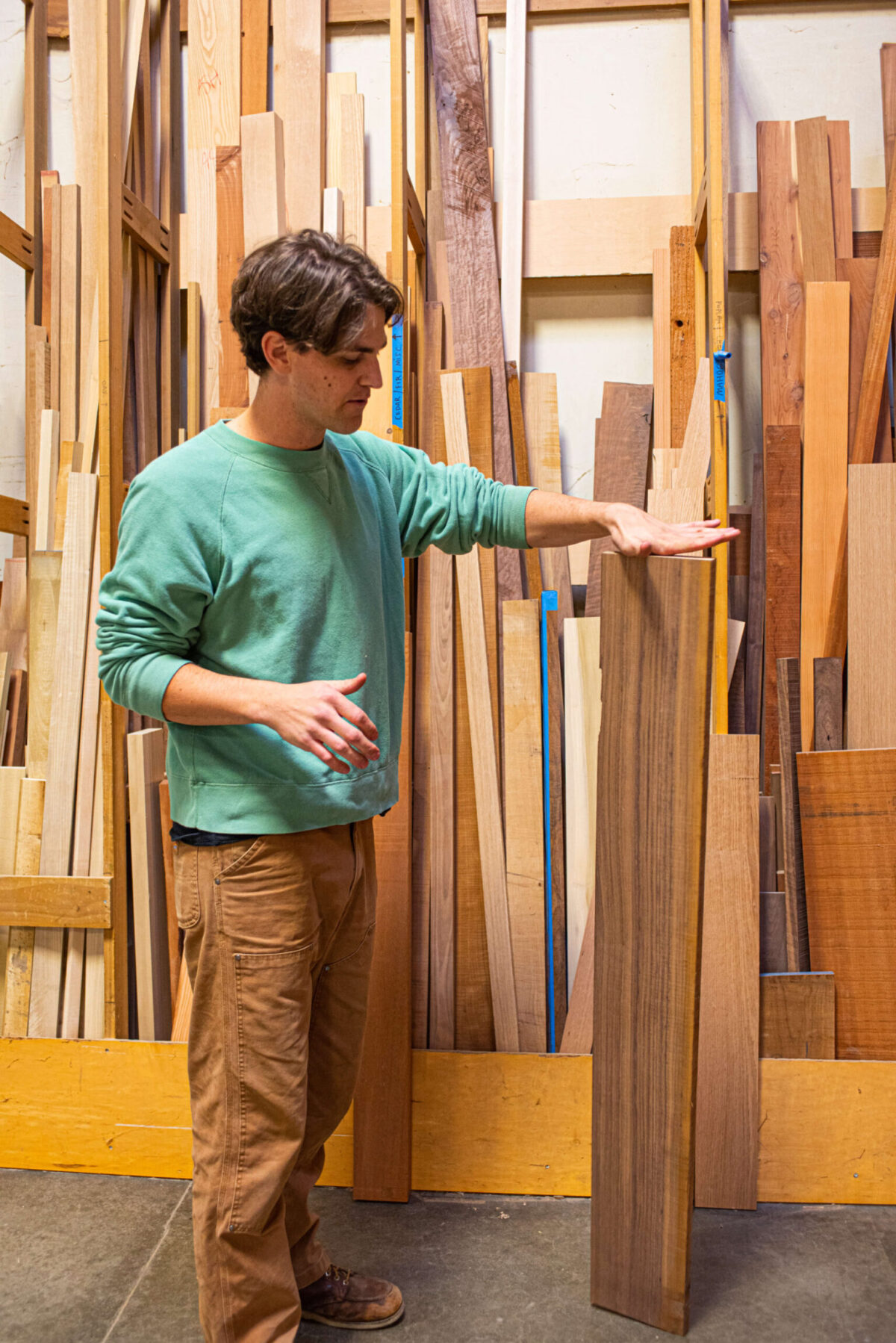 Stowed in a small crate that he tucks within his black and sawdusty workstation is Tait Detro’s special box.

He burrows about to produce a block of mesquite, shaped like a wedge. The woodworker says he found it while traveling in the Southwest where he also purchased one of the rarest and most expensive timbers around: the desert ironwood. He lifts it out of the box with reverence.

Tait proceeds to thumb through slices of a pear tree. Next is a square fragment of bloodwood, aptly titled for its naturally red coloring, followed by remaining blocks of ash, remnants from a coffee table that he recently finished.

Identifying and describing each piece, Tait is in his element as he stacks these chunks of exotic lumber upon his knee.

“The aim with these woods, and the reason why I keep them, is to use them as tiny accent pieces. For instance, I used some wenge as drawer pulls in a desk I made. It has a nice, rich color but it’s also hard—which is what you need since you interact with a drawer pull,” he explains while assembling a display of these precious materials.

“I use this box sparingly and as carefully as I can. I value it. This wood has to be used responsibly.”

Equipped with a vision and guided by devotion, Tait designs and builds fine furniture as the sole pair of hands behind Potaito Fine Furniture. In the less than two years since he began, Tait’s produced around 20 pieces of furniture including a desk, dining table, writing desk and a chair inspired by the 1950s Danish designer Børge Mogensen.

He works on commission—past clients include corporate Google and a chic hotel and restaurant on Long Island—and sometimes Tait works out of necessity; such as when he moved in with his girlfriend and they needed a coffee table and a spatula.

Potaito (pronounced like the starchy vegetable) is both whimsical and a play on his first name, continuing a nickname he’s had throughout his life since friends and his two older sisters often call him Taiter or some variation.
“I lean into it,” he says. “I don’t want to come off as pretentious and a lot of fine furniture can be—especially with the price tags. It’s a good indication of what I want my furniture to be about: approachable and fun.”

Tait adopted an early affinity for lumber as a boy raised among its stacks. The Los Altos native’s father, Tod, is the owner of the East Palo Alto-based Knotty Hole Woodworks, a cabinet shop specializing in high-end custom cabinetry and millwork. Tait’s summers were spent at the warehouse in between his years at St. Francis High School in Mountain View and then San Francisco State University.

His first foray into his own professional woodworking endeavor was in 2015 when he launched Potaito Boards, skateboards Tait made using locally sourced and reclaimed wood. Some of the boards he made were direct offcuts from people’s kitchen cabinets found throughout the Peninsula.
In 2019, Tait enrolled at The Krenov School of Fine Furniture at Mendocino College—a reputable and intensive two-year (six days a week) woodworking program. Tait was utterly fulfilled. He’d scrawl quotes from professors in the margins in his notebooks: “Rush slowly,” his professor Laura Mays once imparted.

Each semester concludes by completing a single project and Tait’s first semester ended with a cabinet that he delicately assembled. His mother LaDon now has it and Tait finds himself continuously inspecting and touching it up whenever he visits home.

“The Krenov philosophy is that you’re never a ‘master craftsman’ and I wouldn’t call myself that,” he says. “You’re putting on labels and expectations, and it’s kind of weird. With woodworking, you’re never done learning.”

His process of creation begins with wood but Tait isn’t interested in just any old slab. He’s drawn to recycled wood, pieces that would have otherwise gone to a dump if he didn’t intercept them. He recently saw a post on NextDoor about a fallen tree and came home with a slab of black acacia. (“Having a tree taken out? Call me,” he pleads.)

Designing begins with sketches before he creates a model scale of the project, sometimes entirely out of cardboard. This allows him to lock down the geometric angles before it’s too late to make changes. “You can make a cheap mockup now or an expensive one later,” Tait grins, referencing another quote he learned from school.

He’ll test the sharpness of his chisel by gently scraping against his arm and if a strand of hair slides off, he knows it’s optimal. From there he works alone, off in a corner of his dad’s imposing warehouse. Although he’s surrounded by industrial-sized machines that churn out wood products with speed, Tait steadily turns wood by hand while thin shavings fall to the floor beneath him.

“Not everything handmade is inherently good and not everything automated is inherently bad. If it’s a good design and thoughtfully made, I think that’s good,” he reasons. “I don’t want my furniture to be trendy but something people will own for as long as they care to use it. I want it to have endurance and a long lifespan. I want people to feel like they spoiled themselves.”

The primary focus for his business is to source recycled, domestic wood while accepting new commissions but Tait is looking out even further, envisioning his own woodshop, perhaps in the industrial sector of San Carlos.

Until then, he’s rummaging through the resources found at the warehouse. Leaned up against the wall near his workstation is a stockpile of various slabs, leftovers from Knotty Hole Woodwork projects. Tait sees potential.
He pulls out a strip of white oak where oxidation occurred, creating discolored patches of dark grey.

“They saw this and thought it was no good,” he says while admiring the unique piece, “but when I saw it, I thought, ‘Hey, that’s pretty cool.’”