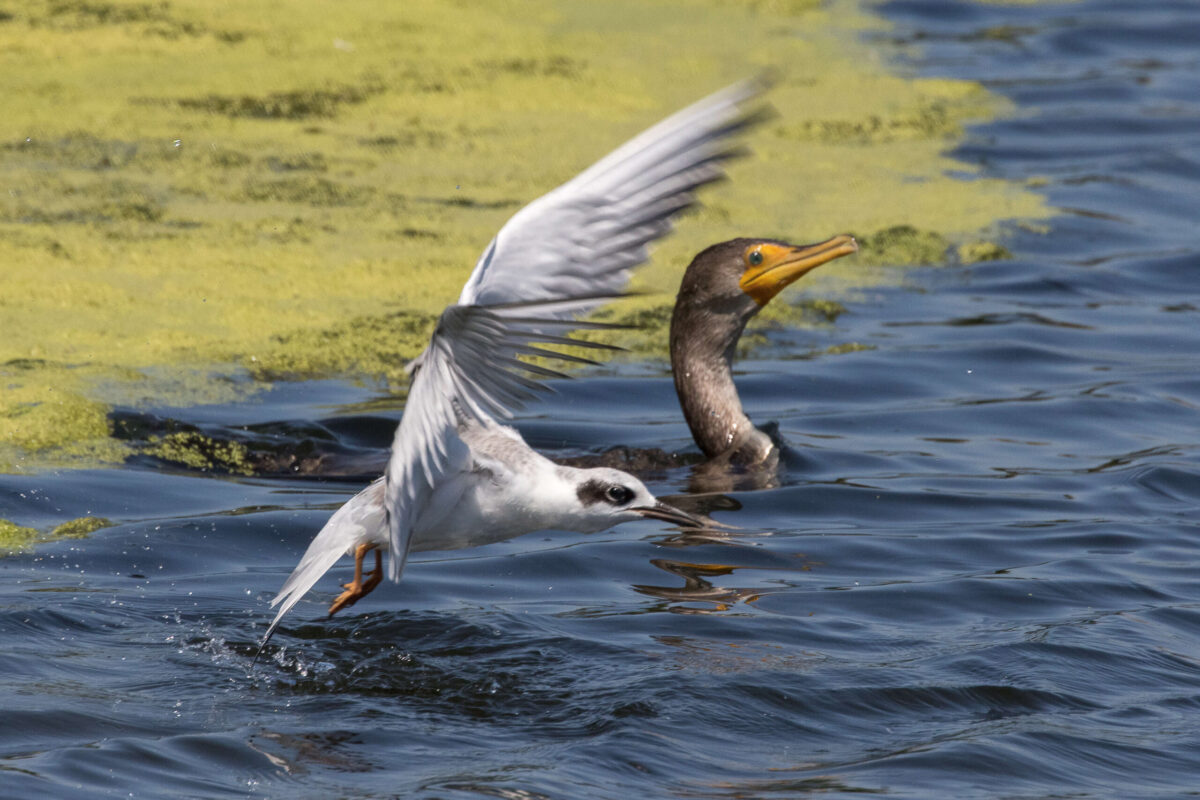 Just 50 feet to the east of the thousands of cars that rumble along Highway 101 each day, Palo Alto’s Emily Renzel Wetlands is hidden in plain sight. The main entrance is a single-car-wide gravel pullout on the side of Bayshore Road, which then requires stepping over a rope fence and crossing a paved two-lane bike path. Nothing visual about the 154-acre marshland suggests that it is of great ecological significance. But much like letting your eyes adjust to the night sky, it takes time to appreciate the magnificent Wetlands: the closer one looks, the more one sees.

“It is much more interesting than a duck pond… oh, green heron!” Matthew Dodder blurts out, interrupting himself to point out the stocky bird with dark green wings and copper throat darting out from the underbrush along the side of the marsh. Emitting a guttural “Scaut!” call, the small heron flies low over the water.

In Peninsula birding circles, the Wetlands are earning a reputation as a hotspot for less common, elusive birds like the green heron. Migrating American white pelicans and terns frequent the freshwater ponds during their winter migration south. Lesser goldfinches and other songbirds flutter amongst the brush. Raptors like the white-tailed kite patrol the large grassy saltwater marsh from high above. 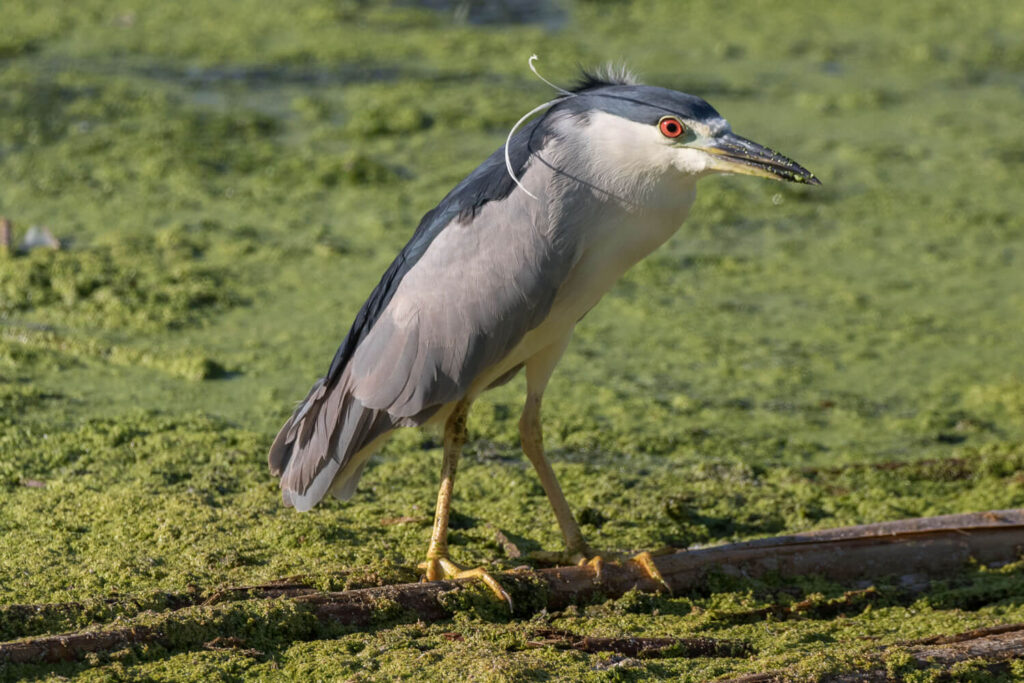 “What I look for is a nice variety of really rich habitat,” Matthew, the executive director of the Santa Clara Valley Audubon Society, explains. “You can come here at any time of the year and find something interesting. If you’re not seeing breeding bird activity, you might see some new arrivals. If it’s the dead of winter and all the migration has stopped, you’re going to have hundreds and hundreds of ducks here of various kinds.”

The birds are just the cherry on top of the Emily Renzel Wetlands ecological sundae. As one embarks farther into the marshlands and the roaring drum of the freeway fades, a plethora of marsh wildlife emerges. Dragonflies of all colors gracefully ride the coastal breeze. Large jackrabbits and raccoons scamper between patches of grass. Ornately-patterned beetles from the stinkbug family cluster on bush branches or reeds. And amongst the pickleweed plants, one of the largest populations of the endangered salt marsh harvest mouse builds their nests. 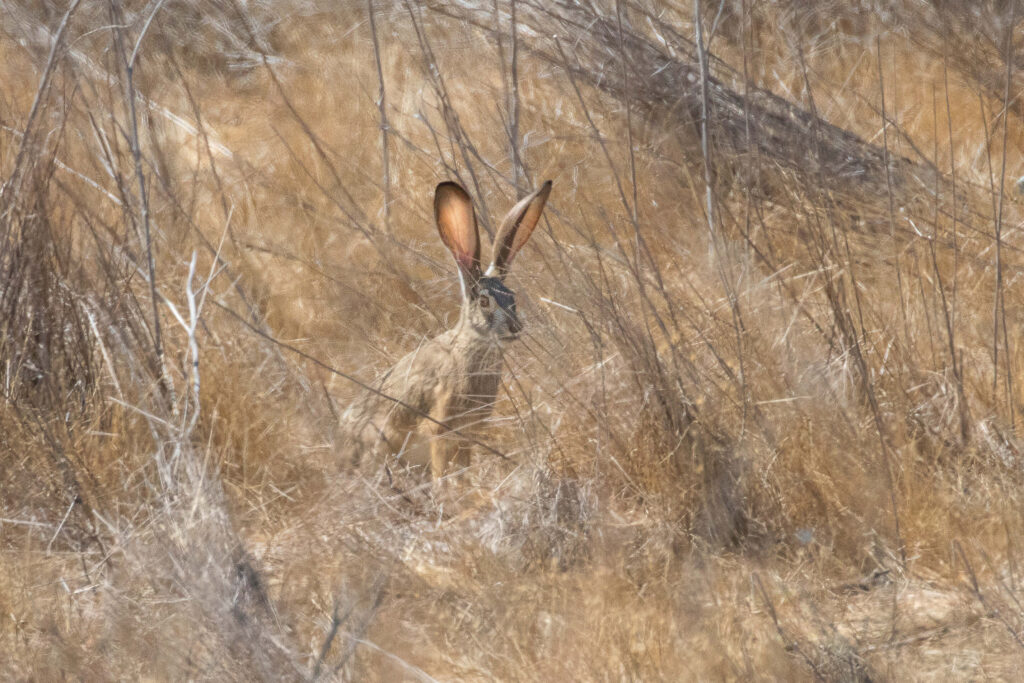 The Wetlands are incredibly biodiverse for the area, thanks to a rare juxtaposition of freshwater and saltwater environments. While walking the trails here, stimulating sights and sounds constantly flood the senses. But restoring the area to what it is today required fierce advocacy and engineering ingenuity, making the existence of this rich habitat even more remarkable.

Today, Emily Renzel Wetlands consists of two sections: freshwater ponds and a saltwater marsh. But when Emily Renzel, a former Palo Alto Council member (1979-1991), was introduced to the area in the 1970s, it looked much different. The marsh was owned by the International Telegraph and Telephone Corporation (ITT), which had set up 200 antennas on the marsh to bounce electrical signals to ships leaving or entering the Bay. Additionally, the Regional Water Quality Control Plant utilized the marsh as a drainage site for treated water.

“People were pretty disrespectful of the natural habitats in those days,” reflects Emily, who has cherished nature her entire life. 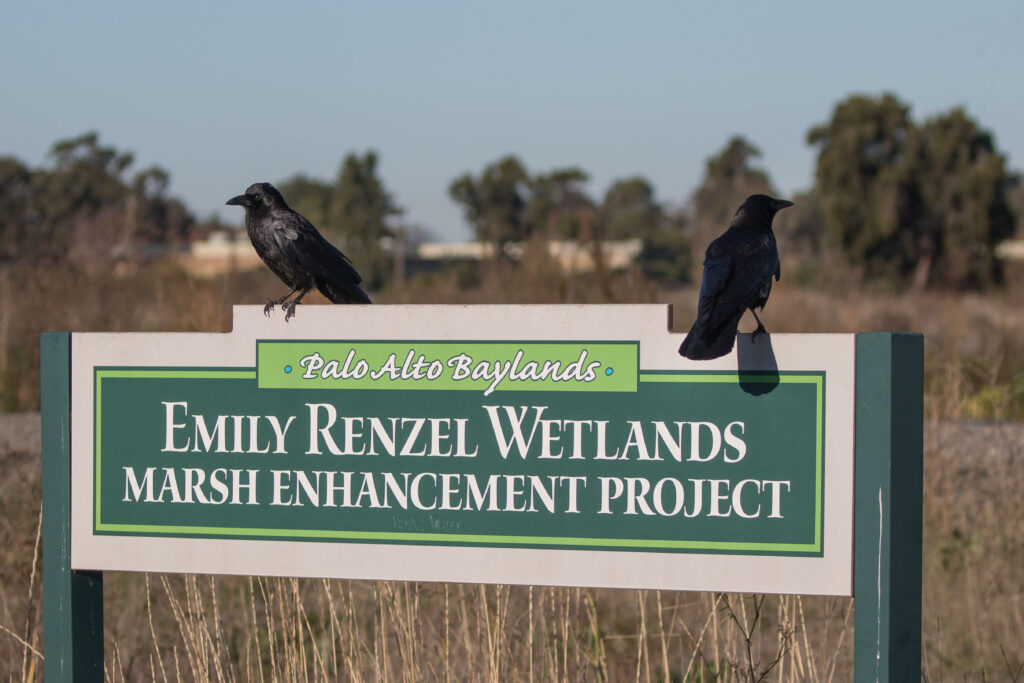 A member of the Sierra Club since 1964, Emily spent much of her professional career advocating for environmental preservation. She fought against and ultimately stopped the dredging of the Palo Alto yacht harbor in 1970. She also created the first Baylands Master Plan in 1978, which formulated the structure of the Bayland Nature Preserve. Her respect for the Bay Area’s natural environments is deep-rooted.

“We had wildlife around us the whole time I was growing up: birds and ducks, raccoons, possums, owls, crawfish,” Emily says of her Coyote Creek childhood home near San Jose. 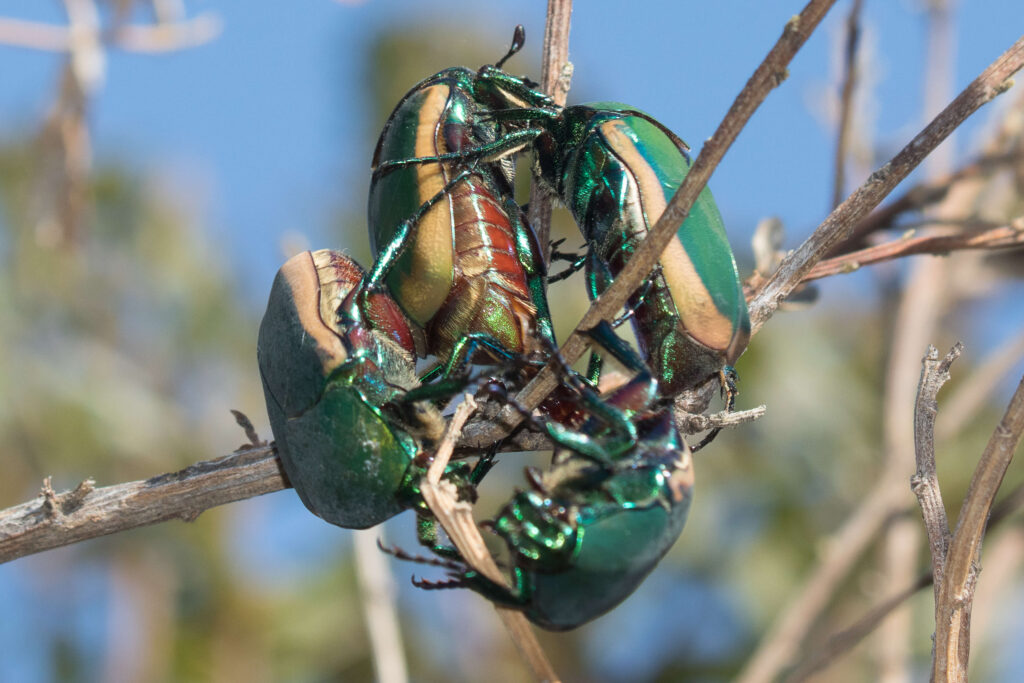 But the wetlands project presented a new challenge for Emily. Because the marsh had been cut off from tidal flows by the landfill (now Byxbee Park), all the freshwater drainage from the water plant had turned the marsh into a biologically unproductive, brackish environment. If the drainage had continued unchecked, Emily believes that the marsh would have converted entirely to freshwater, killing the pickleweed plants and the endangered salt marsh harvest mice along with them.

When the City of Palo Alto purchased the majority of the property from ITT in 1977, Emily saw the opportunity to take action.

“At that time, there was still a lot of pressure to build the southern extension of the Dumbarton Bridge into Bayshore Freeway,” Emily recalls. “It would have come right across that property.”

Working with city engineers and U.S. Fish and Wildlife biologists, Emily spearheaded the creation of a “Beneficial Use” plan for the area. Her plan called to restore the majority of the area to its natural salt marsh environment, while also creating a permanent, separate freshwater ecosystem fed by the water treatment plant. 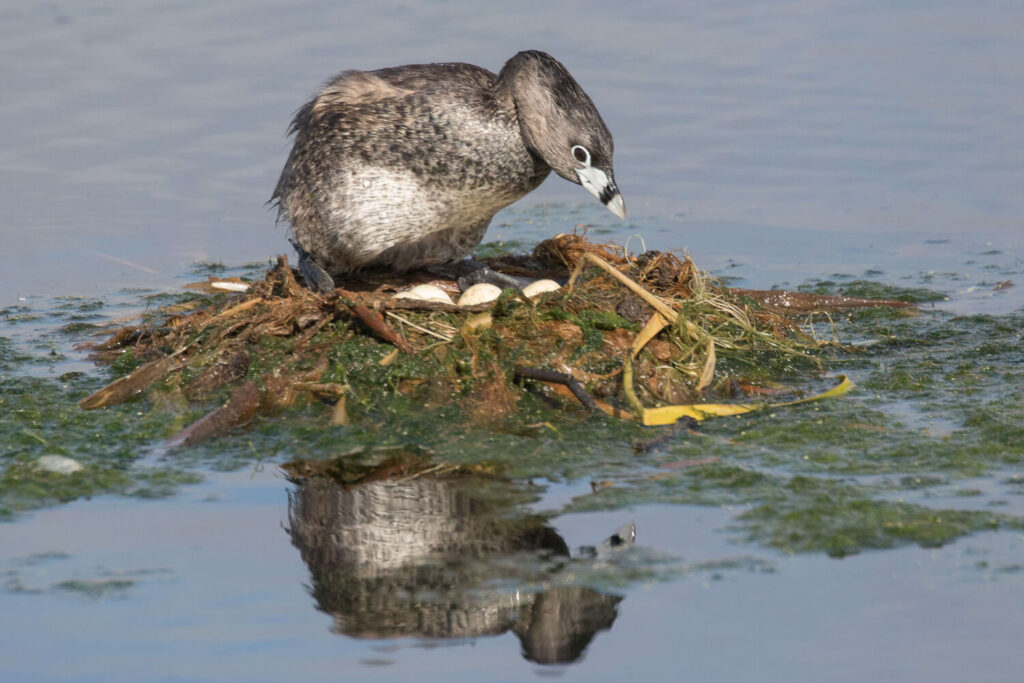 Pulling off this ambitious proposal required some creative engineering. To restore and preserve the salt marsh, the restoration team installed an underground valved pipe system that artificially reconnected the marsh to the Bay, allowing in just enough saltwater to saturate the marsh and fuel plant growth, without drowning the harvest mice and other wildlife. ITT also removed most of its giant antennas, with only a handful, along with the old radio station building, remaining today.

The drainage from the water treatment plant was routed into levied-off ponds near the highway, and both the ponds and the salt marsh drain into Matadero Creek. To this day, Emily says she is amazed by the way the area rebounded. The wetlands are now bursting with ecological diversity—curiously, even fish have managed to populate the ponds over time despite no natural connection to a body of water. The restoration project was completed in 1992 and named in Emily’s honor. Outside of some minor enhancements, Emily’s original concept for the wetlands remains intact.

“The area is bouncing back and seems to be a favorable habitat or it may be the only habitat available to these creatures,” she observes. “I’ve seen whole flocks of pelicans feeding in the wetlands.” 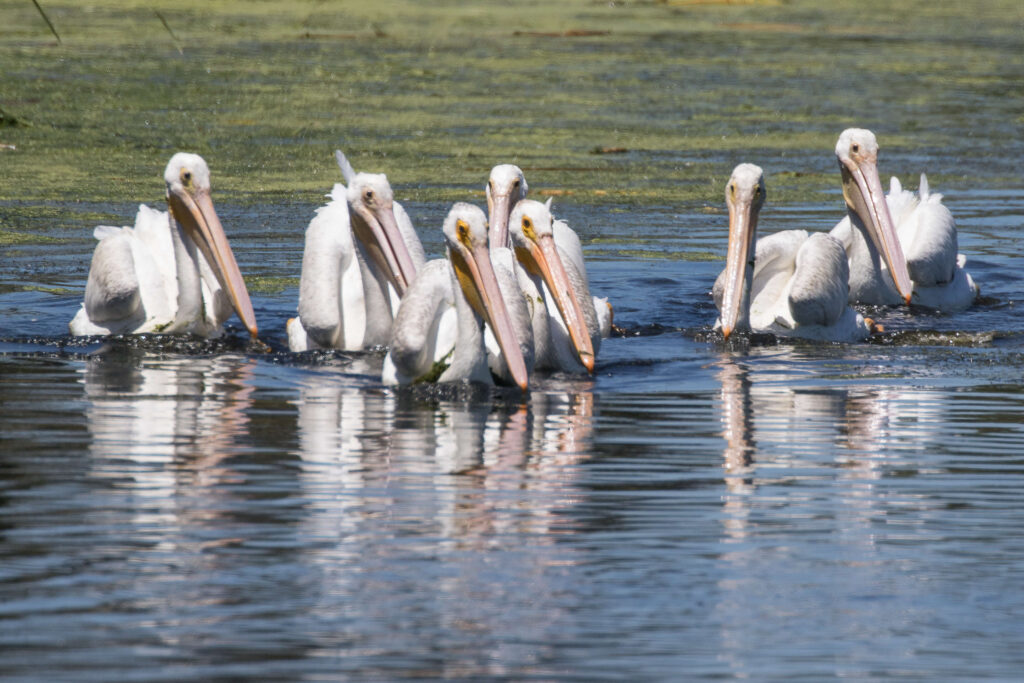 Migrating white pelicans are just one of the many bird species that frequent the area. New public trails around the freshwater ponds create up-close access to this Peninsula birding paradise.

“Because it is a wetlands area,” Matthew says, “there’s a lot of activity here year-round.”

Duck-like, but noticeably smaller than a mallard, pied-billed grebes are showstoppers in their own right. Matthew explains their remarkable talent: by letting out the air between their feathers, they can submerge their bodies while keeping their heads above water. During the late summer and fall, the grebes will masterfully construct floating bowl-shaped nests on the water’s surface.

“They don’t seem to pay much attention to us,” Matthew observes as he passes by a swimming grebe. “They’re feeding, they’re foraging, they’re squabbling—they’re doing things as if we’re not even here.” 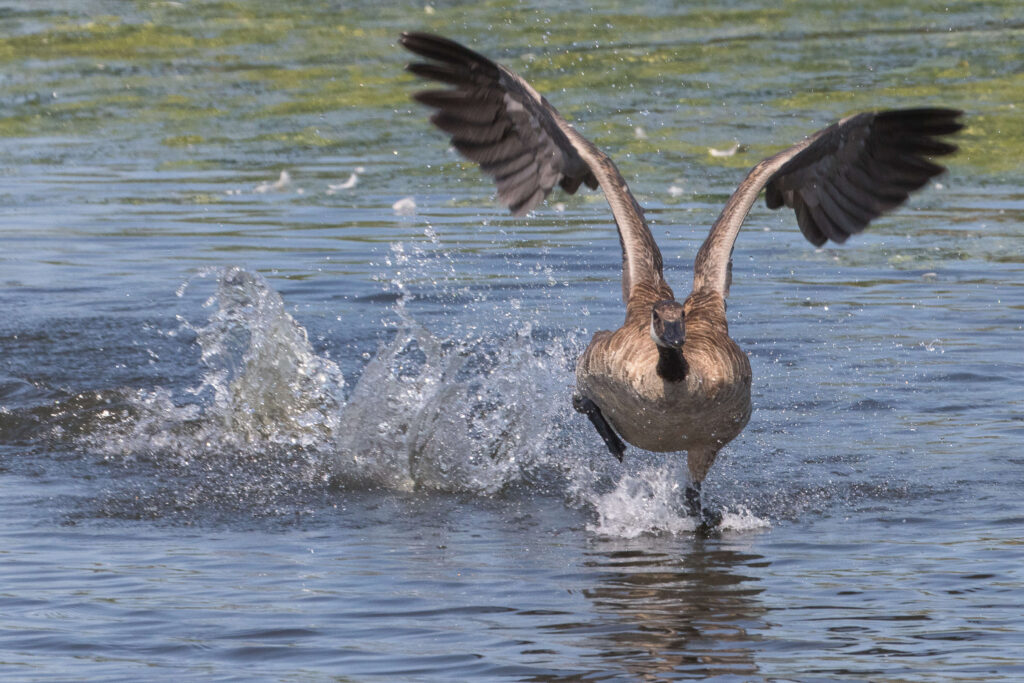 Despite their name, common gallinules are less common in the Bay Area than their close relative, the American coot. Not at the Renzel Wetlands, though: gallinules are plentiful here, brandishing their bright red beaks with dusky black feathers. Their clown shoe-sized feet help them walk over bent reeds and long grasses without slipping and falling into the water—similar surface area physics to snowshoes.

“They feel very comfortable here,” Matthew says of the gallinules’ affection for the area. “I think it’s the abundance of emergent vegetation and reeds. They love these little islands here where they can nestle down and hide.”

Amongst many mallards, an experienced birder also will notice an imposter: gadwalls. They feed like mallards, they swim like mallards and they look like female mallards. But Matthew points out that these lesser-known ducks have a subtle white patch on the middle of their wings, along with an orange bill—two features that mallards do not have.

“There’s a world out there to study,” Matthew says. “I’ve never gotten bored—ever—with birds. Just walking around our neighborhood or sitting around the office with the window open, I’m counting birds all the time.” 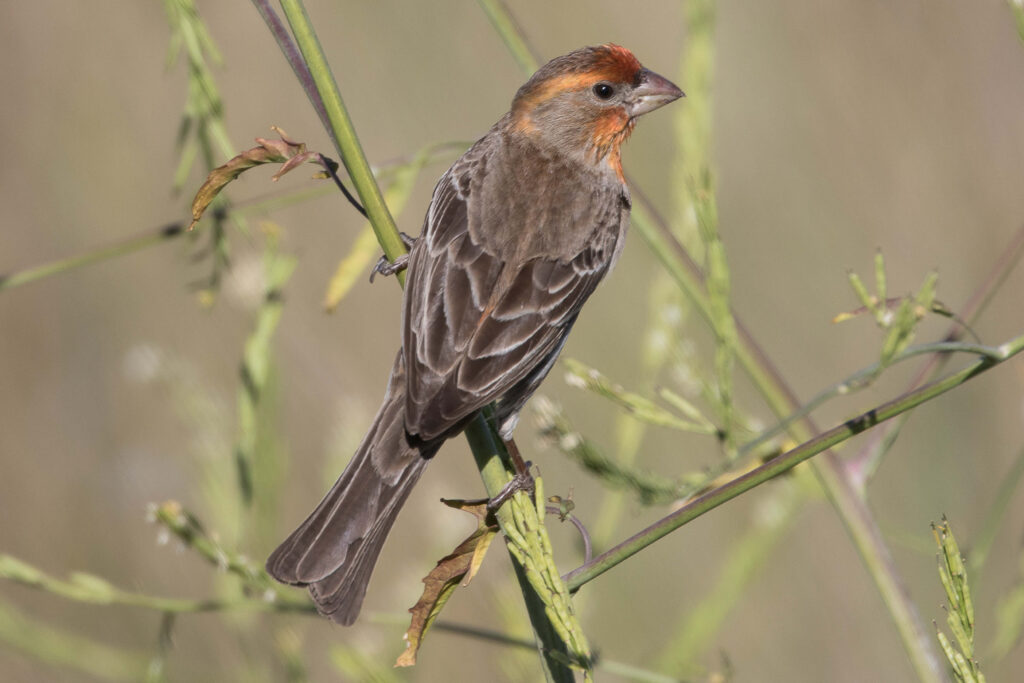 Matthew praises the convenience of Emily Renzel Wetlands. Although not readily obvious to the cars zipping by, with its easy access from 101 and new pond trails, it’s an inviting destination for both birders and outdoor enthusiasts. “Along the trail, you’ve got these nice hedges here,” Matthew notes. “You’ll often find different kinds of sparrows and in the winter there will be more. Right now you have song and Savannah; in the winter, you get gold-crowned and white-crowned and maybe white-throated or something rarer.”

Now dividing her time between Palo Alto and San Juan Bautista, Emily is pleased to see that the new trails are increasing visibility and appreciation of the area, although she hopes that’s the last modification for a while.

“Honestly, I would have left that natural area alone in a better world,” Emily acknowledges. “Hopefully it will be at least another 30 years before anyone has to interfere again in this once natural marsh.”

Stanford microbiology professor and nature photographer Robert Siegel lives minutes from Emily Renzel Wetlands. Here’s his account of a memorable experience from this past summer:

On July 10, 2020, late in the afternoon, I had the extraordinary good fortune to see a baby killdeer hatch. The nest was right in the middle of the walking trail but so camouflaged in the rocks that one could easily step on it. Thinking back, I could not recall ever having seen a chick hatch before. It was certainly not what I expected. It was remarkably fast—a few breath-stopping minutes. The chick did not peck its way out. A moment earlier, the egg seemed intact. Then the mom cracked it open, removed the shell and flew off with it. I did not see where she flew. I was fixated on the chick—watching it, photographing it. At that point, I was alone with the chick and its recently hatched sibling. The hatchling looked like a disorganized pile of feathers and legs. I was not even sure it was alive at this point. In a flash, metaphorically speaking, the mom returned and settled back down over the chick.

In fairly short order, the chick staggered to its feet. Killdeer are precocial, which is to say, they can stand up and start feeding soon after they hatch. Like chicken hatchlings, mom watches over but never feeds or grooms them. As the light began to fade, I departed but returned the following morning to try and find them. They had not left a trace, but eventually, by looking and listening for the parents, I found the chicks, hunkered down and hidden by the spillway. I was hooked. I returned every day for the next two months. Each day brought new changes in physical appearance and behaviors. It was like a biology course in miniature.

Because killdeer hatch with mere nubbins for wings, they did not wander far and were fairly easy to find at first. However, after a number of weeks, their wings grew more spectacular and one day they were gone. But soon, I heard them again. They had relocated to the nearby slough. As before, they allowed me to get quite close. I visited the slough daily and the killdeer would approach me within five or ten feet. I imagined that the killdeer had imprinted on me, but then I realized that I had imprinted on them. With the coming of September, the killdeer appeared less frequently, and I realized it was my turn to fledge, to wander off in search of other wonders of the wetlands. 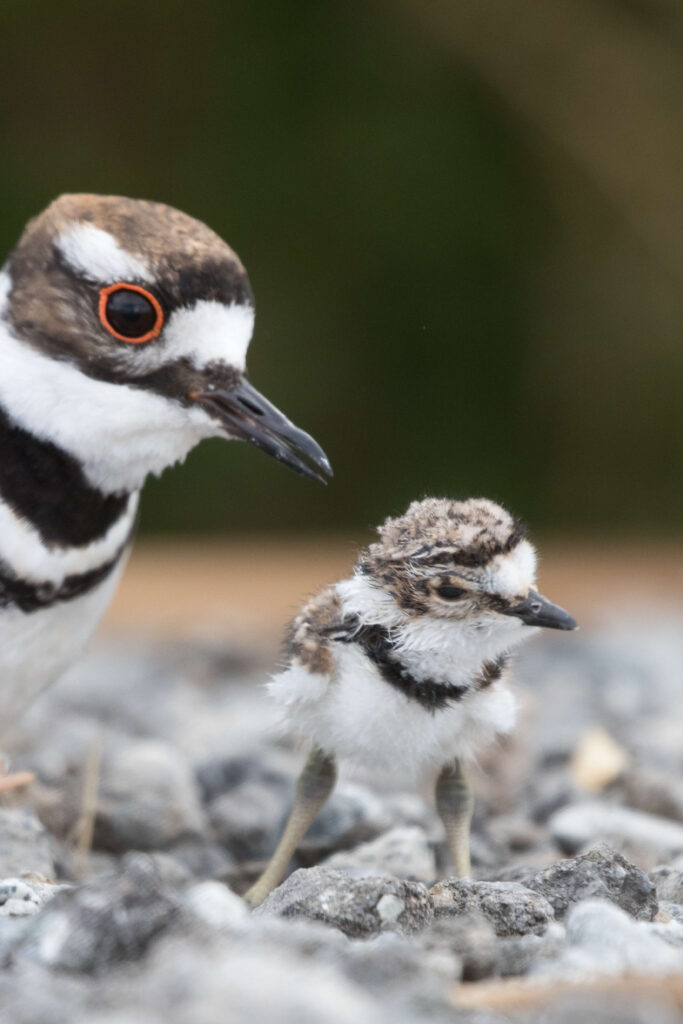