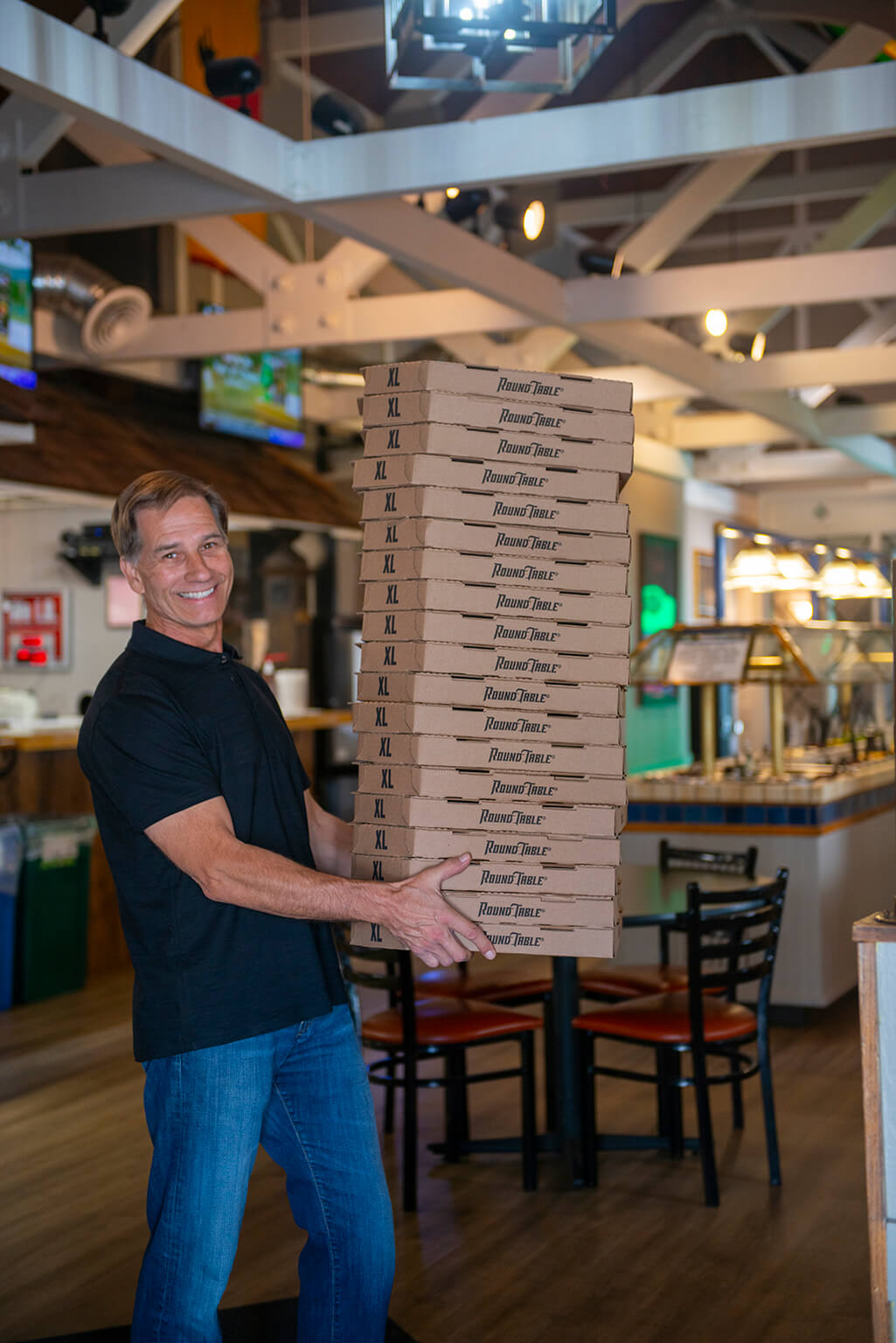 Some people preserve memories through photo albums. Some through home videos. Bob Larson has a pizza parlour.

As son of Round Table Pizza’s founder, Bill Larson, Bob has served as franchisee of the original Round Table Pizza location, situated in Menlo Park’s downtown, for decades. He also acts as its unofficial museum curator.

The historical hints here are subtle but everywhere. A pair of engraved redwood posts salvaged from the building before its remodel. Two original tables. A hulking sign from the chain’s headquarters, now serving as the bar under eight gallons of epoxy. There’s something deeper than food service going on here. 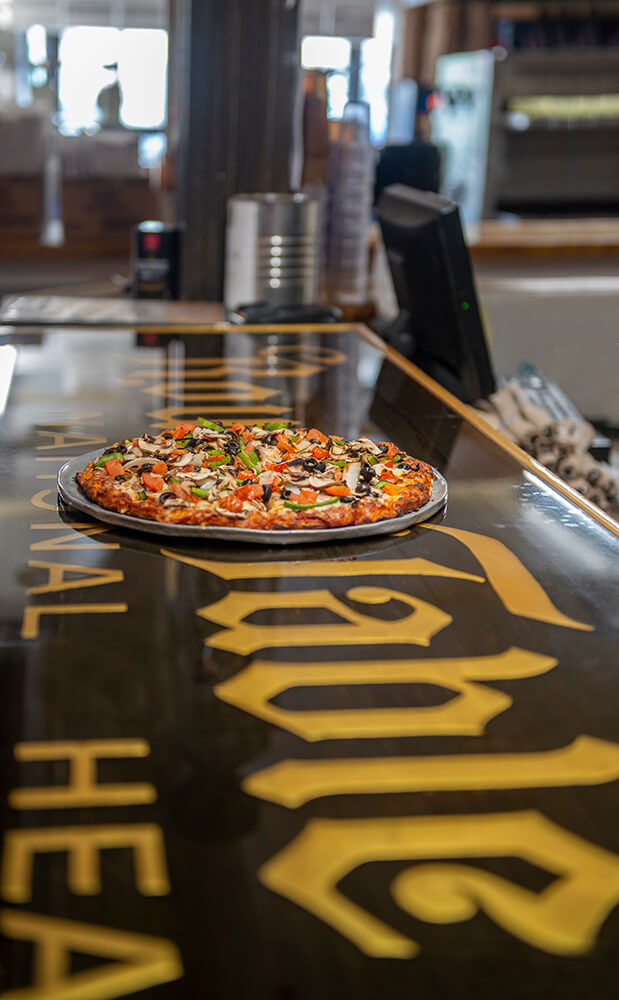 Though Bill has passed away, in this place he lives on (and not just because an oil painting of him smiles benevolently over the entrance like the patron saint of pizza). Memories have been woven into its fabric and no amount of money can coax Bob to part with it (though people have tried, offering him as much as $20 million for the prime patch of real estate). But you can’t put a price on a memorial.

“I look at it now as complete preservation,” Bob remarks as he surveys the memorabilia he’s lugged out of storage to share today. These artifacts range from 60th anniversary champagne glasses to old restaurant napkins, a stuffed dragon named Montague (who, legend has it, stoked the pizza ovens) to binders stuffed with yellowed newspaper clippings and old photos. Each relic represents another page in the story of a father and son.

Bob slides over a cloth-bound notebook, its pages coated in his father’s old recipes, ingredient orders and restaurant-related doodles. “You can almost see his mind working,” Bob muses, tapping a sketch of a rounded dining table.

He describes his dad’s varied career path—first as a U.S. Navy sailor at 17, then a Safeway manager and a Coca-Cola delivery man. After a year at a local pizza parlor, Bill determined it was time to open his own place. 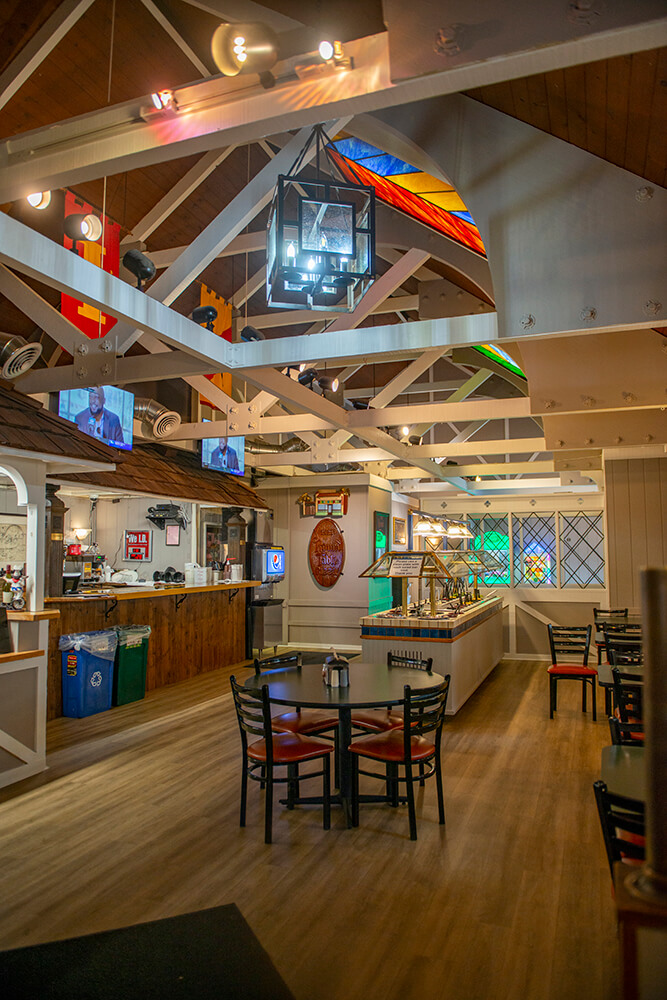 Strapped for cash, Bill needed a loan. For that he required collateral. “My dad took my grandparents’ furniture,” Bob says. “They were out of town, and he threw it on a truck.” This he ferried to the bank as a guarantee that he was good for the money. It earned him a $2,500 loan. Round Table officially opened in December 1959. In those early days, Bill couldn’t afford a 15-foot dough-rolling table employed by most parlors, so he improvised—taking the oak front door off its hinges and using that as a workstation.

As business boomed, Bill remodeled the original location on El Camino with a Dutch-style building similar to the structures in Solvang (California’s “Little Denmark”). He spruced up its interior with castle crest banners, mosaic tile artwork, trestle accents and stained glass skylights.

Bob, in turn, joined the family business at the age of 12. “I remember showing up on my bike, saying, ‘I’m here to work,’ and the guys being very skeptical,” he recounts. How did they handle the owner’s kid? “I was given the worst jobs,” he chuckles of his time scrubbing bathrooms and scraping chewed gum wads off the undersides of tables. “But I never complained.” From among his artifacts, he plucks a bow tie—part of the uniform back then. “This one even has sauce on it,” he observes, pointing out a faint speck of red.

As time passed, Bob worked positions as a prepper and roller. With pride, he recalls the good ol’ days when he regularly singed off arm hairs shoveling pizzas into ovens and showing up to parties with flour in his hair.
But it wasn’t all sunny days for Bob. His dad fired him at 19 for shirking his responsibilities. Even so, he didn’t hang up the apron. “I knew what I wanted to do,” Bob asserts. “I wanted to be a pizzaman.” He earned back that trust, proving himself at another pizza place, before being invited back into the Round Table fold. “It was on my terms,” he reflects, “and I had grown up.” 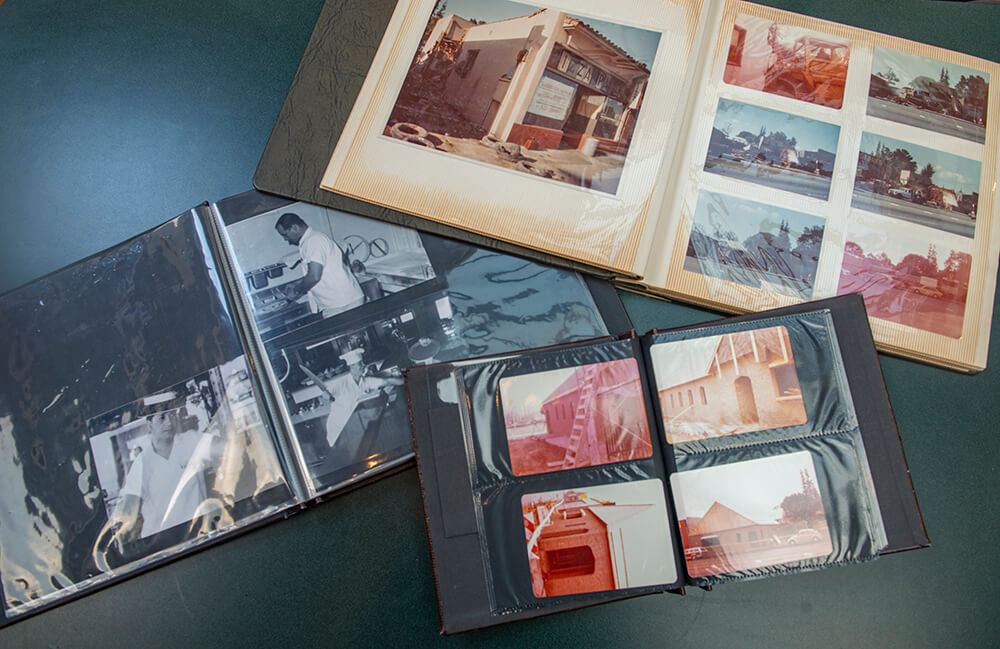 Bob shares that his dad underwent his own transformation as a high school dropout. “I felt a lot of people doubted me when I was younger… and my dad was pretty much the same,” he says. Though Bob didn’t know the details of his dad’s expulsion, a classmate of Bill’s revealed to the InMenlo.com blog that it was over a prank in which he let the air out of a police car’s tires.

“My dad wanted to prove to everybody that ‘I’m gonna make something of myself.’” And 400+ restaurants later, no one’s arguing. “I’m completely about redemption,” Bob affirms. “Kids go through stuff. It doesn’t make them bad people.”

After a stint as manager, Bob bought the original store from his dad in 1987. “I paid 15% interest,” he notes. “My dad was never about just giving anything away. I had to work for it.” For a time, he also swapped out his shirt and bow for a suit and tie, sitting on the board of directors and providing an insider’s perspective “from the front lines.”

Bob has continued marking milestones here, hosting countless Little League groups, birthday parties and even the Stanford band. And then there’s that time he supplied 500 pizzas for children performing in the Super Bowl halftime show. “I had to call all my buddies who had Broncos, El Caminos, station wagons,” he recalls. They crammed a small fleet of pizza boxes into back seats and trunks. 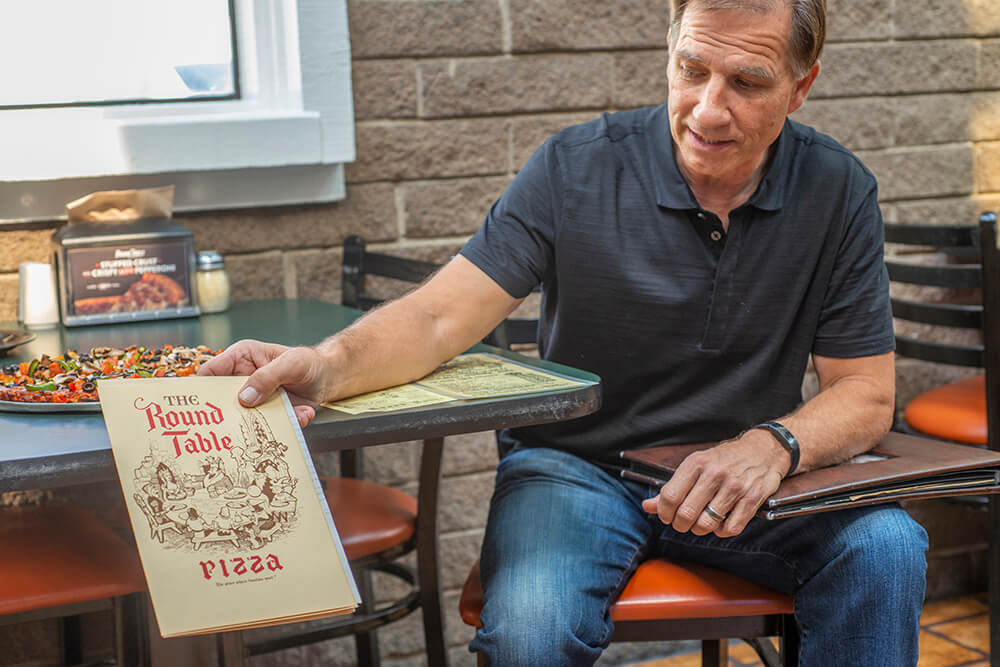 Bob’s Round Table also supported Menlo Park in the aftermath of the Loma Prieta earthquake. For several nights, the block was a solid stretch of black—except the pizza parlor, shining like a beacon. The restaurant was on the same circuit as the fire station, so people flocked to the store like moths, filling its tables and sitting in groups on its floor. “I looked over at the bar and there were people doing dishes and people serving coffee who didn’t work for me,” he marvels in retrospect. “Those are the things you don’t forget.”

Even today, Bob sometimes pops behind the counter to tend the oven. “I have a problem letting go,” he admits with a sheepish smile. That said, he will never cease taking pride in his pizzaman profession. “I can go around town with you and say, ‘See that guy over there? Pepperoni, green pepper, mushroom. That lady over there? Gourmet Veggie.’”

And, of course, Bob will continue to act as a keeper of memories. After all, if we can preserve the tales of a mythological king and his fellowship of knights, why not the legacy of a gallant pair of local restaurateurs?