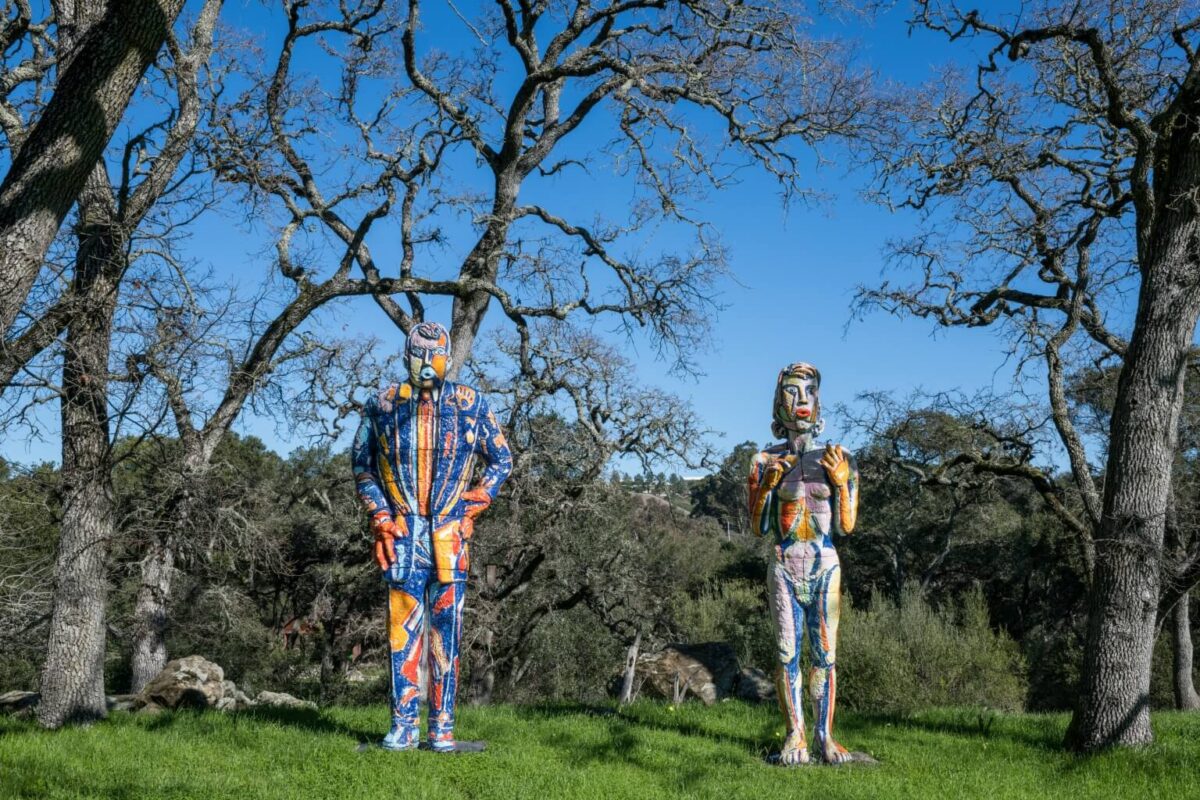 In the hills of Woodside are 100 acres of what appears to be open space. From the vantage point of Cañada College or driving by on 280, you see wide expanses of green fields and small forests. There are no visible buildings, but if you look closely, you catch flashes of man-made shapes—a black circle and a rust-colored angular structure—hinting that something else is back there. What you’re getting a glimpse of is a vast collection of sculptures that have been carefully curated and intentionally placed. This is Runnymede Farm.

Bought in 1930 by John (always called Jack) Rosekrans and his wife, Alma Emma Spreckels, Runnymede Farm is still owned by the Rosekrans family. Alma was the daughter of Adolph and “Big Alma” Spreckels, a wealthy socialite and patron of the arts—often referred to as the great-grandmother of San Francisco. When Jack and Alma purchased Runnymede Farm, Woodside was a popular locale for the country estates of prosperous San Francisco residents. While it had a few churches and a school, it was mostly farms, small cattle ranches and vineyards—Runnymede Farm itself was covered in old vineyards and included an old dairy barn that still stands. An accomplished equestrian, Alma competed and excelled as a jumper. The property became home to her many horses, at one time housing more than 50 jumpers and breeders.

Alma outlived Jack, who died in 1966. When Alma died in 1983, she left Runnymede to her three sons, John, Charles and Adolph. Today, it is still family-owned, by Adolph and his two children, Kate Rosekrans Duininck and Spreck Rosekrans, and John’s sons, John and Peter Rosekrans. The property has a number of buildings, but they are tucked away and largely hidden by the many oak trees that Alma cultivated. While the horses are gone, Runnymede Farm is now home to a collection of outdoor sculptures—a staggering number of them, as in over 100.

The sculptures were the passion of Alma’s son John, and his wife Dodie. Inspired by a trip to Storm King Art Center in New York State in 1984, John was enchanted by the possibility of blending and harmonizing sculpture with nature and began his collection. The selection criteria had more to do with what the Rosekrans couple liked, rather than the value of the art as an investment. According to Peter Rosekrans, his father’s first installation was an abstract figure by Belgian sculptor Jean Coenen called Androgyne—a bronze figure that’s nestled close to the buildings near the front of the property. Among the significant collection, noteworthy sculptures include a 1994 installation by Andy Goldsworthy, who is known for creating site-specific sculptures, each of which “grows, stays, decays.” At Runnymede, Goldsworthy created a semi-permanent work: a collection of clay pots, some of which are reminiscent of an open beehive. They were created from the clay on the property, which was processed on site over a period of months by a crew of young artists. As was expected, in the drying and firing process, the Runnymede clay cracked and broke. Goldsworthy placed the imperfect pieces in and around the soil on a hillside at Runnymede. Some of them are almost completely buried. It’s hard to know how much decay has taken place—the art is often covered in moss and lichen. One day, the pieces will return to the land from which they were formed, just as Goldsworthy intends with much of his work.

California-born Charles Ginnever is also well represented, with multiple sculptures installed over more than a decade. Ginnever is known for his large-scale, open-form work for the outdoors. At Runnymede, some of his creations are nestled among the trees, while another sculpture sits close to the buildings near Runnymede Road. And one of them is the rust-colored abstract sculpture that you can see from afar. Titled Ibis, it sits high on a hillside with the skyline ridge as its backdrop. Typical of Ginnever, the art appears to shift shape as you change the angle from which it is viewed. And while you can see it from 280, the trees surrounding it threaten to dwarf it.

Another piece that is visible from the road is After the Reign by Ilan Averbuch. Heading north on 280, when Cañada College is on your right, if you glance to your left, you can see what looks like a large dark circle on the hillside. The circle is actually the opening of After the Reign, which up close seems like you are looking into the inside of a wooden ship. The interior is natural wood, while the outside is patina-colored. Scale is difficult to see from afar but this work is more than ten feet tall, with its gaping opening facing the highway.

When it came to determining placement, John applied a thoughtful process, often working directly with the artist. Almost all of the art was collected from living artists who were still creating. The sculptures are in open spaces, set along pathways or tucked into natural niches of the land. Some are uniquely situated, such as Ginnever’s Zeus II, which is suspended in the trees; long, yellow beams are shackled together so that if the wind blows hard enough to move the tree branches, Zeus II shifts in response. The size of the artwork ranges significantly. In the woods, several small sculptures create an ever-changing pathway. The giant sculptures usually occupy open space, including the memorable and dramatic Horse Head, also created by Ilan Averbuch. The massive sculpture sits on the edge of an oak grove and surprises you when you come around the corner. Even though it is inanimate, the horse’s wooden mane appears to fly behind its granite boulder head.

Many installations have multiple pieces, and some human shapes are represented, such as Celeste Roberge’s Rising Cairn and Walking Cairn. Rising Cairn is a cage-like container made from welded and galvanized steel. The figure, with one knee on the ground, looks as though it’s about to stand up. Filled with 4,000 pounds of granite, the bent-over sculpture stands almost five feet tall. Nearby, a similar figure is upright: Walking Cairn measures almost nine feet.

With over 100 sculptures, the collection is varied—almost eclectic. Most of the artists are from the U.S., although many European artists are also represented. As with all art, how the works are perceived and appreciated is subjective. Walking the property, you might stand in awe in front of one piece, yet pass by several others with barely a glance. Depending on when you visit, the sculptures look different, varying by the season, the weather and the time of day. Some change with the angle from which you see them, like Ginnever’s, and some change very slowly, as the years pass, like Goldsworthy’s art created from clay.

Zipping past on 280, an art lover with a trained eye can catch teasing, tantalizing glimpses of Runnymede’s wonders. However, public access to the property is usually limited to fundraisers. The Rosekrans family opens Runnymede Farm to a long list of non-profits to which they have close ties, at no cost to the organizations, including Cantor Arts Center, Peninsula Open Space Trust, Woodside Elementary School and SFMOMA. It’s worth keeping watch for any upcoming events. By helping a worthy cause, you may also be buying an insider’s look at some of the Peninsula’s hidden gems.