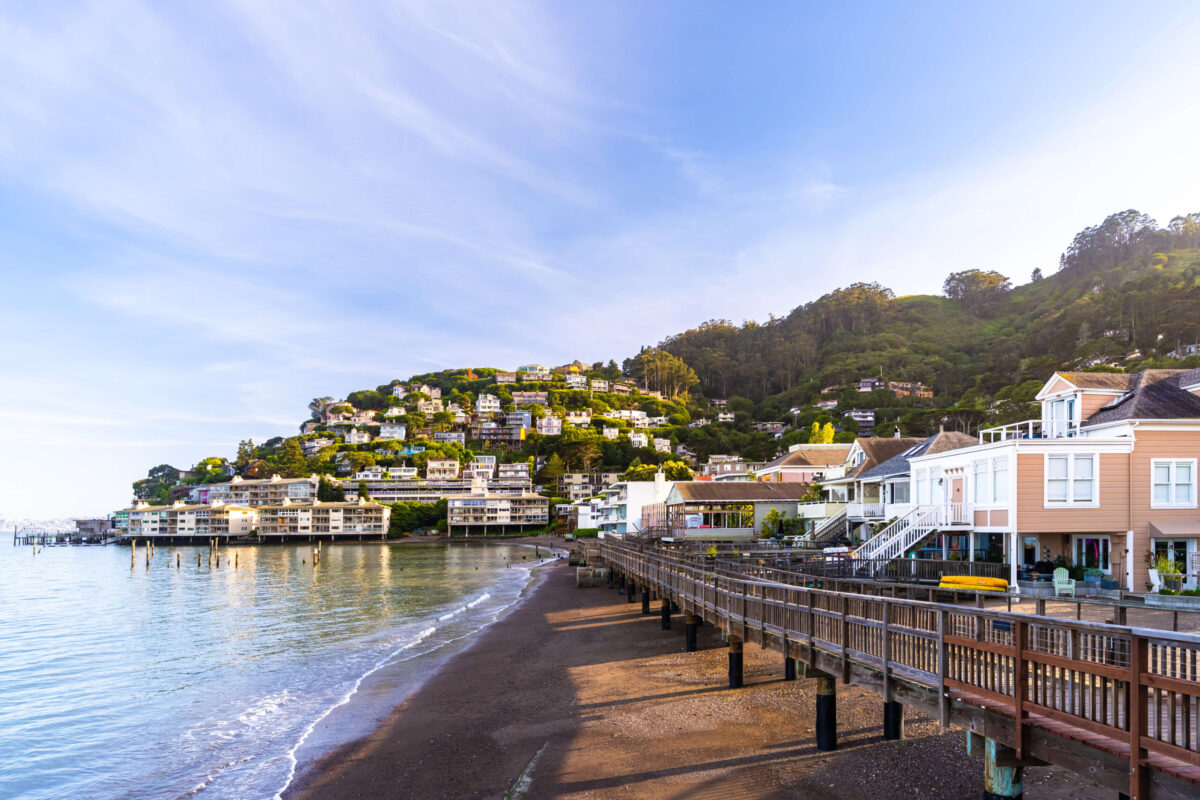 Snuggled up on a cushioned lounge chair on a private deck perched directly over Sausalito’s lapping shoreline, I’m mesmerized by the views unfolding in front of me. Dusk is setting in, and I can just make out the outline of Alcatraz Island as the lights on the Bay Bridge begin to pop against the darkening sky. With a deep contented sigh, I relax into the flickering warmth of the indoor-outdoor gas fireplace next to me.

“All the craziness of the world goes away when you close that door,” observes Kass Green, one of the owners of The Inn Above Tide, a waterfront boutique hotel in this Marin coastal hamlet. “You’re in this magical space with the San Francisco Bay out in front of you—it’s just the views and the calm.”

Despite numerous visits over the years, this facet of Sausalito is new to me. Living in such close proximity, I’ve always thought of the picturesque seaside town as a jam-packed day jaunt, so my curiosity was piqued by the opportunity to experience Sausalito as an extended getaway. Anticipating a weekend of active replenishment, we packed our bags, loaded up our bikes and jumped on 280. Quick trip, indeed. An hour later, we arrived at our destination.

A Stay on the Bay

As a tourist haven drawing visitors from all over the U.S.—and even around the world—Sausalito offers a wide mix of accommodations ranging from historic properties to upscale hotels and spas to quaint B&Bs. For a “Box Seat on the Bay,” you can’t get closer access than The Inn Above Tide, a contemporary luxury hotel built (literally) over the water.

Back in the early 1960s, William McDevitt saw its former incarnation—a machine shop for the ferries and parking lot—and recognized the untapped potential of the spectacular setting. He initially developed the site as an apartment building before opening his dream hotel in 1995. With 33 rooms and suites, The Inn Above Tide is now owned by McDevitt’s children, Kass and two brothers, who evolved the accommodations from nautical quaintness to indulgent waterfront retreat. Every room delivers panoramic views with expansive suites (as large as 1,000 square feet) providing next-level luxury with features extending to furnished overwater decks, intimate dining areas and lavish spa tubs. “There’s this serene blanket that kind of wraps around you when you walk inside the hotel,” says Kass, “but just steps away, you’ve got all of Sausalito—all the great restaurants and cute stores and access to all kinds of activities.”

A forester and cartographer by trade, Kass parlayed her professional background and passion for Sausalito into the creation of an Adventure Map, which captures recommended hiking, driving and biking routes for nearby attractions including the Marin Headlands, Angel Island and Tennessee Valley. “It’s easy to look at San Francisco and stay glued in that direction,” Kass notes, “but I wanted to share that there’s this wildland experience that’s within footsteps of Sausalito.”

To encourage exploration, the hotel offers complimentary use of touring bikes—and there are additional rental opportunities (with and without power assist) at Sausalito Bike Rentals in town. Scenic, mostly flat, stretches abound, including Sausalito’s buzzy waterfront Bridgeway and the 2.4-mile Mill Valley–Sausalito Bike Path. Knowing that we wanted to tackle the Marin Headlands, we brought my e-bike (my source of cycling superpowers) along for the ride.

After winding our way up Alexander Avenue out of Sausalito, we ascend to jaw-dropping vistas at Battery Spencer and Hawk Hill. From there, the 18% “Whoo-Hoo!”-grade down hits like a roller coaster adrenaline rush, banked against cliffside drops to the Pacific. Our ride continues through rolling hills marked by spottings of military bunkers, the Nike Missile site, the Marine Mammal Center, along with Rodeo Beach and Lagoon.

Kass also created a Sausalito Step Walk, a turn-by-turn guide for getting in steps while exploring the fascinating chapters in Sausalito’s history. Initially a small settlement selling fresh water to mariners, the city’s rich lore includes being a bootlegging base during Prohibition, a bustling WWII shipyard, a Bohemian haven in the 1960s, and of course, a timeless tourist destination. Our hike through Sausalito’s hilly neighborhoods feels like a treasure hunt, leading us up hidden stairways, along lush pathways and past stunning homes and mansions, punctuated by countless declarations of, “Wow! Look at that view!”

The San Francisco skyline is omnipresent in the distance, but up close, it’s all about Richardson Bay, the resplendent body of water named for the English seaman who founded Sausalito after receiving a Mexican land grant in 1838. To honor the setting, we turn to Sea Trek, a one-stop resource for stand-up paddleboarding and kayaking, including classes, guided excursions and rentals. After an easy dry launch from a dock, we set out in a double kayak, interspersing bouts of coordinated paddling with quiet moments of floating and contemplation. We find ourselves enchanted by the seabirds soaring overhead, the bobbing heads of harbor seals and the eclectic colors and styles of Sausalito’s houseboat communities. When the sun breaks through the morning fog, we see the clouds perfectly mirrored in the water.

Taking full advantage of our suite with a view, we enjoy our hotel’s complimentary evening wine and cheese and continental breakfast service—with a special callout to the fresh-squeezed orange juice. Given that Sausalito is also known for its chic boutiques and dining, we’re not surprised to discover dozens of restaurants within an easy stroll. Seated on Bar Bocce’s patio overlooking bobbing boats (Sausalito has 13 marinas), we make lunch of a shaved artichoke salad and mushroom pizza with fontina, caramelized onion and garlic. Visit Monday through Thursday and you can play a game of bocce before or after your meal. At Sausalito Bakery & Cafe, we claim a bayfront window nook while we nosh on a tuna nicoise salad and roast turkey sandwich with cranberry and brie.

For dinner, we select Copita, a vibrant modern Mexican eatery and tequileria created by cookbook author Joanne Weir and longtime Sausalito resident Larry Mindel. After our waiter Bernardo talks us through the menu and Copita’s 60 brands of tequila, we clink glasses of red sangria (picking up distinctive accents of cinnamon and cloves) and a Copita margarita, followed by a Maestro Dobel reposado, which will be sipped and savored through the meal. We relish chef Aaron Sabido’s deliciously spiced and tangy mix of seafood in the Coconut Campechano ceviche and tuck into the flavorful Quesabirria (slow-cooked lamb and Oaxaca cheese quesadillas) and Enchiladas de Pollo en Mole Manchamanteles.

During our stay, we also score a table at the award-winning Sushi Ran. Founded in 1986 by famed chef/owner Yoshi Tome, Sushi Ran maintains its reputation as one of the top Japanese restaurants in the U.S. As we sip our selections of warm sake and Japanese whisky, we enjoy a starter of Shrimp & Basil Dumplings before focusing on the dazzling display of fresh fish—a sushi plate sampler (six offerings including nigiri of maguro, salmon, hamachi and ebi) and delectable maki, including a spicy tuna with seven types of Japanese spice.

Walking back to our hotel, we remark that Sausalito’s nights are blissfully quiet. So it’s the muffled notes of live music that draw us into the No Name Bar, a venerable Sausalito nightclub and hangout since 1959. We grab two drafts and find a table to soak up the atmosphere and familiar tunes from Fleetwood Mac and Steely Dan. Knowing that there’s no Golden Gate Bridge to traverse tonight, we settle into the scene, grateful that we’re only steps away from our waterfront home away from home.