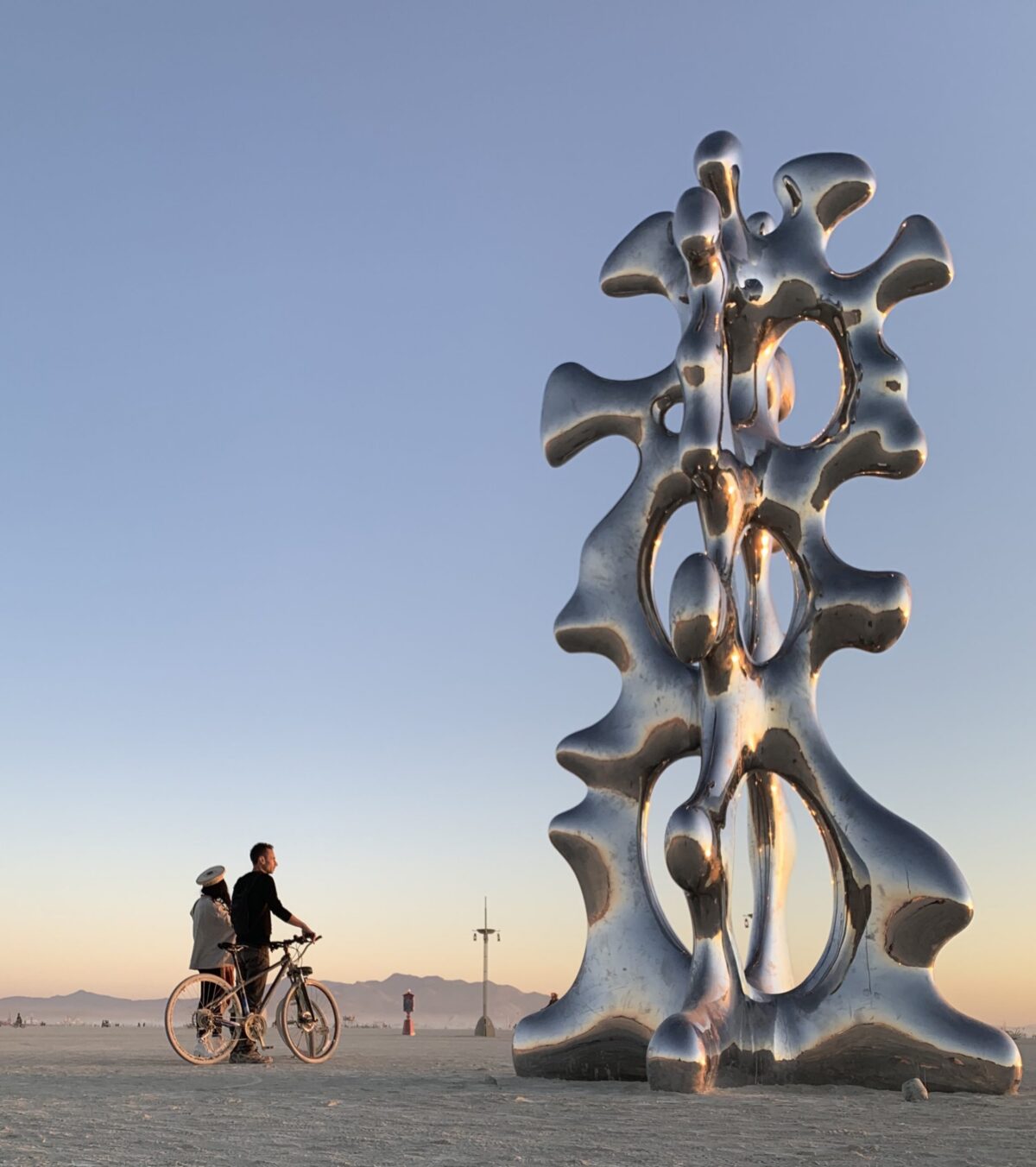 There’s a dry lake in the desert that Oleg Lobykin visits to solicit reaction to his sculptures. Since 2004, he’s attended the annual events there 12 times and in 2019, he debuted the largest sculpture yet from his repertoire: Talking Heads, an 18-foot stainless steel piece that, for some, might seem like a fantastical backbone glimmering in the northern Nevada desert light.

“Burning Man provides me with direct feedback. Within that kind of radical self-expression, people aren’t afraid to please you and they tell you what they really think,” he reflects from the serene calm of his backyard in East Palo Alto.

“They saw different things in Talking Heads. Some people saw corals or bones or faces. But for me, this work was just to spark somebody’s imagination. It’s abstract work. At Burning Man, people stopped and took pictures or climbed on it. I could see how they really interacted with it.”

Burly and benign, Oleg values such moments of untainted interaction between the world and his art. As a sculptor, he’s often removed from his work once completed. He no longer lives near the walls he adorned at the Cathedral Church of St. John the Divine in upper Manhattan during the 1990s and his restorations of marble statues on Stanford’s campus are in pristine shape, no longer needing his chisel and care.

Not only did the placement of Talking Heads on the desert floor offer Oleg personalized feedback, but the piece also achieved his ultimate goal of sparking the imagination. Countless people interacted with the piece and sought him out afterwards to share their interpretations. The abstract sculpture is based on a balance between negative and positive spaces in conjunction with how the viewer interprets it through its high-polished veneer. 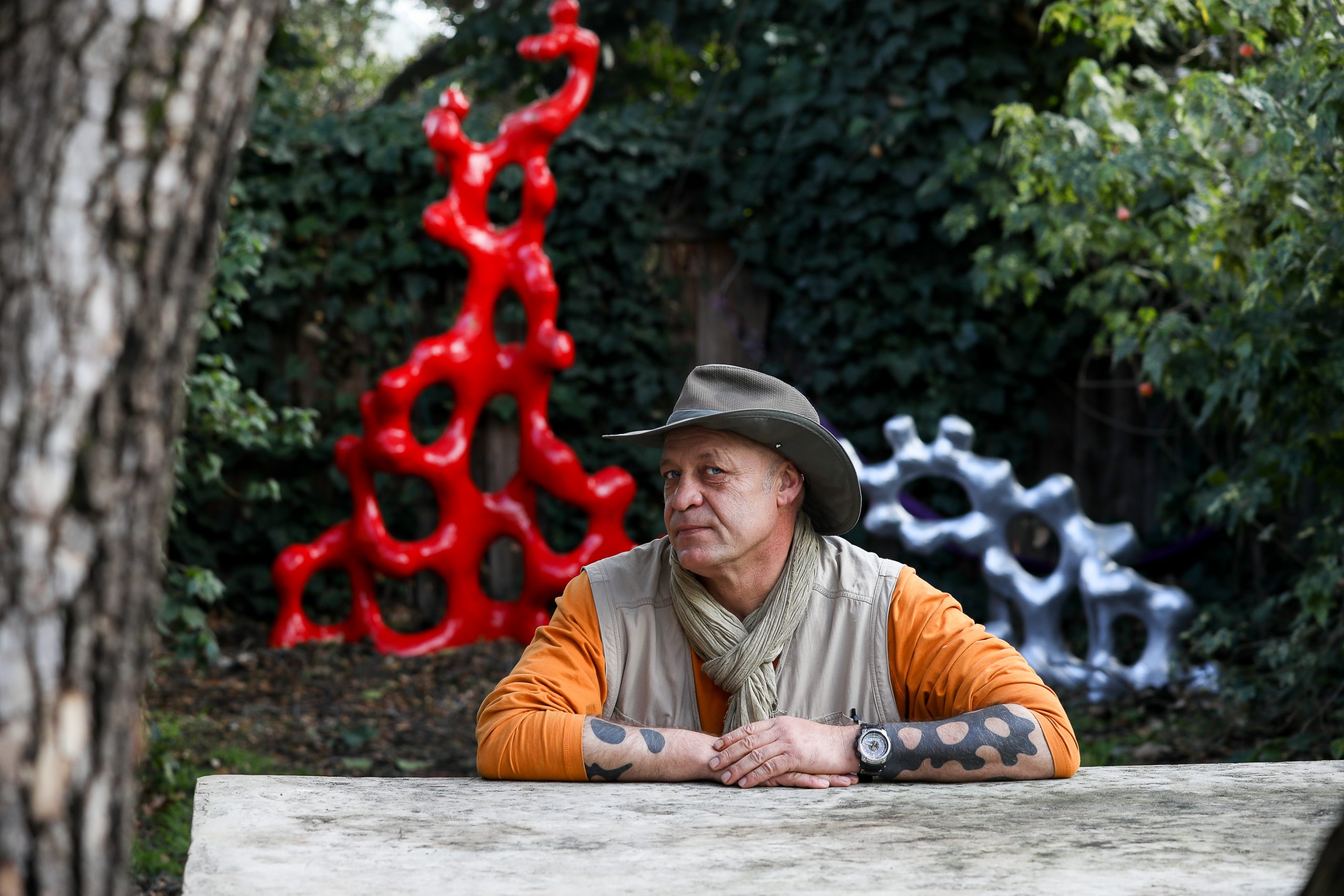 Oleg is driven by the exploration of such harmonious contradictions within the natural world—the space between chaos and order, light and darkness, good and bad. Born in Russia, Oleg has lived in the U.S. since 1989 and he even toggles between languages when speaking to his wife Kimberly (or when playing catch with his shaggy white dog).

Oleg managed to physically demonstrate the concept when developing Talking Heads last year. He began by carving shapes with his hands before running it through a 3D scanner. From there, he built the sculpture using the smaller pieces made of S-316 high chromium steel. The combination of using advanced technological tools like a 3D printer alongside sculpting, one of the oldest forms of art-making, deepens his investigations into harmonious dualities.

“If you don’t know what’s bad, how do you know what’s good? That’s what I call a harmonious contradiction,” he muses. “Art is a unique language; you can use it to explore deeper than you could with science. Art is a connection between the conscious and subconscious. People look at art but might not understand it. But if it produces a feeling or makes you think, then it still did something.”

The narrow brick path leading to Oleg’s home and studio in East Palo Alto is lined with his work. There’s a life-sized baby statue he carved in stone modeled after a small toy (he even replicated the “Made in China” imprint for laughs) and a stone placard reads: “Oleg Lobykin 1966 — 20?? Life is a dash between dates.”

He lives here with his wife and their 16-year-old daughter. He designed and made their backyard stone look-alike table and benches by hand and on the wall in his garage is a conceptual rendering of a local public art installation: a massive SF sign alongside Highway 101 that he envisions for the hillside near Hunter’s Point in South San Francisco. Inspired by the Hollywood sign and the Giants logo, the sign would honor a sustainable future with solar panels and would serve as a proper greeting for visitors as they drive into the City. It’s a lofty idea, perhaps stunted by its own ambition, but Oleg’s capacity for imagination extends beyond the physical world.

“I keep in touch with reality but I fly in the clouds,” he says. “I dream big.” 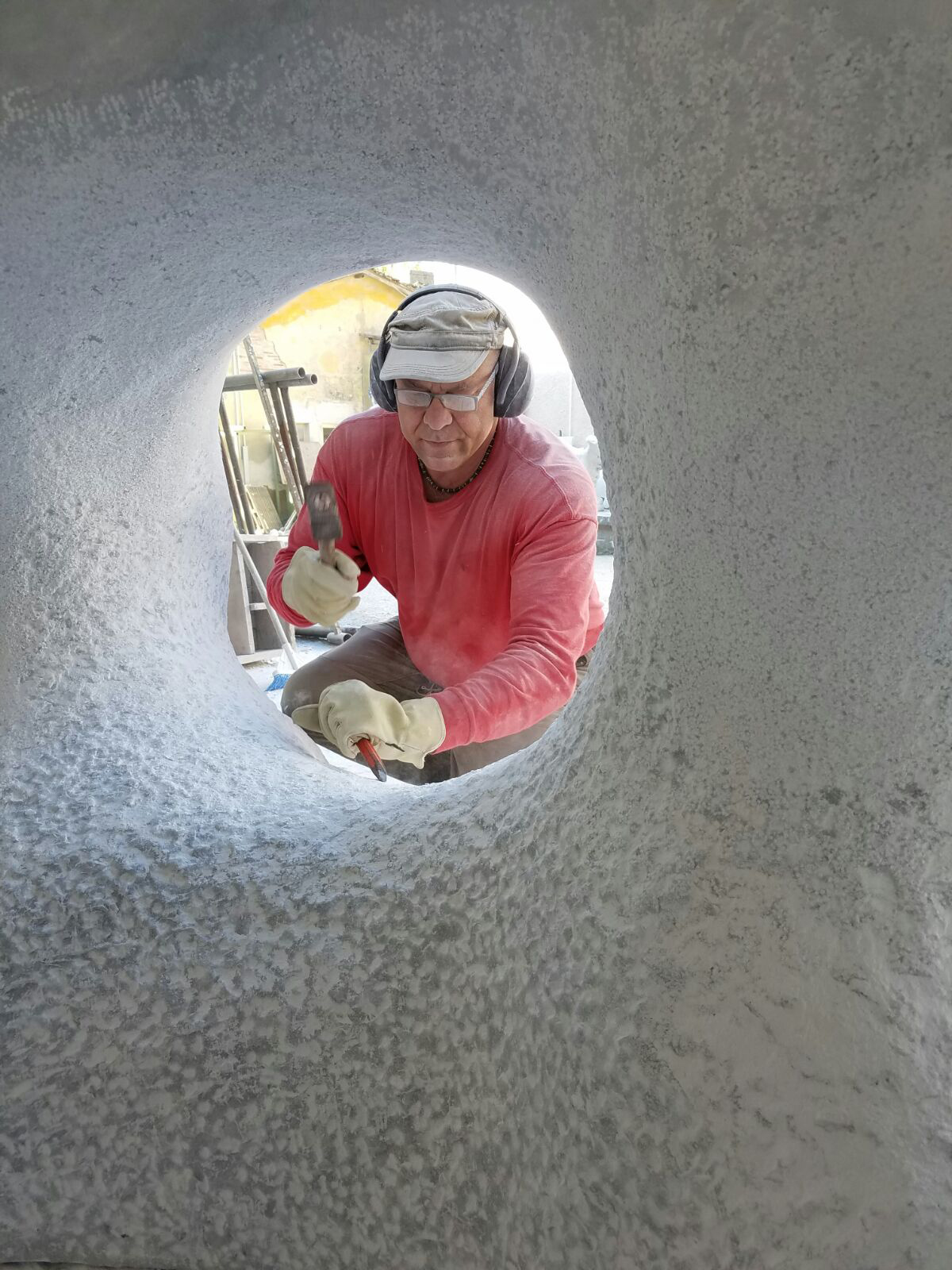 For the last two decades, Oleg has lived on the Peninsula, but he was born on the other side of the earth’s mantle in St. Petersburg, Russia. When Peter the Great founded St. Petersburg in 1703, he called the Western-leaning port city the “window into Europe”—a concept that would eventually find its way into Oleg’s idea box when he was contemplating ways to celebrate his hometown.

He envisions a stainless-steel monument in the form of a window frame he’d install off the city’s coast in the Gulf of Finland. The rectangle frame could tower as high as 600 feet and its reflective steel would mirror the sky and the Baltic Sea. He’s already constructed a few renderings of his vision and even put a model on display at Moscow’s Manezh Central Exhibition Hall and later in a scupture museum in St. Petersburg. However, when he met with city officials, they supported the idea but lacked the capital to produce it at this time.

“I just bring the idea and not necessarily the fundraising,” he says. “I was talking to my friend who lives in St. Petersburg and when he heard about my idea, he said that I needed to patent it. How can you patent an art idea? I record it and make it public so someone can be inspired by it.”

On the desert playa last August, one of the Burners who passed by Talking Heads and paused for a moment of reflection (and a selfie) was Menlo Park councilwoman Catherine Carlton. The work also caught the attention of a new arts commission, Menlo Park Public Art, which presented it to the city last October. The Menlo Park City Council approved the sculpture, making Talking Heads the inaugural piece of public sculpture art for the city.

With Talking Heads expected to debut somewhere in Menlo Park later this year, Oleg deserves a moment of reflection himself, but he just can’t seem to press pause on his imagination. After all, “My studio is my mind,” he says, before returning to his dreams.