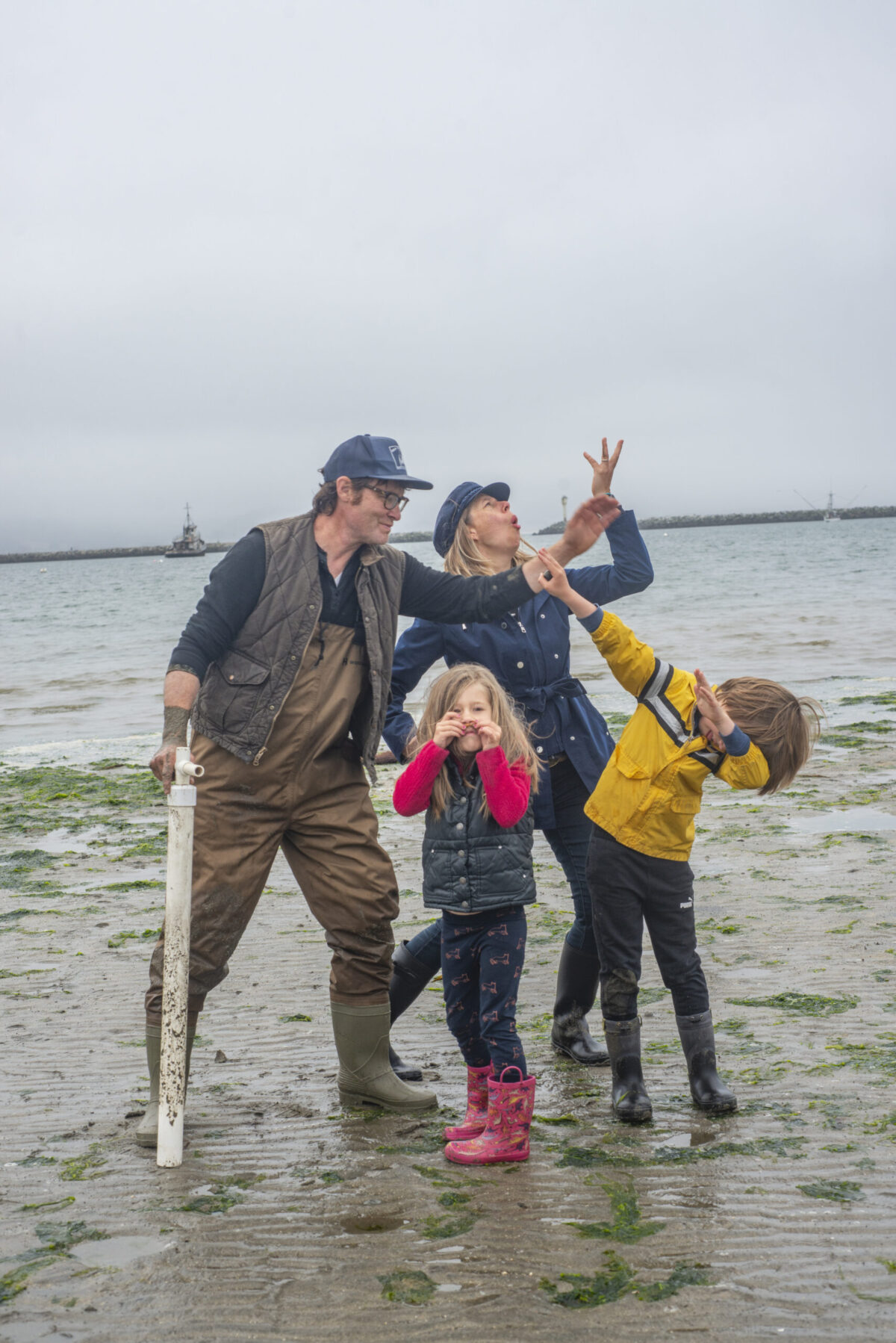 The intertidal zone marks the series of moments when the ocean reveals her secrets in a deep minus tide. At Princeton Harbor by the Half Moon Bay Yacht Club, in the fogged-in grey of early morning light, Kirk Lombard already has his gear ready and his family in tow. He reminds his seven-year-old son, Django, how to hunt for clams. “Look for the deep holes where you can see a slit,” he advises. “That’s a mouth.”

Kirk points to a spot that would slip by the untrained eye. Django stomps hard and a shocking spurt of water flies up. “That’s where we dig,” he says confidently. Inserting his clam tube around the small hole, Django begins to suction the horse neck clam to the surface. He then presses his body to the wet sand and reaches in, pulling out the most unlikely of creatures. Its long neck protrudes from a wide, hard shell. “You can treat it like sushi,” Kirk’s wife and business partner, Camilla, explains, “or it makes a really great chowder.”

A little ways down the rocky, seaweed-strewn beach, their five-year-old daughter, Penelope, is doing her own foraging, taught by her father over many family excursions like this one. She proudly holds out a ghost shrimp, its see-through body shimmering in her hand. For this busy family, with a thriving Community Supported Fishery (CSF) business built on delivering sustainable seafood around the Bay Area, these are the precious moments when they connect to the wonders of the sea that have held them in thrall since childhood.

Originally from New York City, Kirk spent his boyhood summers with his grandfather in Santa Cruz, who fished for steelhead trout in the San Lorenzo River and nurtured Kirk’s love for foraging and fishing. Camilla grew up on the beaches of Santa Barbara as a surfer and junior lifeguard. Fate brought them together at the Odeon bar in San Francisco, where Camilla was bartending while she went to law school and Kirk’s band was playing. “On our first date Kirk took me to a beach in Pescadero,” Camilla recalls. “I had my French easel and I was painting while he was foraging for monkey-faced eel. It’s a nice metaphor for our ability to do our own things together.” Now, they’ve grown their compatibility and shared love of art, music and sustainable seafood into the business that supports their varied passions and makes use of their diverse skill sets.

Kirk began his career as a supervisor for the Pacific States Marine Fisheries Commission, where he learned the elements of responsible fishing and built relationships with fishermen throughout the Bay Area. When he got laid off, he had more time to devote to his love of poke pole fishing and gradually learned the art of foraging some of the ocean’s less popular residents, like night smelt and horse neck clams. Descended from a long line of performers—his grandfather was an opera singer, his father performed on Broadway and his mother took voice lessons from Ethel Merman when she was a girl—Kirk has a powerful singing voice and plays the tuba, the harmonica and a homemade one-string. He started to wonder if he could put his unique skill sets of performing and foraging to use. “I was an actor in New York and I’d performed in many bands, but I was also passionate about the creatures in the intertidal zone,” Kirk reflects, as he peers out to sea. “What I really liked was communicating with the public and I began to experiment with giving walking tours. As soon as I started taking people out, I saw that this was going to work.” Kirk officially launched a series of foraging walking tours in San Francisco and Half Moon Bay, which led to his book, The Sea Forager’s Guide to the Northern California Coast.

The financial demands of a growing family dovetailed with a real need he observed during his tours. Dusting off his hands, Kirk explains, “At the end of all my tours, people would always say, ‘This is really interesting, but I don’t have time to do this myself. I want sustainable seafood, so what do I do?’” Kirk began to formulate the answer to that question. When his friend Kenny Belov, who runs a wholesale fishery, TwoXSea, at San Francisco’s Fisherman’s Wharf, offered him space to work and seafood he could source to his exacting specifications, Kirk started a Sea Forager CSF based on the model of the Community Supported Agriculture (CSA) used by farmers. And Kirk ensured that the seafood didn’t just come with vague reassurances about sourcing and sustainability. Every fish provided by Sea Forager includes details about the boat, the captain and where the fish was caught.

Kirk’s workload ramped up so quickly that he couldn’t manage it alone. The time to create “a mom and pop fishmonger business,” as Camilla refers to Sea Forager, had arrived. “Seven years ago in February I quit my job, in March we had a baby and in August we started Sea Forager,” she recounts with a laugh. Kirk handles the fish and deliveries. From their Moss Beach home, Camilla takes care of customer service, marketing and event management, as well as singing and playing accordion in the Sea Forager official band, The Fishwives. It’s been a whirlwind time—that’s included the birth of their two children.

While many businesses have struggled during quarantine, Sea Forager has boomed. The increased demand for local products prompted the hiring of more workers to help Kirk process and deliver the seafood for their CSF. “People want to connect with their local food sources, whether it’s their local farm or their local fishermen,” Camilla points out. “I think, frankly, with COVID-19 people don’t want to feel like they’re going too far out of their geographical zone to source their food and it’s great to feel like they’re supporting their local community.” Even with this added pressure for locally sourced fish, Kirk and Camilla have remained committed to their specific brand of sustainability, which includes some creatures that their customers may not be used to preparing and eating. 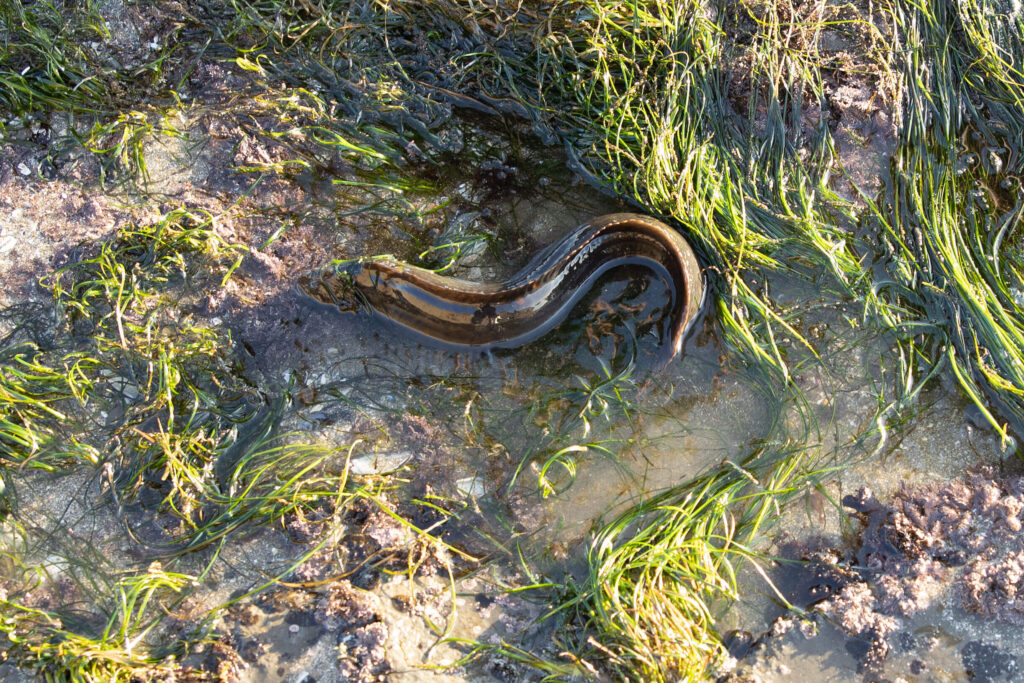 Kirk and Camilla are intent on educating customers about why they need to add variety to their seafood diets and about how to prepare the fish they provide. Sea Forager has lively social media feeds where customers share recipes, and they host events where customers can interact with each other and the fishermen who provide their meals. They realize that everyone likes salmon, and they provide it, but they also sprinkle in some sea critters that may need more explanation. Camilla leans forward to clarify their mission, “In the context of the CSF, we turn people on to a lot of seafood they wouldn’t necessarily know what to do with—like night smelt, anchovies and sardines. This is all part of the push to get people to eat lower on the food chain, so they can have less mercury themselves but also have the benefits of the nutrients that seafood has to offer instead of always going after the fillets.” Kirk nods in agreement, adding, ”The small silvery schools of fish are the ones we should be eating if our primary concern is the continuing health of the ocean.”

Though Sea Forager events are temporarily suspended due to COVID-19, they look forward to restarting that part of their business when safety permits. In the meantime, their Facebook and Instagram feeds continue to provide customers with clever recipes and a deep sense of community. “We have a lot of love and a lot of people who feel connected to us,” Camilla says, pushing a strand of blond hair from her face. “Our greatest marketing tool is our customer base.”

For now, with the intensity of his schedule, Kirk doesn’t have a lot of time for the foraging that started it all. When he seeks out a low tide these days, it’s usually with one of his children, and more often, it’s about catch and release. He treasures the quiet moments when he can pass on his love of the intertidal zone and its creatures to his young children. Even in the hectic pace of days, both Kirk and Camilla find a deep-seated gratitude in what they’ve been able to create together. “We love Sea Forager,” says Camilla, smiling widely into the salty ocean wind. “It’s afforded us a life of being here—it’s the most you can ask for.”