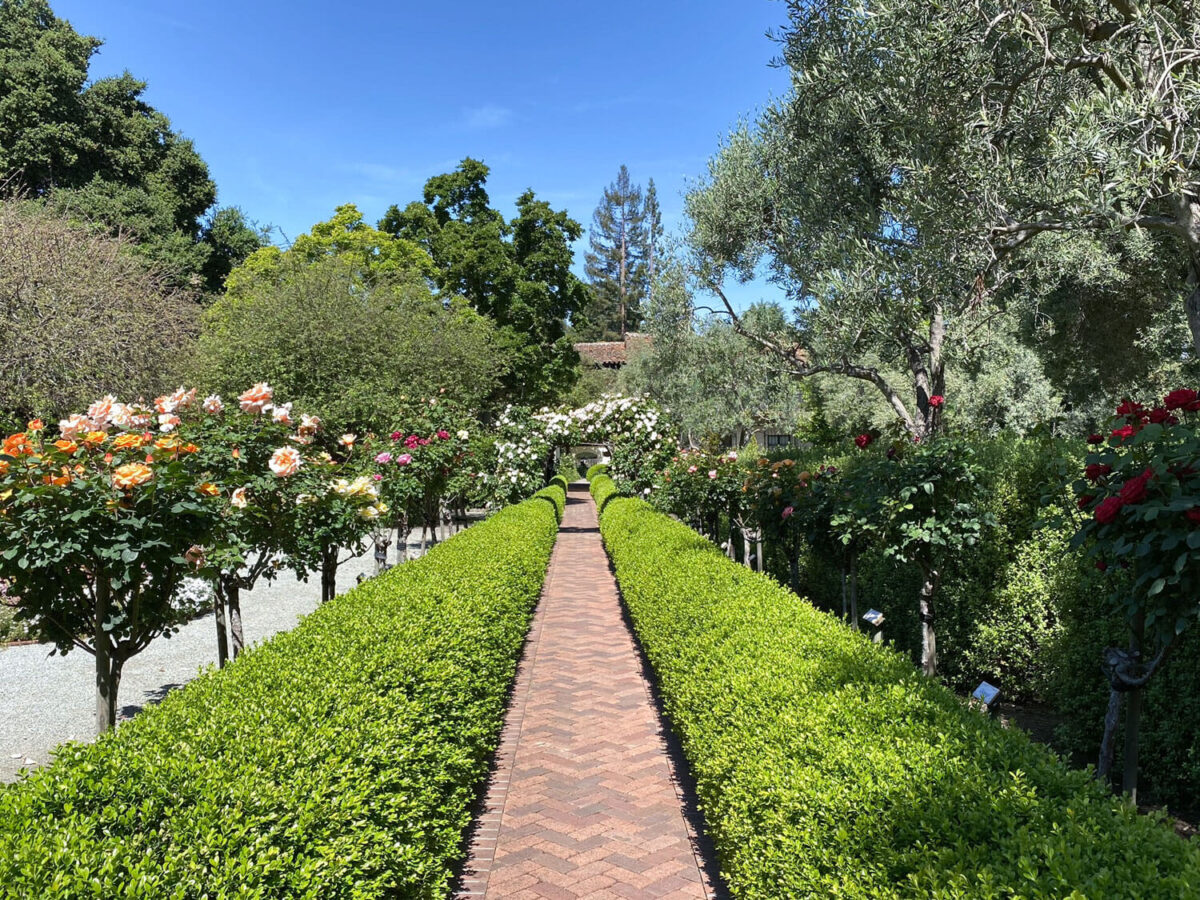 Tucked at the back of a Menlo Park neighborhood, at the edge of San Francisquito Creek, begins a tree-shaded barrier wall extending a long block. Multiple gated entry points—all emblazoned with the large italic monogram A A—catch the eye, inviting further interest. What’s hiding back there? Is it a private estate? Peering over the top, curiosity mounts given that while some structures look distinctively Spanish Colonial, there is a mish-mash of other styles including an old wooden barn.

This is one of the most distinctive and historic collections of buildings on the Peninsula—the Allied Arts Guild, home to artisans, shops and stunning gardens for over 90 years now. How did it come to be, and what secrets does it hold?

From Spanish land grant to guild for artists

What is now the Allied Arts Guild, located at 75 Arbor Road, initially belonged to the 32,000-plus-acre tract called the Rancho de Las Pulgas, which was awarded to Don Jose Dario Arguello by the Spanish Governor of California in 1795.

The Peninsula landmark traces its current history back to 1929, when wealthy art patrons Delight and Garfield Merner purchased 3.5 acres of what had been Murray Farm. They worked with renowned architect Gardner Dailey and artist Pedro de Lemos to create their vision of an arts guild that would house workplaces for artists, support folk art and encourage the crafting of everyday items.

The original Murray barn and sheds were preserved and proved useful in the construction of the rest of the buildings, many of Spanish Colonial design, accented by wrought iron work and red roof tiles. The main building used the framework of the old Murray farmhouse with the archway still in place today.

Inspired by famous sites the couple had visited in Spain, the gardens were designed and named in the Spanish manner: The Court of Abundance, The Garden of Delight and Cervantes Court, which has an inner courtyard featuring a mural of Cervantes dedicating Don Quixote to his patron, Count de Lemos.

The tiles and objects of art used to decorate the walls were sourced from Spain, Tunis and Morocco. Famed female artist Maxine Albro (also noted for her Coit Tower murals) and the de Lemos family created the decorative mosaics and frescoes.

In 1932, the Merners invited women from the Palo Alto Auxiliary to serve lunch at the Guild to benefit Stanford’s Hospital for Convalescent Children (now Lucile Packard Children’s Hospital at Stanford), and in 1935, the couple retired from active Guild engagement, ceding the running of the complex to the Auxiliary.

Visit by a famous American photographer

Shortly after the Guild opened, 29-year-old Ansel Adams became its photographer of record and captured the first interior and exterior photographs. According to Alan McGee, a photographer who exhibits at the Portola Art Gallery located at the Guild, Adams’ photographic career was well underway at that point—having found a sponsor, Albert Bender, established friendships with Paul Strand and Georgia O’Keefe and created a widely acclaimed masterpiece, Monolith – The Face of Half Dome, Yosemite 1927. Although Adams had a 60-print show at the Smithsonian scheduled for that year, he struggled to support himself on print sales of his photographs alone, so he also accepted commercial work.

Of note: In 2010, McGee and fellow photographer Graham Creasey embarked on a “re-photography project” using the same vantage points and lighting conditions as those used by Adams. The result is Allied Arts Guild – Past and Present, a booklet which is available for purchase at the Portola Art Gallery.

The Guild from mid-20th century to now

Following its inception in 1932, “having lunch at the Guild” became an established local tradition for Menlo Park and nearby residents. Served by members of the Palo Alto Auxiliary, the dining experience included the opportunity to buy favorite recipes printed on little blue note cards. In 2005, volunteer members created and published Tastes, Tales and Traditions, an Allied Arts Guild cookbook, which is still available in print.

After lunch, visitors enjoyed strolling through the gardens and perusing the Guild’s many shops, including The Traditional Shop, overseen by the Woodside-Atherton Auxiliary, now called the Allied Arts Guild Auxiliary.

“We sold a lot of Waterford crystal, old Imari pieces, lamps, silver and jewelry,” recalls Menlo Park resident Louise DeDera, who has been a member of the Auxiliary since 1973. “At Christmas, people looked forward to hearing, ‘The tree is up!’ This meant that an 11-foot tree from Oregon was up and decorated in the shop. Boxes full of ornaments circled the tree, and customers were given baskets to fill with their purchases.”

The Allied Arts Guild complex is now owned and operated by the Allied Arts Guild Auxiliary with the purpose of raising funds for children receiving medical care at Lucile Packard Children’s Hospital through donations made to Lucile Packard Foundation for Children’s Health. The Guild’s lunch tradition endures at Cafe Wisteria, a venue managed by event director Tiana Wong, who took over in 2018. Serving contemporary American food, the restaurant’s customary lunch schedule is Monday through Saturday from 11AM to 3PM.

In her role as event director, Tiana oversees weddings, memorials and other gatherings at the Guild. “Weddings come from everywhere, even the UK and China,” she says, confirming that some years ago an elephant played a featured role at one ceremony.

No visit to the Allied Arts is complete without visiting the shops on the property. The selection includes pottery, leather work, an art gallery, layette boutique, couture women’s wear, floral shop, Italian jewelry and textiles for upholstery and window treatments.

The Traditional Shop is now called the Artisan Shop—staffed entirely by volunteers with all profits donated to Lucile Packard. The Artisan Shop is housed in the historic Milono Building, designed by Germano Milono and cited in 1953 by the American Institute of Architects as one of the best designs in the Bay Area. While its exterior echoes the exterior of the barn, its style is decidedly contemporary.

The Allied Arts mainstay is Thomas Kieninger, who is the second Kieninger to make and repair furniture at The Barn Woodshop, taking over the business from his father, Albert. The woodworking barn has been in business for 90 years in the same location—the original barn that was built in 1885—an enduring reminder of the Guild’s deep, historic roots.

While closed during the spring due to the shelter-in-place mandate, the Allied Arts Guild’s normal operating hours are Monday through Saturday from 10AM to 5PM.