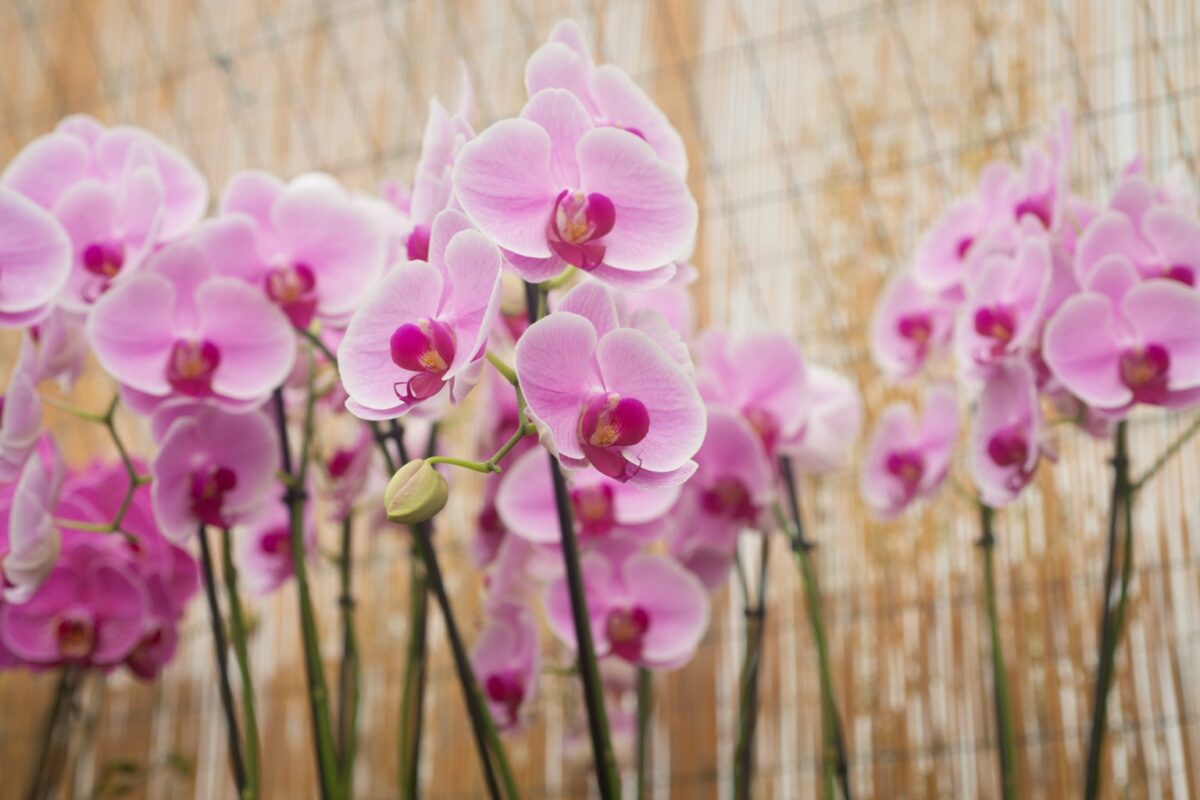 It’s Tuesday morning, and Sara Jorgensen is full of anticipation. After pulling into the Webb Ranch lot in Menlo Park and continuing up a steep driveway, she parks outside the greenhouses of Brookside Orchids. She steps inside and minutes later   she’s walking back out again, holding a brilliant magenta and burnt-orange flowering potted orchid plant in her arms. “This one is from the Raymond Burr collection, so we call him Raymond,” she says. “When I pick him up, it’s like seeing an old friend.”

Being introduced to a plant is a little unexpected, but it’s understandable when you consider it’s a reunion that’s happening. A few times a month, Sara makes the short trip over from Woodside to drop off orchids from her collection that have gone out of bloom and pick up orchids coming back into flower. “I always have an orchid or two in the house because I love the color and fragrance,” she says, estimating that she has maybe 30 orchids in all. “They’re just very tasteful and really beautiful to have on hand.”

Sara discovered orchid boarding 25 years ago, starting with a regular drive up to the Rod McLellan nursery in South San Francisco. In fact, she originally purchased “Raymond” back in 1993, as part of a special sale following Raymond Burr’s death. (Burr, of Perry Mason and Ironside fame, was also a skilled orchid grower.) When McLellan shuttered its doors in 2000, Brookside Orchids jumped into the boarding business to fill the void, offering complete care including watering, fertilizing, repotting and dividing as needed. Brookside now has seven greenhouses in Menlo Park, home to retail, wholesale, boarding and production, and another three greenhouses dedicated just to boarding in Pacifica.

Today, Brookside has about 400 boarding customers. The cost is $5.50 per square foot with a minimum of 10 square feet—so about as many plants as can fit on a standard card table for $55 per month. Brookside Orchids manager, Mark Pendleton, says there are two kinds of orchid boarders: avid collectors (no room for a greenhouse, some using up to 300 square feet) and, taking a page from Harry Potter, “orchid muggles,” enthusiasts who appreciate the beauty but don’t have the magic touch or interest to care for them. Looking beyond Brookside’s spectacular wholesale and retail displays with every splash of color imaginable, it’s easy to delineate where the boarding happens. Pots of every size, with owner name tags attached, sit on tables, arranged in row after row of green. Lots of plain, kind of monotonous, green. When it’s out of bloom, the glorious orchid is essentially reduced to some leaves, strange-looking roots and a pot of bark or Sphagnum moss. And that’s exactly why boarding happens. Most orchids typically stay in bloom six to eight weeks a year, with only a few varieties flowering twice a year. The rest of the time they look, well, a bit naked and awkward. “The biggest problem is that people lose interest because they become a sort of ‘ehh’ kind of thing,” Mark says. It takes considerable patience and commitment to bring orchids back into flower—a six-ingredient formula you have to get just right: air, light, water, growing medium (like bark or moss), fertilizer and temperature. And the conditions vary for any particular orchid. As Mark puts it, “The only rule of thumb is that there is no rule of thumb.” Do the math on all of that, and it’s no wonder an estimated 80% of orchids that get bought end up in the trash.

This next part may shock you. According to Mark, that’s actually okay. Once reserved for kings and the nobility, orchids have gone mainstream. Thanks to advancements in cloning, orchids are now the number-one potted plant in the U.S., and they’re being sold everywhere—from Costco and Trader Joe’s to Amazon and eBay. So if that white Phalaenopsis you received as a hostess gift has outlasted its welcome, go ahead and toss it. “Don’t go on a guilt trip,” Mark says. “Orchids are now consumables.”

If you do have a sincere passion for orchids or even one particular hybrid, it’s worth considering buying from an orchid specialist. Not only will you find a wider selection—be it Vanda, Oncidium, Dendrobium or Cymbidium—you’ll also get personalized help selecting a healthy plant, along with specific tips for orchid care in your home. With 100 different varieties of flowering orchids, Brookside sells from Menlo Park, its website and five Bay Area farmers markets, along with supplying orchids to local nurseries like Sloat Garden Center and SummerWinds. Prices for blooming plants range from $10 to about $75, with the median around $25-$30. How much you spend (or how much you love a particular flower) may influence the post-bloom orchid dilemma. Mark says they’re happy to guide customers on proper care, but even then, “I tell people to consign themselves to killing a few to learn how to grow the rest.”

Now back out at her car, Sara Jorgenson is making sure Raymond is secure for the ride home. She loves the simplicity of boarding and is happy to have found a solution that works for her: “I love having orchids in the house because they’re so beautiful and last so much longer than cut flowers. You do almost nothing for them and bring them back here and they do everything for them.” + Beyond the flowers, look for healthy foliage and root system (roots should feel like al dente pasta)

+ Avoid droopy leaves; foliage should be shiny with a natural luster

+ Buy with half to three-quarters of the flowers open

+ Avoid too many small buds, which are frail and more sensitive

+ Inquire about suitability in specific home or office conditions