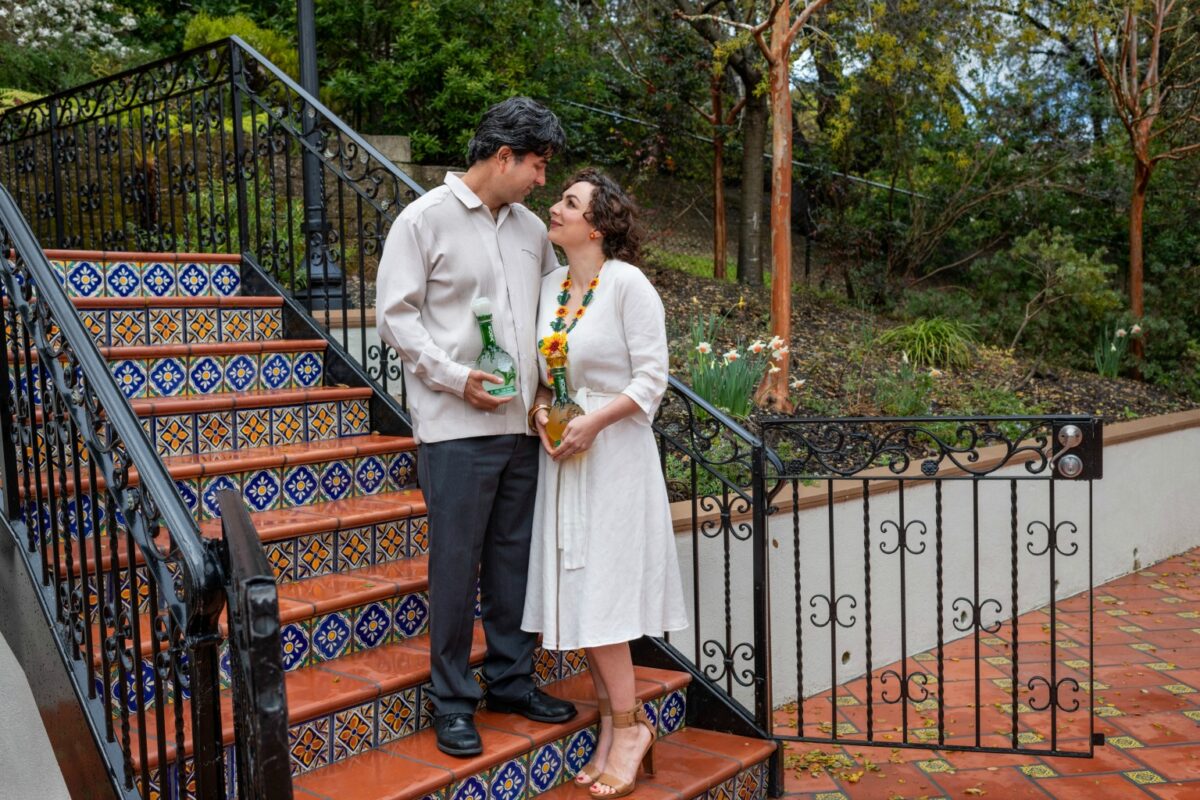 When Elizabeth Gomez thinks of tequila, the image that comes to mind isn’t licking a dash of salt, a quick shudder-inducing gulp and a suck of lime. Elizabeth recalls her family gathered around her beloved grandmother’s table, appreciating a fine tequila and talking after a meal.

For Alberto Gomez, tequila doesn’t mean a party song calling for cheap shots thrown back and a fist pump in the air. From his frame of reference, tequila is made from blue agave, aged to perfection in French oak barrels, with a full-bodied taste and a warm, smooth finish.

Struck by the jarring difference between how tequila is viewed in Mexico versus the U.S., the Hillsborough couple launched a new brand into the marketplace. They summarize their motive in a very succinct way: “Our goal is to take the spring break out of tequila one sip at a time,” Elizabeth says.

Born 10 years apart in San Francisco, Alberto and Elizabeth each have family ties to Los Altos de Jalisco, where tequila began, so pride in the spirit was instilled in them from an early age. “We really want people to understand that this is something to be savored. This is something to be enjoyed with your family,” Elizabeth explains. “I’ve always found it disrespectful the way tequila has been cheapened here.”

The idea came to them nine years ago when a cousin let the couple know about a tequila brand that was for sale. The deal didn’t come to fruition but it ignited a deeply shared passion for the project. “Let’s make this really our own,” they decided, and started building a business from scratch.

In tribute to Guadalajara, the city of roses, Alberto and Elizabeth chose the name De la Rosa Tequila. “Everybody can say La Rosa and it’s an homage to where we come from. Our older generation is gone and so it’s an homage to the strong women who raised us,” Elizabeth shares. To ensure justice to the name, the two embarked on an exhaustive development process to craft just the right blends, eventually pulling in friends for taste testing and feedback. “People make this face when they’re about to drink tequila. They cringe or pucker up. I’d say, ‘No, you don’t have to do that,’” Alberto recalls. “Our goal was to surprise people, to hear them say, ‘Wow! This is actually good!’”

The Gomezes acknowledge that business logistics can be tough. “The biggest challenge is that we are in California and manufacturing is in Mexico,” Elizabeth says, but they’re grateful that tequila’s traditions are strictly enforced. Like champagne, which can only be produced in the Champagne region in France, the production of 100% agave tequila is limited to five Mexican states, with Jalisco at the center.

Tequila is made from the heart or piña of the agave plant, which grows in Jalisco’s rich, fertile soil. After trimming away 200-plus leaves surrounding each piña, about 15 pounds of agave piñas go into producing one liter of tequila. Following the harvest, manufacturing stages include cooking, extraction, fermentation, distillation and aging—in French white oak barrels—before bottling.

Here’s how Elizabeth and Alberto describe De la Rosa’s three offerings: Blanco is tequila in its purest form (“The smooth, clean flavor makes it ideal for mixing.”), Reposado is aged between four and twelve months (“Best savored as part of a cocktail or chilled on the rocks.”) and Añejo is aged between one and three years (“It’s a testament to the craft of aged tequila with the most body and flavor.”).De la Rosa Chocolate, a tequila with a chocolate essence, will be introduced in the fall.

The pair also put a lot of thought into bottling. Alberto’s father founded Gomez Ironworks in Daly City in 1967, and Alberto credits the family business with giving him an eye for design. De la Rosa’s distinctive bottles go through multiple rounds of hand masking, painting and baking, and while beauty was the intent, the pair created a price point ($60-$70) to encourage consumption—not just display. “We don’t want it to be something you just put up on a shelf,” Elizabeth says. “This is something we want people to enjoy and to bring into their homes along with a little bit of our culture that we’re so proud of as well.”

Given De la Rosa’s newness on the market, Elizabeth and Alberto had modest expectations when they entered the 2018 Wine and Spirits Wholesalers of America Expo—where De la Rosa scored award-winning recognition and validation. “We were coming at it from the point of view of a consumer. We weren’t considering the competition or the liquor professionals,” Alberto says. “When we won gold for our Blanco and our Añejo, that was important, that really gave us a little bit of wind in our sails.” The goal now is getting the word out. De la Rosa Tequila is available through the website delarosatequila.com with broader distribution plans in the works. There’s also the matter of shifting tequila’s reputation, away from cheap, throat-burning shots to that of an elegantly mellow, high-quality spirit. “It doesn’t have to be margarita time or anything like that,” Alberto notes, when asked about the appropriate moment to imbibe.

Elizabeth agrees. “For us, tequila can be an aperitif, something that you can have before a meal or to close a meal as a digestive. It’s something you can enjoy like a wine and cheese plate—only we have tequila, cheese and fruit,” she says, before emphasizing, “This is something that comes from our heart. It’s a part of our culture that we want to share.”

Bottled after distillation to preserve its clean taste, De la Rosa Blanco is the base from which all other De la Rosa tequilas are derived. Elizabeth and Alberto say it’s also the perfect start for a festive cocktail. In honor of Cinco de Mayo, a Mexican holiday that has evolved into a celebration of Mexican culture and heritage, the Gomezes offer this refreshing and fruity concoction. Add one large ice cube or crushed ice to glass. Pour in drink, add a pineapple wedge and garnish with a slice of lime. Salud!