Photos by courtesy of Michael Mainiero 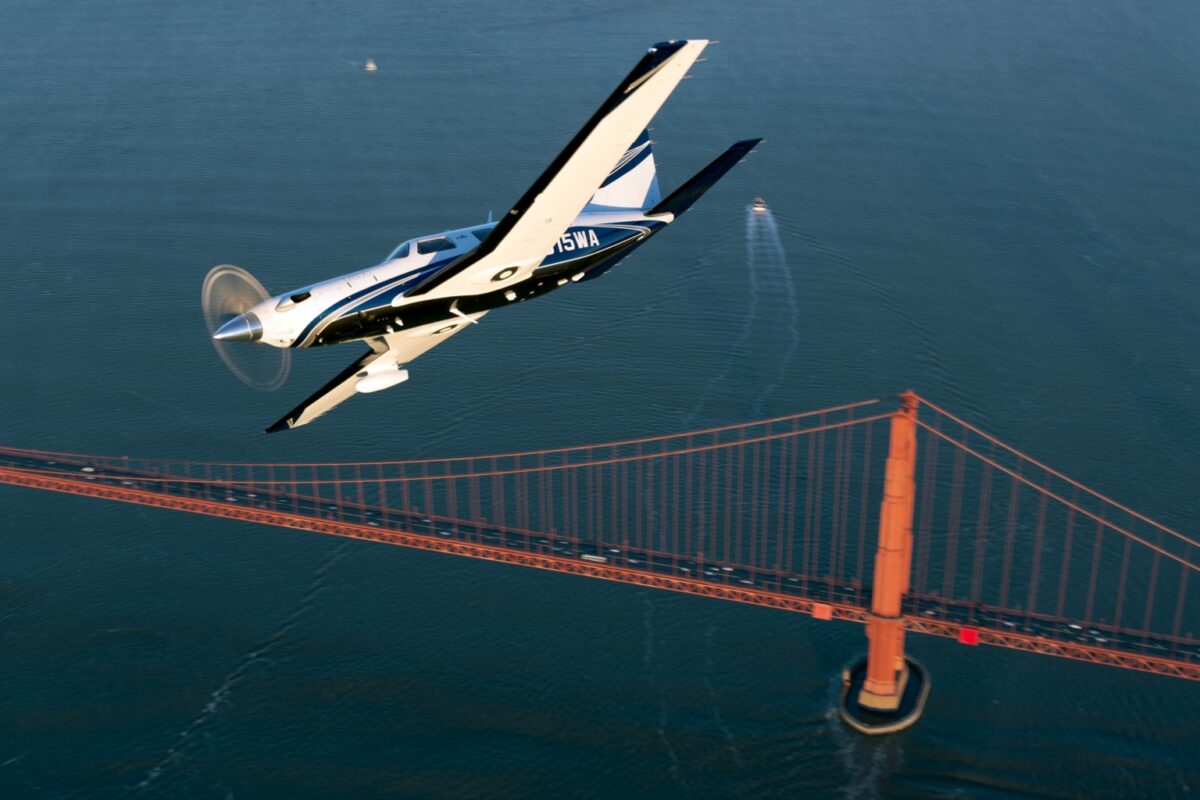 The sky was shrouded in a smoky haze with the sun hovering like an apricot in the east across the San Francisco Bay, the only visible marker seen from a Palo Alto perspective. The air traffic controller’s weather report for Wednesday, November 14, described hazardous conditions, a hindrance for Mark Baker, a pilot in training. It meant he couldn’t get up in the air that day.

Smoke caused by the Camp Fire, a few hours northeast of the Palo Alto Airport, had merged with typical Bay Area smog to create a one-statute mile of visibility, hardly clear enough to jet up a few thousand feet in the air and practice today’s lesson of short-range radio coordination.

Acknowledging that the wildfire was a far greater tragedy than the present impedance to his schooling, Mark greeted Kelly O’Dea, his instructor, and followed her to a small room inside the West Valley Flying Club’s Palo Alto location. Since they wouldn’t be able to physically fly today, they turned to the virtual cockpit of a Cirrus II, a flight console simulator that imitates the mechanical process of flying but with none of the finesse.

Mark is more at home managing his family’s real estate portfolio, but at 49, he’s embracing this new challenge. “I was never very good at video games,” Mark admits, as he grabs control of his digital aircraft. “Last time I tried to take off and couldn’t because there’s an emergency brake on this thing!”

They map out their flight plan for their virtual tour, lining up the VOR coordinates they’ll fly over. In pilot jargon, VOR, or Very High Frequency Omni-Directional Range, is a ground-based navigation system that uses short-range radio signals to determine a plane’s position. These radio beacons transmit frequencies that keep pilots on course, and there are several scattered throughout the Bay Area—the Peninsula’s central VOR is in Woodside. “Sometimes I wish I was learning how to fly in Oklahoma,” Mark jokes as he reviews his aeronautical chart of the Bay Area. “Here, we have airports in Oakland, Hayward, San Francisco, San Carlos, Palo Alto and San Jose—you can’t fly here without being in somebody’s airspace within a matter of minutes.”

The Bay Area—and the Peninsula in particular—contains a bevy of flight schools offering to turn dreams of flying into a reality for anyone who can dedicate the time and meet the price tag. If you can budget roughly $15,000 and commit to the necessary schooling, you can be up in the air on your own in less than six months (averaging three days a week of training)—although many stretch it out longer, especially if they’re juggling busy schedules.

Of the half-dozen flight schools on the Peninsula, West Valley Flying Club is the elder statesman of the group, with 46 years in business. Kelly has been teaching with the club since 2015 and currently instructs about a dozen students, ranging from beginners to pilots learning specialties such as instrument flying.

Kelly is a resident of Belmont and piloting was her second career as well as a passion that grew with each flight she watched take off from the nearby San Carlos Airport. She began her pilot’s training at age 35 and advocates that it’s never too late to learn to fly.

“Visually, it’s a banquet,” she says. “You can fly 15 minutes and be on the coast or fly 30 minutes northeast and end up in the Napa Valley. This time of year is stunning; then the spring brings the green or on occasion we see snow on the mountaintops. You’d think living in the Bay Area that you can’t see the seasons, but you do when you’re in the air.”

Kelly describes Mark as a star student who exemplifies the dedication needed for aviation education. His first lesson was in August and, after coming in three times a week, he completed his first solo flight on November 1.

The Federal Aviation Administration requires 40 hours of in-flight practice to earn your private pilot certificate. Mark has 55 hours logged and his education has included both in-flight and virtual training, an online course offered through MzeroA.com and two FAA-mandated textbooks: the “Airport Flying Handbook” and the “Pilot’s Handbook of Aeronautical Knowledge.” “Kelly told me when we started that it would be like drinking water out of a fire hose—we’re three months into it and I still feel like that,” Mark says, but he’s quick to add that the information overload is digestible. “I wasn’t nervous at all for my first solo flight and I credit Kelly with how much time we spent to make sure I was ready,” he says. “She didn’t kick me out of the nest; when the time came, I felt very ready to do it. When you’re flying by yourself, you’re only as good as the training you’ve received.”

Roughly 10 miles north of the Palo Alto Airport sits the San Carlos Airport, home to another West Valley Flight Club location as well as the San Carlos Flight Center. Dan Dyer, the Flight Center’s owner, devised an education program that’s tied to a clear structure. On top of the required textbooks, he’s developed two additional workbooks that focus on each component of the education process to allow a student to discover their strengths and weaknesses in learning how to fly. The most typical hurdle for students tends to be aerodynamics—unless you come from an engineering background, which is fairly common on the Peninsula.

On a morning with less hazardous conditions last November, San Carlos Flight Center pilot instructor Mari Baratto provided a demo on how a first lesson in the air would play out. She selects a Cessna 172, the most popular single-engine aircraft in the world, and begins by checking off dozens of pre-flight rituals like ensuring that the plane’s gasoline is pure (indicated by faint baby-blue coloring).

Inside the cozy cockpit, she flips the ignition and follows the yellow-striped road out to the tarmac, her hands throttling the w-shaped control wheel called a yoke. She lifts off and even though she’s logged over 700 hours in the air, the excitement of flight is far from fading. “It’s so beautiful,” she says. “I don’t know how you could ever get sick of it.”

Soaring above Half Moon Bay, 3,000 feet in the air, the Peninsula is sectioned into checkered land patterns that offer a comprehensive perspective of the area—agricultural squares, segmented housing developments and a strip of blond, sandy beach. Rising over the Miramontes Ridge, hiking trails mimic the contour lines on a topographic map while the unnatural pocket of the Pilarcitos Quarry exposes a tucked-away disintegration of the land.

On the ground, the Peninsula appears so established and conquered with barely an acre left undiscovered. However, when in flight, the liberated skies become a new frontier filled with intangible and infinite exploration. 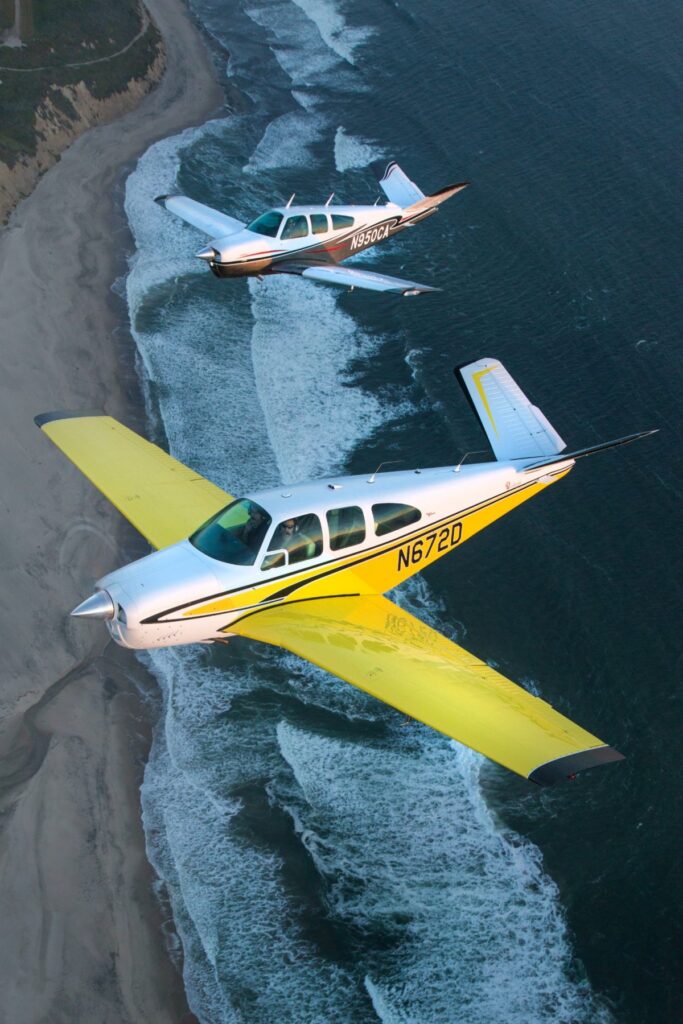 Before he was even legal to drive a car, Michael Mainiero earned his student pilot certificate license out of San Carlos Airport. By the time he turned 16, the Menlo-Atherton High School student had already been taking flying lessons for three months—and had been regularly going up in the air since he was 12. Now a corporate pilot with Advantage Aviation Charter based out of Hayward Executive Airport, the 21-year-old from Menlo Park spends as much time as he can embedded in the piloting community, either by flying (he now has 3,200 hours) or indulging in his side passion: aviation photography. Michael captures everything from airshows to air-to-air photo shoots, where he soars side-by-side in formation with his subject; sometimes he dons a full-body harness and bypasses window glare by removing the aft cargo doors on his friend’s Beechcraft A36 Bonanza. Michael is also passionate about mentoring the next generation of pilots and volunteers with the Young Eagles education program each month at the San Carlos Airport. “Interest in aviation has been lost,” he says. “There isn’t really a push in school to tell you that you too could be a pilot or mechanic or aviation photographer.” To view more of Michael’s aviation photography, visit MichaelMainieroPhoto.com