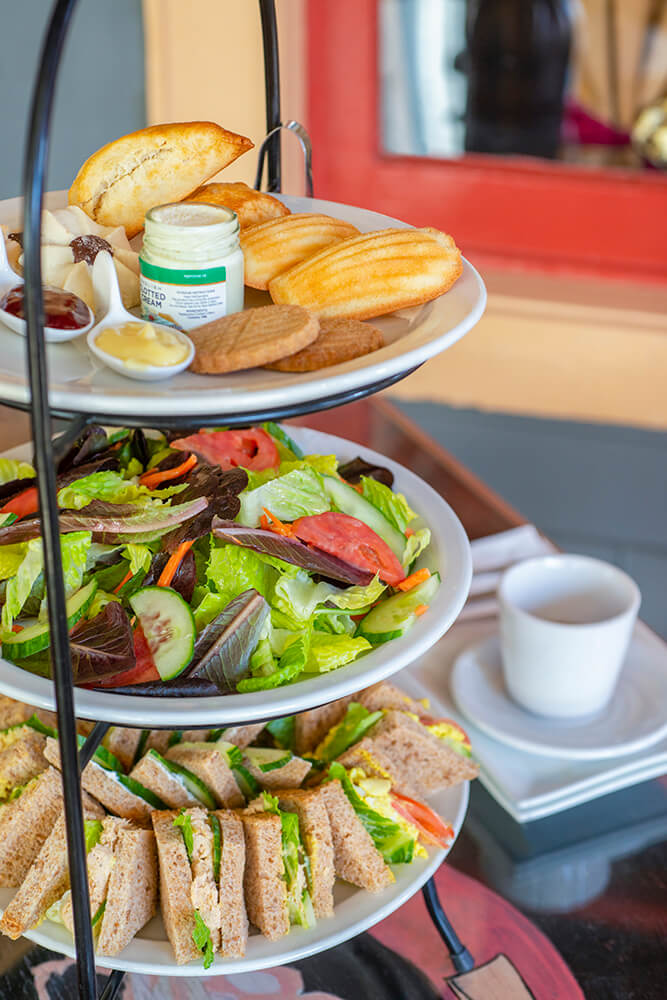 High tea at Burlingame’s Leland Tea Company isn’t a delicate, doily affair. Breaking with pinky-up pretension, it opts for heart instead. “It’s not frilly,” owner Wil Otero shrugs as he sips black tea with bergamot on the plant-fringed patio. Beside him: a plate of scones, still warm from the oven. “I just want people to feel comfortable… Tea is more about taking a deep breath.”

If anything, there’s an element of charm here. With a dapper early-20th-century theme, Leland features hand-painted, old-glamour Hollywood types along the counter, fence and tabletops, artistic renderings by San Francisco Art Institute students. 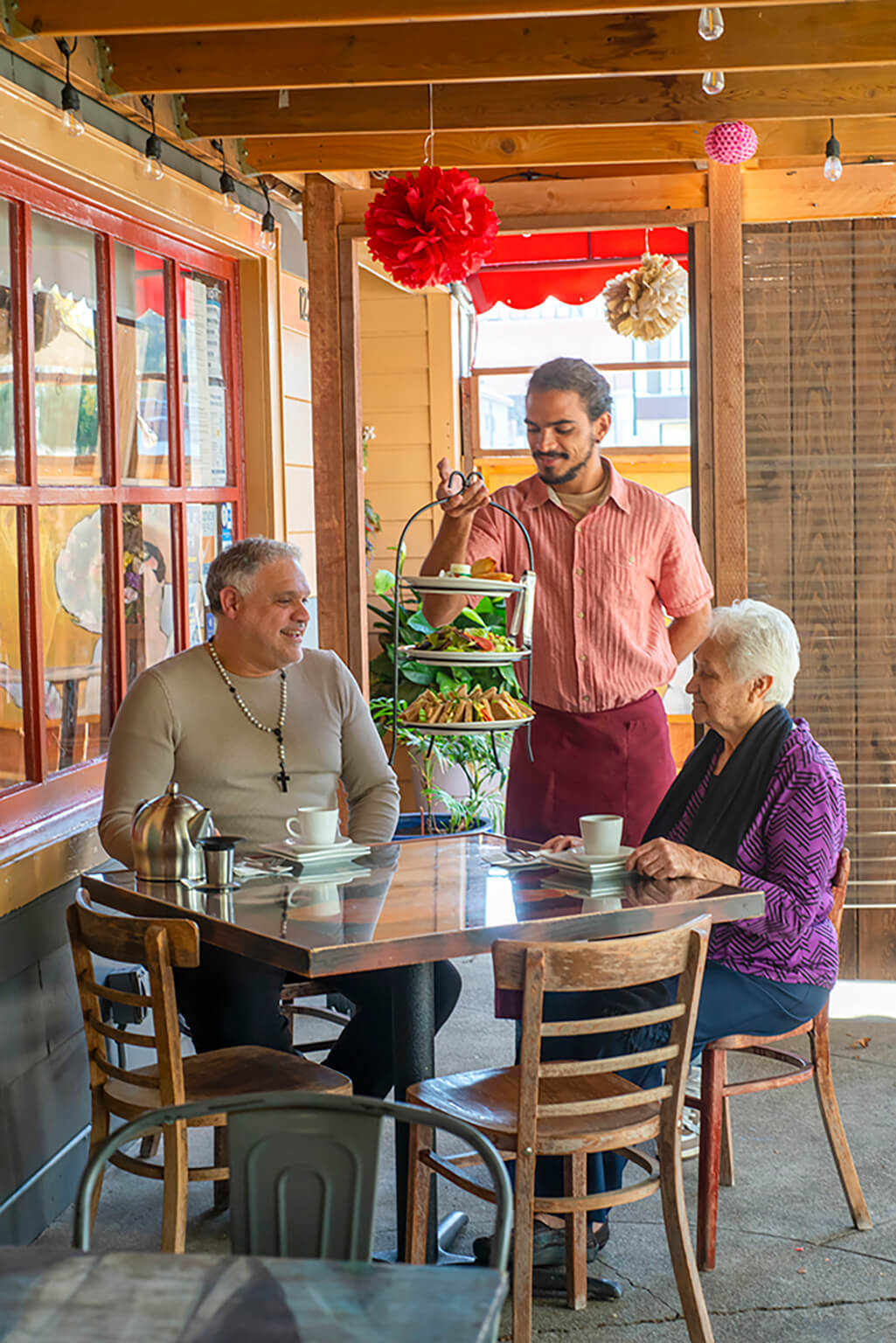 When longtime customer and friend Charlotte Ratzlaff comes over to share her motives for returning again and again to Leland, one reason tops the list: “It’s mostly Wil,” she states, adding that the atmosphere and quality ingredients are also a draw. “There are people who just radiate love—and some people do that in a way that is kind of mushy and overly sentimental…” She turns to Wil. “You’re full of snark. But it’s very loving snark.” Wil squeezes his soft stomach meaningfully, “I’m mushy, but I’m not mushy.” Charlotte chuckles, “And there’s free entertainment.”

Most days, you can find Leland’s owner over by a display of loose leaf tea tins known as the Tea Bar. You’ll know Wil by his irrepressible laugh, which bubbles out of him—wholehearted and often—along with the occasional gleeful cackle thrown in for good measure. An ardent people person, Wil has crafted many of his 85 tea blends via conversation—brainstorming flavor profiles and ingredients to match each guest’s individual palate.

“I might suggest adding some lavender or some lemongrass and ginger,” he notes. “And you might say, ‘I don’t like ginger, but I’ll try the lavender.’” He’ll check in later so he can fine-tune things in anticipation of the next visit. You’ll even find inspiration for tea ingredients from Wil’s tattoo sleeves; inked on his arms are more than a dozen flowers, herbs and spices from cardamom to clove, rosehip to elder flower.

Clearly, you can expect a serving of sass with your sencha. “When you add a white tea to a pu-erh, I just want to fight,” quips Wil, right after explaining that there’s no way to taste the subtle notes of Silver Needle underneath potent Earl Grey. Mixing green tea with pu-erh is also a big no-no. “You’re just gonna make it bite. It’s already earthy! It’s already grassy!” But Wil always educates through good humor. “I never make anyone feel like they don’t know what they’re doing,” he insists. “We do it by cracking jokes. I’m like, ‘No! I’m gonna cry. If you actually want me to do that, you’re gonna watch me cry.’” 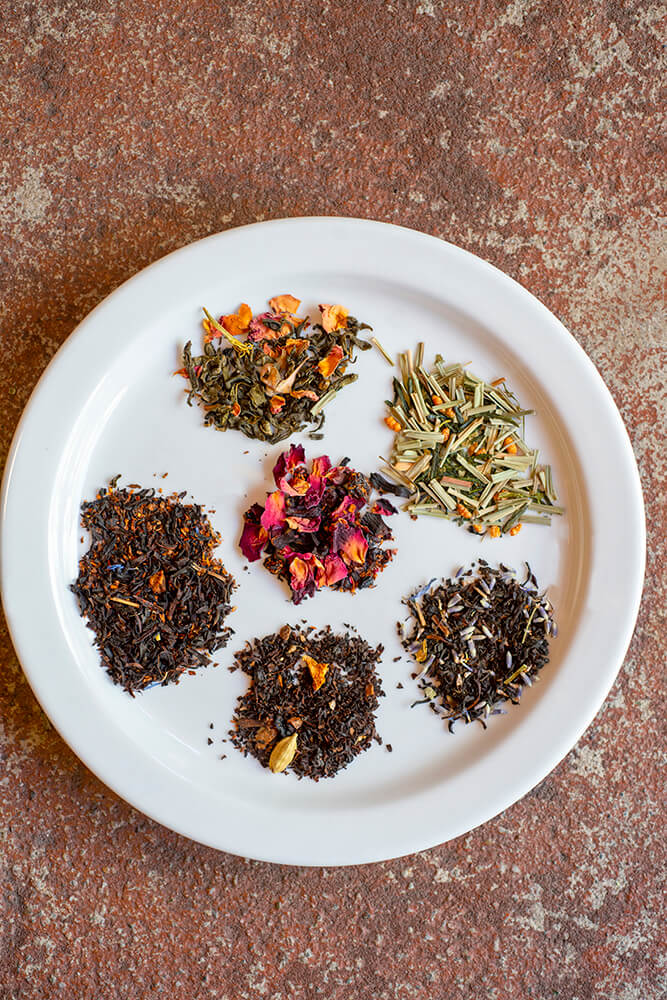 Other tea blends arise from conversations that take place in Wil’s imagination. Like Wil’s favorite: Breakfast at Tiffany’s, named after the iconic 1960s film starring Audrey Hepburn. To come up with it, Wil pictured Holly Golightly walking in the door—with her oversized black hat and her elbow-length gloves and her tortoiseshell sunglasses. “If she came through and she said, ‘Wil, make me a cup of tea,’ I’d better serve her something with a punch, that’s smooth, ‘cuz she’s classy.” On the other hand, if the debonair Rhett Butler from Gone with the Wind swept in… “He’s gonna want something a little on the fruity side and tart—just saying!”

Currently, he’s working on a new blend to capture the essence of the “High Priestess of Soul” Nina Simone. “She smoked, so something with a subtle hint of lapsang,” Wil muses. “But her music is out of this world. So I’m thinking it’s got to be maybe hazelnut, maybe cinnamon.” He says to look for it in January. “I’ve created a couple blends that I think would carry weight to what she did and how she sounded, but they’re not perfected.” And when Wil’s not making new blends for the shop, he’s inventing ones for his bottled, vitamin-infused tea brand called Vitae.

With detailed descriptions compiled on hand-stitched pages, Wil’s tea menu is its own creative masterpiece. Assisted by his friend Ahmed, this culinary novelette took four months to complete. “He would come every day and we did them alphabetically,” Wil recounts. “It was the only way we could keep track of what we were drinking.” 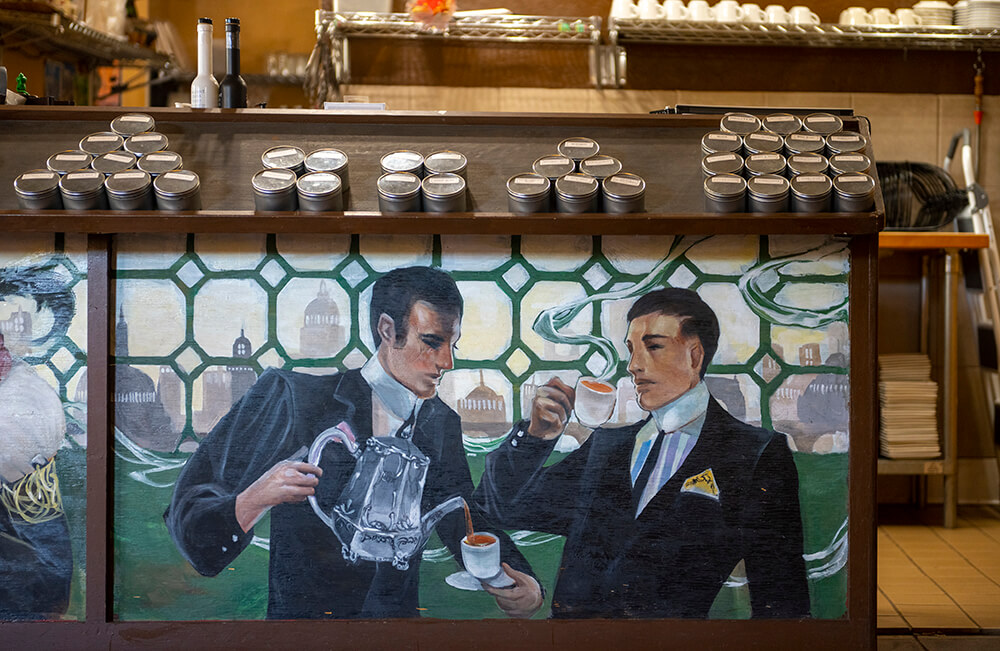 The job of running Leland also involves unglamorous tasks like bussing tables and scrubbing dishes as well as regular 14-hour workdays. But Wil waves it off. “It’s a walk in the park!” No stranger to hard work, he harvested cucumbers, watermelon, peaches, corn and tomatoes up and down the East Coast as a kid. His Puerto Rican mom, Carmen, was a female crew leader. He vividly remembers being out in the field one day and thinking, “This isn’t how I want to live.” 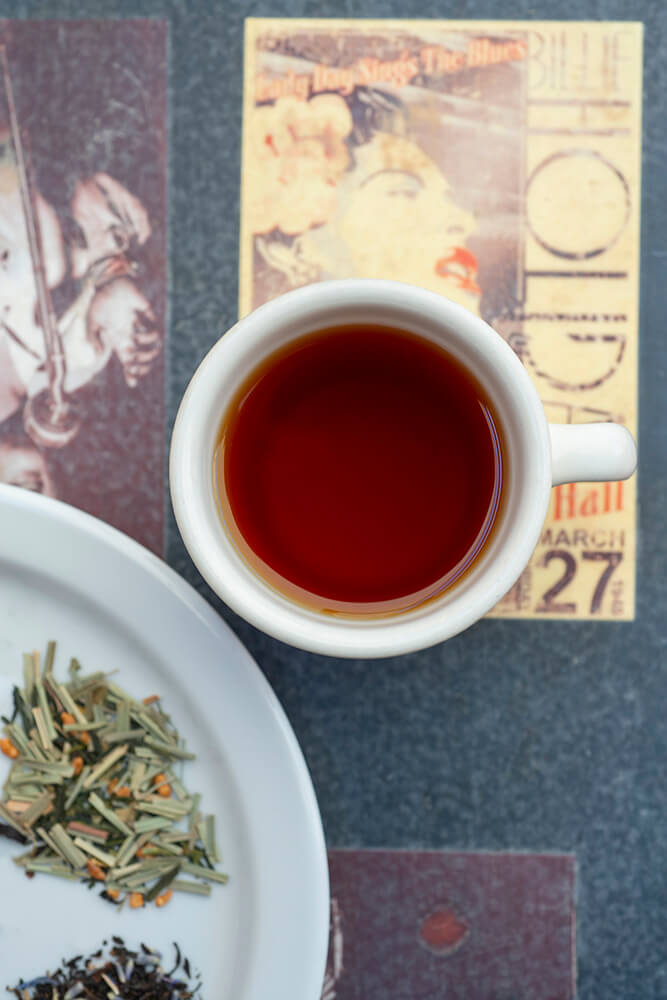 Motivated by this epiphany, Wil worked in the kitchen at Disney World’s Polynesian Resort as a high schooler. “That just ignited my passion for cooking,” he recalls. And even double shifts couldn’t put a damper on his enthusiasm. “I was an energizer bunny that just did not turn off!” Settling back in her chair, Charlotte’s lips quirk over her teacup. “Past tense is not useful there.”

These days, Wil’s mom, now a sturdy nonagenarian, can be found bustling around his kitchen. “I don’t have a choice,” Wil smirks. Whenever he pulls late nights to prep for events, she refuses to leave his side. “You’re here, I’m here,” she tells him. “She’s a tough old bird,” he notes. “She’s relentless.” And she had to be as a single mother to a brood of twelve (seven biological, another five abandoned by an ex).

Following his mother’s example, Wil cares for his regulars like family. “A lot of people have the code to the back door,” he mentions, explaining that they’re welcome to read a book or catch a quiet moment even when the shop’s closed.

He’ll also go great lengths to help them out. Wil motions at a table where he encountered one customer, a chocolate broker, distraught over losing her big client. “She had this crazy blustered look, like, ‘I don’t know if I want to cry, scream or run out in front of a truck,’” he remembers. Wil unhesitatingly offered to sell the chocolate at his shop, refusing to take a cut of the profits. “Why would I charge you?” he asked, adding with a mischievous grin, “But if I need money, just remember, I don’t borrow in the hundreds!” 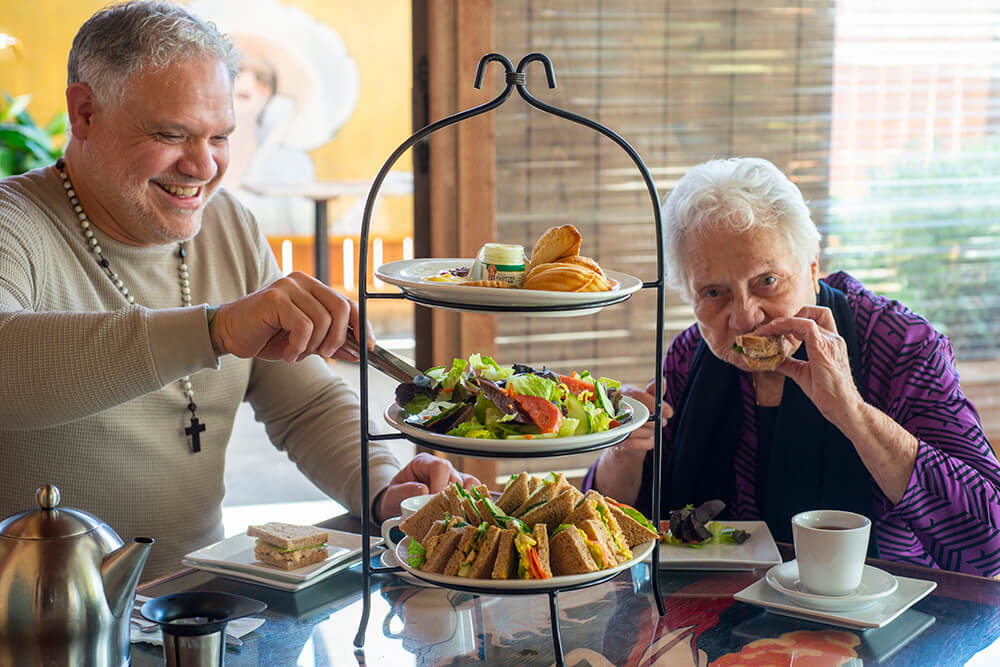 Another table triggers another memory. Wil recalls approaching a tearful young woman on the patio. “I was like, ‘What’s going on? Who do I gotta beat up?’” Unable to extract a coherent response, he set her up with tea and soon spotted her fiancé racing up the sidewalk. After everyone was a little calmer (with cups of tea in hand), Wil returned to the table. “I was like, ‘Okay, so I don’t wanna pry—but this can’t be ending.’” Apparently, the real trouble had to do with the couple’s wedding venue. They had been tricked with a highly misleading quote and had just found out it would be double the expected rate. “Why don’t you just have it here?” Wil suggested. They transformed the space with red carpets and white tents, somehow packing 120 guests into the small patio.

“I’ve honestly never been happier,” Wil says as he pours another steaming cup of tea.