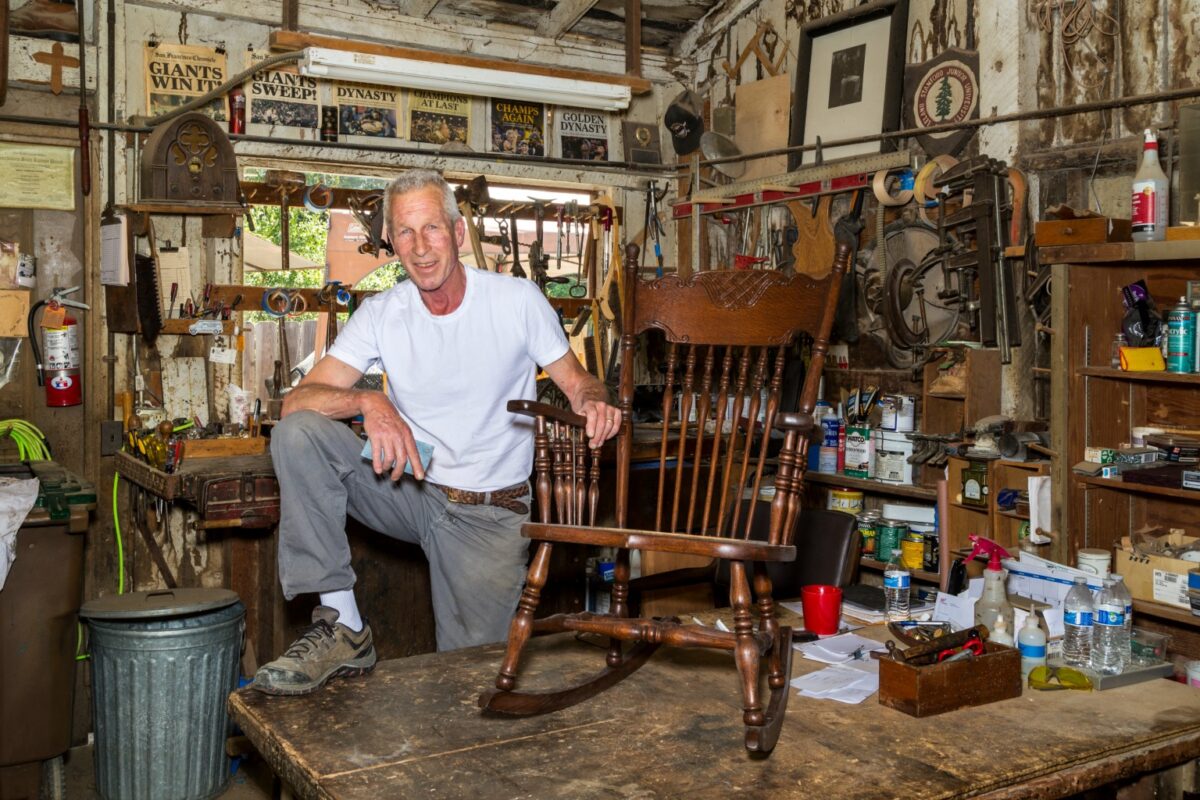 When you step into The Barn Woodshop, you are transported to a time in the past—when people worked with their hands, moved more slowly and made house calls without calling (or texting) first.

Tom Kieninger is the third generation of people doing the same quality wood work at the same shop in Allied Arts Guild in Menlo Park. You can find him there nearly any day, at all hours, either sitting behind a huge, sturdy desk listening to messages on his landline’s answering machine, standing, one leg on a chair, working on another or talking with someone who happened to wander in. He’s like a modern-day Marlboro Man, not just because of the cigarettes never far away, his baritone voice or daily uniform of white shirt blue jeans and work boots, but because there’s an authentic simplicity to him. He’s a man of few deep-voiced words, but they’re always good ones.

Upon entering The Barn, you’re taken into an organized mess—there are pieces of furniture on every side of you, in every direction, on top of other pieces of furniture. But Tom knows exactly where everything he is, the progress of its repair or restoration, miscellaneous facts about its journey there to the shop and its owner. Even though Tom He owns a home in Pescadero with his family, he’s been known to work late into the night at The Barn and has made himself an area to sleep out back.

There is a ledge overhead that runs the perimeter of the whole, large barn room, and it’s lined with relics from the past: old San Francisco Chronicle covers touting Giant’s wins, tools from hundreds of years ago (some of which came around the Horn of Africa) and cans of paint and WD40 that seem nearly that old, and, lovingly strewn on the ledge above Tom’s desk, his Dad’s black work boots. “I’m still finding things around here,” he says. Here, next door to Silicon Valley, where what is new and progressive is often considered to have the most value, the history inside The Barn is palpable. Surrounded by cities of vast affluence, Tom is clearly a person who has and takes what he needs and nothing more. Few Peninsula locations exist where history and simplicity is so revered and accessible. This is true no more than when Tom proudly shows off the shingles of one of the original Guild buildings. “These are the original shingles – their shape was made because each one was formed over the worker’s knee,” he says, mimicking the making of a single shingle over his knee. “They don’t make ’em like that anymore.”

Allied Arts, hidden on Arbor Road, looks so like a residential property from the outside and many people—even locals—drive right by it. It stands on part of what was once a vast 35,250-acre land grant dating back to the late 1700s. It wasn’t until wealthy art patrons Delight and Garfield Merner, who’d recently returned from a trip to Europe where they were inspired by various artist colonies, bought 3.5 acres of that land on the edge of Menlo Park that this beautiful workplace for artists was established. The Merners wanted to encourage the crafting of quality objects for everyday use; and to support all peasant or folk art, especially that of early California.

The Guild’s iron and wood shops were actually the first in operation because they were needed for the construction of the rest of the complex. Whereas most of Allied Arts was built in the 1930s, The Barn is original from 1885. Martin Nelson, who was a wood craftsman and sculptor, established the woodworking business that we know as The Barn at that point. Nelson believed in the importance of quality work as well as a system of apprenticeship, and he employed a young man by the name of Albert “Al” Kieninger. Albert had served with distinction in WWII and Nelson recognized in him the type of talent and work ethic worthy of his mentoring.

Al took over the business in 1974. By then, he had begun to train his son, Tom, and eventually the reins of the tradition were handed to Tom in 1987. Today, the tradition lives on as Tom mentors his son, Luke, ensuring that another generation of customers benefits from the special furniture repair and restoration knowledge and skill passed down through the years from The Barn Woodshop’s founder.

Tom has been known to make house calls. “I finally had to get an iPad,” he says. “I didn’t want to, but it is for my customers. They like to send me photos of their pieces. I guess it’s a little faster way to see them, so I’m not driving around to their houses all day.”

Susie White, a Menlo resident and longtime Barn customer tells us “We inherited some pieces from my husband’s great grandparents. We had no idea how old they were and what should be done to preserve their value. I placed a call to Tom and with very little description of the pieces, he was able to figure out the types of pieces I had and what would need to be done to them so I could display them in our home. Within 48 hours, Tom came to my home to see everything and we decided what I wanted to use. He then took them to his shop. I couldn’t believe how beautiful they looked when he brought them back. The wood had been restored to its original beauty while retaining the value as an antique. I don’t know where else I could have gone to get work of this quality and it was two miles from my home.” This is what you get when you use Tom. He is vividly aware that what he is working on is not just furniture, but peoples’ histories, their families and their dearest memories.

We spoke to Joann Holder, a longtime Peninsula resident who previously led tours of The Barn and Allied Arts Guild. “The craft at The Barn is something you rarely see outside the East Coast, and frankly when you do, they usually charge an arm and leg.” Tom’s prices are fair, and he intends to keep them that way, the same way that Allied Arts has kept the rent fair for him and The Barn stable, though they could certainly charge much more for the legendary building. “He’s doing 19th century work in a 21st century marketplace,” Holder adds.

When asked if he liked being alone with his thoughts and his work, Tom smiles and looks up at a sign that his father carved into a piece of driftwood the two of them had found floating in the ocean: