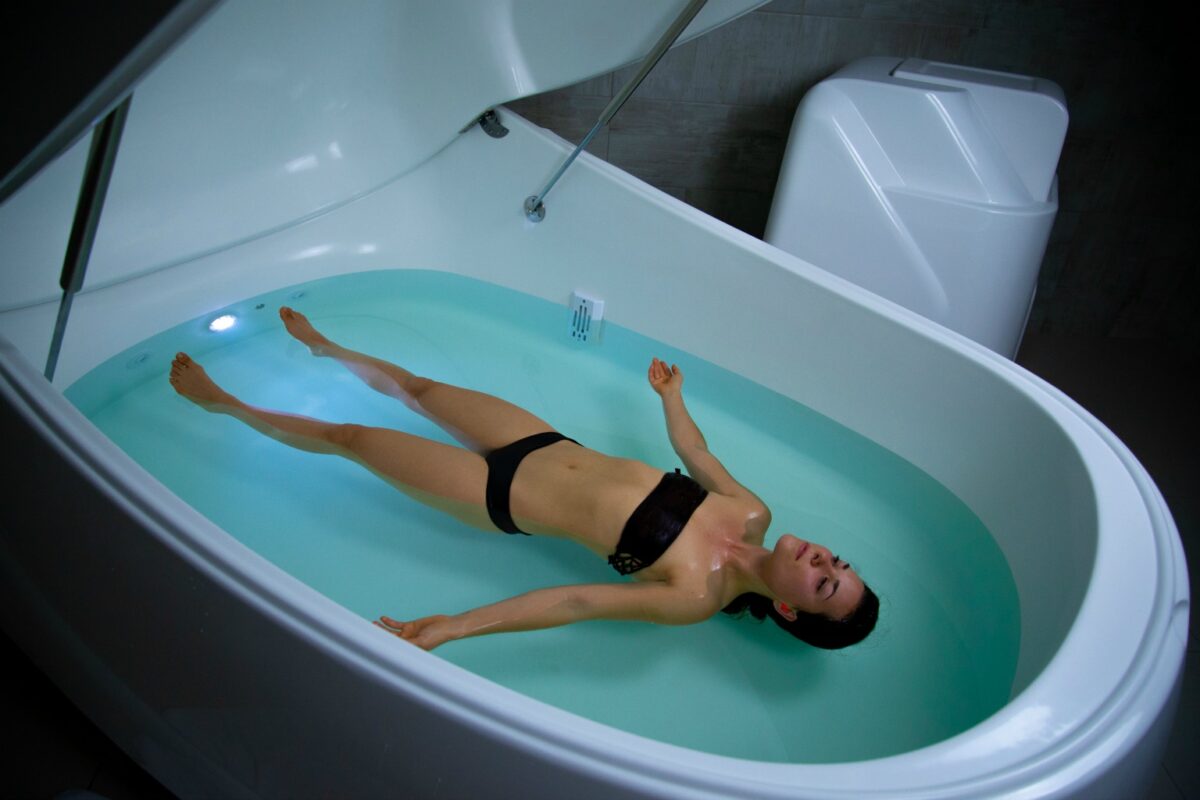 Float therapy. Sensory deprivation. Weightlessness. Back in 1980, William Hurt triggered a pop culture craze with his bizarre transformative journey in the movie Altered States. Nearly four decades later, we are seeing a new wave of float fascination—whether it’s helping Steph Curry find his focus in a TV commercial or creating a pivotal plot twist in Netflix’s Stranger Things. Floating is clearly top of mind again, and in fact, for five consecutive years now, the number of float centers has doubled in the U.S.

One person we can thank locally for that popularity surge is Andrew Dannaoui. Andrew discovered floating while living in Australia and it became his go-to way to recharge after a hard, physically demanding week. After moving to Portola Valley in 2014, Andrew was disheartened to find no float centers on the Peninsula. By the time he got through fighting traffic up to San Francisco and driving back from a session, he says, “any effects of relaxation therapy kind of disappeared.” Recognizing an opportunity, he opened Balance Float in Redwood City, one of several centers now in easy reach. If you’re intrigued by the idea of a sensory deprivation dip, here’s the lowdown from Andrew on what’s involved in going afloat.

Why is floating getting a lot of attention?

The sports and fitness industry has really understood what the benefits are and how it’s helping. For instance, you’ve seen the latest Steph Curry ad—it’s him getting into a float tank, and he also did an ESPN special talking about floating and what it does for him. Tom Brady named floating as one of the top 10 things he likes to do in Forbes Magazine, and he actually has a float tank in his house. So as these more prominent celebrities and pro athletes start to use them and talk about them, there are a lot of people catching on and realizing, “Hey, we can benefit from this too.”

So once you’ve climbed into the float pod and closed the top, what happens next?

Floating is a two-part process. The first part is the physical aspect of floating. You’re in 1,000 pounds of epsom salt in just 10 inches, 160 gallons, of water. It’s a very high concentration of epsom salt. Epsom salt is a muscle relaxant, so first of all, it’s great for muscle recovery and helps breaks down lactic acids. But the other thing is by having such a concentration of salt in the water, it creates a very high buoyancy, which also creates a zero-gravity environment, so there’s no pressure on the joints. You don’t need to know how to swim, you don’t need to know how to float; there’s so much salt that it will push you all the way to the surface without you even trying. The other part of floating is the mental part. Essentially what we’re doing is we’re shutting down the five senses to the brain. There’s no light, it’s dark, there’s no sound, there’s no touch because the water is at skin temperature, there’s no taste because you’re not eating, and there’s very little smell because it’s just salt water. So, when you shut down the five senses to the brain, it allows the brain to go into a very deep state of relaxation.

How do you get the most out of a float experience?

Floating can be used to help improve sleep quality, anxiety, depression, PTSD, back injuries and muscle recovery. It’s like meditation in a sense that it’s a practice and you get better at it. What commonly happens at the beginning when people first start floating is they get lots and lots of thoughts, so the challenge is to start quieting the mind. Usually by the 20-minute mark, the body has absorbed enough epsom salt for it to start physically relaxing you, and it also naturally helps calm the mind, so you’ll start to slow down your thoughts, you’ll start to feel more relaxed. And then usually by the second half of your float, you’ll be very relaxed, very calm. You’ll get into the theta brainwave state, that’s the state between being awake and being asleep; it’s right in the middle. We say to really understand floating, you have to have floated three times. The first time you’re kind of just getting used to the environment and understanding the sensations of what you’re feeling, the second time there’s a bit of muscle memory there and your body understands’ “I’ve been here before,” and the third time is when you get in there, and you absolutely relax.

Who are the big floaters on the Peninsula?

I would probably break it up into three groups. There is the health and fitness industry, so the pro athletes, personal trainers, that group of people. And then there are the people who are into mindfulness and meditation; that would probably be the second biggest group, and then the third biggest group is definitely the Silicon Valley people who are in highly-stressful environments and need to shut off, usually coming in at the end of the week, slowing down, getting relaxed for the weekend. We even get corporate people who come in here stuck on a problem; they go into the tank and meditate, and they come out with the answer and say, “I’ve got it, see ya!”